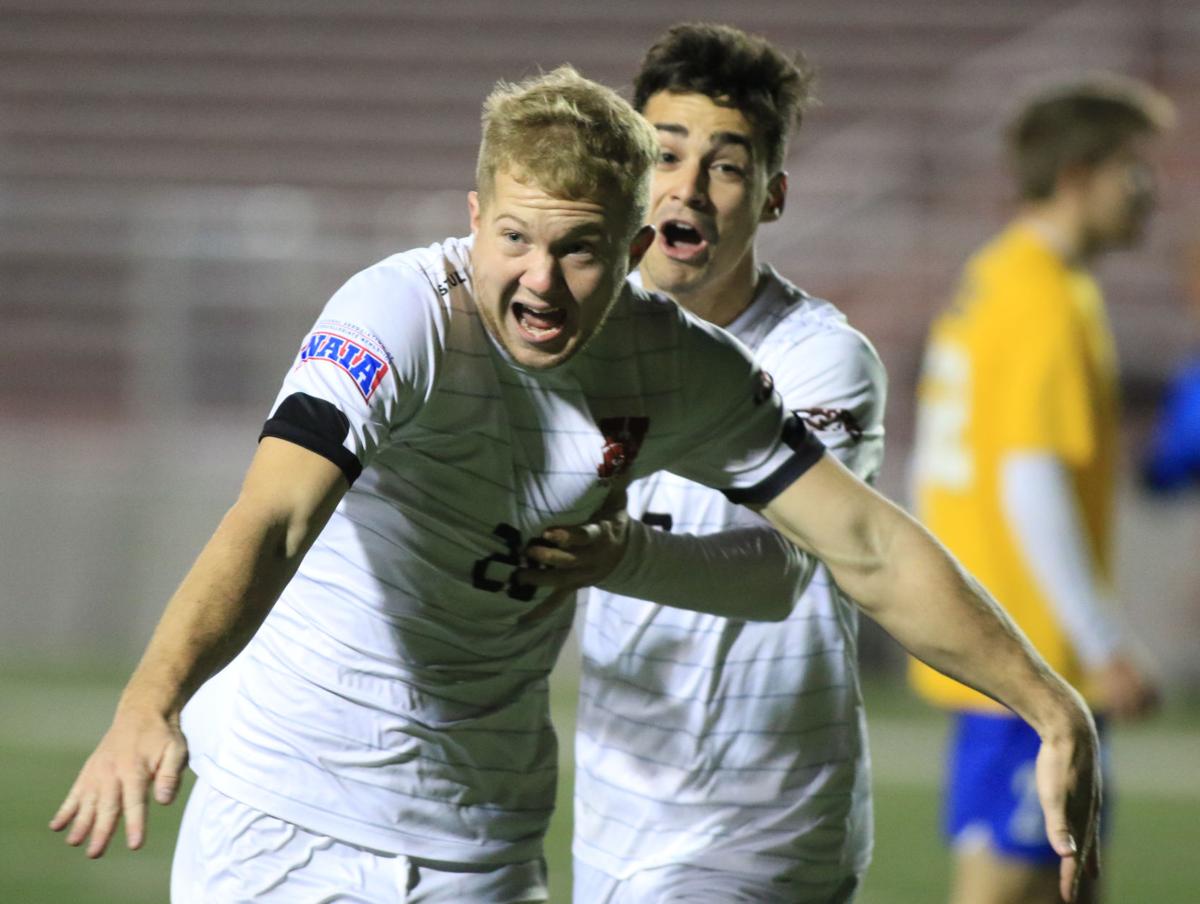 Hastings College’s Will Pointon (front) and Tyrone Madhani celebrate a goal by Pointon during the GPAC championship match Thursday at Lloyd Wilson Field. 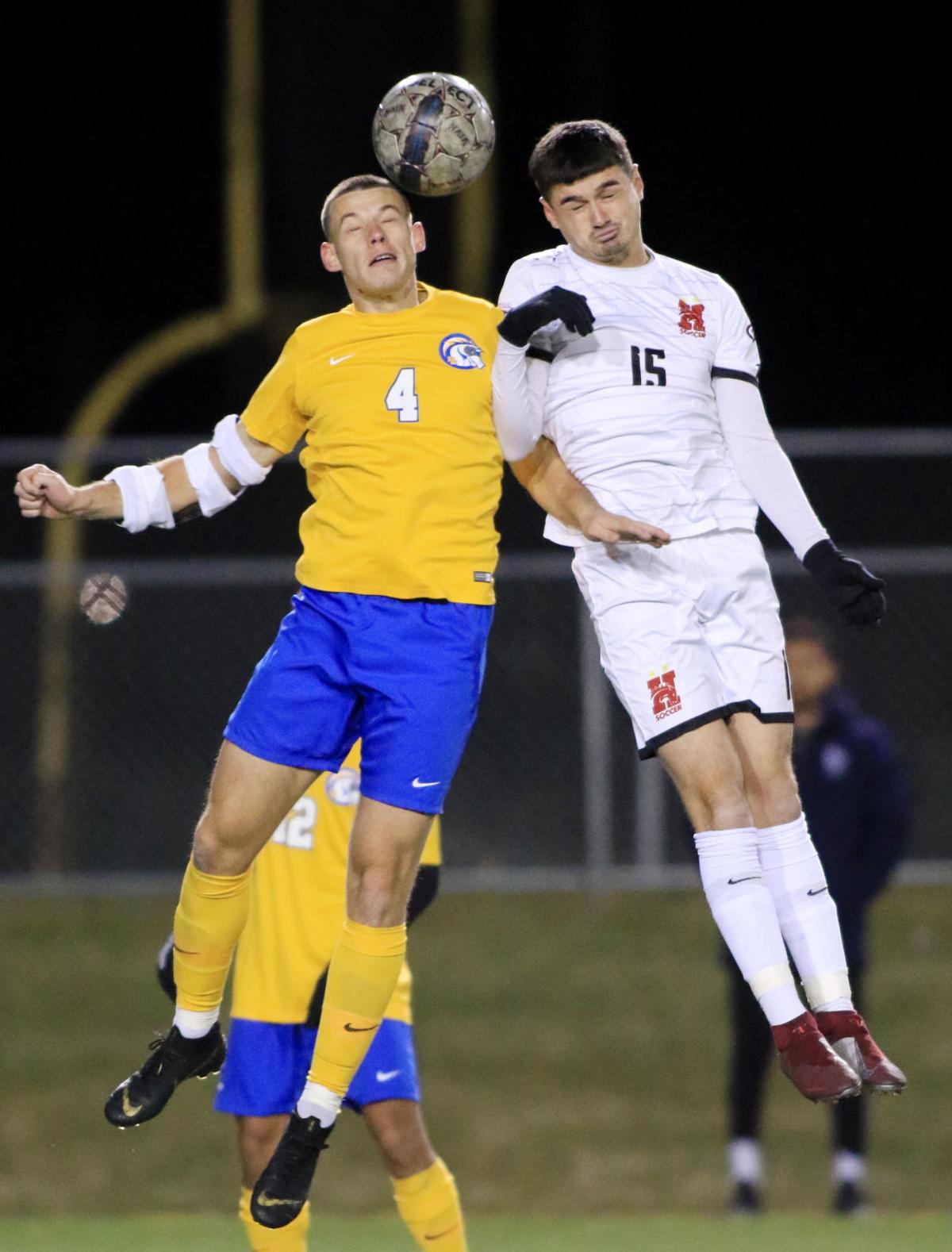 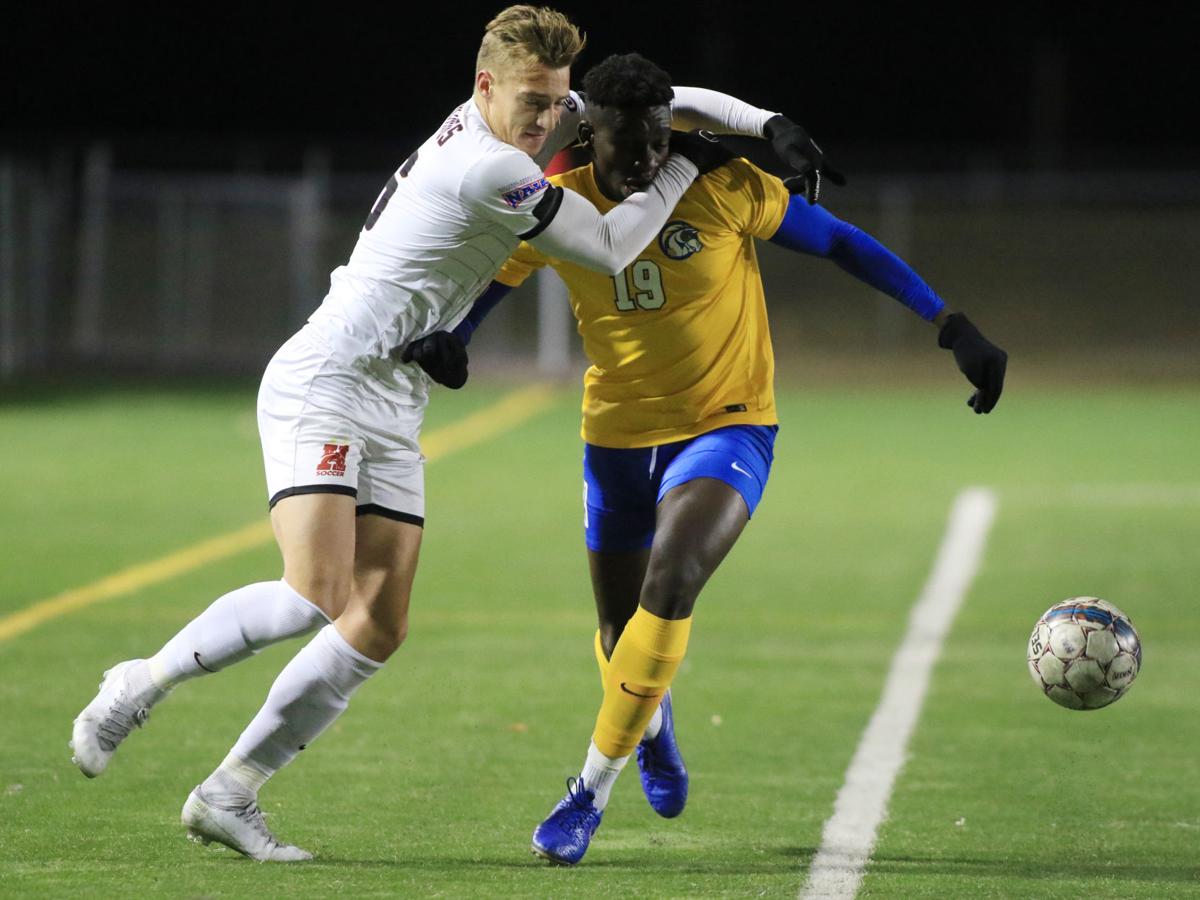 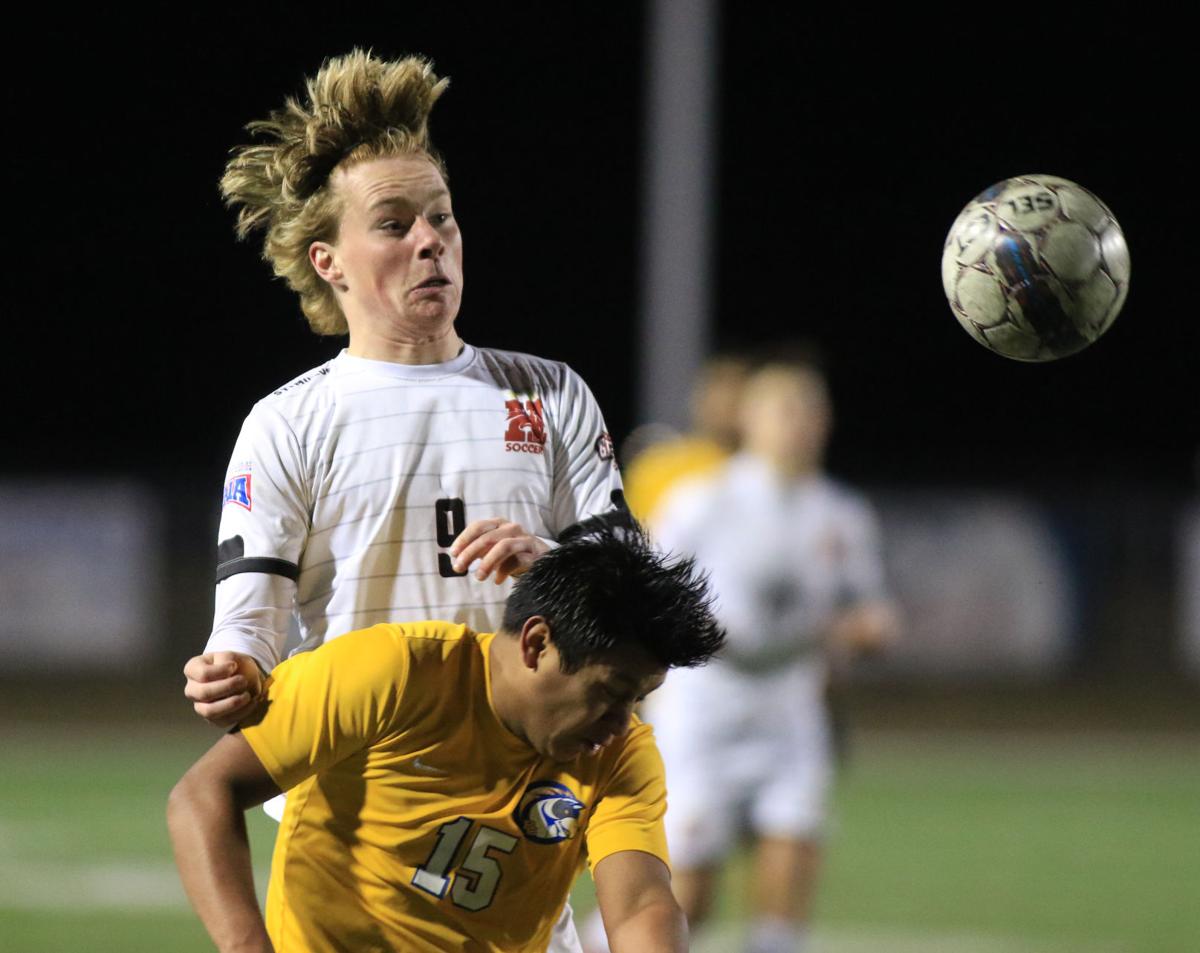 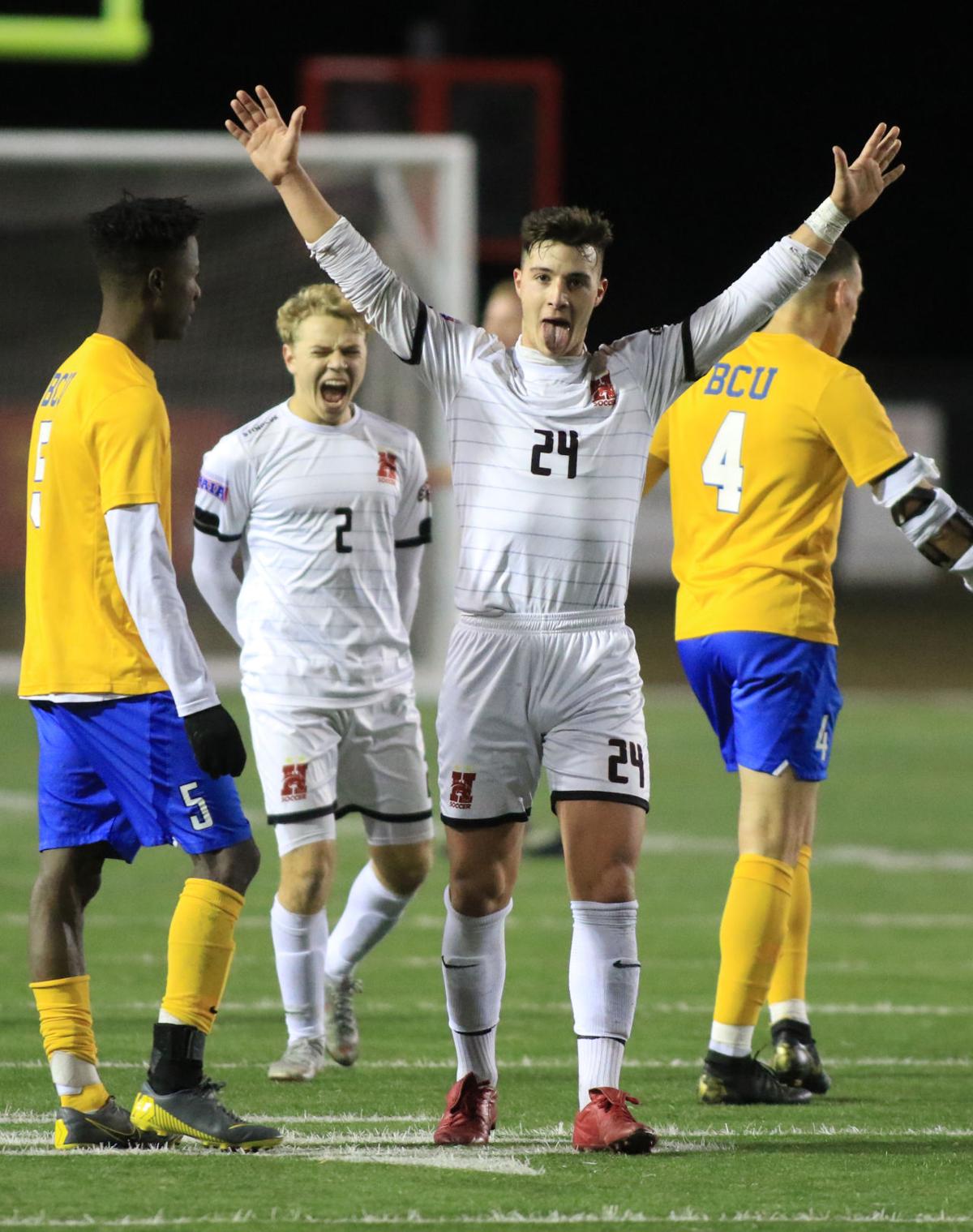 The Briar Cliff men’s soccer team has had a banner year, one that has led to its first-ever Great Plains Athletic Conference championship match. But that’s Hastings College’s game. The Broncos might as well have reservations for the conference final, as they’ve been there every year since the GPAC started.

And on Thursday, Hastings College’s dominance of the conference continued, as it won its fourth straight GPAC tournament championship, beating the Chargers 2-0.

“I’ve been here for two (of the championships), and that was definitely the toughest of those two,” said HC head coach Tim Bohnenkamp. “It’s something that’s a tradition at Hastings. We always want to make sure we’re competing at the highest level, winning titles, and going toward that next step. That’s what we accomplished (Thursday).”

“We didn’t win the regular season (title), so we had to win something as Hastings College,” said Lukas Goetz. “It’s been amazing the past years, so we had to do it again. It was very important.”

HC junior Will Pointon and Goetz, a freshman, were responsible for the only two goals in the match. Though it took until well into the second half to score the first one, the Broncos knew that one was all they needed.

“I think we always knew if we got the first goal, we were going to win the game because not many teams score on us,” Pointon said. “As soon as we got the goal, everyone, at the back especially, knew they weren’t going to score. We were confident we would see the game out.”

In the 60th minute, Broncos midfielder Callum Watson lined up for a corner kick and delivered a perfect ball into the box. That’s where Pointon high-pointed the ball and headed into the goal.

“We knew the goal was coming. We didn’t know how we were going to get it, but the way that we were playing and the pressure we were putting on them, we knew it was coming. It was a matter of being patient and waiting for that opportunity.”

Hastings had a couple more chances over the next 25 minutes, but it wasn’t until the clock showed just over 5 minutes left that the Bronco faithful could breathe a little easier.

Goetz received a pass from Watson, hesitated, and then blew right past his defender. Racing toward the goal from the right side, Goetz snuck the ball past the goalkeeper for Hastings’ second score, all but clinching the victory.

Goetz, who received a yellow card earlier in the game was so excited he started to pull of his jersey in celebration, but, knowing it would result in a red card for the freshman, his teammates wisely told him to remain fully dressed.

“Callum told me I should keep (the jersey) on because I would get a red card,” Goetz said with a laugh. “It was an amazing feeling. Everybody fought hard for it. It relieved a little pressure from all of us.”

The Chargers played two very different halves. In the opening 45 minutes, they were the aggressors, outshooting HC 11-5. But the Broncos won the shots advantage 12-2 in the second half, and Bohnenkamp attributes a lot of that to a slight defensive change.

“We made a tactical switch at halftime. We wanted our midfielders higher and meeting (the Chargers) higher so we could win the ball in a higher area,” Bohnenkamp said. “The game was played in their half. The first half they outshot us, but in the second half I don’t think they had many chances, whereas we had a lot of good opportunities. We made a good switch at halftime and the players really responded.”

Both teams met in late September, in a match that resulted in a narrow 1-0 Bronco victory. Bohnenkamp said the two matches were very similar, with both teams jockeying for control.

“Briar Cliff, I’ll give them a ton of credit. They’re a great team and they’re going to be very good in the future,” he said. “They don’t lose that many seniors and they’re not going to lose that many players, so they’re the kind of team that will be back in this position next year.”

Hastings did not win the regular season title, but capturing the tournament championship ensures the Broncos they’ll be playing in the first round of the national tournament.

Only four of Hastings’ 16 wins have been by more than three goals, which Bohnenkamp believes has mad his team battle tested. He said the Broncos are prepared for the level of competition the national tournament always brings.

“It’s been a long, hard season for the guys, and they’ve earned it,” the coach said. “I think it’s been a great year because if you look at our schedule, it’s been all battles. I think we’re as prepared as we can be for the NAIA national tournament because of games like (Thursday’s). Teams have pushed us to the brink and we’ve always responded. That’s something we take a lot of pride in as a team.”