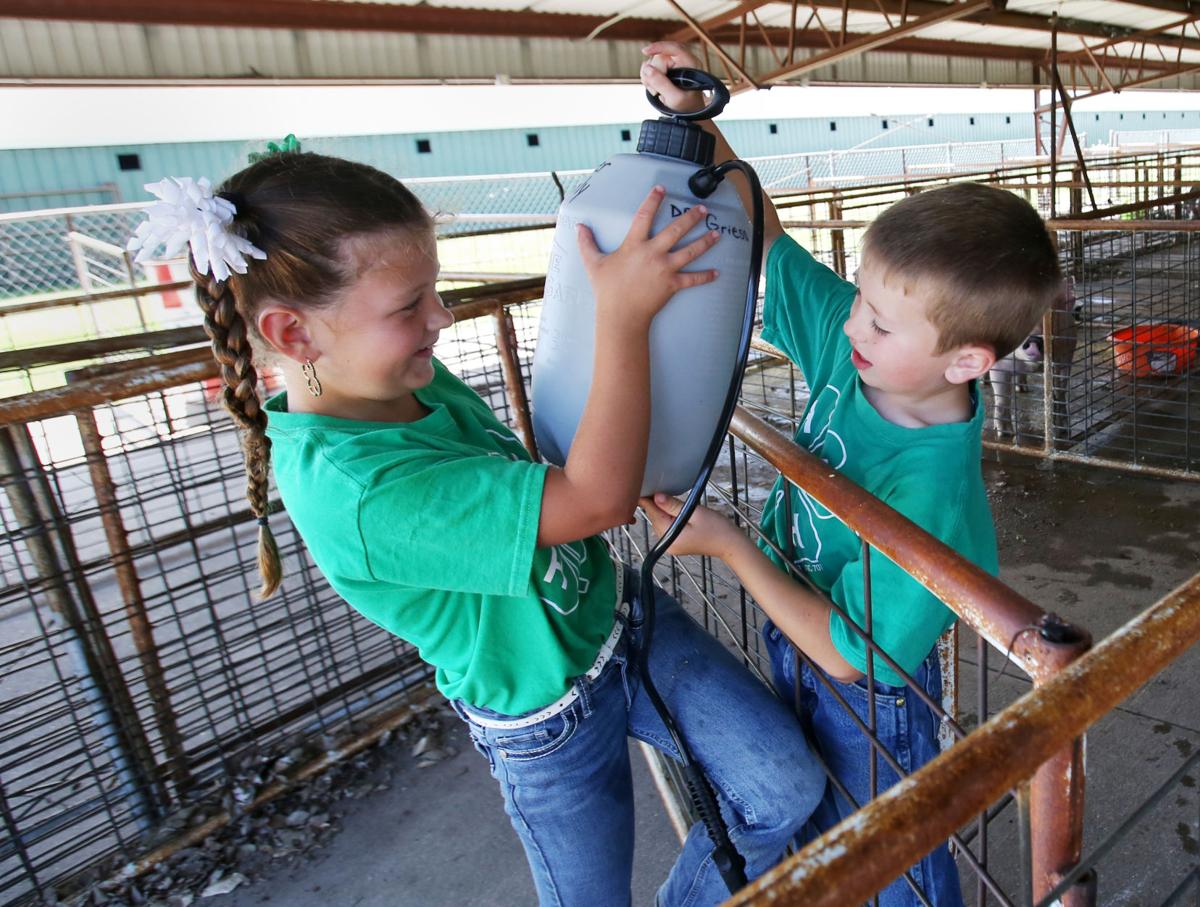 4-H Clover Kids Katelyn and Keaton Greiss work together to lift a full water sprayer out of a pig pen Saturday during the Clay County Fair swine show. 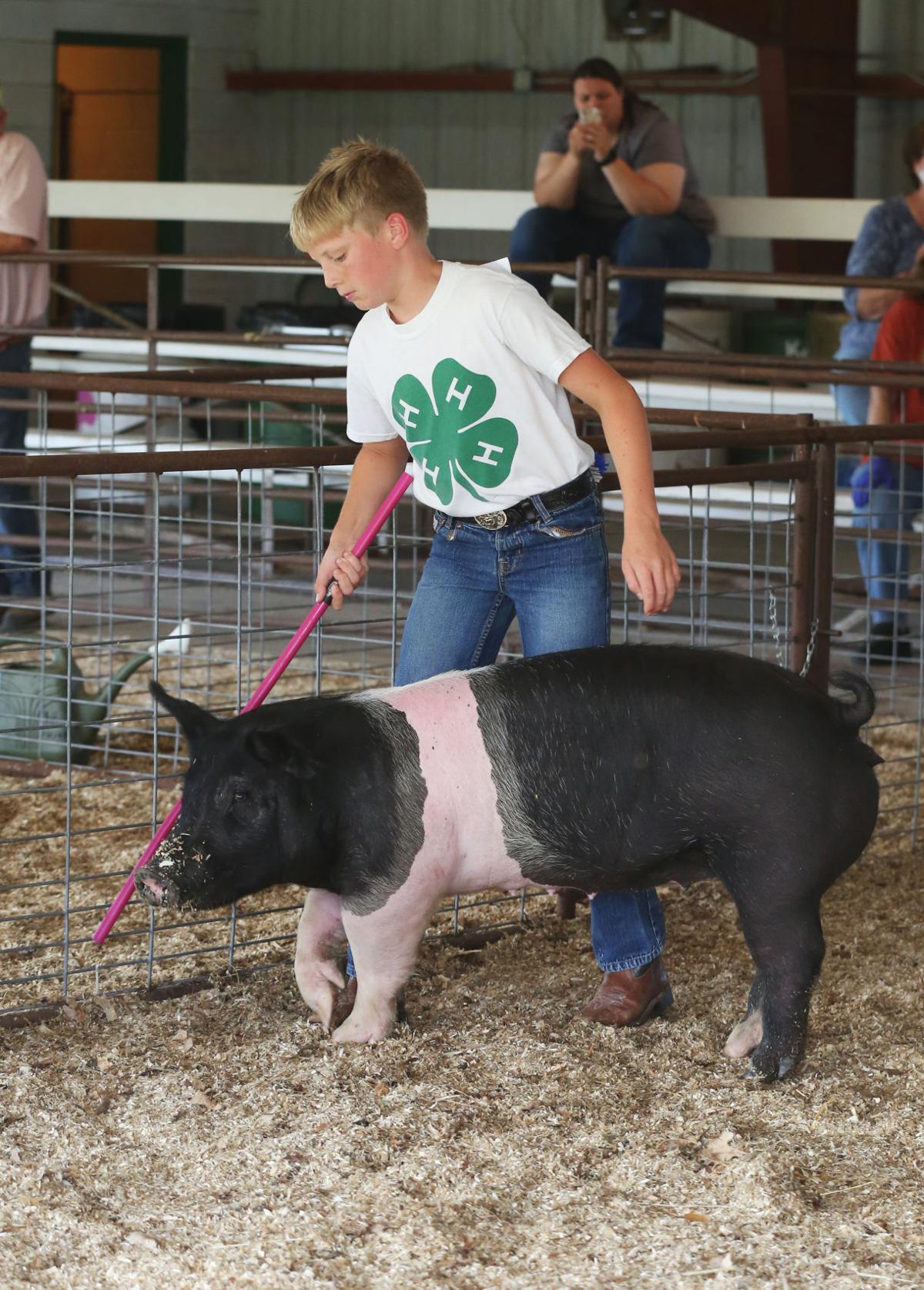 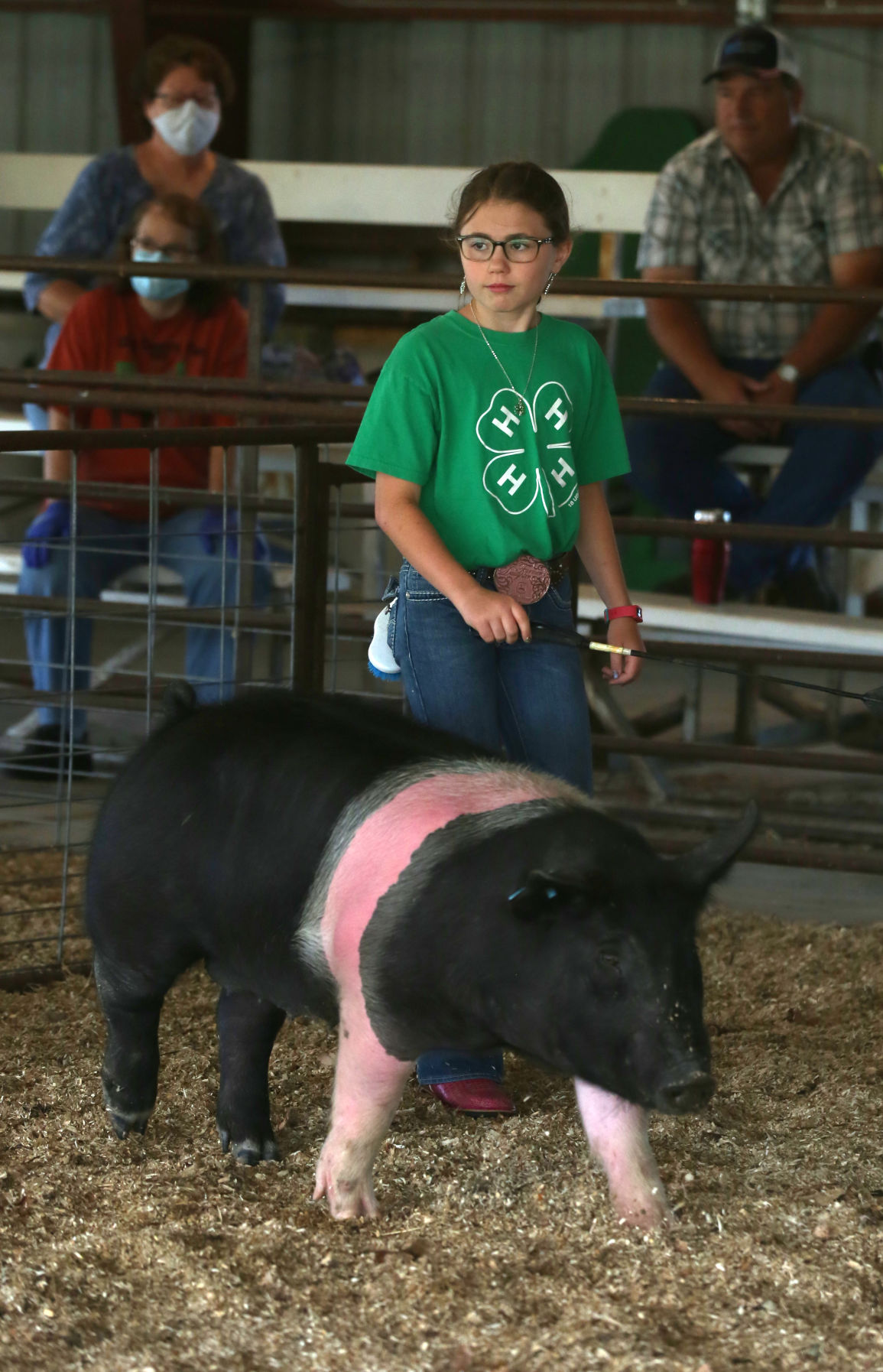 Due to health concerns from the novel coronavirus disease, COVID-19, the fair board decided to cancel most of the fair’s annual activities. Only the 4-H shows and exhibits remained on the schedule.

Deanna Peshek, office manager at the Clay County Extension Office and a fair board member, said officials devised a plan to incorporate the health protocols set out by the state. Most of the shows were held at the fairgrounds, though a few were conducted virtually online.

She said they wanted to host as many events in person as possible as a way to honor the hard work the exhibitors put into their projects leading up to the fair, especially considering the disruption as the pandemic led to the closure of schools and most other activities.

“So much had been taken away,” she said. “This certainly gives them a chance to have some normalcy.”

Setting up for the fair was different this year, as well. Some things required less prep work while others needed additional setup, such as preparing live streaming for events.

Scheduling was different, as well. Normally, Peshek said, officials would weigh animals at some point during the week since the livestock was kept at the fairgrounds. This year, weighing and other preparations had to be finished up shortly before the contestants stepped into the arena. They tried to prepare as much in advance as possible, but some aspects had to wait.

The extension office offered livestreaming of the events and added a hand sanitizer station for visitors. They had volunteers wipe down the restrooms and common touch areas every 30 minutes to an hour. Volunteers handed out water while wearing masks.

The fair started Wednesday and wrapped up on Saturday. The livestock auction was canceled this year.

Peshek thanked the participants for being flexible as they planned this year.

Changes continued even into the week of the fair.

Initially, organizers allowed each exhibitor to bring along just two adults due to directed health measures. When the health guidelines in the area changed on Monday, they were able to allow grandparents to attend, as well.

“We really appreciate that people were very tolerant and very understanding,” Peshek said. “It felt good to know we’re all in it together.”

Lily Griess, 13, of Sutton said it was different to only bring in animals right before each show. She didn’t have to bring in fans and other equipment to keep the swine at the fairgrounds for a week.

She said it was easier in some ways, but more difficult in others.

Joseph Hinrichs, 18, of Sutton said being in the arena felt much the same as years past, but everything else around the fair had changed.

“The fair doesn’t really feel like the fair,” he said.

He missed the rodeo and other activities that exhibitors participated in while they weren’t caring for their livestock.

“That’s when you get to relax and enjoy those parts of the fair,” Hinrichs said.