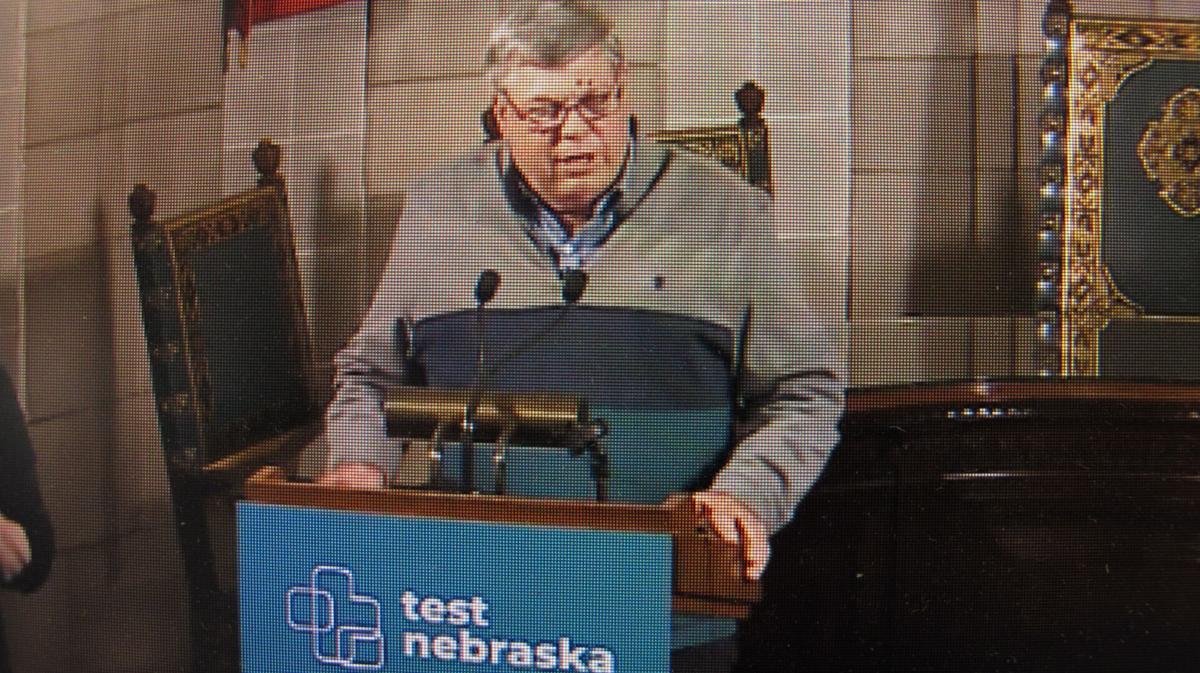 In this still photograph shot from video, Craig Buescher of South Bend speaks Tuesday about his experience with the novel coronavirus disease, COVID-19, during a news conference at the Nebraska State Capitol in Lincoln. Buescher farmed for many years in the Deweese area. 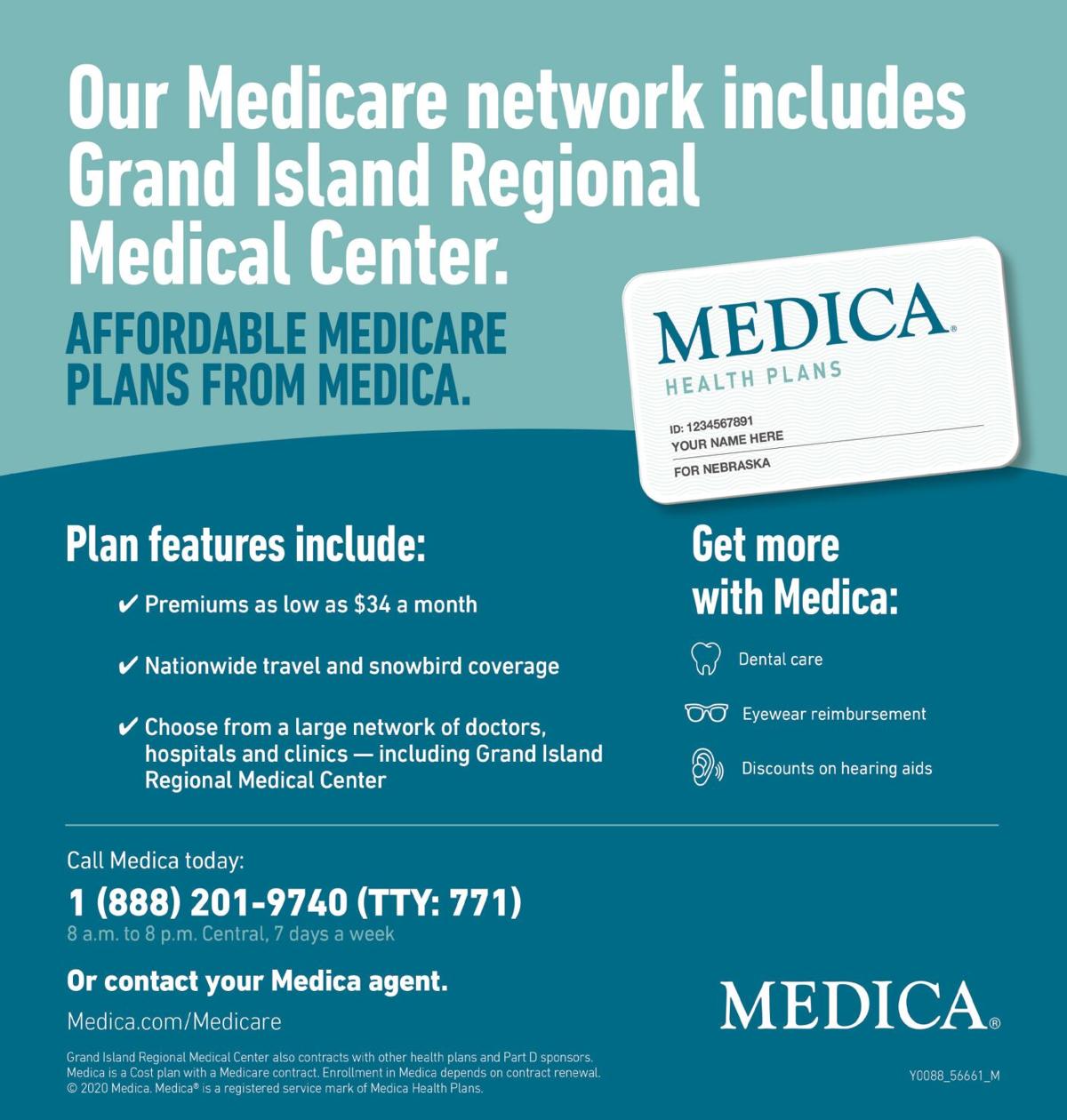 A well-known Nebraska agriculture leader with deep roots in Tribland shared his recent experience with the novel coronavirus disease, COVID-19, during a news conference with Gov. Pete Ricketts on Tuesday.

Craig Buescher, who grew up in the Deweese area and farmed there for more than three decades before relocating to South Bend a number of years ago, spent nine days in the hospital after he was confirmed positive for COVID-19 and his blood oxygen levels dropped.

He thanked Ricketts for the invitation to share his story, which he hopes will prompt others to take COVID-19 and the related public health measures seriously.

“Prior to my getting COVID, I’ll have to be honest: I didn’t necessarily take it real serious,” Buescher said. “I wore the mask most of the time, (but) I went ahead and felt that I was probably healthy enough that I could lick it — it wouldn’t be more than a cold, because some people had those symptoms and got by real well.

“After getting COVID, I’ll tell you emphatically that it’s something that made me a believer. We all need to make sure we can do things that will help (thwart) the spread.”

Buescher, 69, said his primary symptom was difficulty breathing, and that while he was hospitalized his legs were so weak that he became a fall risk.

“I’d walk around the room and get winded very easily,” he said. “My legs — I had to hang onto something.”

Buescher said he went to his doctor on Friday, Sept. 18, because of leg weakness and persistent fatigue, but at that time he had no other symptoms associated with COVID-19.

The doctor sent him home to see how the weekend played out before administering a coronavirus test. Sure enough, by Monday he was back in the clinic with a fever and difficulty breathing, and a rapid test confirmed him as positive for COVID-19.

The doctor again sent Buescher home, this time with medication and instructions to monitor his blood oxygen levels carefully. He was told to go straight to the emergency room if the levels fell below 90.

The morning of Sept. 25, Buescher’s blood oxygen levels were riding consistently around 87, so his wife Marge drove him to the hospital and he was admitted. That was at a time when hospitalization numbers related to the virus were much lower than they are now.

“I feel very fortunate I was able to get in and get a place on the COVID floor there,” he said.

Buescher developed a blood clot in his leg during his hospital stay and was put on blood thinners. He appeared at Tuesday’s news conference with a blackened left eye, which he attributed to a recent minor bump on the head that caused his thinned blood to fill the eye socket.

He said the black eye, while ugly, isn’t serious or painful — but that it is a visual reminder that the novel coronavirus, while microscopic, is real.

“I hope my testimony can encourage others to take this seriously so we can get through this epidemic,” Buescher said.

Ricketts presided at Tuesday’s news conference at the Nebraska State Capitol in Lincoln by video link, still in quarantine following a close contact with someone who subsequently tested positive for COVID-19.

Buescher joined the governor in calling on Nebraskans to practice the “3 C’s” state and local officials are promoting — avoiding close contact with non-household members, staying away from crowds, and steering clear of confined spaces with poor ventilation.

Buescher urged those hearing his message to follow the public health guidance voluntarily.

Buescher also encouraged Nebraskans to plan ahead for the upcoming weeks so they can stay connected to their families on holidays like Thanksgiving and Christmas without physically gathering in ways that could promote the spread of the virus.

Gathering virtually by such means as Zoom or FaceTime will be an unwelcome change for his own family, he said, noting that Thanksgiving is a favorite time for the Buescher clan to gather from near and far.

The times demand such sacrifices for this year, however, he said.

“We’ve got to do it this year so we have the capabilities of getting back on track next year,” Buescher said.

Buescher grew up on the family farm before attending the University of Nebraska-Lincoln, where he earned a degree in animal science. He then worked at the Senek Swine Test Station at Wymore and at the U.S. Meat Animal Research Center near Clay Center before establishing his own diversified farming operation, which included commercial alfalfa production.

For a number of years, Buescher was show manager for the Nebraska Alfalfa Marketing Association’s Mid-America Alfalfa Expo, which took place each winter on the Adams County Fairgrounds in Hastings.

Buescher is a graduate of Nebraska LEAD Program Group 5. Through the years he has been active in Catholic organizations and Republican Party politics and has made a name for himself as a motivational speaker.

Today, Buescher is a fundraising team member for the University of Nebraska Foundation, working on behalf of the Institute of Agriculture and Natural Resources at UNL.

His and Marge’s family includes son Brian, who since 2019 has been a federal district judge for the District of Nebraska.