A plane takes off at McCarran International airport, Thursday, March 19, 2020, in Las Vegas. Officials at the airport said in a tweet that it will remain open with reduced operations after an air traffic controller tested positive late Wednesday, temporarily closing the control tower. 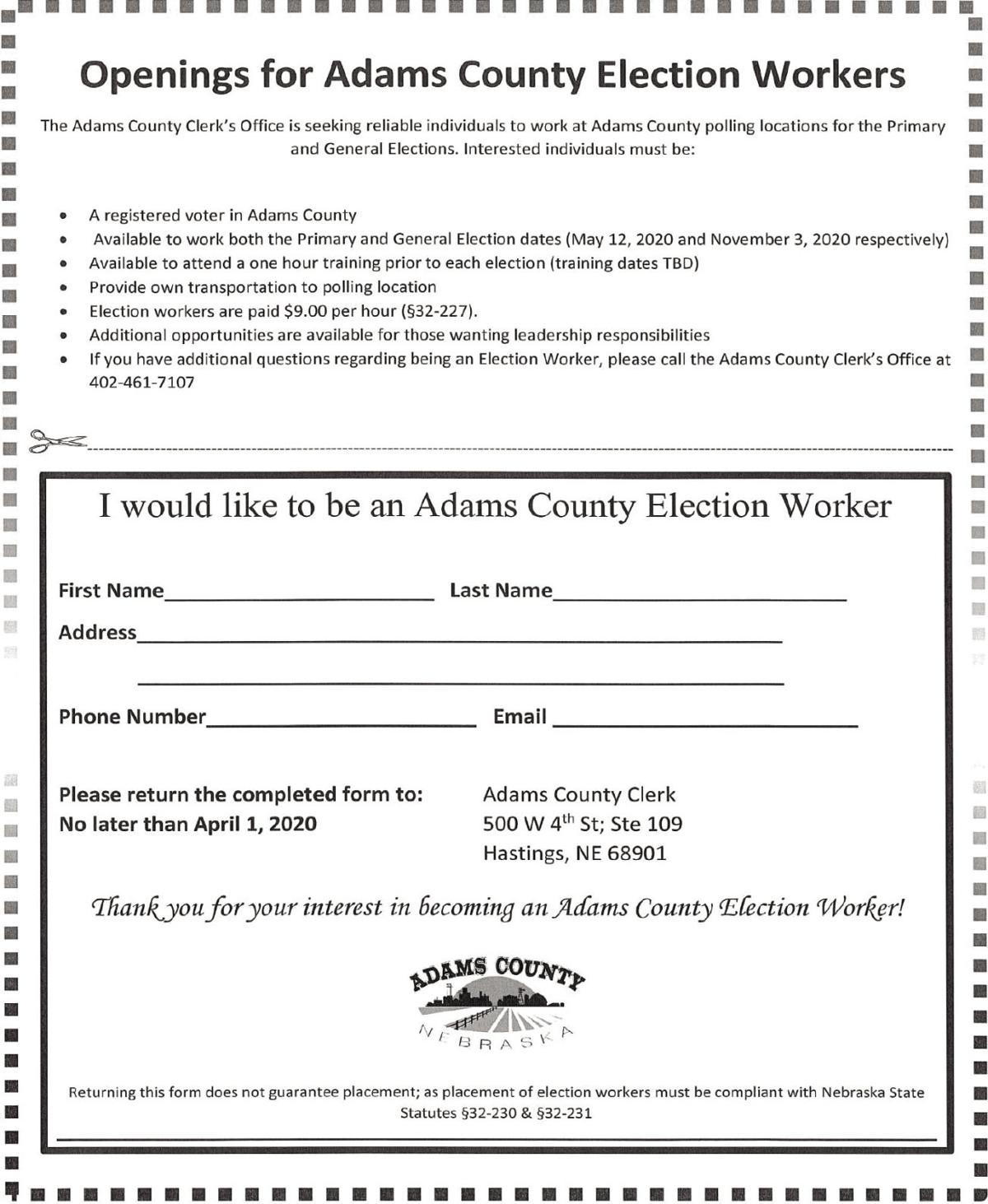 Hastings College leaders say they consulted every step of the way with public health authorities before, during and after a recent international study experience that ended last week, including on how to bring the students, instructors and other sponsors home safely.

“The communication has just been extraordinary,” said Roger Doerr, chairman of the Hastings College Board of Trustees, especially citing the college’s ongoing dialogue with leaders of Mary Lanning Healthcare and the South Heartland District Health Department. “All the health professionals in the area have been with us 100% during this entire experience.”

In all, 106 Hastings College students and sponsors set out March 2 for international study experiences in France, Spain, the United Kingdom and Ireland. The groups returned to Nebraska on March 12.

Currently, most of those students are at home with their families for spring break, self-quarantining there and monitoring themselves for fevers or other symptoms that could be associated with the novel coronavirus disease, or COVID-19.

Eleven students who were unable to go home for the break are in quarantine in campus housing, with meals and amenities being provided by the college.

Those 11 students didn’t remain on campus because they were ill, but had planned to do so all along because of various work or athletic commitments or prohibitive travel distances to go home for the break, said Susan Meeske, vice president for admissions and student engagement at HC.

Sponsors, also, are in self-quarantine at home. One, an assistant professor of teacher education in her 40s, now is self-isolating at her Hastings area residence after becoming the first confirmed case of COVID-19 in the four-county South Heartland District. The positive test was announced Wednesday evening.

The district health department said Friday it is completing a “contact investigation” in regard to the positive test, seeking to identify anyone who might have been exposed. Potential contacts include other members of the group with which the woman traveled. Close contacts are in self-quarantine, and those recommended for COVID-19 testing have been notified.

As of Friday afternoon, the health department was reporting that a total of 16 tests for COVID-19 had been administered to date in Adams, Clay, Webster and Nuckolls counties. Of those 16 tests, one had come back positive, five negative, and results for the other 10 remained pending. The Tribune doesn’t know how many of the tests administered so far may relate to Hastings College or the single positive result.

The students’ and sponsors’ 14-day self-quarantine period ends March 26. In the meantime, college officials are checking in daily with all the students and sponsors, wherever they are, and are unaware of any illness other than with the faculty member who did test positive for COVID-19. (The woman had traveled to Spain.)

In the wake of the students’ and sponsors’ return to Nebraska last week, and the subsequent news about the one positive COVID-19 test, some local residents have raised questions to the newspaper about the wisdom of the students having been taken overseas this month and the procedures followed at re-entry.

On Friday, Doerr; Meeske; Patti Kingsley, the college’s director of information technology; and Matt Fong, college associate vice president for external relations, sat for a group interview with the Tribune via telephone to discuss how the travel experience went and how decisions were made during a tumultuous time in the world.

“I do think there are a lot of misconceptions,” Meeske said.

Effective with this academic year, Hastings College has implemented a new academic program known as “2.0,” which includes a block scheduling regime.

In the fall and spring semesters in the 2019-20 academic year, HC students have ventured to Peru, Ireland, Spain, France, the United Kingdom and Canada. Travel arrangements for the spring travel block had been settled for quite some time.

“This was planned months ago,” said Doerr, who as HC board chairman has assumed an administrative role following the March 2 departure of College President Travis Feezell. “We had it planned last summer, actually.”

Anticipating the upcoming travel in March, faculty members had traveled to the destination countries by January to make sure all the arrangements were suitable, safe and in place, he said.

Doerr, a Hastings resident and retired longtime HC business professor who also served a stint as president of the Hastings College Foundation, took the reins as board chairman on Feb. 18. About that same time, the coronavirus problem was becoming a greater and greater concern in locations outside of China that included Italy.

Doerr said college officials began having daily reviews of the upcoming travel situation Feb. 20 or 21 and conferred extensively with state and local officials.

The determination, he said, was that as the departure date approached, there was no real reason the students should not travel to the planned destinations.

The main point of reference, he said, was the Level 1 Travel Advisory from the U.S. government then in effect for the countries in question. Level 1 indicates taking normal precautions.

While the groups were abroad, a Level 2 Travel Advisory was put into place based on the public health threat. Then, on March 12 — the same day the students returned to the United States — both France and Spain were moved up to a Level 3 advisory, which means to avoid non-essential travel.

“At Level 3, the concern goes up significantly,” Doerr said.

(Ireland and the United Kingdom were added to the Level 3 designation on March 15.)

Because of world uncertainty over the coronavirus issue, Doerr said, college officials back home in Hastings were monitoring the situation abroad at all hours of the day and night, checking in constantly with the group leaders overseas and asking about any health problems group members were experiencing.

“They were being continually apprised of every bit of information,” Doerr said.

Students had been given a chance to back out of the travel experience without penalty, but in the end only one did so, the college leaders said, and they believe it was for a reason other than the coronavirus threat.

“We really tried to be mindful of any concerns they would have or their parents would have,” Doerr said.

The leaders said they are aware of only one student who became ill during the trip. That student visited a clinic, tested positive for influenza, self-isolated for a time and had fully recovered before returning home.

While the travelers in Spain did modify their itinerary because of virus concerns, Meeske said, those in the other countries did not. The students visiting France were in Lyon in the south of France, which wasn’t a “hot spot” for the illness.

With the novel coronavirus seemingly on the move in western Europe, the college leaders said, they discussed the possibility of bringing the traveling groups home early but would have been unable to do so without breaking up the groups and having students re-entering the United States on numerous flights and passing through various airports.

“Logistics were secondary,” Meeske said. “Our primary concern was the health and safety of our students.”

“Keeping the groups intact and knowing we had plane reservations that were intact was reassuring,” Doerr said.

In the end, all students made it home on schedule and on their originally planned flights. (One subgroup that had been scheduled to overstay the rest of the HC contingent did return at the same time as everyone else, so earlier than planned.)

On arrival back in Nebraska, all the students were given printed instructions for self-reporting their travel to the state of Nebraska, guidelines for monitoring their health and social distancing at home, and what to do in the event they became ill in the coming days. Self-quarantine was recommended for students coming from Level 3 countries.

Some students were picked up at the airport by their families, while the rest returned to Hastings on four charter buses. All the students who had been in one country traveled together on the same bus.

Back on campus, the students who planned to head home the following day were allowed to spend the night on the lower level of one residence hall, which had been prepared for their arrival. The next day, college staff helped the students gather their belongings for the trip home.

The rest of the student body had been dismissed for spring break a day early to prevent intermingling with students who had traveled abroad.

“I think it was for the health and safety of both populations of students,” Meeske said.

She complimented the college staff for the care and attention being paid to the students still on campus in quarantine, who are having meals and snacks delivered to them and have access to amenities like a gaming system.

“The team has done an excellent job making sure the students are as comfortable as possible in extenuating circumstances,” she said.

Doerr said the students still on campus seem to be doing well, and that in conversations with various students and families who traveled this month he is getting positive feedback.

“What I’m hearing is nothing but ‘thank you’ from parents,” he said. “ ‘Thank you for handling it so well. We appreciated the way you treated our kids.’ ”

Hastings College classes will resume online on Monday and continue that way for the balance of the semester.