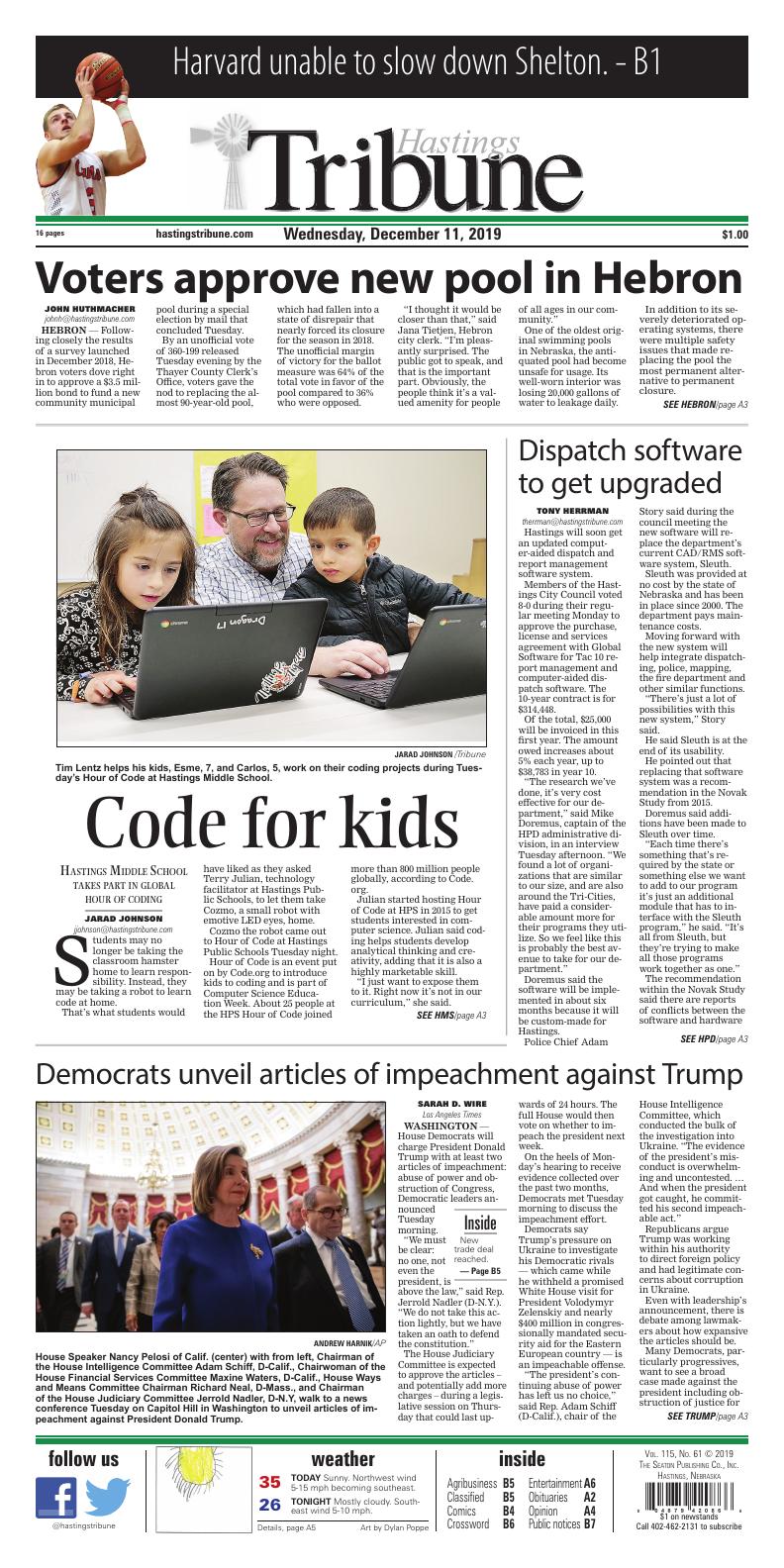 HEBRON — Following closely the results of a survey launched in December 2018, Hebron voters dove right in to approve a $3.5 million bond to fund a new community municipal pool during a special election by mail that concluded Tuesday.

By an unofficial vote of 360-199 released Tuesday evening by the Thayer County Clerk’s Office, voters gave the nod to replacing the almost 90-year-old pool, which had fallen into a state of disrepair that nearly forced its closure for the season in 2018. The unofficial margin of victory for the ballot measure was 64% of the total vote in favor of the pool compared to 36% who were opposed.

“I thought it would be closer than that,” said Jana Tietjen, Hebron city clerk. “I’m pleasantly surprised. The public got to speak, and that is the important part. Obviously, the people think it’s a valued amenity for people of all ages in our community.”

One of the oldest original swimming pools in Nebraska, the antiquated pool had become unsafe for usage. Its well-worn interior was losing 20,000 gallons of water to leakage daily.

In addition to its severely deteriorated operating systems, there were multiple safety issues that made replacing the pool the most permanent alternative to permanent closure.

Spider cracking in the deck, an uneven deck slope, reductions in electrical and mechanical functionality, and worn-out slide tower were among the many failings identified that prompted city officials to call for its replacement, closure or renovation.

Results of a citizen survey launched in December 2018 showed 76 percent of the nearly 500 people who responded supported the building of a new pool.

A popular destination location for decades, the pool had provided a place for area children to learn water safety and stay cool during the hot summer months.

It was considered a quality-of-life amenity that has long attracted new families to settle here.

City Councilwoman Rita Luongo is one of three city council members — along with Kyle Timmerman and Tim Peckering — serving on the facilities committee that oversees parks and recreation and other city facilities.

Luongo said the city expects to secure additional funding for the project now that it has received voter approval.

She said that at least $500,000 of the bond obligation could be offset by private funding through grants.

Tietjen said the city will begin the process of applying for bonds as soon as Wednesday once the results are made official by the county clerk’s office.

“Some grants are due in January, so that will be the top priority: To get funding to offset the cost,” she said.

Prior to the election, an open house was held at the Hebron Activity Center on Nov. 20 to educate residents about the proposed improvements to the pool.

Tietjen said public input still is invited to solidify the proposed pool design concept model developed with community survey data that was on display at the open house.

The $3.5 million bond contains a 15-year sunset clause. Funding for the pool will come primarily from two sources: Property taxes and an increase in the city sales tax from 1% to 1.5%.

City officials said the grants and sales tax increase were included in the bond proposal as a way of easing the burden on property owners.

Prior to the election, Mayor Doug Huber had expressed support for the pool in city literature.

Tim Lentz helps his kids, Esme, 7, and Carlos, 5, work on their coding projects during Tuesday’s Hour of Code at Hastings Middle School.

Students may no longer be taking the classroom hamster home to learn responsibility. Instead, they may be taking a robot to learn code at home.

That’s what students would have liked as they asked Terry Julian, technology facilitator at Hastings Public Schools, to let them take Cozmo, a small robot with emotive LED eyes, home.

Cozmo the robot came out to Hour of Code at Hastings Public Schools Tuesday night.

Hour of Code is an event put on by Code.org to introduce kids to coding and is part of Computer Science Education Week. About 25 people at the HPS Hour of Code joined more than 800 million people globally, according to Code.org.

Julian started hosting Hour of Code at HPS in 2015 to get students interested in computer science. Julian said coding helps students develop analytical thinking and creativity, adding that it is also a highly marketable skill. 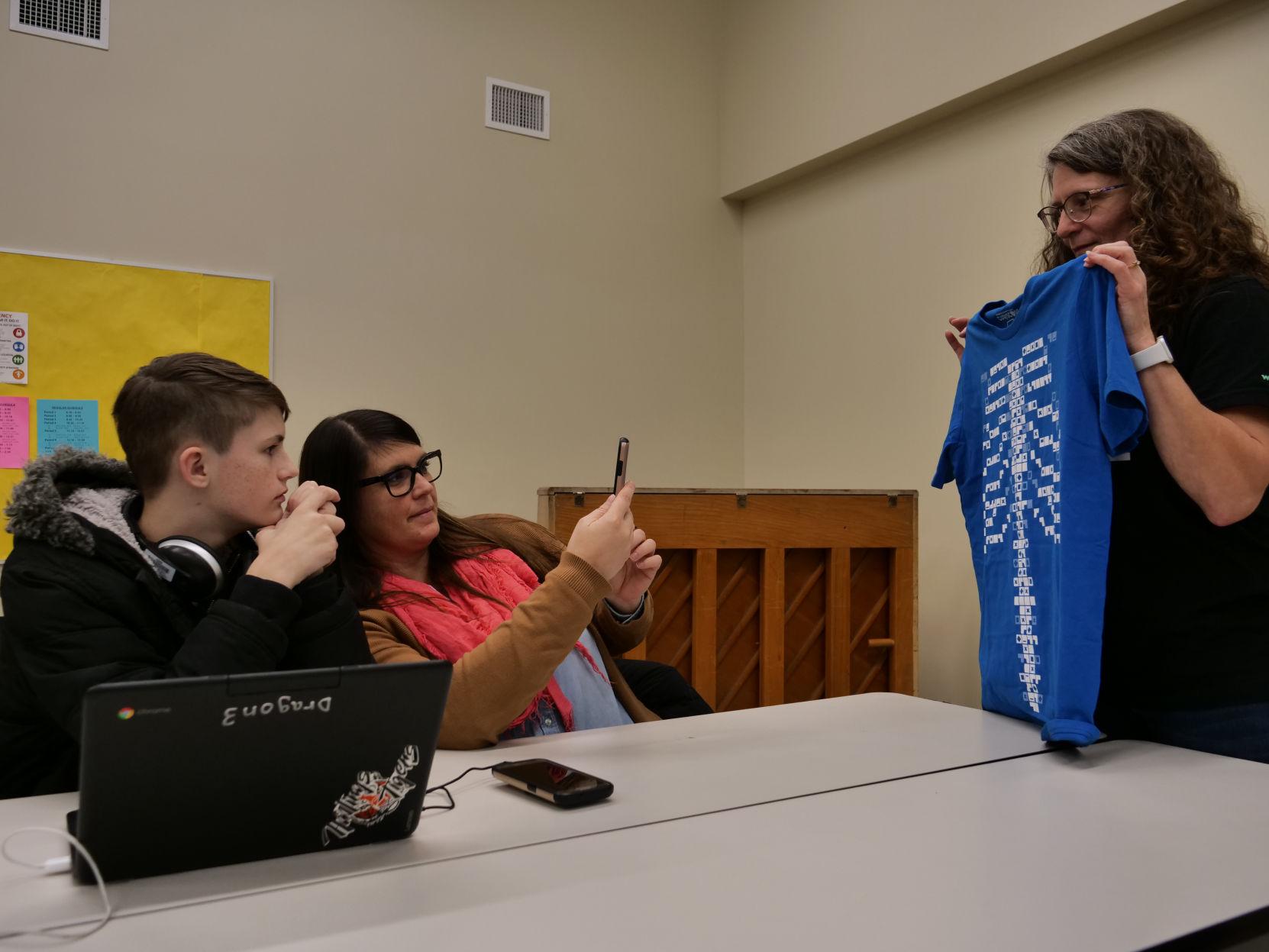 Terry Julian, technology facilitator at Hastings Public Schools, holds up a T-shirt for seventh-grader Camden Mullen and his mom, Julie Mullen, to look at an augmented reality human body through a phone app. Julian brought the shirt to the Hour of Code Tuesday at the Hastings MIddle School to show some of the things coding can do.

“I just want to expose them to it. Right now it’s not in our curriculum,” she said.

The majority of students and parents worked on activities through the Hour of Code website. Students did activities to teach a superhero how to fly and fight crime, or create an app to make a landmark tour.

Willa Kleeb, a third-grader, pulled her dad, Scott Kleeb, to the laptop where she had coded a group of animals to dance to the song “Old Town Road.”

Most of the coding activities were designed to feel like games, rather than a lesson. Students had to accomplish the goals of the game by learning how to code. Julian said that sense of playing a game gets kids excited about computer science.

Scott’s other daughter Maya, a sixth-grader, was playing with Cozmo. Maya was trying to program Cozmo to pick up a stack of blocks.

Whenever the stack of blocks collapsed, Cozmo would spin around and make a sound similar to a fire truck. Maya had a little more experience than her younger sister, having been a part of coding club for two years.

Scott said he was happy to see his daughters learn to code. He said the skills they learn in computer science go beyond programming a robot, and help them grow intellectually. The skills from coding could also be used to get a job in computer science.

“That fun can become productive and profitable,” Scott said.

Cozmo and Ozobot, another robot at the Hour of Code event, were purchased through Girls Who Code, a club at HPS for students of all genders to learn to code.

Al Kleeb, Maya and Willa’s grandfather, was at the Hour of Code event. He recalled when computers were as big as a room and the majority of computer scientists were male. He said he is glad to see girls being actively encouraged to try coding, especially at a young age.

“It’s exciting and refreshing. We have all this energy,” Al said. “Back then, we were cutting out half the population.” 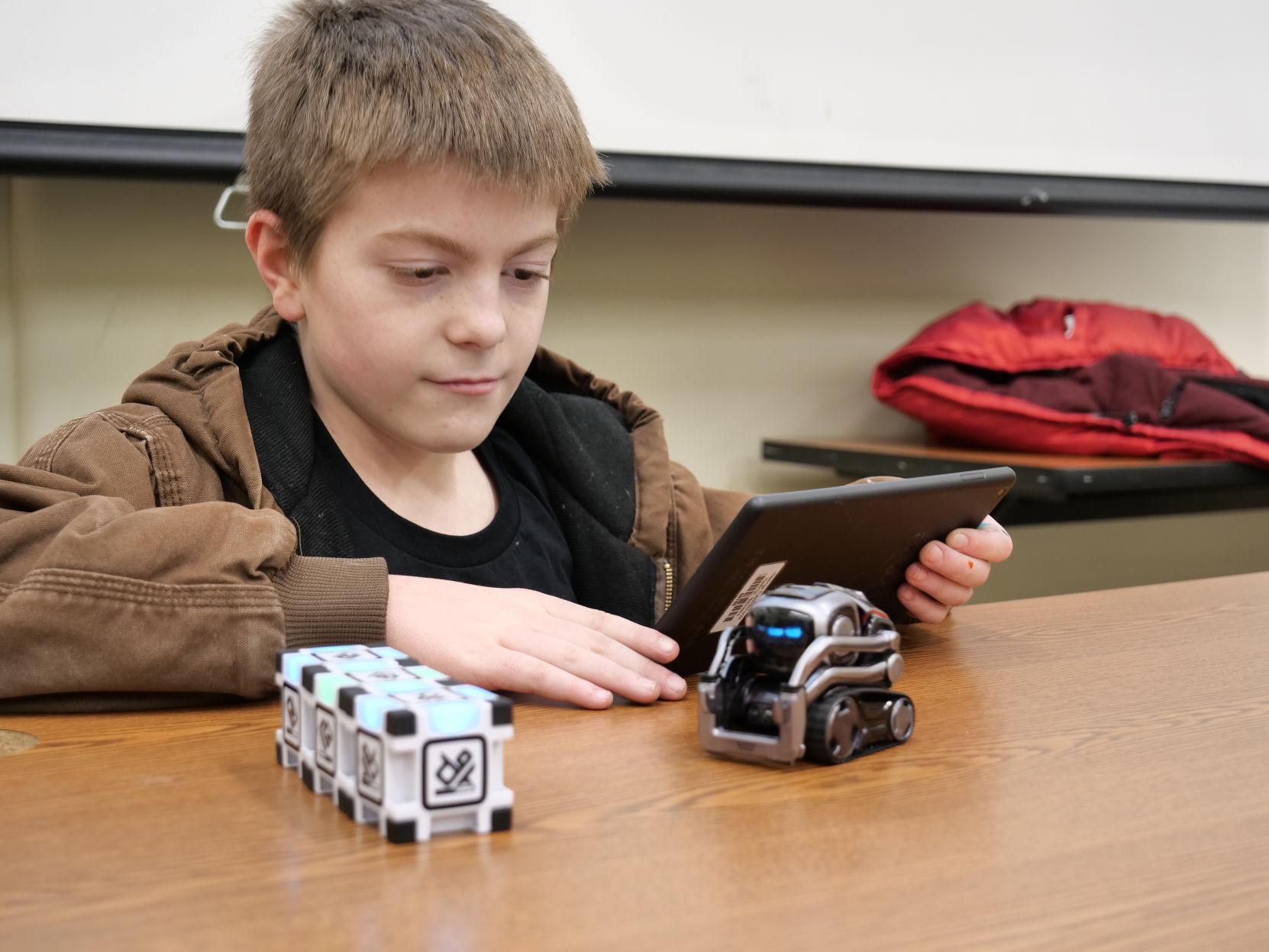 Brittan Woods teaches the robot, Cozmo, to pick up and move blocks Tuesday during the Hour of Code at Hastings Middle School.

Julian said there are a lot of resources that kids can use at home or at school. She said in 2015, the activities on the Hour of Code website had only a few activities. Now, there are over 100.

“I’m glad that people have taken the time to make these things that the kids can use,” she said.

Julian said she considers this year’s Hour of Code a success after seeing the students and parent’s reaction to it.

“I love to see the excitement. I never know exactly what they’re going to think of it but usually people walk away pretty excited,” Julian said.

Hastings will soon get an updated computer-aided dispatch and report management software system.

Members of the Hastings City Council voted 8-0 during their regular meeting Monday to approve the purchase, license and services agreement with Global Software for Tac 10 report management and computer-aided dispatch software. The 10-year contract is for $314,448.

“The research we’ve done, it’s very cost effective for our department,” said Mike Doremus, captain of the HPD administrative division, in an interview Tuesday afternoon. “We found a lot of organizations that are similar to our size, and are also around the Tri-Cities, have paid a considerable amount more for their programs they utilize. So we feel like this is probably the best avenue to take for our department.”

Doremus said the software will be implemented in about six months because it will be custom-made for Hastings.

Sleuth was provided at no cost by the state of Nebraska and has been in place since 2000. The department pays maintenance costs.

Moving forward with the new system will help integrate dispatching, police, mapping, the fire department and other similar functions.

“There’s just a lot of possibilities with this new system,” Story said.

He said Sleuth is at the end of its usability.

He pointed out that replacing that software system was a recommendation in the Novak Study from 2015.

Doremus said additions have been made to Sleuth over time.

“Each time there’s something that’s required by the state or something else we want to add to our program it’s just an additional module that has to interface with the Sleuth program,” he said. “It’s all from Sleuth, but they’re trying to make all those programs work together as one.”

The recommendation within the Novak Study said there are reports of conflicts between the software and hardware systems and it can be awkward to work with and reports are difficult to complete; mobile applications are lacking; the system requires a significant amount of upkeep and updates are time-consuming.

“It’s kind of cumbersome to make sure all that data is transferred from program to program,” Doremus said. “This is supposed to alleviate those issues we have.”

While Sleuth has become cumbersome, the system has been in place for many years and police department staff members are familiar with it.

Despite the familiarity with Sleuth, Doremus said most officers are looking forward to the new program.

“With any new software or any program you’re going to have some type of growing pains,” he said. “I think the majority of officers are looking forward to a new program — something that’s up to date with how policework is being done right now. It’s not something that was developed 20-plus years ago.” 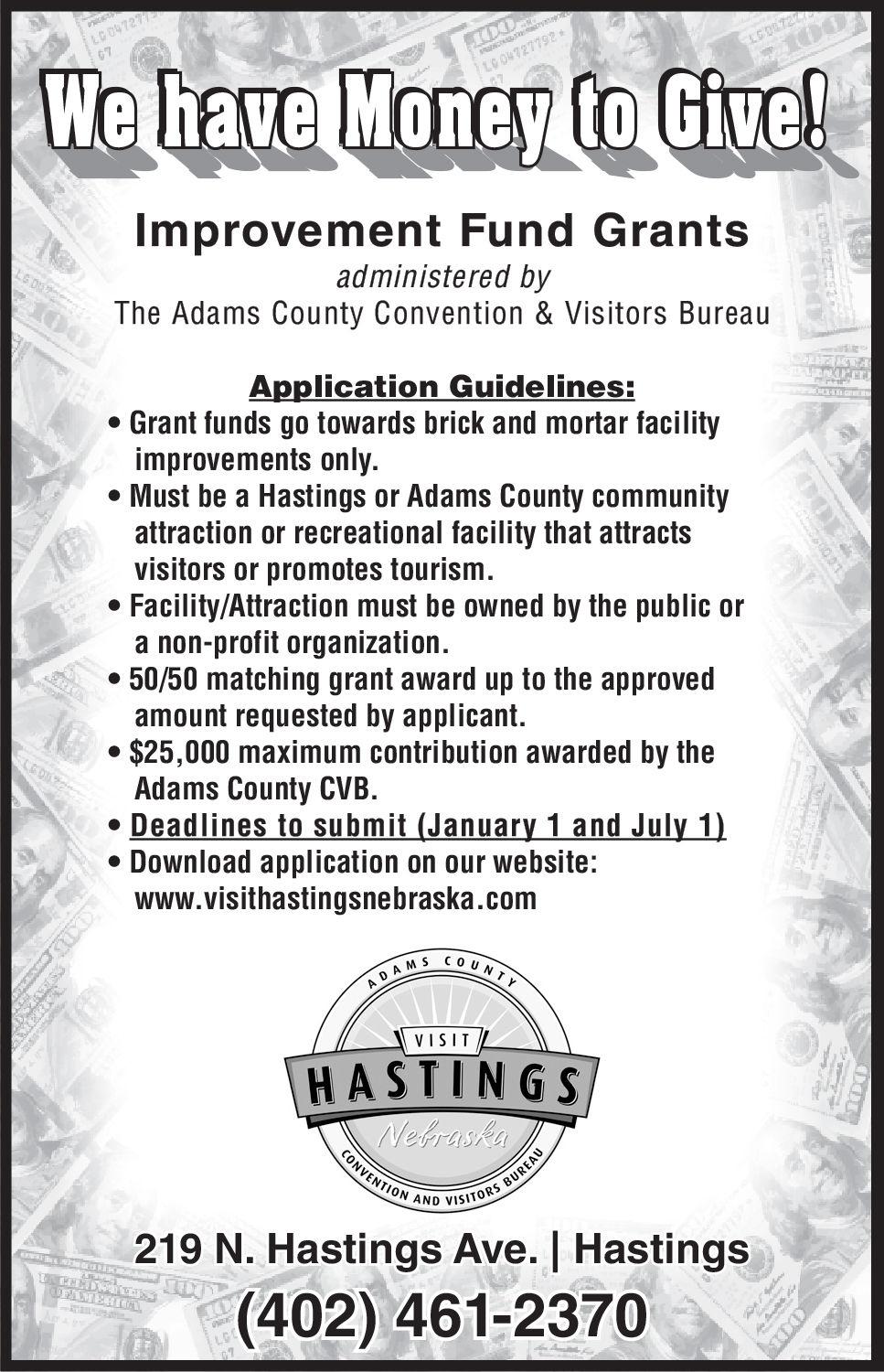 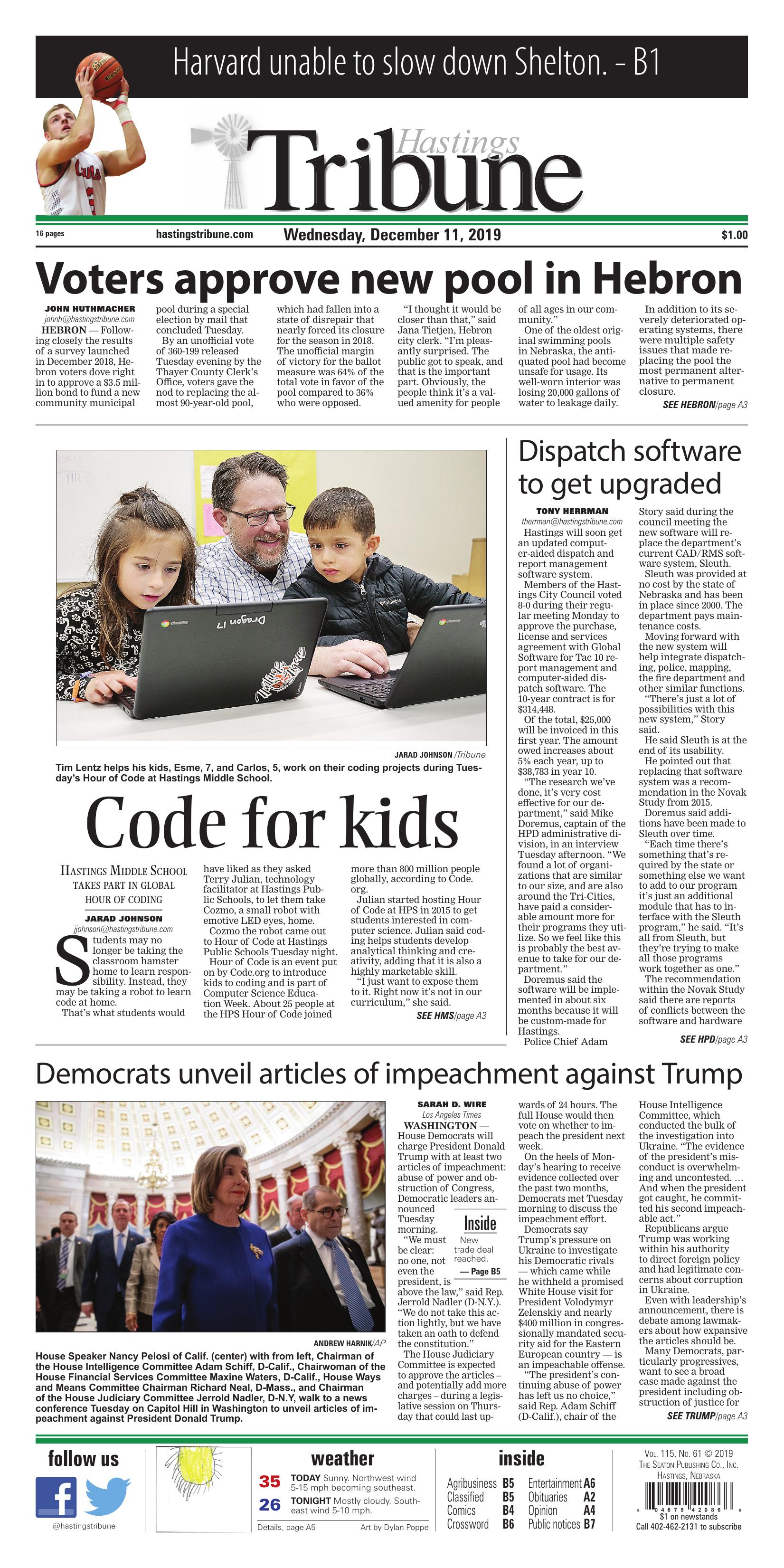