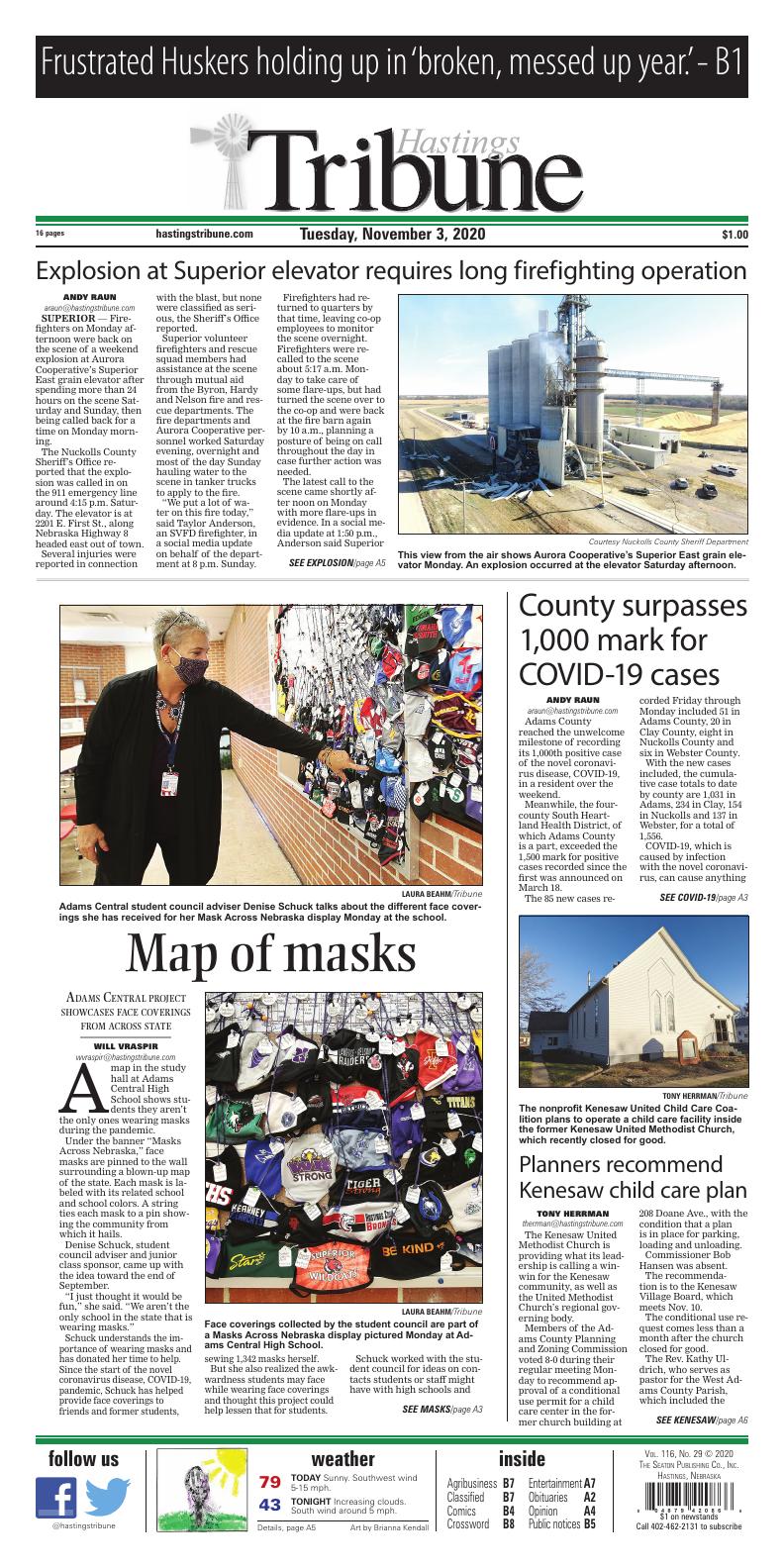 SUPERIOR — Firefighters on Monday afternoon were back on the scene of a weekend explosion at Aurora Cooperative’s Superior East grain elevator after spending more than 24 hours on the scene Saturday and Sunday, then being called back for a time on Monday morning.

The Nuckolls County Sheriff’s Office reported that the explosion was called in on the 911 emergency line around 4:15 p.m. Saturday. The elevator is at 2201 E. First St., along Nebraska Highway 8 headed east out of town.

Several injuries were reported in connection with the blast, but none were classified as serious, the Sheriff’s Office reported.

Superior volunteer firefighters and rescue squad members had assistance at the scene through mutual aid from the Byron, Hardy and Nelson fire and rescue departments. The fire departments and Aurora Cooperative personnel worked Saturday evening, overnight and most of the day Sunday hauling water to the scene in tanker trucks to apply to the fire.

“We put a lot of water on this fire today,” said Taylor Anderson, an SVFD firefighter, in a social media update on behalf of the department at 8 p.m. Sunday.

Firefighters had returned to quarters by that time, leaving co-op employees to monitor the scene overnight. Firefighters were recalled to the scene about 5:17 a.m. Monday to take care of some flare-ups, but had turned the scene over to the co-op and were back at the fire barn again by 10 a.m., planning a posture of being on call throughout the day in case further action was needed.

The latest call to the scene came shortly after noon on Monday with more flare-ups in evidence. In a social media update at 1:50 p.m., Anderson said Superior and neighboring fire departments once again would be trucking water onto the elevator premises and asked motorists to avoid the area if possible.

No information about the explosion itself yet had been released, as the matter was under investigation by the Nebraska State Fire Marshal’s Office, Anderson said.

She expressed gratitude to local businesses and individuals for donations of food, coffee and other provisions for the emergency responders throughout the long call, and to the fire and rescue auxiliary for coordinating all that help.

The value and importance of mutual aid is evident in a situation like the one continuing to unfold in Superior, Anderson said.

“It’s really nice to have those relationships with the other departments to keep us going,” she said.

Adams Central student council adviser Denise Schuck talks about the different face coverings she has received for her Mask Across Nebraska display Monday at the school.

A map in the study hall at Adams Central High School shows students they aren’t the only ones wearing masks during the pandemic.

Under the banner “Masks Across Nebraska,” face masks are pinned to the wall surrounding a blown-up map of the state. Each mask is labeled with its related school and school colors. A string ties each mask to a pin showing the community from which it hails.

Denise Schuck, student council adviser and junior class sponsor, came up with the idea toward the end of September.

“I just thought it would be fun,” she said. “We aren’t the only school in the state that is wearing masks.” 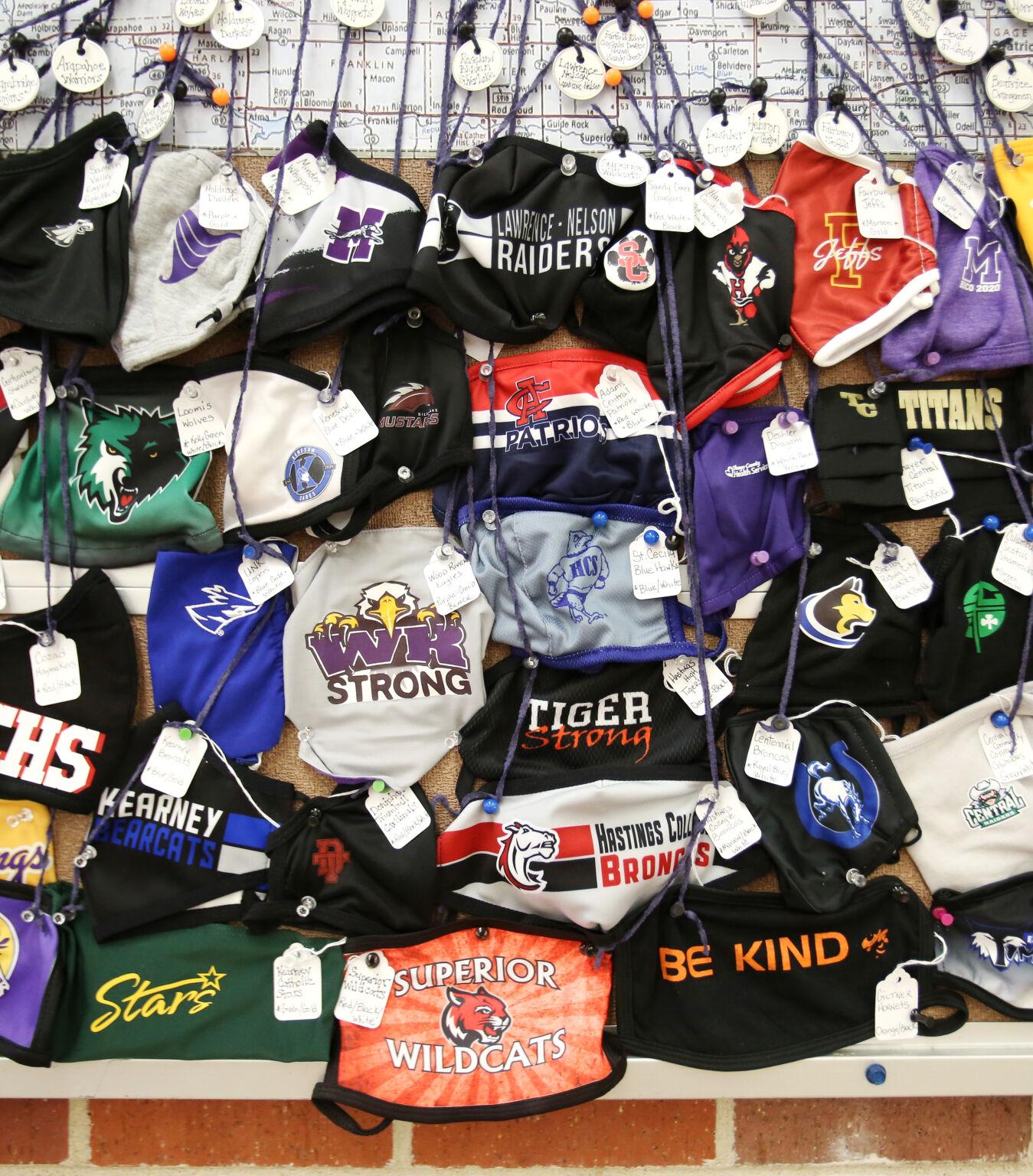 Face coverings collected by the student council are part of a Masks Across Nebraska display pictured Monday at Adams Central High School.

Schuck understands the importance of wearing masks and has donated her time to help. Since the start of the novel coronavirus disease, COVID-19, pandemic, Schuck has helped provide face coverings to friends and former students, sewing 1,342 masks herself.

But she also realized the awkwardness students may face while wearing face coverings and thought this project could help lessen that for students.

Schuck worked with the student council for ideas on contacts students or staff might have with high schools and colleges across the state.

Reuben Barry, student council president, said the group encouraged students to help find masks from other areas as a way to earn points toward a class. 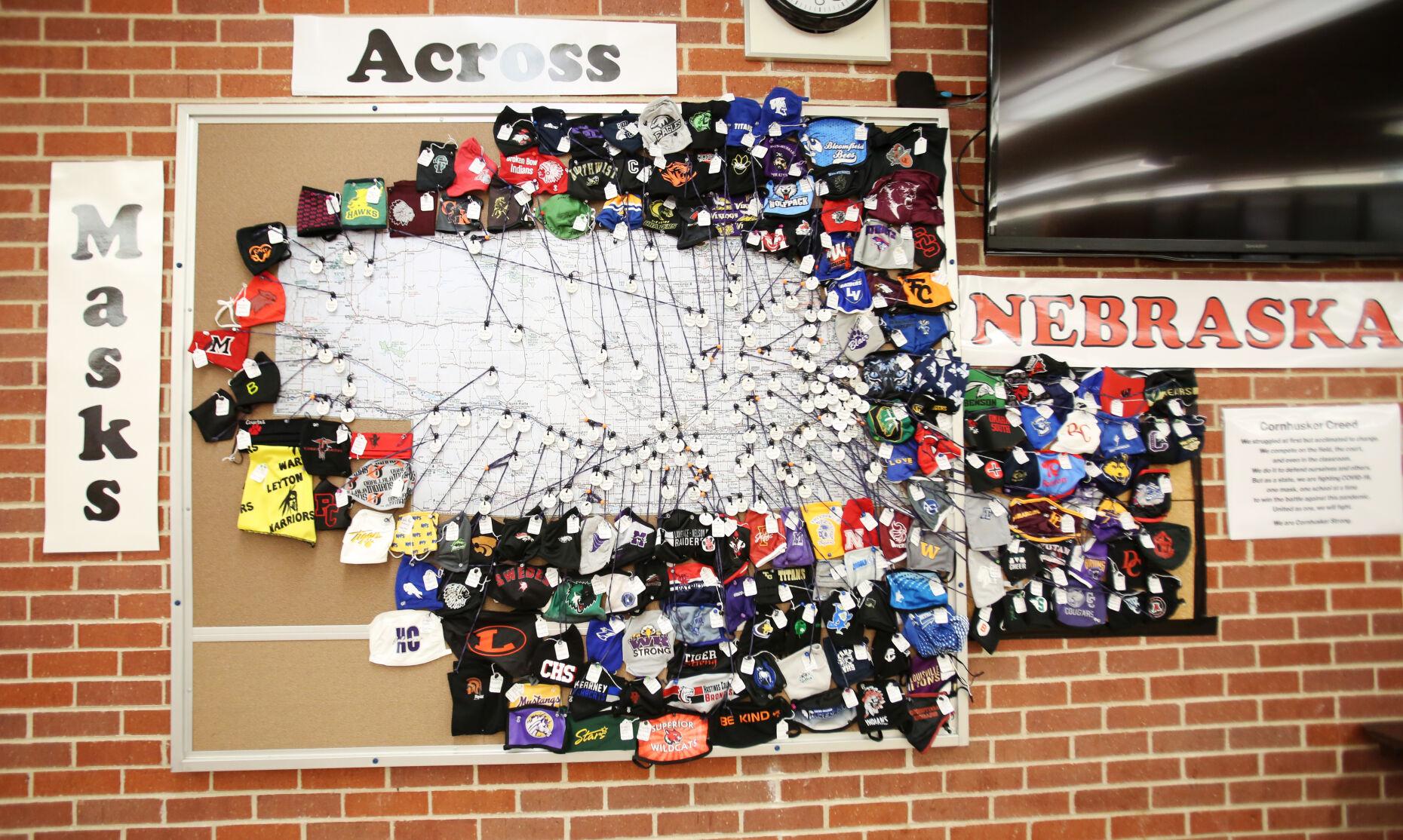 Student council members also developed their own Cornhusker Creed to encourage one another and demonstrate camaraderie in the pandemic.

“It’s overwhelming to look at it and see how many others there are,” Barry said. “We were never alone in what’s happening here.” 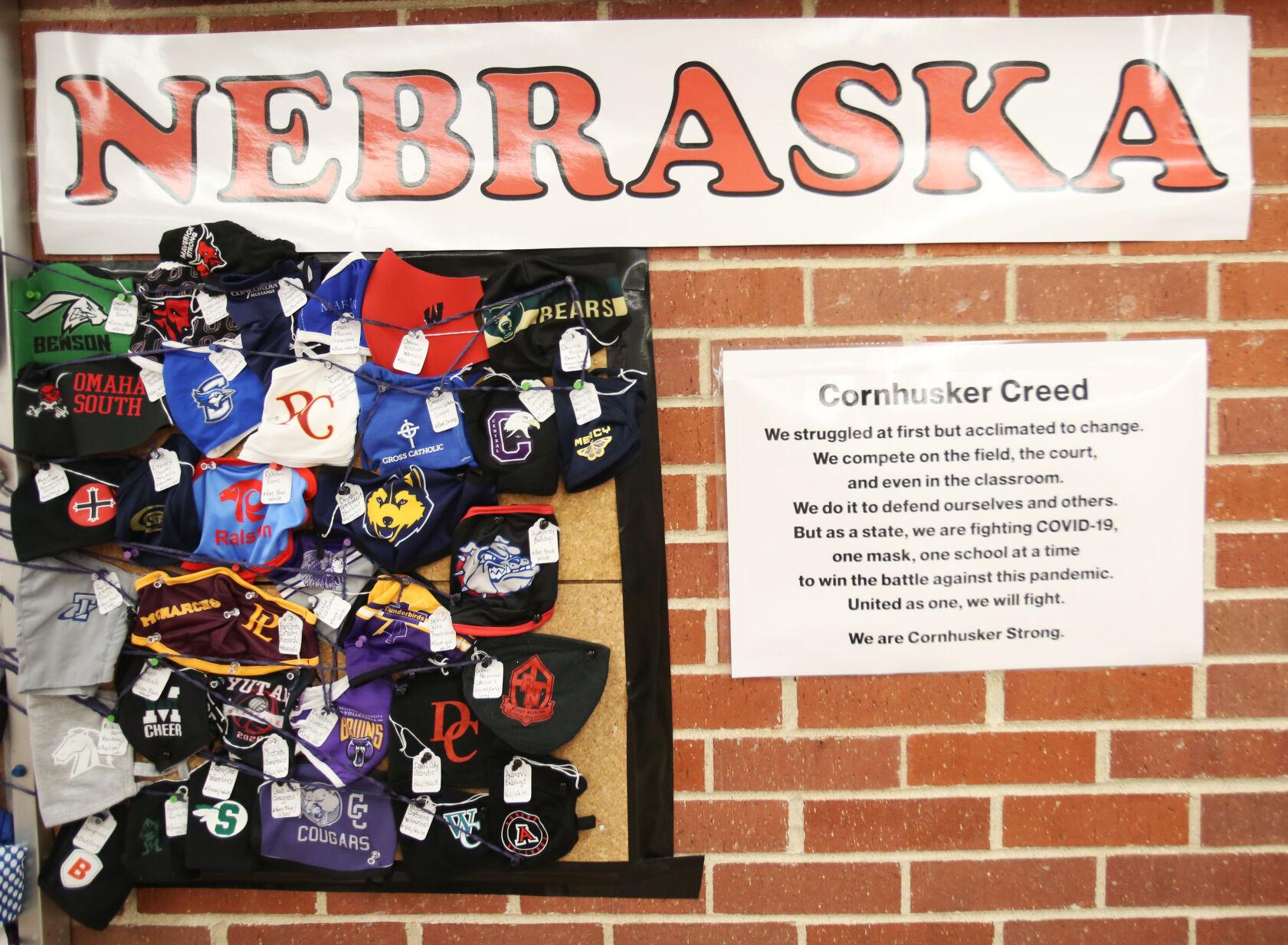 Masks from Omaha metro high schools and colleges are displayed Monday at Adams Central. Student council members also wrote the Cornhusker Creed expressing that no school is alone in stopping the spread of COVID-19.

For those schools in which they didn’t have contacts, Schuck used the Nebraska School Activities Association directory to find them. It took three days to track down email addresses to send messages to all the schools in the state she could find.

As of Monday, she had received 151 masks from high schools and colleges around the state. She’s become accustomed to receiving face coverings for her project in the mail, with the highlight being 22 masks coming in one day.

Some masks featured messages, such as Giltner’s “Be Kind.” Others showcased school mascots or artwork, like one from Hemingford that was specifically painted and crafted to “put the Hemingford Bobcats on the map.”

Alex Birky, vice president of the student council, said she was impressed by the variety of masks that other schools sent in. 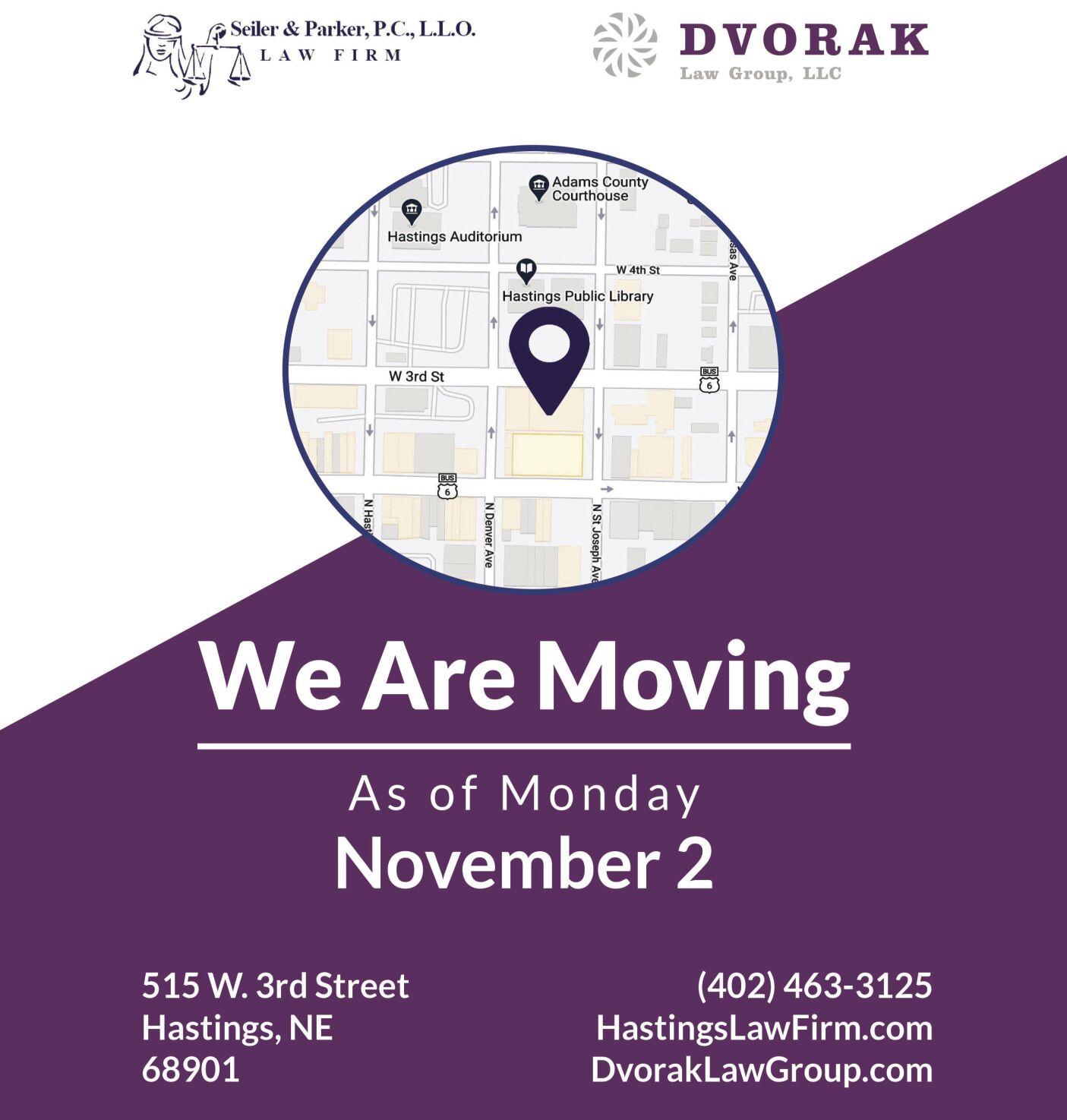 Adams County reached the unwelcome milestone of recording its 1,000th positive case of the novel coronavirus disease, COVID-19, in a resident over the weekend.

Meanwhile, the four-county South Heartland Health District, of which Adams County is a part, exceeded the 1,500 mark for positive cases recorded since the first was announced on March 18.

The 85 new cases recorded Friday through Monday included 51 in Adams County, 20 in Clay County, eight in Nuckolls County and six in Webster County.

COVID-19, which is caused by infection with the novel coronavirus, can cause anything from no symptoms at all to serious illness, in some cases resulting in death. To date, 19 South Heartland district residents have died of the disease.

Individuals at heightened risk of severe illness include older adults and those with certain medical conditions. The U.S. Centers for Disease Control and Prevention on Monday added to the list of conditions that might be associated with that heightened risk.

Severe illness from COVID-19 is defined as including hospitalization, admission to the intensive care unit, intubation or mechanical ventilation, or death.

The CDC recommends limiting close-contact interactions with other people as much as possible, and when going out or interacting with others outside your immediate household:

The months ahead could bring peril to many in the community, especially as Thanksgiving, Christmas and other holidays approach.

“Begin planning ahead for the fall and winter holidays and look for ways to reduce your risk,” Bever said. “Avoid in-person gatherings with people who do not live in your household. You should avoid larger gatherings and consider alternate activities that pose lower risk such as shopping online rather than in person, or attending a small outdoor event with safety precautions in place.”

In the neighboring Two Rivers Public Health Department to the west of the Hastings area, new COVID-19 cases recorded Thursday through Sunday in Tribland counties included nine in Kearney County, seven in Harlan County and four in Franklin County, Two Rivers reported on its website.

For more information from that district, visit www.trphd.org. 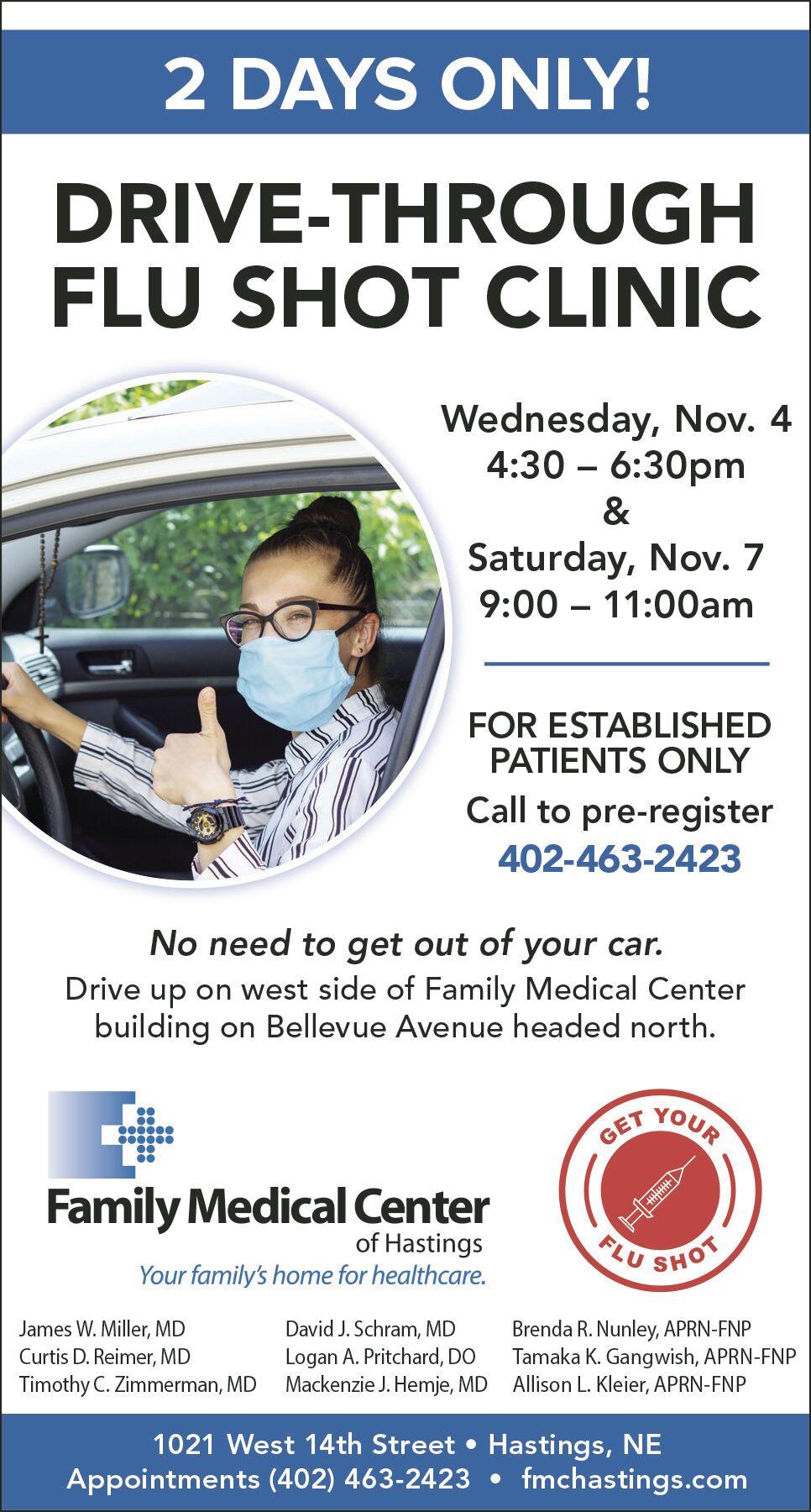 Members of the Adams County Planning and Zoning Commission voted 8-0 during their regular meeting Monday to recommend approval of a conditional use permit for a child care center in the former church building at 208 Doane Ave., with the condition that a plan is in place for parking, loading and unloading.

The recommendation is to the Kenesaw Village Board, which meets Nov. 10.

The conditional use request comes less than a month after the church closed for good. 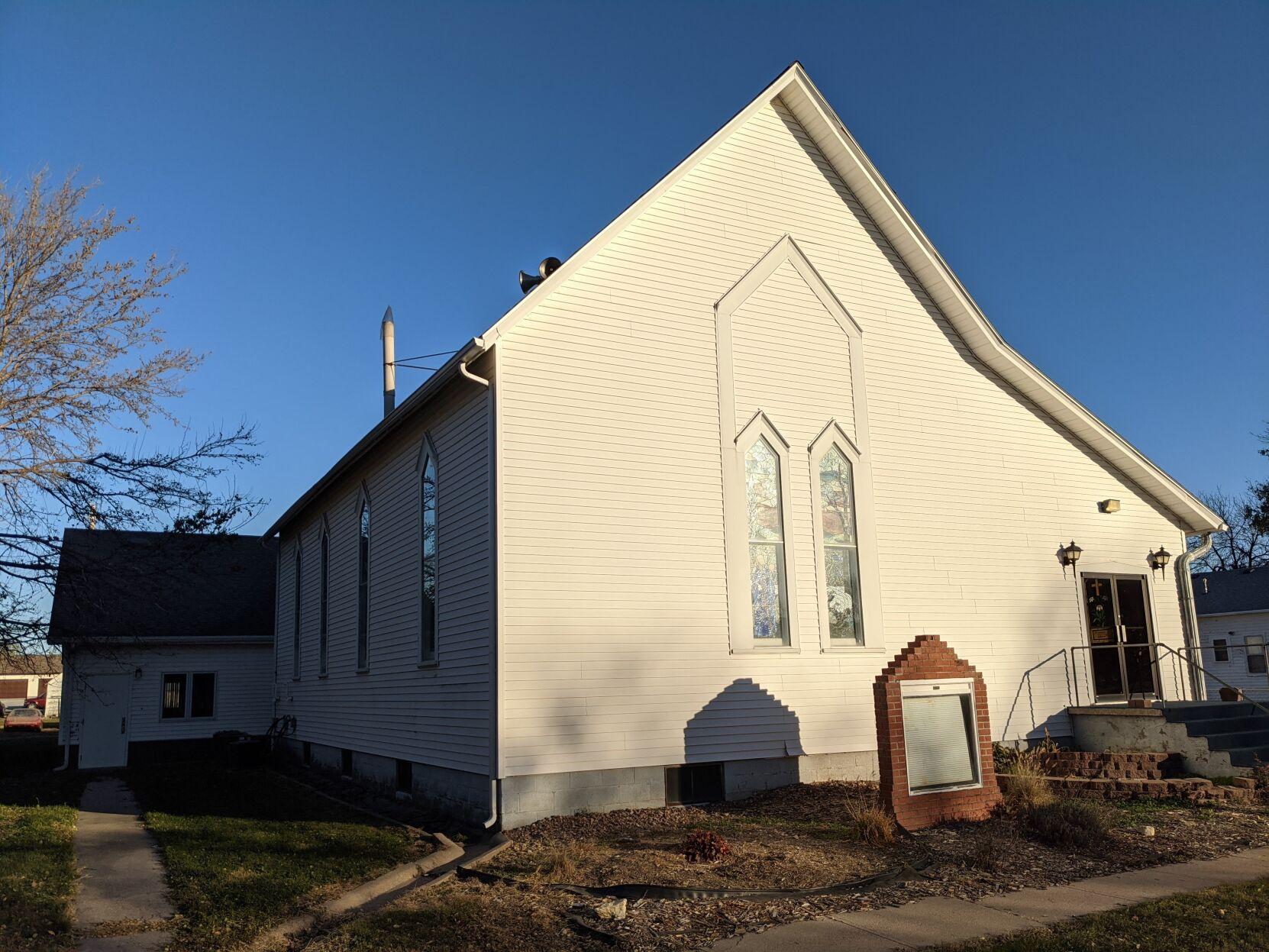 “Not a real big bunch, but consistently there were six or seven that were the ones that were there all the time,” she said in an interview Monday afternoon, before the meeting.

The congregation made an initial vote to close in late September. The church then had a conference with the district superintendent to do the final paper ballot on Oct. 18.

“When we came to them saying we wanted to close our church we offered them a win-win,” church lay leader Robert Aderholt told the commissioners.

By providing the space for a child care center, serving ages 6 weeks to 12 years, the church is serving a need.

“We really feel like the legacy of the church will live on,” Uldrich said.

She plans to make a sign for the child care center that says “the ministry continues.”

“That’s going to be one of our mottos,” she said. “We want people to understand that the building is not going to be boarded up and filled with junk. It’s going to be alive and very vibrant with this program going into it. I think it’ll be a very good thing to have, and it’s very, very much needed in Kenesaw.”

The nonprofit Kenesaw United Child Care Coalition will hire a director to run the child care center. The organization has an eight-member board that includes Uldrich as well as Angela Keiser and Megan Krous.

Krous is part of the Adams County Communities for Kids initiative, which launched a countywide child care survey earlier this year.

She said 48 of the 63 Kenesaw respondents expressed a need for child care of some sort.

She said there is an existing child care in Kenesaw that does good work, but that facility is only licensed for so many children.

“There’s other children who need a place to go to, too,” Krous said.

Uldrich said when it became apparent the church may close, she told Keiser, “You’re the one; you’re at the top of the list” to give the building new life.

The building has a “superb” location, Uldrich said, being just a few blocks from the school, as well as close to downtown.

The church was formed in 1871 with classes in congregants’ homes and officially started a year later.

A replacement building was quickly built. It was remodeled in 1951.

The church’s fellowship hall was dedicated in 1992.

The sanctuary part of the building is older but still “solid,” Uldrich said.

“It’s really an awesome place to be able to be renovated a little bit to accommodate this,” she said. “I can’t think of anything better than to see the legacy of this church live on through young people from 6 weeks to 12 years.”

Uldrich said some of the Kenesaw United Methodist Church congregants have indicated they will attend the Juniata church. Others haven’t responded.

Besides Holstein, other nearby options are United Methodist churches in Wood River, Minden and Hastings.

Keiser said the plan is to put in a drop-off drive at the front of the church.

The nearby Kenesaw Presbyterian Church is allowing child care staff to park there.

Krous said the hope is to be licensed for 60 children, with the understanding that many of the children at the center would go there just after school. Licensing for that many children also would give the center an opportunity to grow.

“To me, it looks like you are fulfilling a need for the village. I commend you on that,” Commissioner Ron Sidlo said in making a motion to approve the conditional use permit application.

For more information go to www.kenesawchildcare.org.

Also during Monday’s meeting, the commissioners unanimously approved retaining the same officers as part of the annual reorganization: Dean Rolls as chair, Henry Wilson as vice chair, Zoning Administrator Judy Mignery as secretary, Bob Hansen as Board of Adjustment representative, and the Hastings Tribune as the legal newspaper. 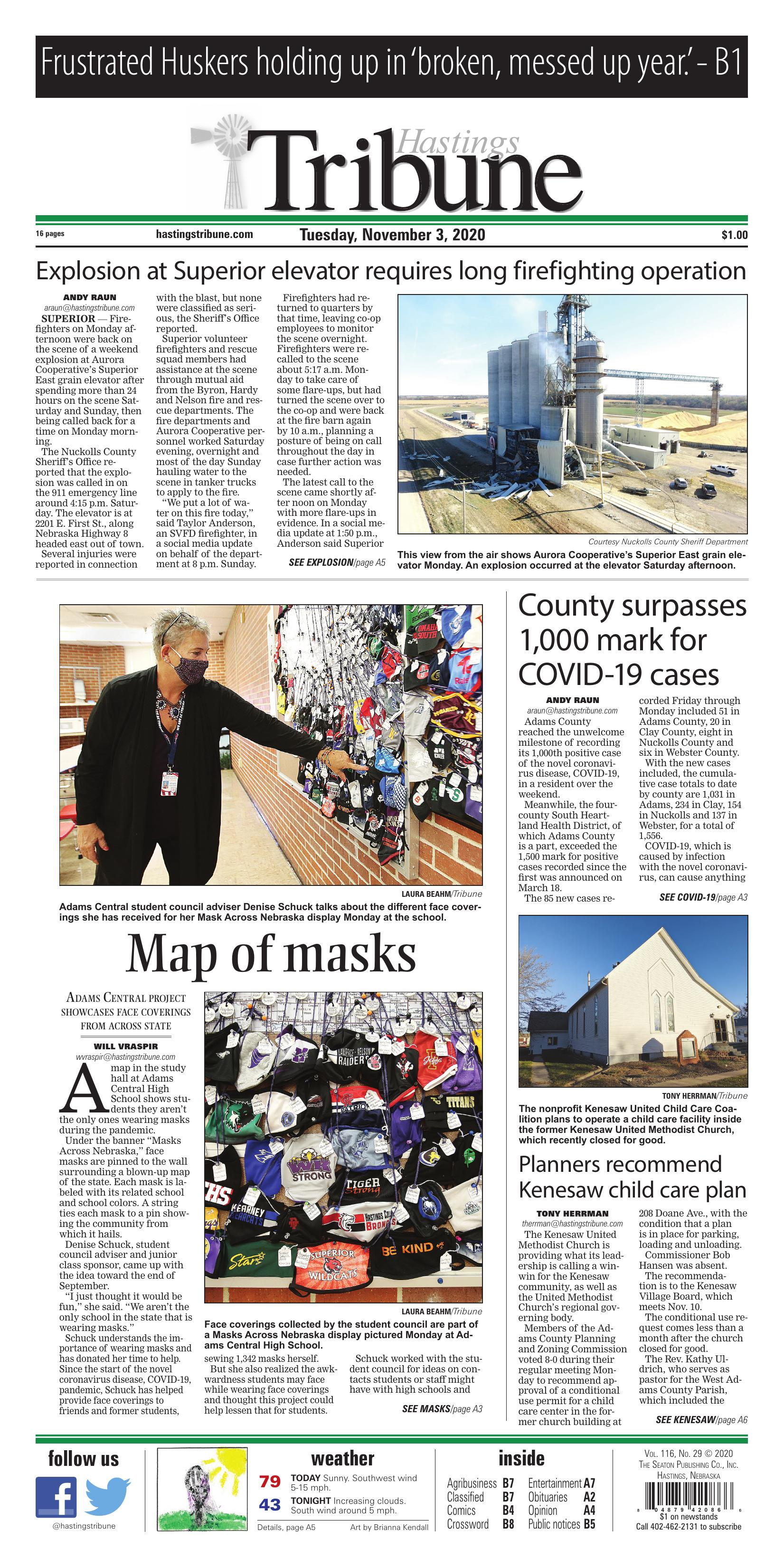