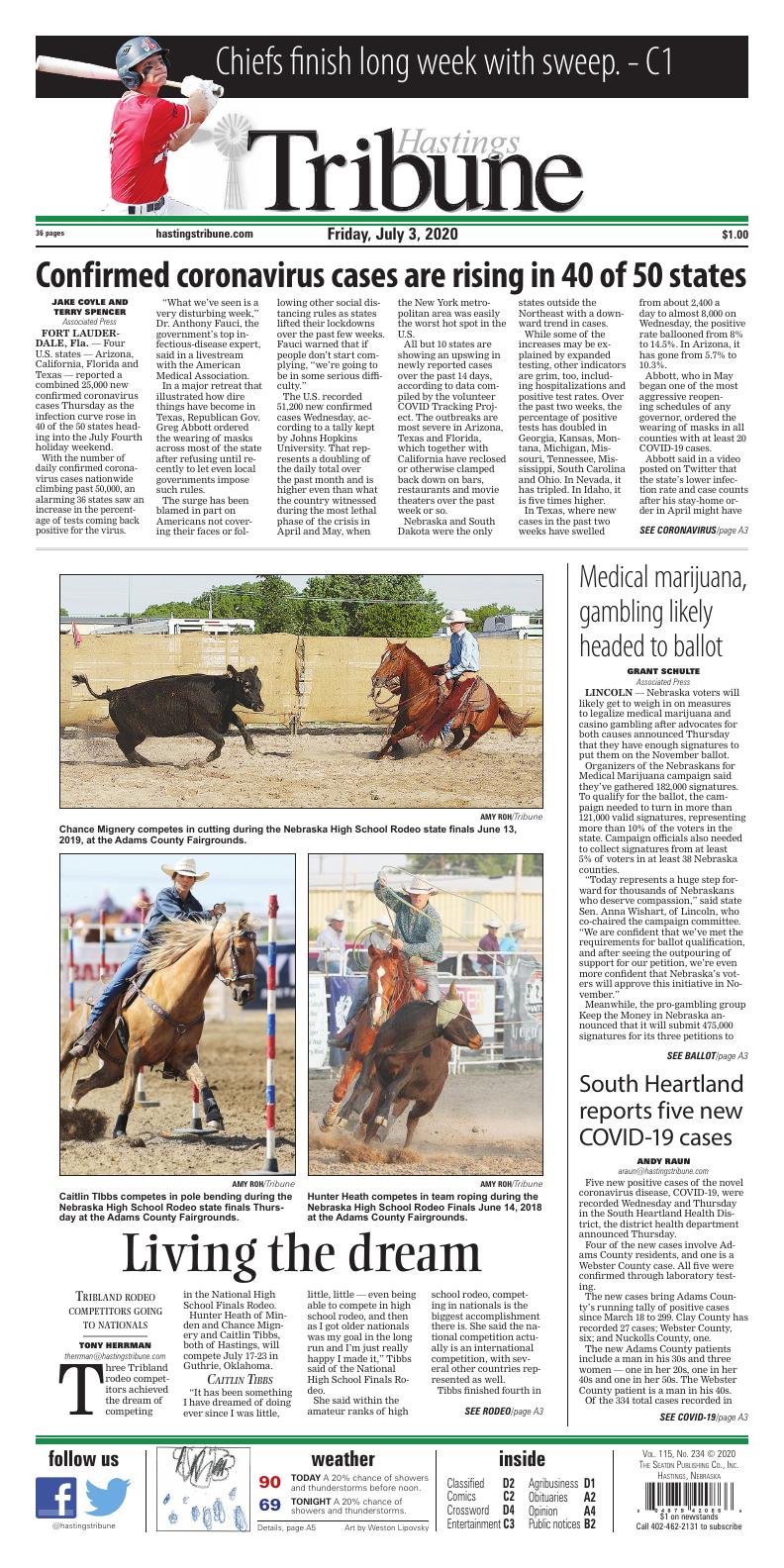 Hunter Heath of Minden and Chance Mignery and Caitlin Tibbs, both of Hastings, will compete July 17-23 in Guthrie, Oklahoma.

“It has been something I have dreamed of doing ever since I was little, little, little — even being able to compete in high school rodeo, and then as I got older nationals was my goal in the long run and I’m just really happy I made it,” Tibbs said of the National High School Finals Rodeo.

She said within the amateur ranks of high school rodeo, competing in nationals is the biggest accomplishment there is. She said the national competition actually is an international competition, with several other countries represented as well.

She was in second place at one point during the fall season and looking forward to continue that success during the spring season.

“Right when we were about to start up, the whole COVID pandemic came up,” Tibbs said, referring to the novel coronavirus disease. “All of our rodeos got canceled except for two.”

Those two rodeos were in early June.

The year-end placing is based on total points, allowing the top four contestants to compete in nationals.

“A lot of people are banking on those points,” she said.

She dropped a few places in the truncated spring season.

Tibbs, who has been competing in rodeo for two years, also took part in barrel racing at the state rodeo. She considers pole bending to be “one of the hardest competitions there is in rodeo.”

“You have 12 areas to make a mistake, and you have to do it at top speed,” she said. “You have to be a good rider. You can’t just get on a $40,000 horse and sit on it. You actually have to do the work and be one with your horse. That’s what I love about poles.”

“Honestly, I wasn’t planning on going to nationals,” he said. “I came into the state finals sitting 10th because I missed a couple fall rodeos last year. Without the spring rodeos I couldn’t catch up. I was out a couple points there.”

In Burwell, Mignery placed fifth on Thursday, fifth on Friday, and then won the short go run on Saturday.

“That bounced me up enough to go into third,” he said.

Cutting, in which the competitor separates three head of cattle from a larger herd, fits right in line with the ranching work he does, most of which is on horseback.

“Cutting, if you don’t sit in that saddle you’re going to be thrown off pretty quick,” he said. “Horsemanship plays a big role in that and where you sit on your horse. I think that has helped me a lot over the years, helped improve my riding skills to be able to get more advanced to cut through those other cattle working classes.”

Last year was Mignery’s first year to compete at state.

While he appreciated the rodeo at Burwell, he missed having a hometown event. Because of public health concerns, the Adams County Agricultural Society was unable to play host to the Nebraska State High School Rodeo Finals on the Adams County Fairgrounds in Hastings this year as planned.

“I wasn’t able to just wake up and drive into town and drive right back home and take a nap,” he said. “It wasn’t close like that, but Burwell still put on a great rodeo. It’s better than not having a rodeo at all.” 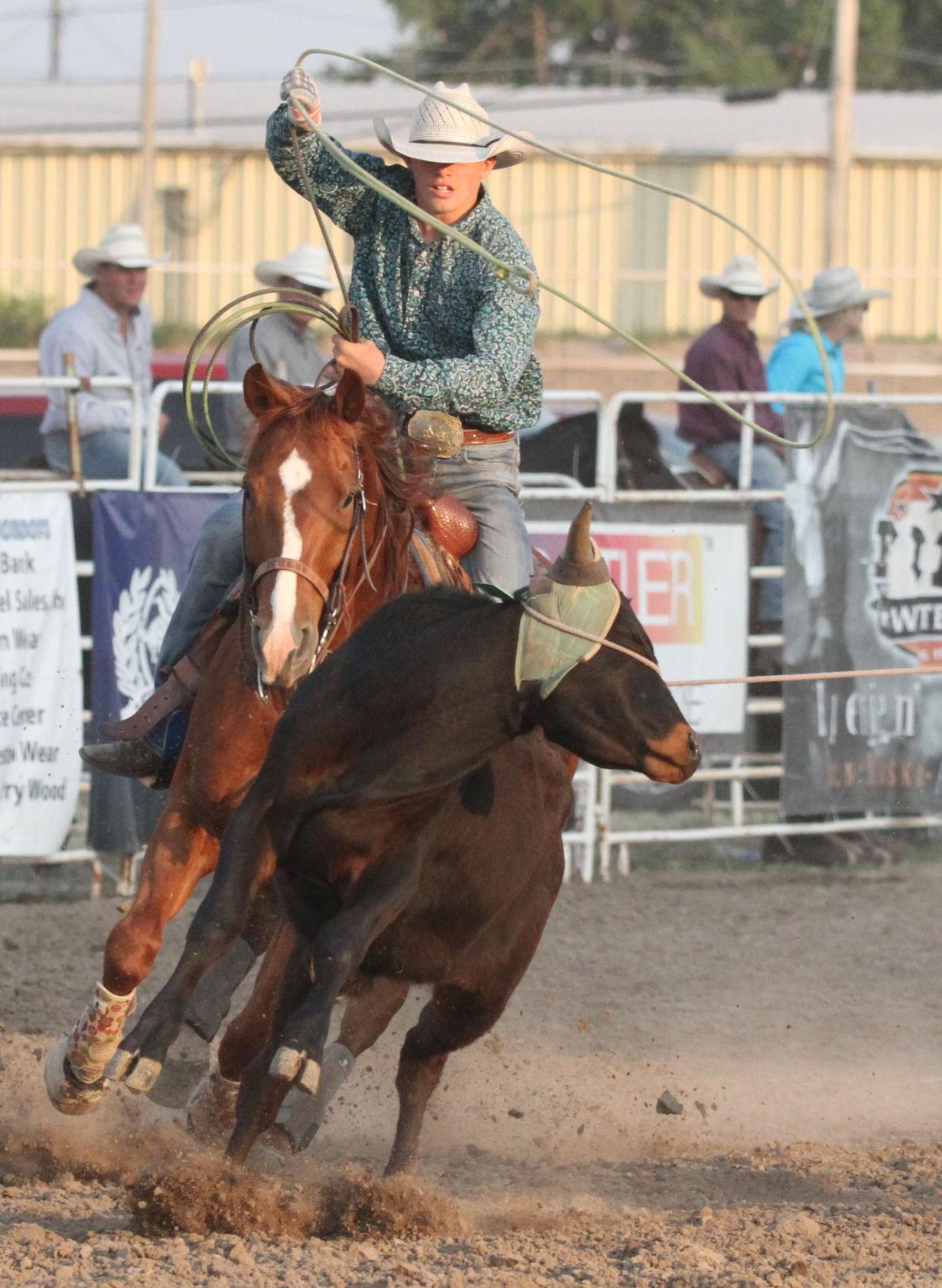 Heath and his team roping partner, Cinch Heikel of Hazard, had an equally exciting finish in Burwell.

“Cinch and I came into state number 11,” he said. “Last year, we came in 16th or something like that and we didn’t make it, but this year we kind of came in and said we’re going to go out and have fun and go out to win it.”

“It was super exciting,” he said. “Cinch and I couldn’t really believe it, so we kind of freaked out once we realized we made it.”

Heath and Heikel met because Heath’s parents, Kyle and Jessica, knew Cinch’s parents, Lance and Marti. Several years ago, the boys teamed up to start practicing together for team roping competitions.

They’ve been competing since their freshman year of high school.

“It’s been fun,” Heath said. “We both get along super well and we have a lot in common. We like to hang out and we like to have fun together. We almost see each other more as brothers than just friends.”

Heath, who will turn 18 during the National High School Finals Rodeo, will be a senior this fall at Minden High School.

In addition to rodeo, he also competes in football, wrestling and track.

“I don’t really have a lot of free time to mess around,” he said.

Other Tribland rodeo contestants who placed on the state all-around leader board include the following: 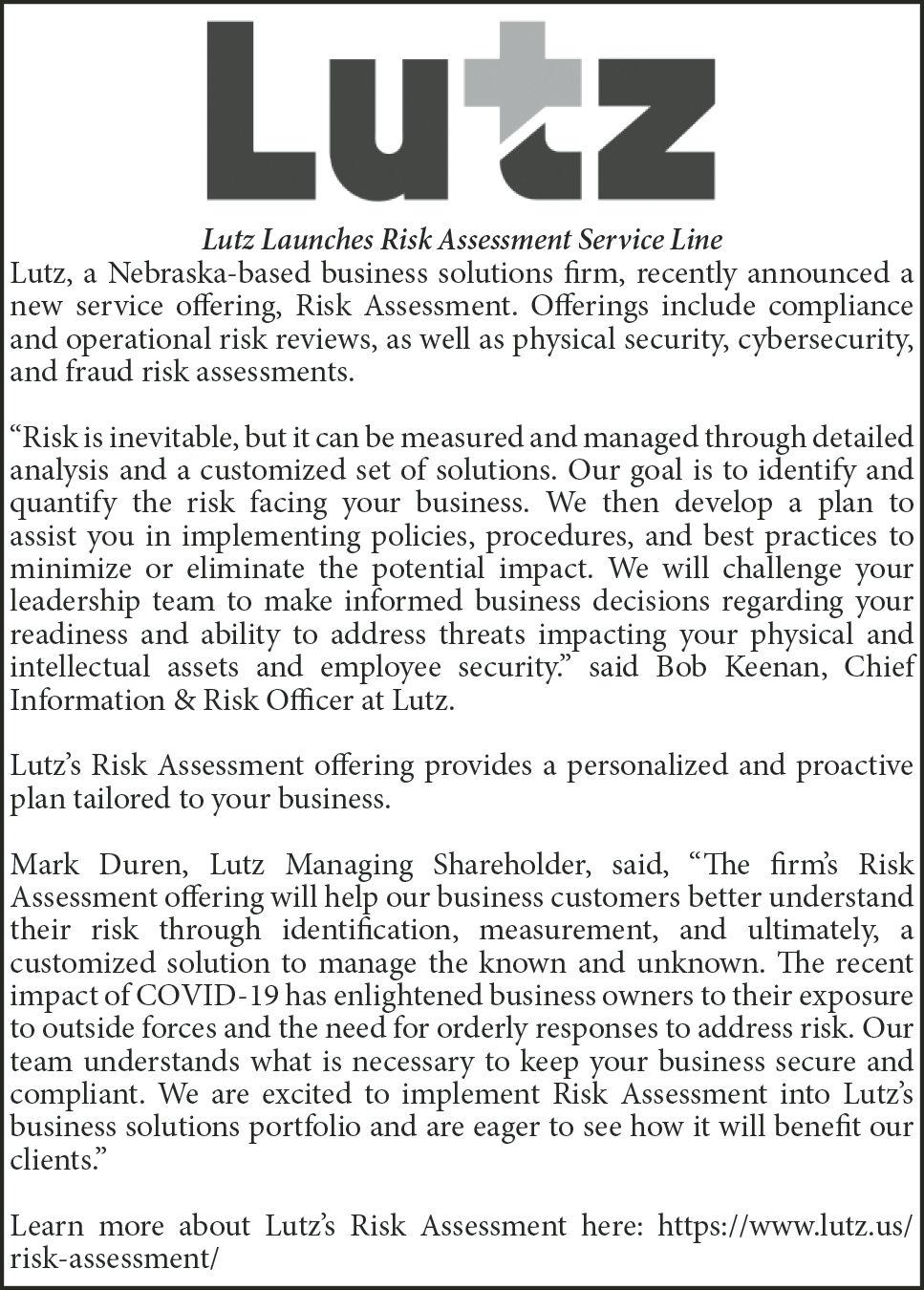 Four of the new cases involve Adams County residents, and one is a Webster County case. All five were confirmed through laboratory testing.

Of the 334 total cases recorded in the district, 304 of the patients have recovered. The district’s death toll stands at 11.

“We continue to conduct case and contact investigations for individuals who test positive and live in Adams, Clay, Nuckolls or Webster counties,” said South Heartland Executive Director Michele Bever. “Cases are always directed to isolate themselves and may be released from isolation only after they have completed 10 days since the beginning of their symptoms AND 3 days fever free AND symptoms improved. Close contacts are directed to quarantine and self-monitor for symptoms for 14 days from the date of their exposure” she said.

Bever also reported updates to SHDHD’s dashboard, found on its website at southheartlandhealth.org.

“We added some new information to our COVID-19 data dashboard, including frequency of various symptoms associated with COVID-19 cases in our district. The most common symptoms are cough, fatigue and fever,” she said.

Another chart the department added to the dashboard is COVID-19 cases by occupation, which shows that the highest proportion of cases in the district is associated with food production occupations (15%) and manufacturing (11%). Social distancing often is more difficult in these settings.

“We also just launched SHDHD’s COVID-19 Risk Dial, which provides a summary of current COVID-19 conditions in the South Heartland District. Each level of risk — low (green), moderate (yellow), elevated (orange) and severe (red) — is linked with federal and national guidance published by top public health experts and is coupled with specific guidance for actions to take at home, at work and in the community,” she said. “We will update this risk dial weekly.

“Our district is in the ‘moderate’ risk level, based on hospital and health department capacity indicators, positivity rates, access to testing, and other indicators. We hope this risk dial, along with the other information on the dashboard, will help people know what’s going on in our four-county health district so they can make informed decisions and take actions to keep themselves and others safe.”

South Heartland District case counts and trends can be found on SHDHD’s dashboard of local COVID-19 case statistics. This dashboard, along with updates, guidance, news releases and other COVID-19 information and links, can be found on the SHDHD website:www.southheartlandhealth.org. The Nebraska Department of Health and Human Services provides daily updates to Nebraska’s coronavirus COVID-19 cases on its Data Dashboard at http://dhhs.ne.gov/Pages/Coronavirus.

Statewide, the running tally of cases stood at 19,452 as of Thursday evening, with 282 fatalities, the Nebraska Department of Health and Human Services reported. A total of 410 new laboratory-confirmed cases were recorded Tuesday through Thursday.

Forty-one percent of the state’s hospital beds were available for patients as of Thursday, along with 48% of all intensive care beds and 80% of ventilators, the state agency reported. 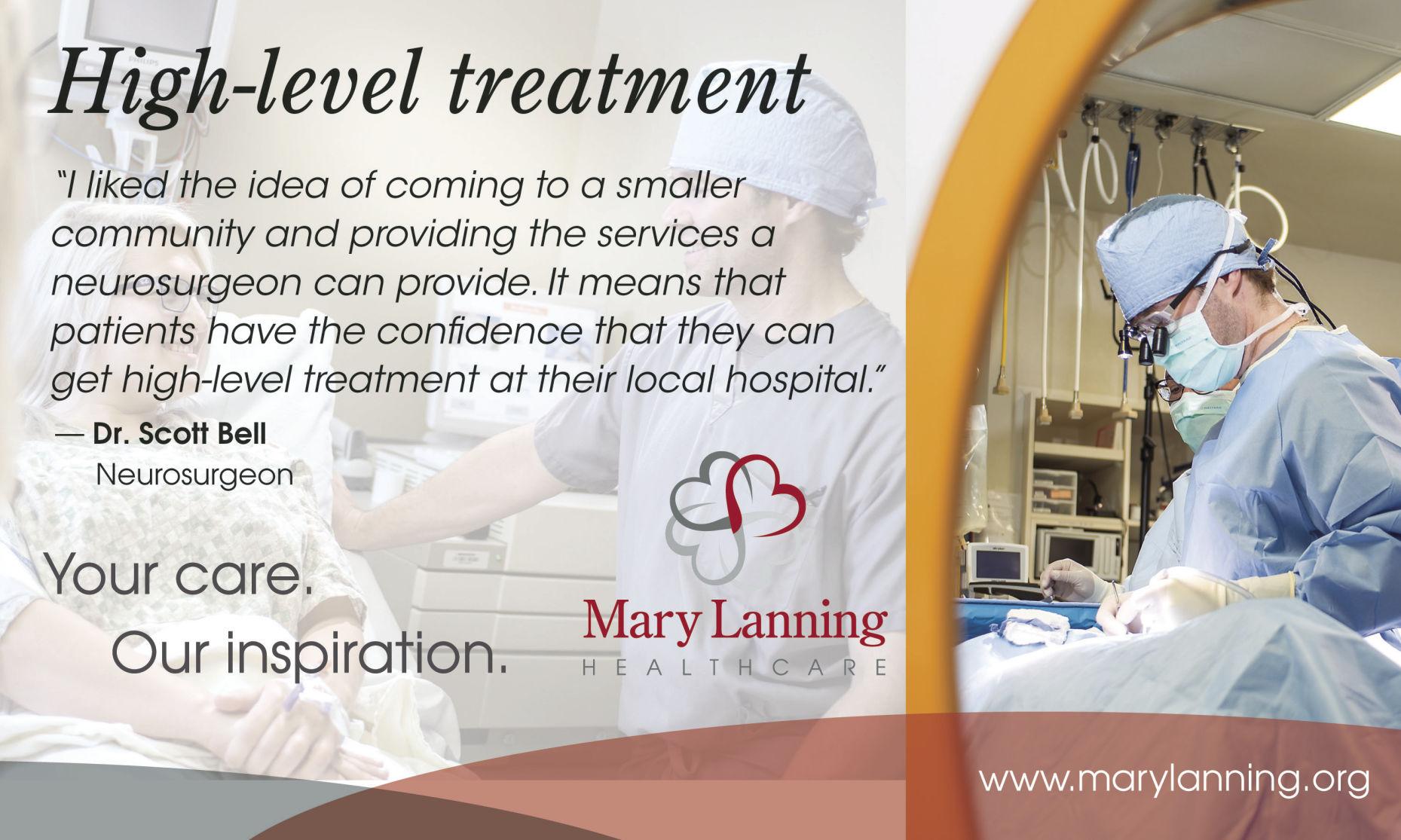 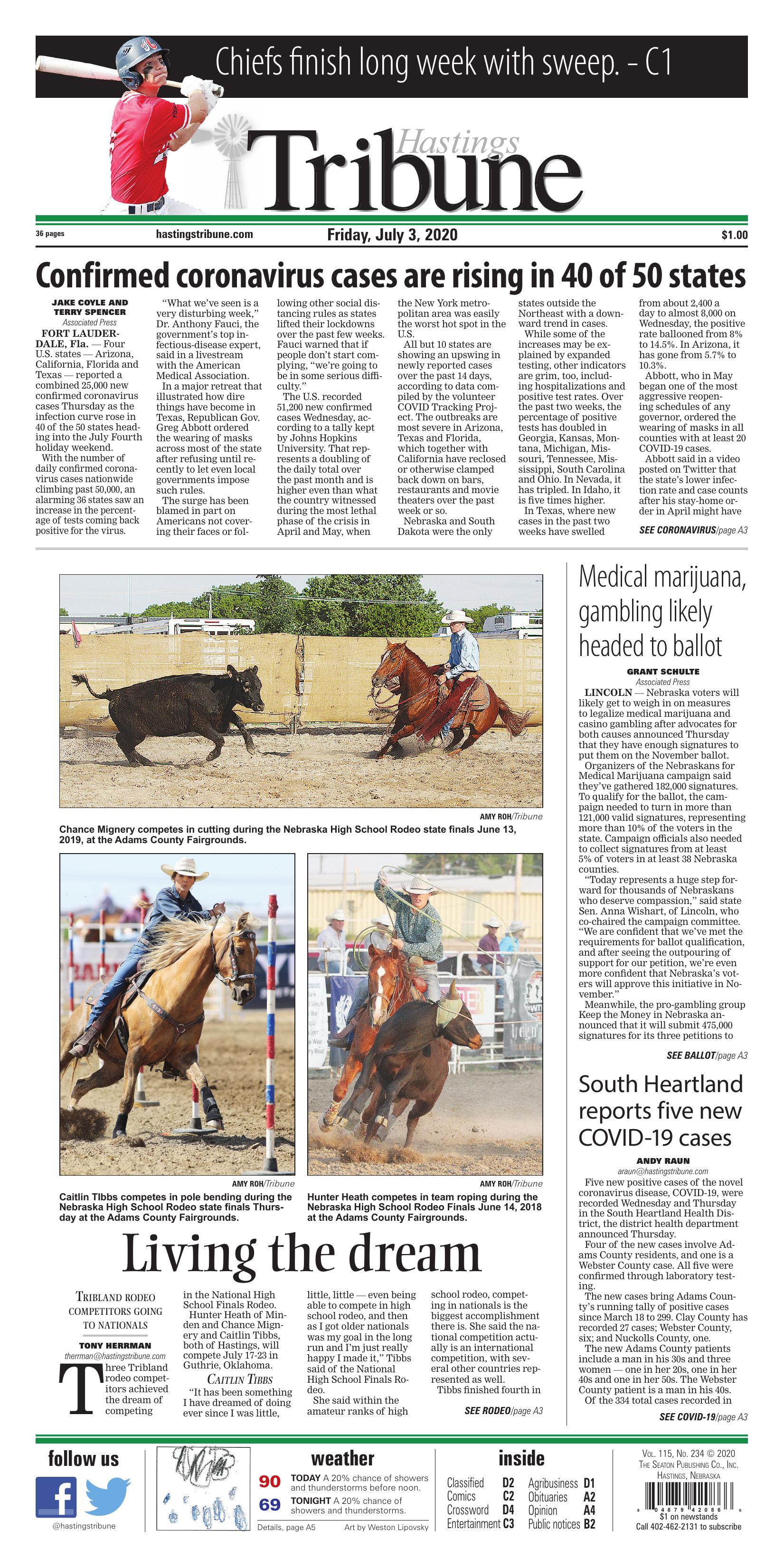