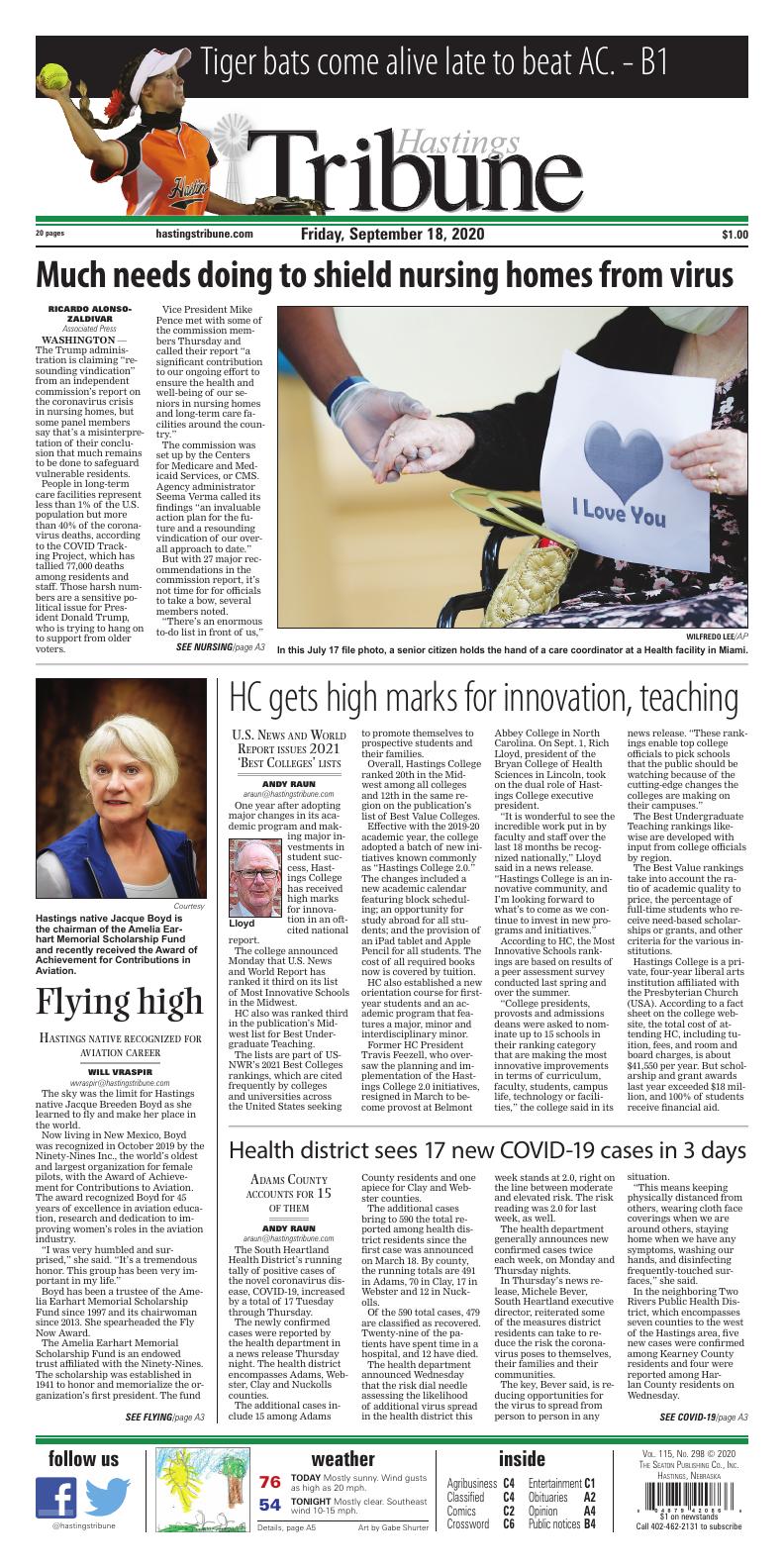 One year after adopting major changes in its academic program and making major investments in student success, Hastings College has received high marks for innovation in an oft-cited national report.

The college announced Monday that U.S. News and World Report has ranked it third on its list of Most Innovative Schools in the Midwest.

The lists are part of USNWR’s 2021 Best Colleges rankings, which are cited frequently by colleges and universities across the United States seeking to promote themselves to prospective students and their families.

Overall, Hastings College ranked 20th in the Midwest among all colleges and 12th in the same region on the publication’s list of Best Value Colleges.

Effective with the 2019-20 academic year, the college adopted a batch of new initiatives known commonly as “Hastings College 2.0.” The changes included a new academic calendar featuring block scheduling; an opportunity for study abroad for all students; and the provision of an iPad tablet and Apple Pencil for all students. The cost of all required books now is covered by tuition.

HC also established a new orientation course for first-year students and an academic program that features a major, minor and interdisciplinary minor.

Former HC President Travis Feezell, who oversaw the planning and implementation of the Hastings College 2.0 initiatives, resigned in March to become provost at Belmont Abbey College in North Carolina. On Sept. 1, Rich Lloyd, president of the Bryan College of Health Sciences in Lincoln, took on the dual role of Hastings College executive president.

“It is wonderful to see the incredible work put in by faculty and staff over the last 18 months be recognized nationally,” Lloyd said in a news release. “Hastings College is an innovative community, and I’m looking forward to what’s to come as we continue to invest in new programs and initiatives.”

According to HC, the Most Innovative Schools rankings are based on results of a peer assessment survey conducted last spring and over the summer.

“College presidents, provosts and admissions deans were asked to nominate up to 15 schools in their ranking category that are making the most innovative improvements in terms of curriculum, faculty, students, campus life, technology or facilities,” the college said in its news release. “These rankings enable top college officials to pick schools that the public should be watching because of the cutting-edge changes the colleges are making on their campuses.”

The Best Undergraduate Teaching rankings likewise are developed with input from college officials by region.

The Best Value rankings take into account the ratio of academic quality to price, the percentage of full-time students who receive need-based scholarships or grants, and other criteria for the various institutions.

Hastings College is a private, four-year liberal arts institution affiliated with the Presbyterian Church (USA). According to a fact sheet on the college website, the total cost of attending HC, including tuition, fees, and room and board charges, is about $41,550 per year. But scholarship and grant awards last year exceeded $18 million, and 100% of students receive financial aid.

The South Heartland Health District’s running tally of positive cases of the novel coronavirus disease, COVID-19, increased by a total of 17 Tuesday through Thursday.

The newly confirmed cases were reported by the health department in a news release Thursday night. The health district encompasses Adams, Webster, Clay and Nuckolls counties.

The additional cases include 15 among Adams County residents and one apiece for Clay and Webster counties.

The additional cases bring to 590 the total reported among health district residents since the first case was announced on March 18. By county, the running totals are 491 in Adams, 70 in Clay, 17 in Webster and 12 in Nuckolls.

Of the 590 total cases, 479 are classified as recovered. Twenty-nine of the patients have spent time in a hospital, and 12 have died.

The health department announced Wednesday that the risk dial needle assessing the likelihood of additional virus spread in the health district this week stands at 2.0, right on the line between moderate and elevated risk. The risk reading was 2.0 for last week, as well.

In Thursday’s news release, Michele Bever, South Heartland executive director, reiterated some of the measures district residents can take to reduce the risk the coronavirus poses to themselves, their families and their communities.

The key, Bever said, is reducing opportunities for the virus to spread from person to person in any situation.

“This means keeping physically distanced from others, wearing cloth face coverings when we are around others, staying home when we have any symptoms, washing our hands, and disinfecting frequently-touched surfaces,” she said.

In the neighboring Two Rivers Public Health District, which encompasses seven counties to the west of the Hastings area, five new cases were confirmed among Kearney County residents and four were reported among Harlan County residents on Wednesday.

Nebraska’s running statewide total of positive cases stood at 39,921 as of Thursday. The statewide death toll stood at 442.

Hastings native Jacque Boyd is the chairman of the Amelia Earhart Memorial Scholarship Fund and recently received the Award of Achievement for Contributions in Aviation.

The sky was the limit for Hastings native Jacque Breeden Boyd as she learned to fly and make her place in the world.

Now living in New Mexico, Boyd was recognized in October 2019 by the Ninety-Nines Inc., the world’s oldest and largest organization for female pilots, with the Award of Achievement for Contributions to Aviation. The award recognized Boyd for 45 years of excellence in aviation education, research and dedication to improving women’s roles in the aviation industry.

“I was very humbled and surprised,” she said. “It’s a tremendous honor. This group has been very important in my life.”

Boyd has been a trustee of the Amelia Earhart Memorial Scholarship Fund since 1997 and its chairwoman since 2013. She spearheaded the Fly Now Award.

The Amelia Earhart Memorial Scholarship Fund is an endowed trust affiliated with the Ninety-Nines. The scholarship was established in 1941 to honor and memorialize the organization’s first president. The fund has provided more than $11.5 million to women from the United States, Canada and more than 15 other countries in the form of 965 scholarships for initial ratings, academic awards and advanced flight training.

Boyd said the fund provides about $250,000 in scholarships every year. She knows firsthand the importance of these scholarships.

“Having won this award in 1979 is why I’m where I am,” she said. “I think that’s why this is so important to me. It helps with those expenses to be able to get where it is you want to be.”

Boyd grew up in Hastings, where her father, Jack, was a switchman for the Union Pacific Railroad. Her mother, Ruthe Breeden, was a teacher in the Hastings Public Schools for years.

She graduated from Hastings High School in 1969 and earned a bachelor’s degree in education from Hastings College in 1973. She moved to Grand Island and taught first grade.

That’s also where she learned to fly.

Boyd began learning to fly in 1975 in her spare time.

“I taught all day and flew when I could,” she said.

She got involved in flying just to show she could. Growing up, she and her three older brothers loved riding bicycles out to the airport and watching the airplanes.

As they grew up, her brothers learned to fly and one pursued a career in aviation.

Boyd credited the education system in Hastings for encouraging her to pursue aviation.

“When I went to Hastings College, I found out what I was really capable of doing,” she said. “That’s one of the reasons I learned to fly.”

Once Boyd obtained her license, she joined the Ninety-Nines. She said the Nebraska chapter was very active at the time, spurred by outreach programs through NASA. She spent summers writing educational materials for NASA and various state aerospace education publications.

Boyd found she enjoyed the topic of aviation and applied for the Amelia Earhart Memorial Scholarship to pursue her master’s degree in aerospace education. At the time, the only university offering the relevant classes was located in Murfreesboro, Tennessee.

So she moved to Tennessee, but didn’t know anyone there. She found herself living in the dorms at age 29 because it was the most convenient and inexpensive option.

Despite the circumstances, Boyd knew it was the right choice to merge her interests in aviation and education.

“I loved teaching, so it just made so much sense,” she said.

Boyd later moved out of formal education and developed her own business, Aero Infosearch. Her business specialized in writing policy and benefit procedures for female pilots with airlines, corporations and university aviation departments. She continues this work in a consulting capacity.

She also has continued writing for educational and aviation publications.

In addition to her writing, Boyd has spoken at more than 75 aviation conferences; STEM (science, technology, engineering and mathematics) conferences working with young women; and educational workshops.

She said there were challenges as a woman in aviation, but she understood adversity, having grown up with three older brothers who provided a relentless challenge and then motivation to doing what she wanted to do.

“You just did what you had to do to be able to get where you wanted to go,” she said. 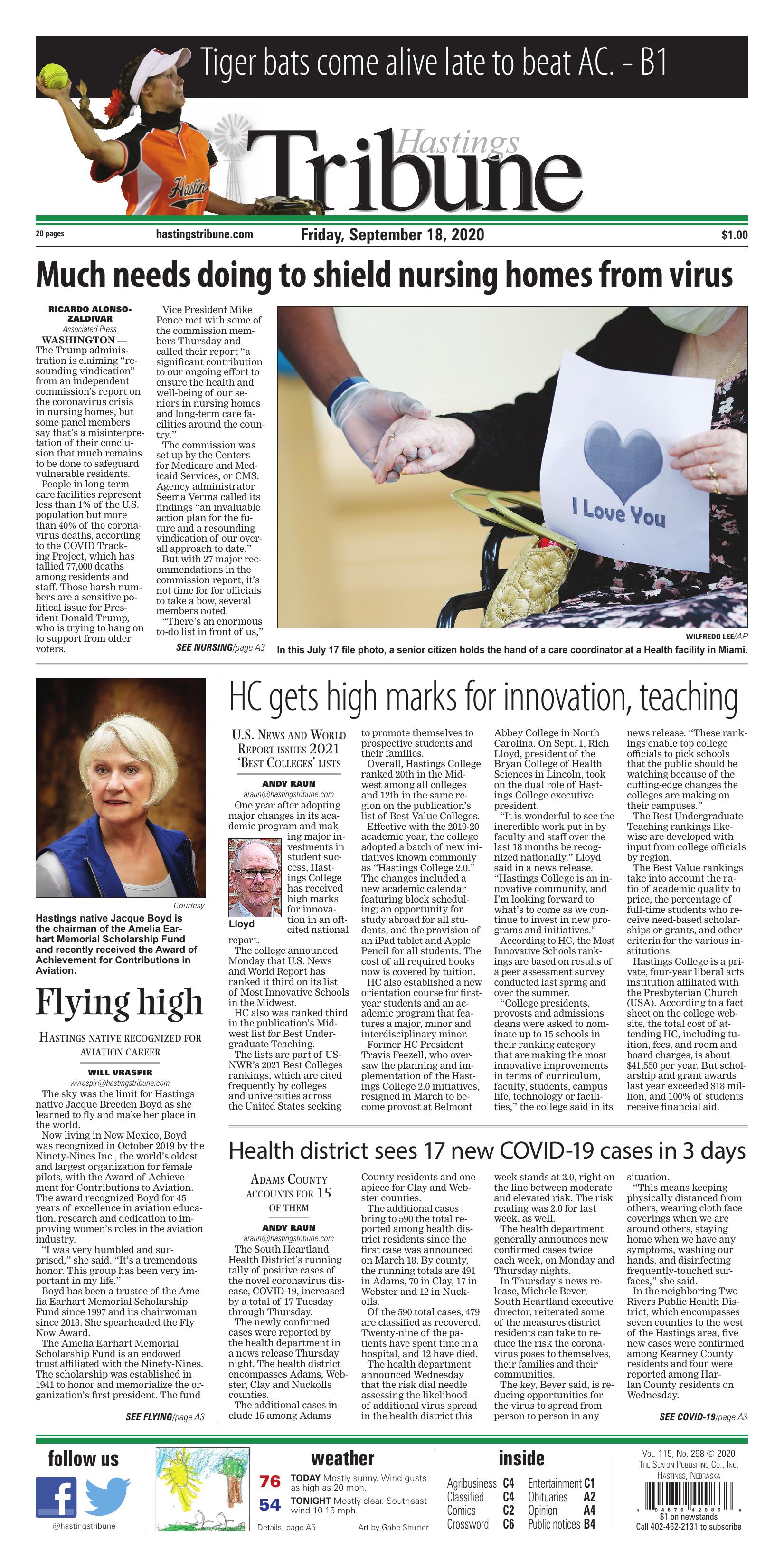