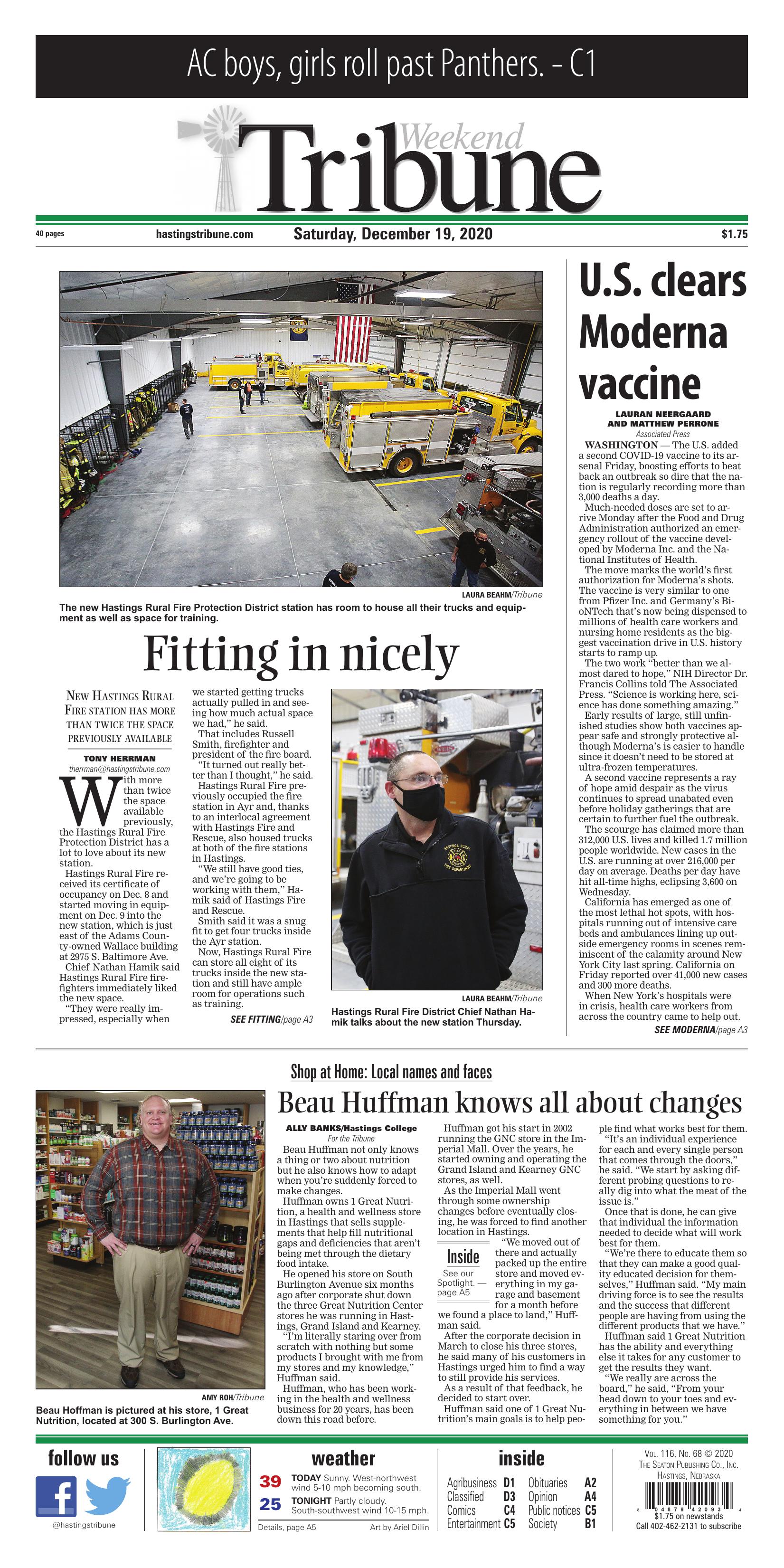 The new Hastings Rural Fire Protection District station has room to house all their trucks and equipment as well as space for training.

With more than twice the space available previously, the Hastings Rural Fire Protection District has a lot to love about its new station.

Hastings Rural Fire received its certificate of occupancy on Dec. 8 and started moving in equipment on Dec. 9 into the new station, which is just east of the Adams County-owned Wallace building at 2975 S. Baltimore Ave.

“They were really impressed, especially when we started getting trucks actually pulled in and seeing how much actual space we had,” he said. 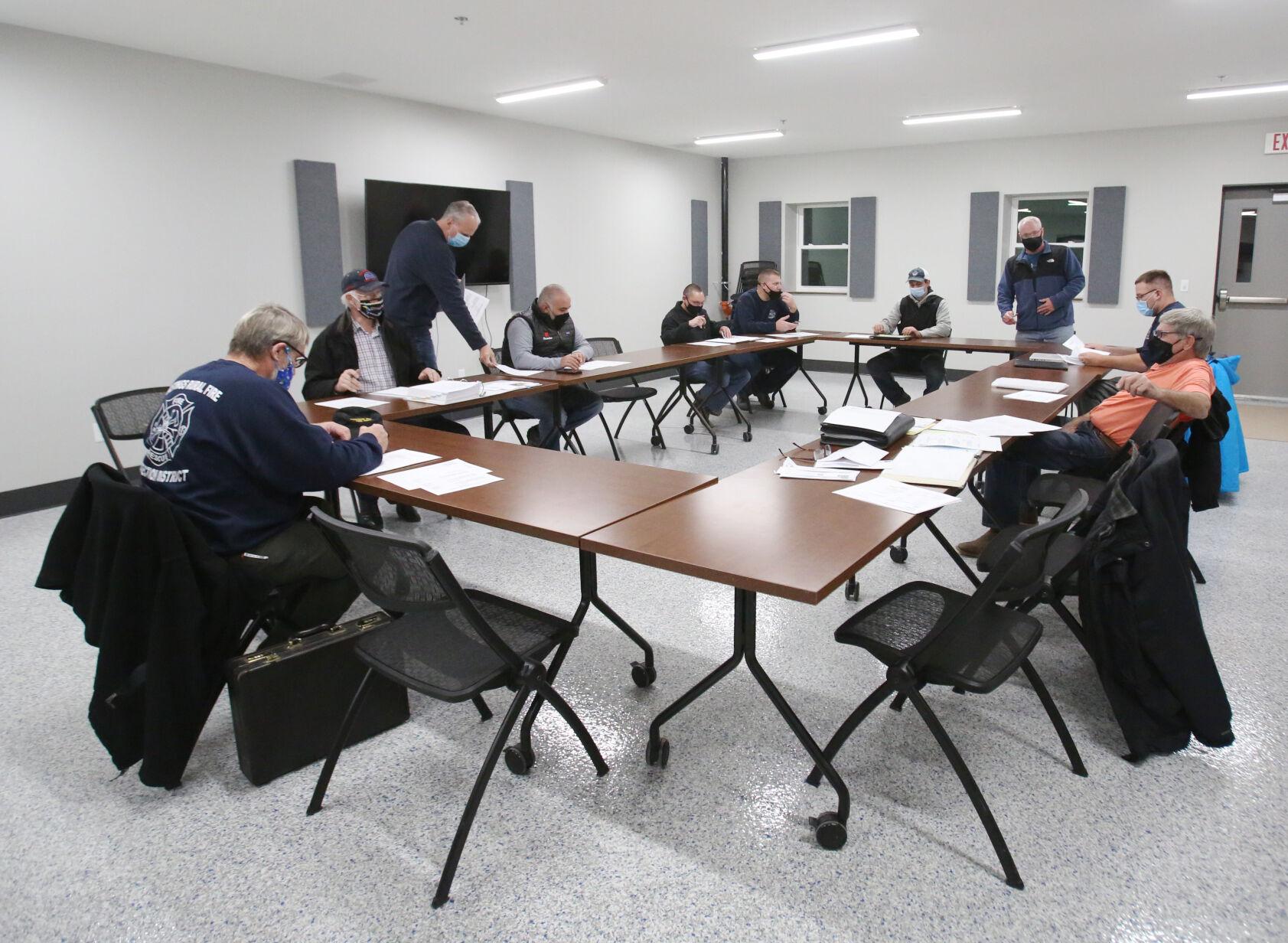 That includes Russell Smith, firefighter and president of the fire board.

“It turned out really better than I thought,” he said.

Hastings Rural Fire previously occupied the fire station in Ayr and, thanks to an interlocal agreement with Hastings Fire and Rescue, also housed trucks at both of the fire stations in Hastings.

“We still have good ties, and we’re going to be working with them,” Hamik said of Hastings Fire and Rescue. 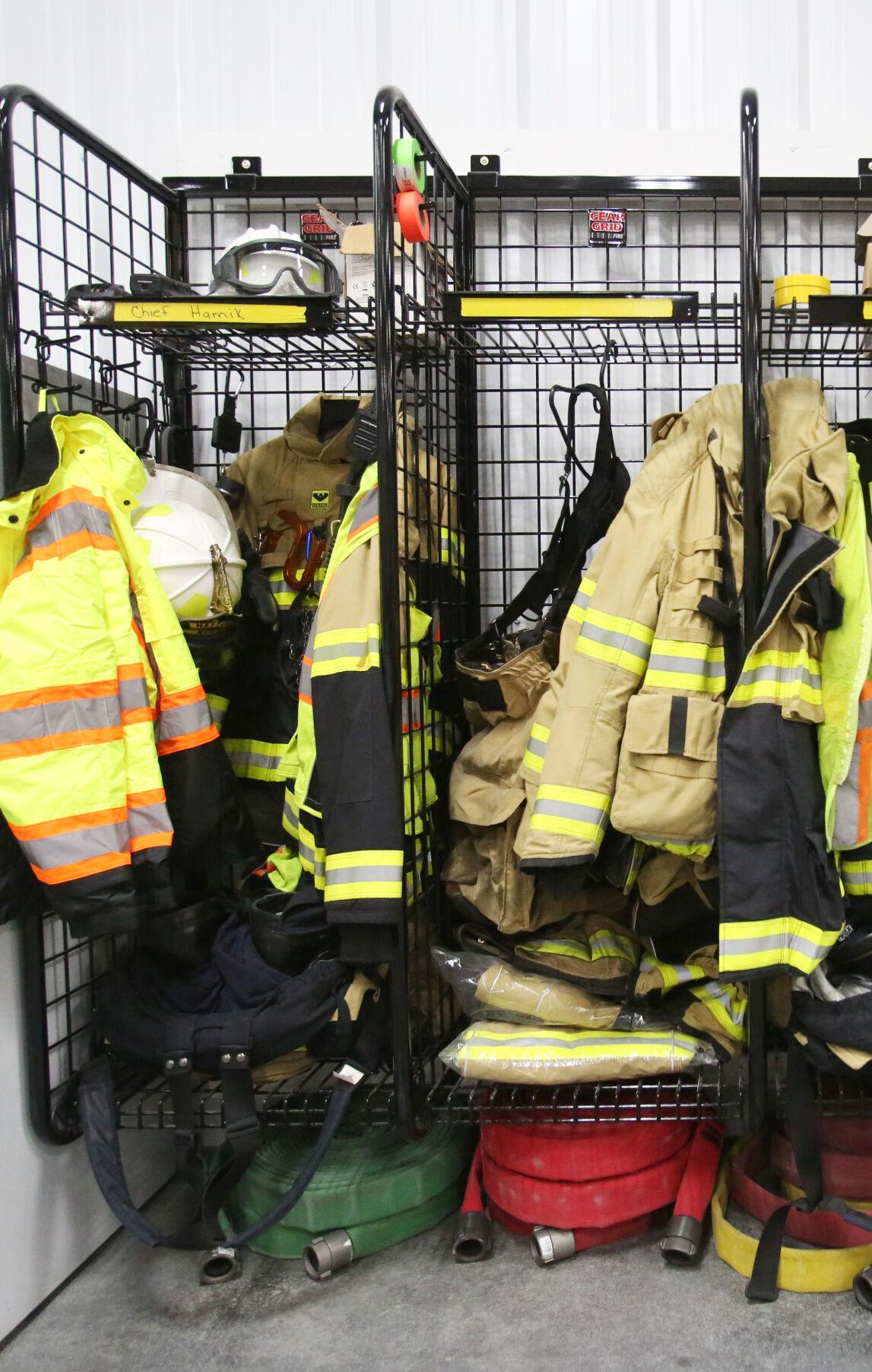 Gear and equipment is stored at the new Hastings Rural Fire District station.

Smith said it was a snug fit to get four trucks inside the Ayr station.

Now, Hastings Rural Fire can store all eight of its trucks inside the new station and still have ample room for operations such as training.

“It’s nice to be able to hold trainings inside and not have to move all the trucks outdoors,” Hamik said. “(Previously) you just hope for a good day, nice weather. Or, do it outside and suffer in the cold.” 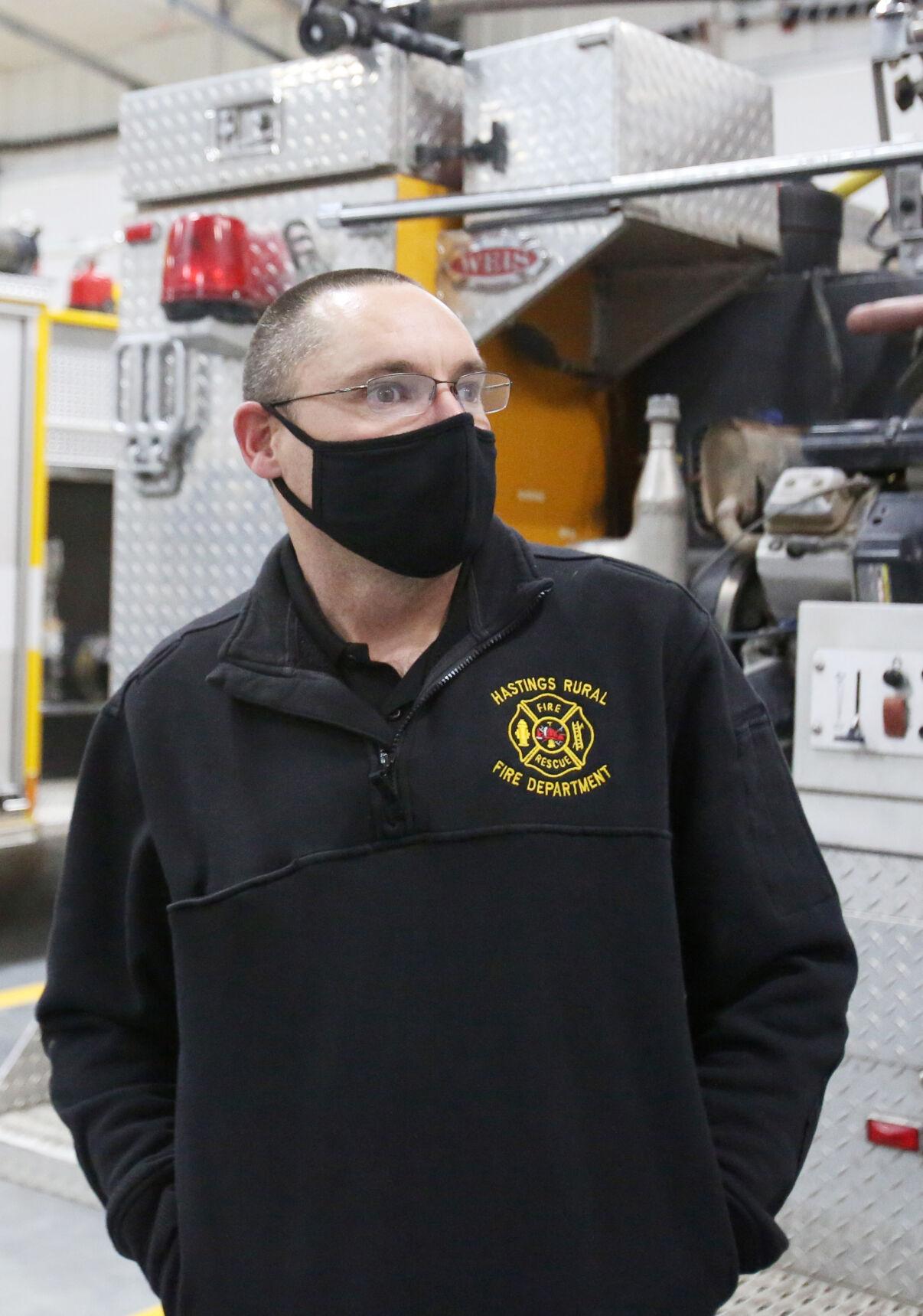 As of Thursday night, Hastings Rural Fire had had two calls: A medical call on Thursday morning and a traffic crash on Dec. 11.

“So far, everything has run smooth,” Hamik said. “I guess time will tell if everything continues that way.”

The 8,100-square-foot steel building was constructed by contractor Ayr Construction with liner panels on the inside and a standing seam metal roof. 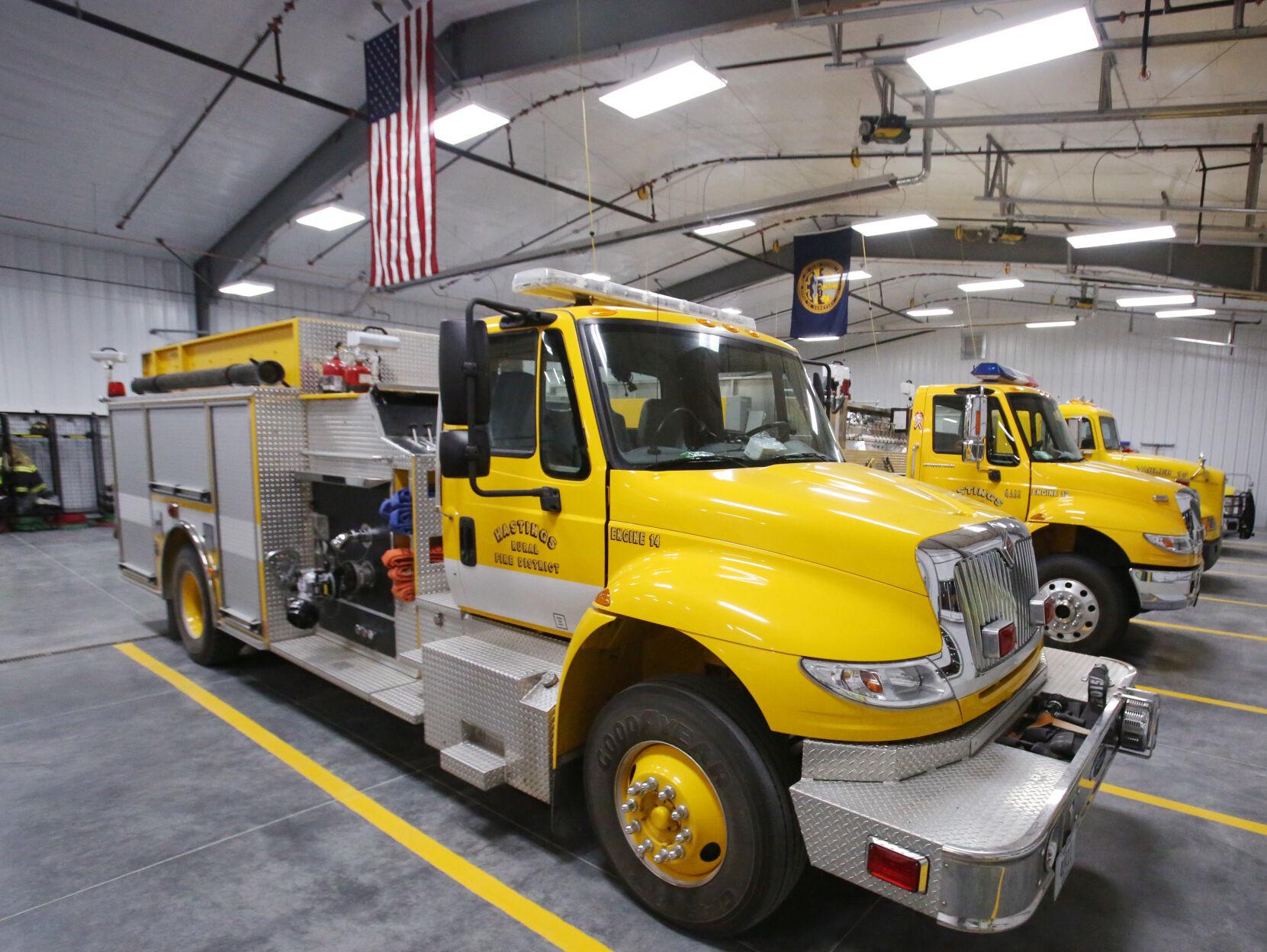 The new Hastings Rural Fire District station has room to house all their trucks and equipment as well as room for training.

“It meant a lot to me to be able to build this fire station because I served on the department for so long. I really wanted it and was happy I got it,” Gangwish said. “It turned out really nice for them.”

Most of Hastings Rural Fire’s 26 members live within a couple miles of the new station.

The station’s location also is fitting given the district’s boundaries, including Adams Central Avenue to the west, the Hall County line to the north, a mile south of Ayr to the south and seven miles into Clay County to the east.

Beau Huffman not only knows a thing or two about nutrition but he also knows how to adapt when you’re suddenly forced to make changes.

Huffman owns 1 Great Nutrition, a health and wellness store in Hastings that sells supplements that help fill nutritional gaps and deficiencies that aren’t being met through the dietary food intake.

He opened his store on South Burlington Avenue six months ago after corporate shut down the three Great Nutrition Center stores he was running in Hastings, Grand Island and Kearney.

“I’m literally staring over from scratch with nothing but some products I brought with me from my stores and my knowledge,” Huffman said.

Huffman, who has been working in the health and wellness business for 20 years, has been down this road before.

Huffman got his start in 2002 running the GNC store in the Imperial Mall. Over the years, he started owning and operating the Grand Island and Kearney GNC stores, as well.

As the Imperial Mall went through some ownership changes before eventually closing, he was forced to find another location in Hastings.

“We moved out of there and actually packed up the entire store and moved everything in my garage and basement for a month before we found a place to land,” Huffman said.

After the corporate decision in March to close his three stores, he said many of his customers in Hastings urged him to find a way to still provide his services.

As a result of that feedback, he decided to start over.

Huffman said one of 1 Great Nutrition’s main goals is to help people find what works best for them.

“It’s an individual experience for each and every single person that comes through the doors,” he said. “We start by asking different probing questions to really dig into what the meat of the issue is.”

Once that is done, he can give that individual the information needed to decide what will work best for them.

“We’re there to educate them so that they can make a good quality educated decision for themselves,” Huffman said. “My main driving force is to see the results and the success that different people are having from using the different products that we have.”

Huffman said 1 Great Nutrition has the ability and everything else it takes for any customer to get the results they want.

“We really are across the board,” he said, “From your head down to your toes and everything in between we have something for you.” 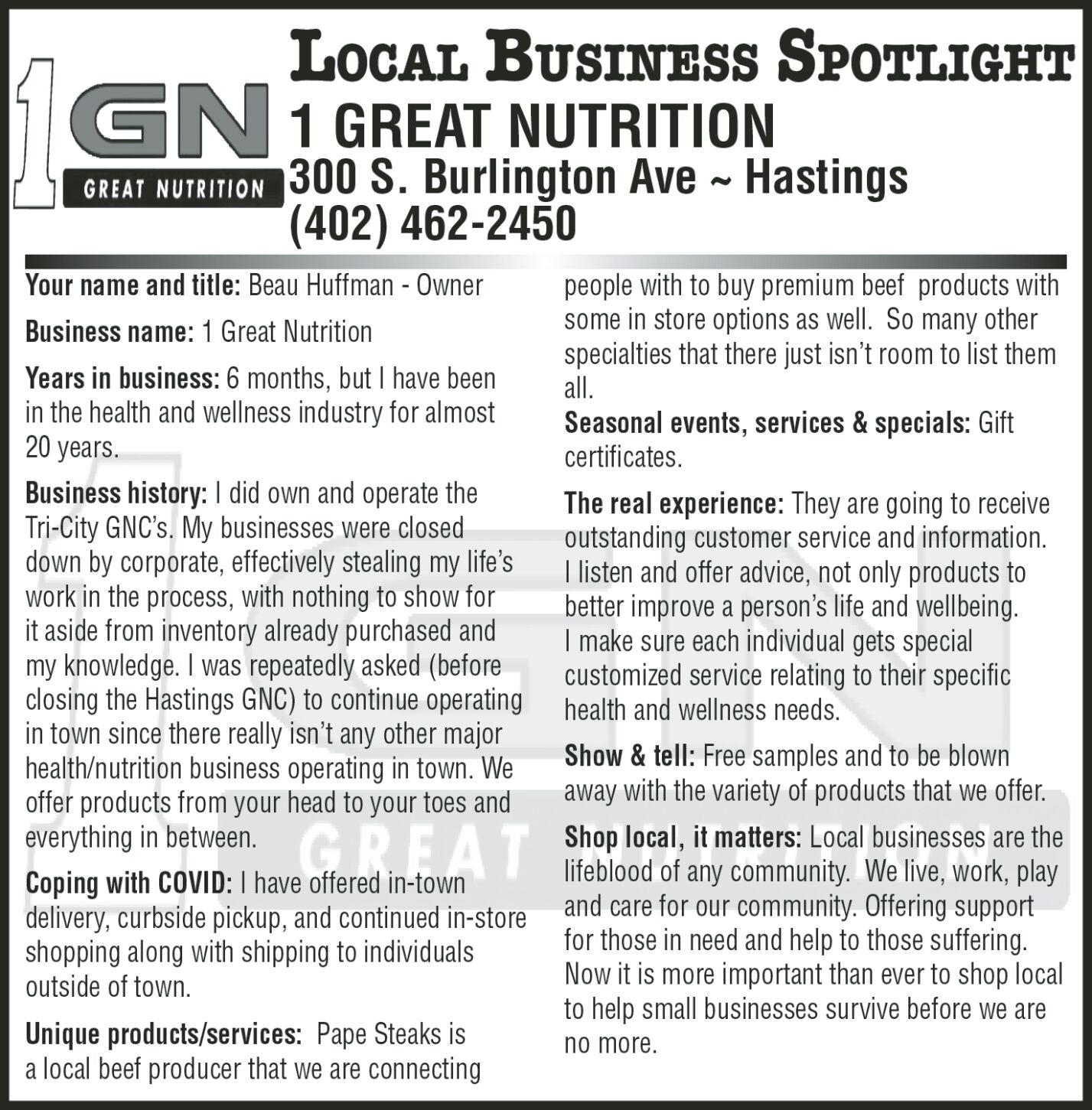 “I’m literally staring over from scratch with nothing but some products I brought with me from my stores and my knowledge.” Beau Huffman, 1 Great Nutrition