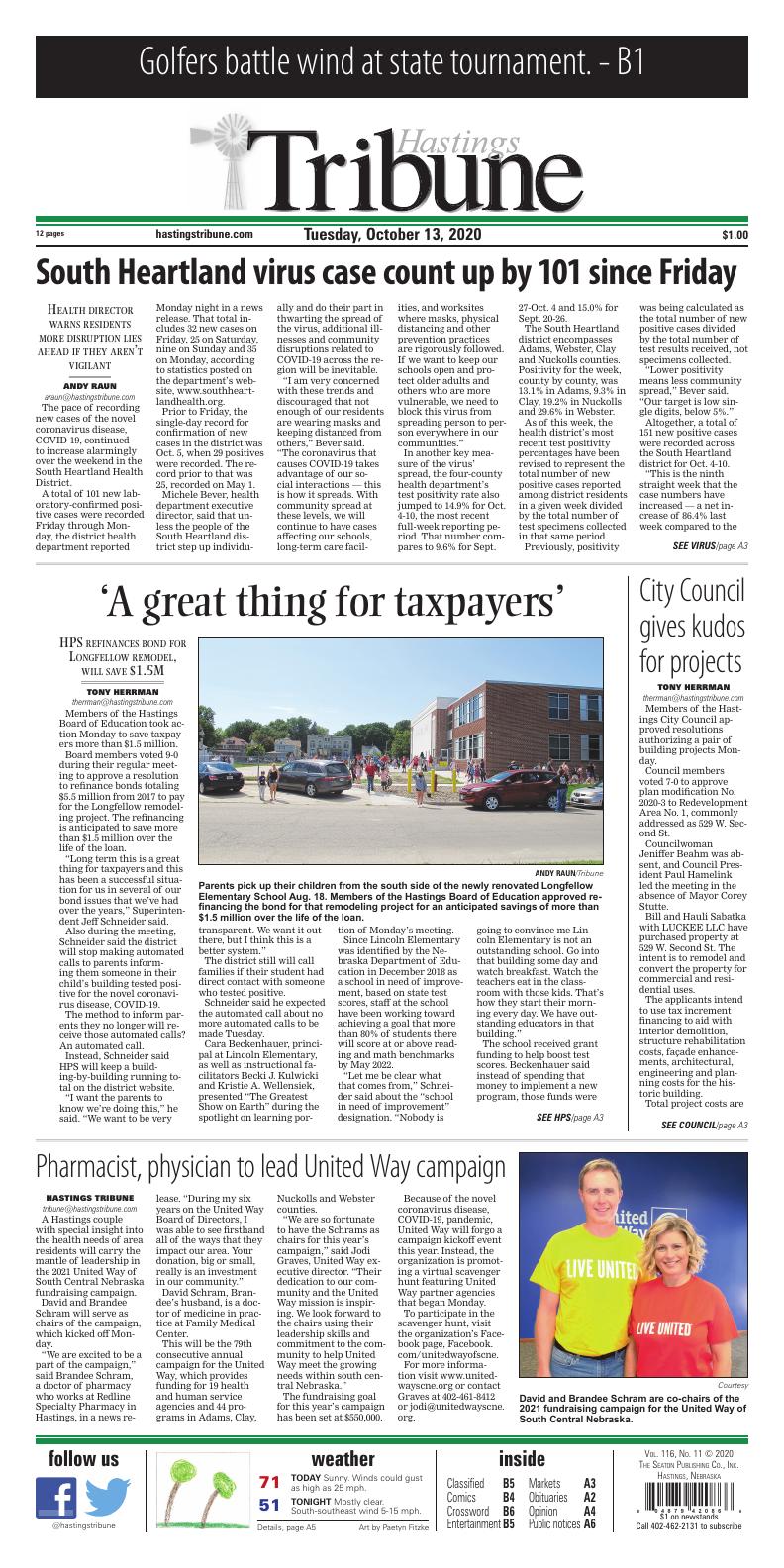 Michele Bever, executive director of the South Heartland District Health Department, speaks during a news conference Feb. 27 about area novel coronavirus planning and prevention. Bever announced April 18 that a woman in her 80s was the first death related to COVID-19 in Adams County.

The pace of recording new cases of the novel coronavirus disease, COVID-19, continued to increase alarmingly over the weekend in the South Heartland Health District.

A total of 101 new laboratory-confirmed positive cases were recorded Friday through Monday, the district health department reported Monday night in a news release. That total includes 32 new cases on Friday, 25 on Saturday, nine on Sunday and 35 on Monday, according to statistics posted on the department’s website, www.southheartlandhealth.org.

Prior to Friday, the single-day record for confirmation of new cases in the district was Oct. 5, when 29 positives were recorded. The record prior to that was 25, recorded on May 1.

Michele Bever, health department executive director, said that unless the people of the South Heartland district step up individually and do their part in thwarting the spread of the virus, additional illnesses and community disruptions related to COVID-19 across the region will be inevitable.

“I am very concerned with these trends and discouraged that not enough of our residents are wearing masks and keeping distanced from others,” Bever said. “The coronavirus that causes COVID-19 takes advantage of our social interactions — this is how it spreads. With community spread at these levels, we will continue to have cases affecting our schools, long-term care facilities, and worksites where masks, physical distancing and other prevention practices are rigorously followed. If we want to keep our schools open and protect older adults and others who are more vulnerable, we need to block this virus from spreading person to person everywhere in our communities.”

The South Heartland district encompasses Adams, Webster, Clay and Nuckolls counties. Positivity for the week, county by county, was 13.1% in Adams, 9.3% in Clay, 19.2% in Nuckolls and 29.6% in Webster.

As of this week, the health district’s most recent test positivity percentages have been revised to represent the total number of new positive cases reported among district residents in a given week divided by the total number of test specimens collected in that same period.

Altogether, a total of 151 new positive cases were recorded across the South Heartland district for Oct. 4-10.

“This is the ninth straight week that the case numbers have increased — a net increase of 86.4% last week compared to the week before,” Bever said.

A total of five district residents were admitted to hospitals for treatment of COVID-19 during that one-week span. One additional resident was admitted to a hospital on Sunday.

Bever said COVID-19 can be a severe disease and urged residents to take it seriously.

“Please take steps to protect others and yourselves, everywhere you go, in everything you do,” she said. 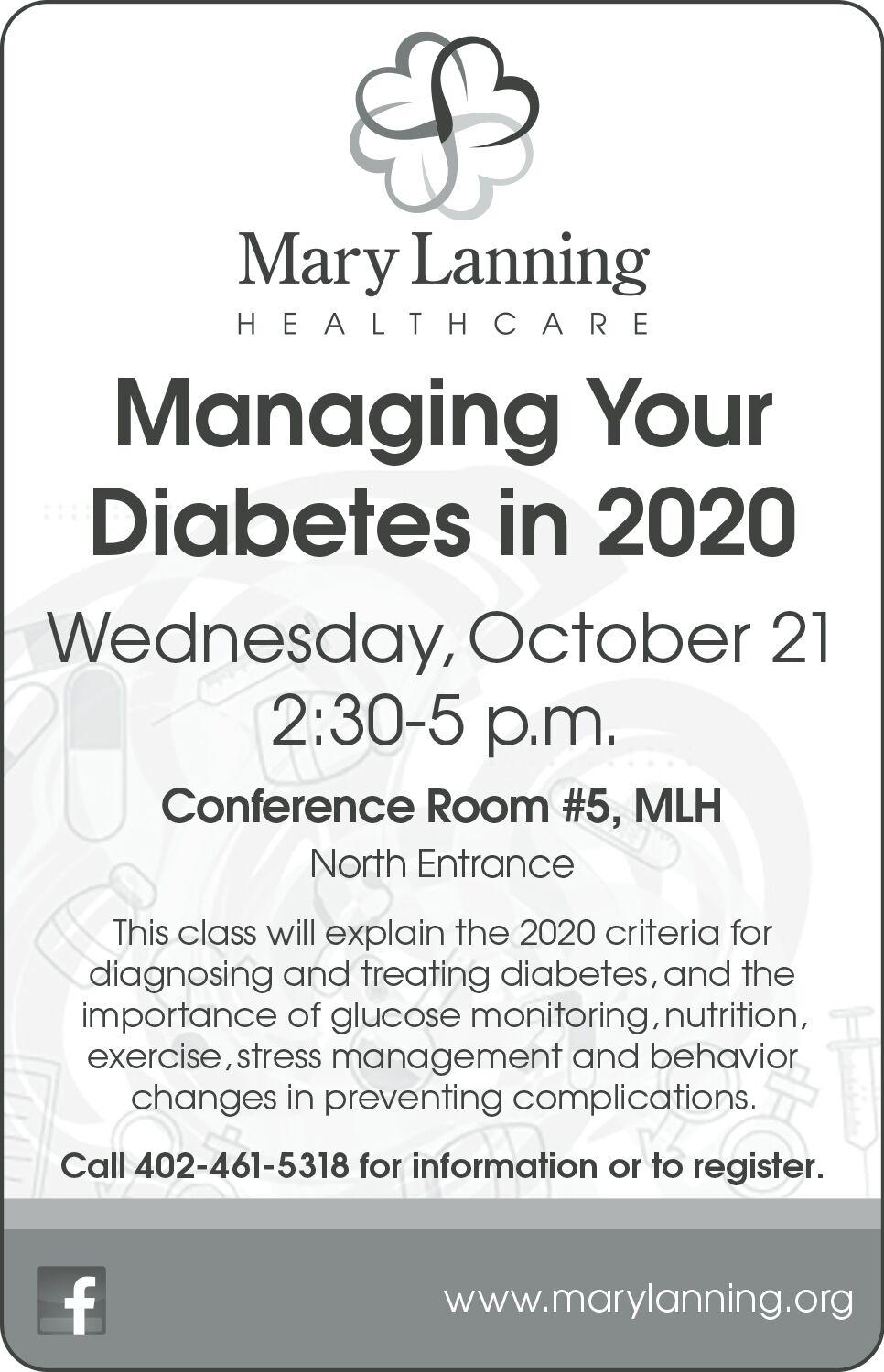 Parents pick up their children from the south side of the newly renovated Longfellow Elementary School Aug. 18. Members of the Hastings Board of Education approved refinancing the bond for that remodeling project for an anticipated savings of more than $1.5 million over the life of the loan.

Members of the Hastings Board of Education took action Monday to save taxpayers more than $1.5 million.

Board members voted 9-0 during their regular meeting to approve a resolution to refinance bonds totaling $5.5 million from 2017 to pay for the Longfellow remodeling project. The refinancing is anticipated to save more than $1.5 million over the life of the loan.

“Long term this is a great thing for taxpayers and this has been a successful situation for us in several of our bond issues that we’ve had over the years,” Superintendent Jeff Schneider said.

Also during the meeting, Schneider said the district will stop making automated calls to parents informing them someone in their child’s building tested positive for the novel coronavirus disease, COVID-19.

Instead, Schneider said HPS will keep a building-by-building running total on the district website.

“I want the parents to know we’re doing this,” he said. “We want to be very transparent. We want it out there, but I think this is a better system.”

The district still will call families if their student had direct contact with someone who tested positive.

Cara Beckenhauer, principal at Lincoln Elementary, as well as instructional facilitators Becki J. Kulwicki and Kristie A. Wellensiek, presented “The Greatest Show on Earth” during the spotlight on learning portion of Monday’s meeting.

Since Lincoln Elementary was identified by the Nebraska Department of Education in December 2018 as a school in need of improvement, based on state test scores, staff at the school have been working toward achieving a goal that more than 80% of students there will score at or above reading and math benchmarks by May 2022.

“Let me be clear what that comes from,” Schneider said about the “school in need of improvement” designation. “Nobody is going to convince me Lincoln Elementary is not an outstanding school. Go into that building some day and watch breakfast. Watch the teachers eat in the classroom with those kids. That’s how they start their morning every day. We have outstanding educators in that building.”

The school received grant funding to help boost test scores. Beckenhauer said instead of spending that money to implement a new program, those funds were invested back into the school’s teachers by way of professional development emphasizing small-group reading instruction.

The board also unanimously approved the Hastings Education Association as the exclusive bargaining agent for the 2022-23 school year. 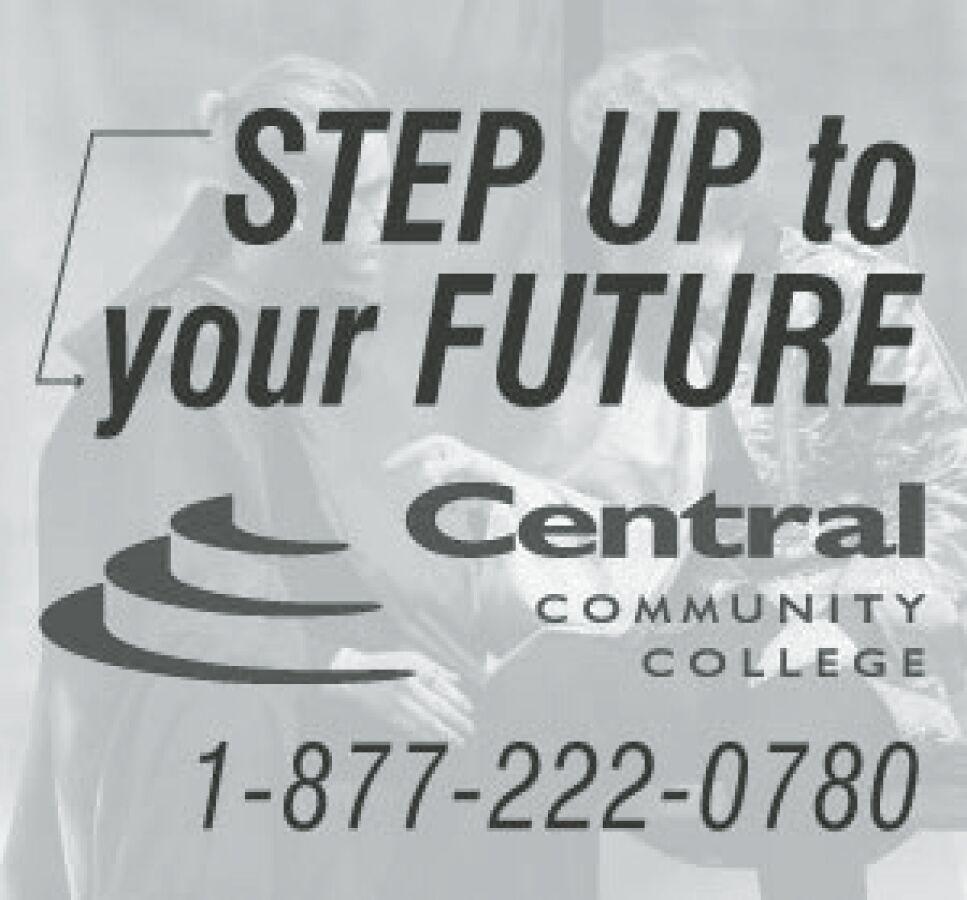 David and Brandee Schram are co-chairs of the 2021 fundraising campaign for the United Way of South Central Nebraska.

A Hastings couple with special insight into the health needs of area residents will carry the mantle of leadership in the 2021 United Way of South Central Nebraska fundraising campaign.

David and Brandee Schram will serve as chairs of the campaign, which kicked off Monday.

“We are excited to be a part of the campaign,” said Brandee Schram, a doctor of pharmacy who works at Redline Specialty Pharmacy in Hastings, in a news release. “During my six years on the United Way Board of Directors, I was able to see firsthand all of the ways that they impact our area. Your donation, big or small, really is an investment in our community.”

David Schram, Brandee’s husband, is a doctor of medicine in practice at Family Medical Center.

This will be the 79th consecutive annual campaign for the United Way, which provides funding for 19 health and human service agencies and 44 programs in Adams, Clay, Nuckolls and Webster counties.

“We are so fortunate to have the Schrams as chairs for this year’s campaign,” said Jodi Graves, United Way executive director. “Their dedication to our community and the United Way mission is inspiring. We look forward to the chairs using their leadership skills and commitment to the community to help United Way meet the growing needs within south central Nebraska.”

The fundraising goal for this year’s campaign has been set at $550,000.

Because of the novel coronavirus disease, COVID-19, pandemic, United Way will forgo a campaign kickoff event this year. Instead, the organization is promoting a virtual scavenger hunt featuring United Way partner agencies that began Monday.

To participate in the scavenger hunt, visit the organization’s Facebook page, Facebook.com/unitedwayofscne.

Councilwoman Jeniffer Beahm was absent, and Council President Paul Hamelink led the meeting in the absence of Mayor Corey Stutte.

Bill and Hauli Sabatka with LUCKEE LLC have purchased property at 529 W. Second St. The intent is to remodel and convert the property for commercial and residential uses.

Total project costs are estimated to be $450,960. The anticipated project valuation upon completion is anticipated at $300,000 and the developer anticipates an incremental valuation increase of approximately $229,170.

“I think we’ve got to give a special thank you again to Randy Chick (executive director of the Community Redevelopment Authority) — just another thing downtown, Randy, that you have accomplished — and again to Bill Sabatka to being one of the new people downtown to renovate something,” Councilman Ted Schroeder said. “We ought to be very proud of our downtown, and thanks to both you guys.”

Councilman Scott Snell said he is excited about the project, too.

“I’ve known Bill and Hauli for many, many years,” he said. “Everything I’ve seen them do they have done very, very well and very classy.”

He said he has toured the building, which is near the Odyssey restaurant.

“I think it is a wonderful addition, and I’m excited to see the neat things that are going to transpire from this,” he said. “They are going to do a good job.”

He credited Chick as a “guiding light to get through paperwork.”

“I appreciate your mentorship, too,” Snell said.

“It’s kind of a dim light,” Chick said from his seat to laughter from the audience.

Council members also unanimously approved plan modification No. 2020-4 to Redevelopment Area No. 14 in the the parking lot of the building that houses Dunham’s Sports, Tractor Supply and Dollar Tree.

The intent is to construct a 6,200-square-foot retail center, including site acquisition and preparation, engineering, architecture and other tax increment financing eligible expenses.

The applicant intends to use TIF to aid with purchasing of the property, necessary site work, engineering, surveying and other consultant costs associated with and necessary for the redevelopment of the property.

“It will hopefully generate sales tax dollars for the community and offer services that will hopefully be new to your community. We do appreciate your support of our request in this area,” said Jon Abegglen of Kearney with Kearny Junction LLC, which owns the property.

“We’re so fortunate we’ve had such great advancement to the north out there,” Schroeder said. “I thank you being from out of town that you’d take interest in the community.”

Abegglen said his group was working to finalize an agreement to lease space to the first tenant.

“We will have some additional space to lease,” he said. “Our plan is once we get them in the building that it will make it attractive for some other business to be beside them and create a nice little project there.”

He gave credit to Chick, and also to Dave Ptak, who is currently city administrator but was city attorney when Kearny Junction purchased the property five years ago.

“We really appreciate the help and assistance we got from the city of Hastings,” Abegglen said. “It’s been remarkably easy to augment what we wanted to get done out there.”

He hopes to replace the parking lot there still in 2020.

“I don’t know if it will be possible or not, but we’re going to give it a try,” he said.

Also during the meeting, Ptak said he had received some inquiry from local residents about an event in support of President Donald Trump that is scheduled for Saturday. The staff, including the city’s insurance carrier, reviewed the event plans.

The determination was that there would be no additional requirements other than them complying with traffic regulations as well as Nebraska statutes. 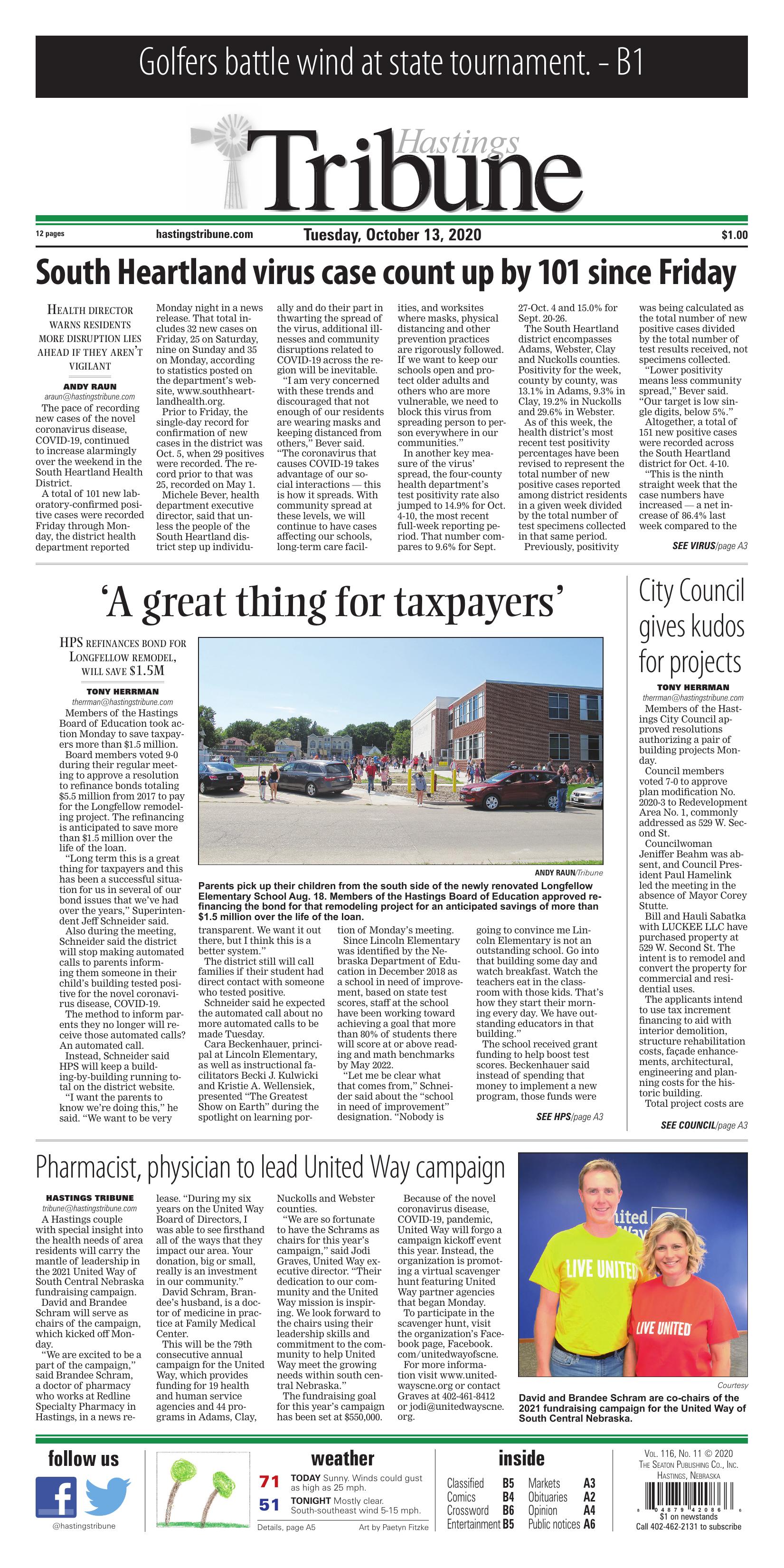