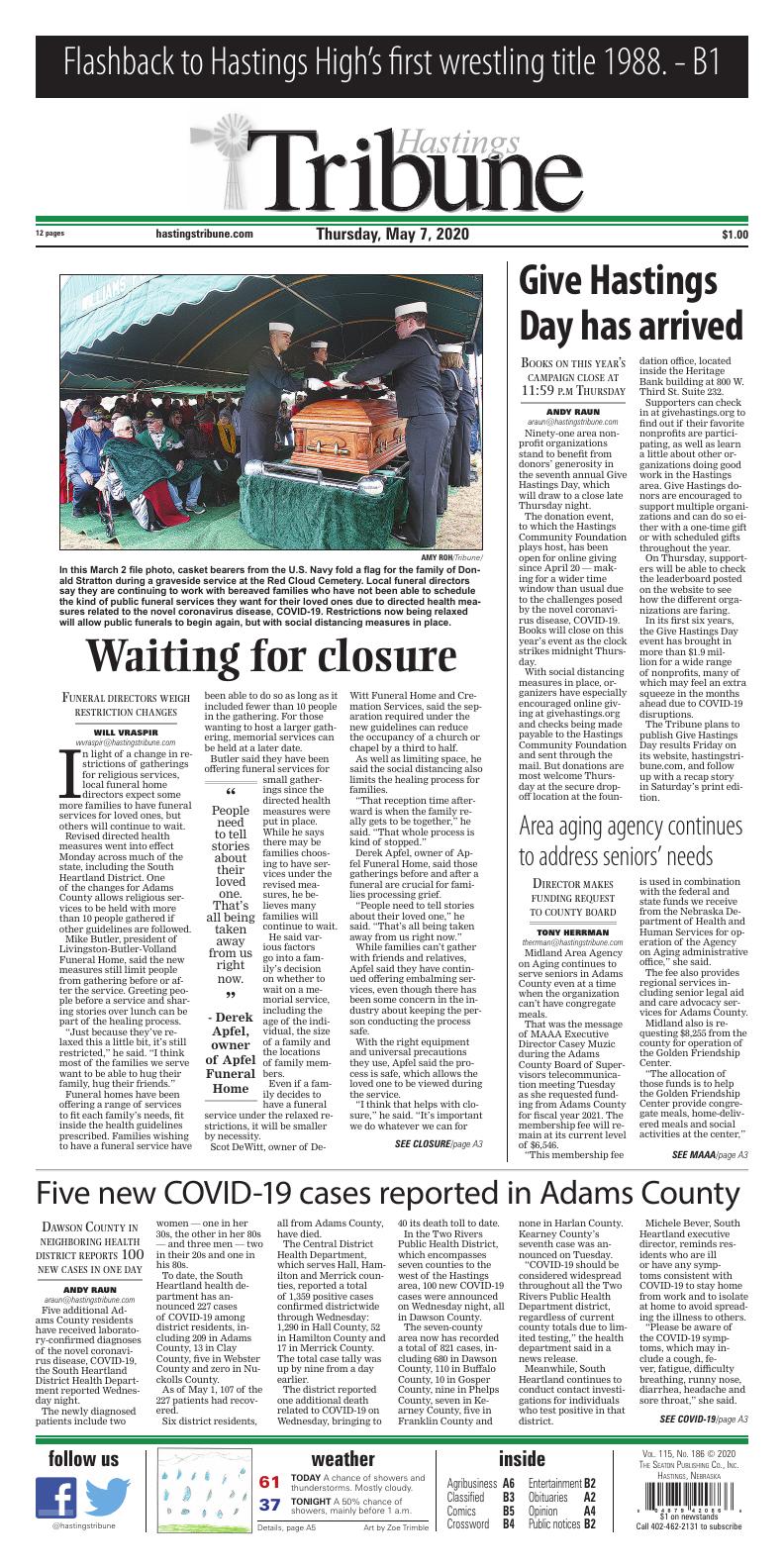 In this March 2 file photo, casket bearers from the U.S. Navy fold a flag for the family of Donald Stratton during a graveside service at the Red Cloud Cemetery. Local funeral directors say they are continuing to work with bereaved families who have not been able to schedule the kind of public funeral services they want for their loved ones due to directed health measures related to the novel coronavirus disease, COVID-19. Restrictions now being relaxed will allow public funerals to begin again, but with social distancing measures in place.

In light of a change in restrictions of gatherings for religious services, local funeral home directors expect some more families to have funeral services for loved ones, but others will continue to wait.

Revised directed health measures went into effect Monday across much of the state, including the South Heartland District. One of the changes for Adams County allows religious services to be held with more than 10 people gathered if other guidelines are followed.

Mike Butler, president of Livingston-Butler-Volland Funeral Home, said the new measures still limit people from gathering before or after the service. Greeting people before a service and sharing stories over lunch can be part of the healing process.

“Just because they’ve relaxed this a little bit, it’s still restricted,” he said. “I think most of the families we serve want to be able to hug their family, hug their friends.”

Funeral homes have been offering a range of services to fit each family’s needs, fit inside the health guidelines prescribed. Families wishing to have a funeral service have been able to do so as long as it included fewer than 10 people in the gathering. For those wanting to host a larger gathering, memorial services can be held at a later date.

Butler said they have been offering funeral services for small gatherings since the directed health measures were put in place. While he says there may be families choosing to have services under the revised measures, he believes many families will continue to wait.

He said various factors go into a family’s decision on whether to wait on a memorial service, including the age of the individual, the size of a family and the locations of family members.

Even if a family decides to have a funeral service under the relaxed restrictions, it will be smaller by necessity.

Scot DeWitt, owner of DeWitt Funeral Home and Cremation Services, said the separation required under the new guidelines can reduce the occupancy of a church or chapel by a third to half.

As well as limiting space, he said the social distancing also limits the healing process for families.

“That reception time afterward is when the family really gets to be together,” he said. “That whole process is kind of stopped.”

Derek Apfel, owner of Apfel Funeral Home, said those gatherings before and after a funeral are crucial for families processing grief.

“People need to tell stories about their loved one,” he said. “That’s all being taken away from us right now.”

While families can’t gather with friends and relatives, Apfel said they have continued offering embalming services, even though there has been some concern in the industry about keeping the person conducting the process safe.

With the right equipment and universal precautions they use, Apfel said the process is safe, which allows the loved one to be viewed during the service.

“I think that helps with closure,” he said. “It’s important we do whatever we can for the families.”

He said they have tried to go above and beyond to provide the services families want, even though there may be limitations.

“We’re trying to make this as good as we can for the families concerned,” Apfel said. “We all want to be able to get back to the way things were.”

Butler said most people have dealt well with the news of limitations in services, understanding that curbing the spread of the virus is important in ending the pandemic.

“People here have been very understanding,” he said. “We’re fortunate that Hastings is such a good community and everybody is trying to do their part to stop the spread of this virus to our community.”

Funeral homes are making lists of families wanting to wait to have a memorial service at a later date. Some are being scheduled in June or July, with hopes that the directed health measures will be lifted by then.

If that doesn’t happen, DeWitt said they plan to reschedule them for a later time and wait to see that things look like then.

He said the local health departments have been helpful in making sure they are able to follow the guidelines set out in the health measures.

“They’ve assisted funeral homes on providing extra PPE, hand sanitizer and those kind of things,” DeWitt said. “They make sure they have stuff that may be a little more difficult to obtain.”

Overall, he believes that the pandemic may have a lasting effect on the industry, but hopes that isn’t the case. Physical expressions like hugging or handshakes provide comfort to grieving families and he hopes those things won’t go away.

“I don’t think we’re going to wake up and go back to what we used to do,” he said. “I think it will be a learning curve. Shaking hands and hugging people are in a funeral director’s DNA.” 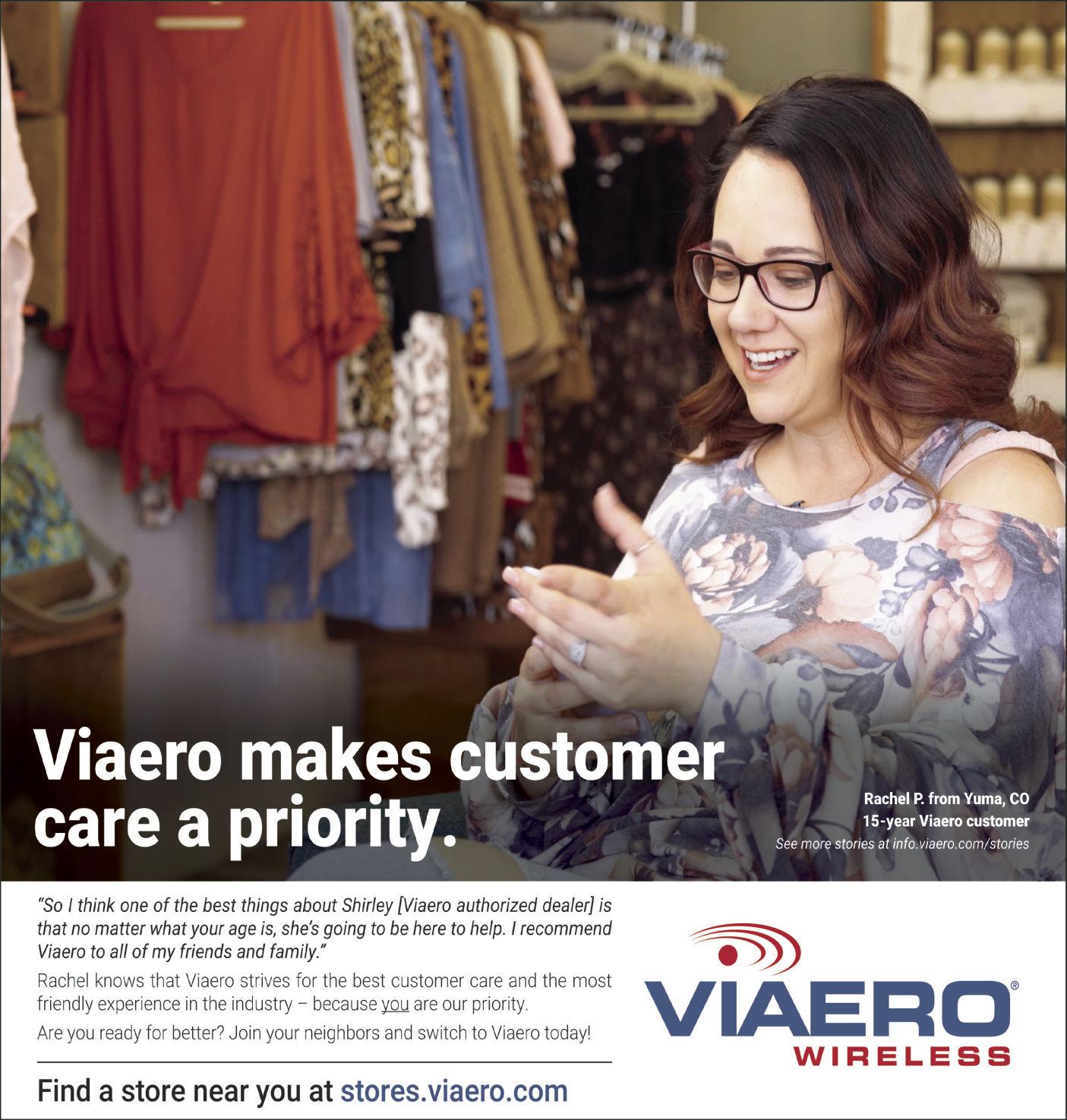 Ninety-one area nonprofit organizations stand to benefit from donors’ generosity in the seventh annual Give Hastings Day, which will draw to a close late Thursday night.

The donation event, to which the Hastings Community Foundation plays host, has been open for online giving since April 20 — making for a wider time window than usual due to the challenges posed by the novel coronavirus disease, COVID-19. Books will close on this year’s event as the clock strikes midnight Thursday.

With social distancing measures in place, organizers have especially encouraged online giving at givehastings.org and checks being made payable to the Hastings Community Foundation and sent through the mail. But donations are most welcome Thursday at the secure drop-off location at the foundation office, located inside the Heritage Bank building at 800 W. Third St. Suite 232.

Supporters can check in at givehastings.org to find out if their favorite nonprofits are participating, as well as learn a little about other organizations doing good work in the Hastings area. Give Hastings donors are encouraged to support multiple organizations and can do so either with a one-time gift or with scheduled gifts throughout the year.

On Thursday, supporters will be able to check the leaderboard posted on the website to see how the different organizations are faring.

In its first six years, the Give Hastings Day event has brought in more than $1.9 million for a wide range of nonprofits, many of which may feel an extra squeeze in the months ahead due to COVID-19 disruptions.

The Tribune plans to publish Give Hastings Day results Friday on its website, hastingstribune.com, and follow up with a recap story in Saturday’s print edition.

Midland Area Agency on Aging continues to serve seniors in Adams County even at a time when the organization can’t have congregate meals.

That was the message of MAAA Executive Director Casey Muzic during the Adams County Board of Supervisors telecommunication meeting Tuesday as she requested funding from Adams County for fiscal year 2021. The membership fee will remain at its current level of $6,546.

“This membership fee is used in combination with the federal and state funds we receive from the Nebraska Department of Health and Human Services for operation of the Agency on Aging administrative office,” she said.

Midland also is requesting $8,255 from the county for operation of the Golden Friendship Center.

“The allocation of those funds is to help the Golden Friendship Center provide congregate meals, home-delivered meals and social activities at the center,” she said.

It also includes funding for homemaker and chore support, which includes help with heavy housekeeping, lawn mowing, a first alert system, and funds if seniors need help with caregiving at home.

“We continue to be committed to helping seniors in Adams County,” Muzic said. “As you know, the senior center is closed because of COVID-19.”

Faced with the social distancing restrictions that have been implemented due to the novel coronavirus disease, COVID-19, pandemic, Midland transitioned to providing home-delivered meals and carry-out meals for people who still can drive. The organization serves about 175 people through the diner operated by the Good Samaritan Society-Hastings Village.

The Adams County senior center site director coordinated the delivery to seniors about two weeks ago of baskets containing fruits and vegetables. Midland also is trying to give out face masks as needed.

State and federal guidelines concerning how food can be disseminated have been loosened.

“To get the food out, typically we have to meet very strict nutritional requirements,” Muzic said. “They’ve loosened that up a little bit, but they still want all the dollars tracked and tied back to an individual, which is pretty typical for most of their programs, so we’re used to it.”

She said Midland received extra money to help, which will be disseminated among counties in the agency’s service area.

Midland also received funding for shelf-stable meals that the organization was able to acquire because of disaster funding following 2019 flooding.

The agency currently is working on a volunteer program that matches volunteers with seniors who need help with errands. 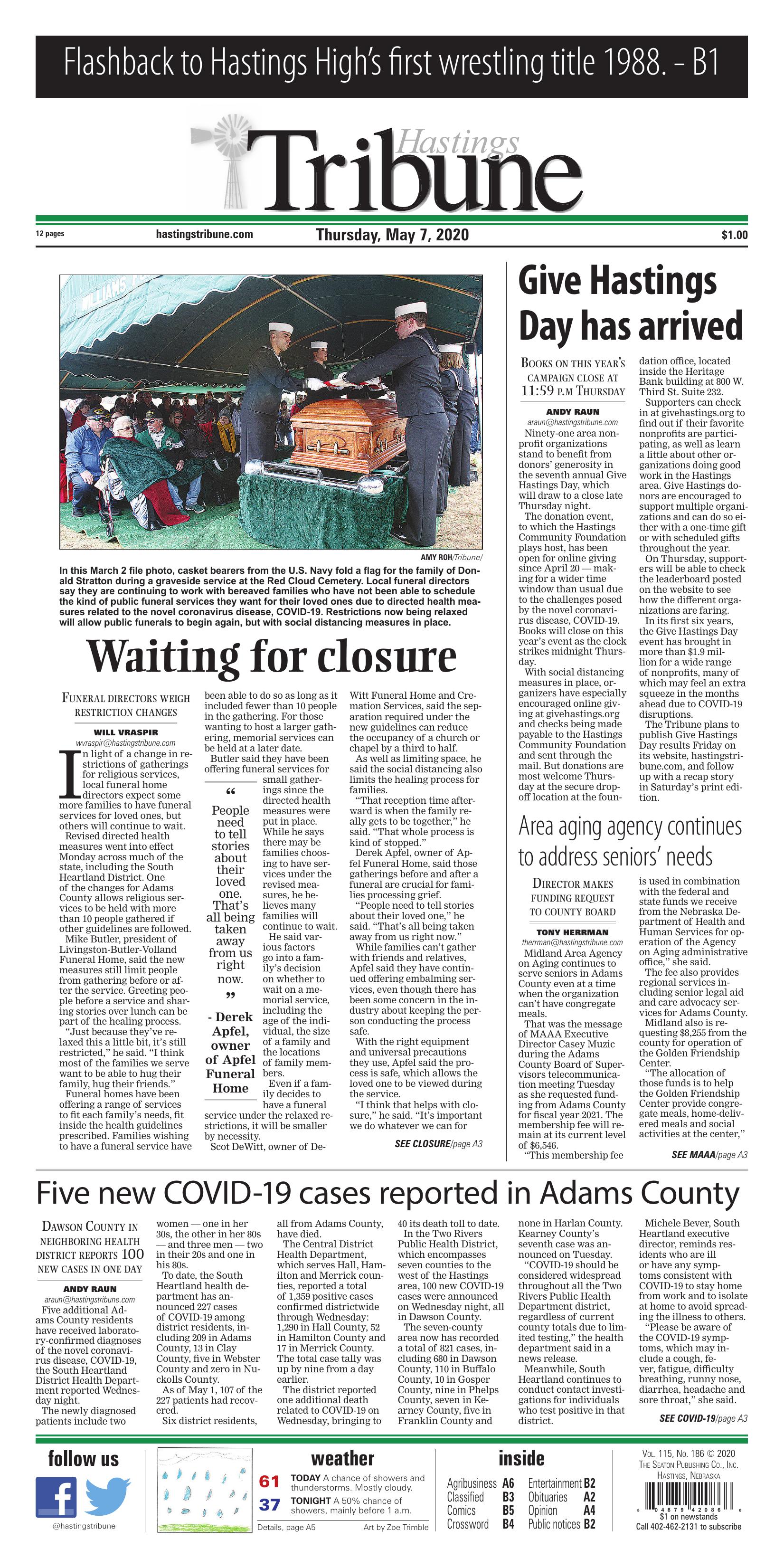