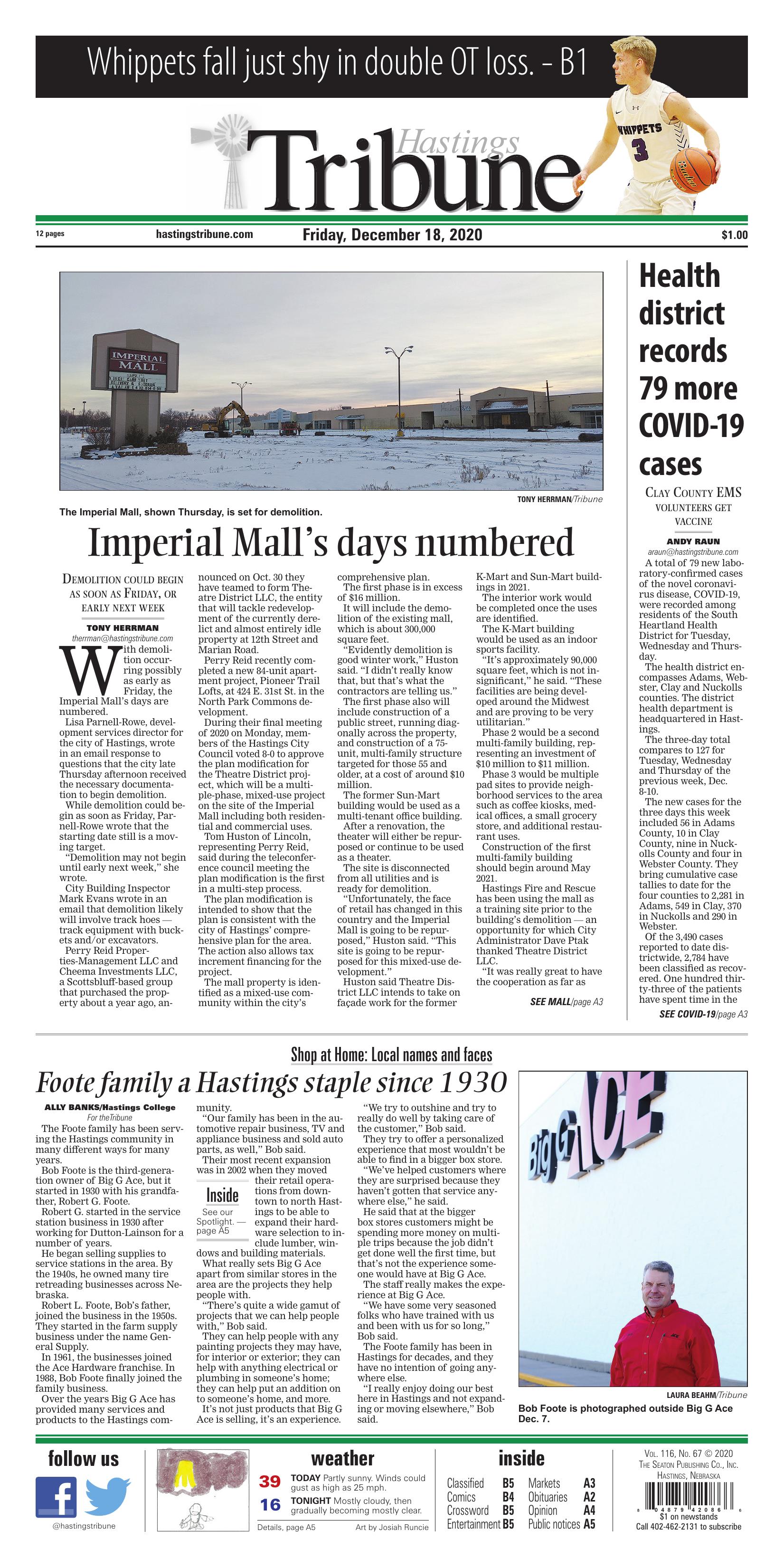 With demolition occurring possibly as early as Friday, the Imperial Mall’s days are numbered.

Lisa Parnell-Rowe, development services director for the city of Hastings, wrote in an email response to questions that the city late Thursday afternoon received the necessary documentation to begin demolition.

While demolition could begin as soon as Friday, Parnell-Rowe wrote that the starting date still is a moving target.

“Demolition may not begin until early next week,” she wrote.

Perry Reid Properties-Management LLC and Cheema Investments LLC, a Scottsbluff-based group that purchased the property about a year ago, announced on Oct. 30 they have teamed to form Theatre District LLC, the entity that will tackle redevelopment of the currently derelict and almost entirely idle property at 12th Street and Marian Road.

During their final meeting of 2020 on Monday, members of the Hastings City Council voted 8-0 to approve the plan modification for the Theatre District project, which will be a multiple-phase, mixed-use project on the site of the Imperial Mall including both residential and commercial uses.

Tom Huston of Lincoln, representing Perry Reid, said during the teleconference council meeting the plan modification is the first in a multi-step process.

The plan modification is intended to show that the plan is consistent with the city of Hastings’ comprehensive plan for the area. The action also allows tax increment financing for the project.

The mall property is identified as a mixed-use community within the city’s comprehensive plan.

The first phase is in excess of $16 million.

It will include the demolition of the existing mall, which is about 300,000 square feet.

“Evidently demolition is good winter work,” Huston said. “I didn’t really know that, but that’s what the contractors are telling us.”

The first phase also will include construction of a public street, running diagonally across the property, and construction of a 75-unit, multi-family structure targeted for those 55 and older, at a cost of around $10 million.

The former Sun-Mart building would be used as a multi-tenant office building.

After a renovation, the theater will either be repurposed or continue to be used as a theater.

The site is disconnected from all utilities and is ready for demolition.

Huston said Theatre District LLC intends to take on façade work for the former K-Mart and Sun-Mart buildings in 2021.

The interior work would be completed once the uses are identified.

The K-Mart building would be used as an indoor sports facility.

“It’s approximately 90,000 square feet, which is not insignificant,” he said. “These facilities are being developed around the Midwest and are proving to be very utilitarian.”

Phase 2 would be a second multi-family building, representing an investment of $10 million to $11 million.

Phase 3 would be multiple pad sites to provide neighborhood services to the area such as coffee kiosks, medical offices, a small grocery store, and additional restaurant uses.

Construction of the first multi-family building should begin around May 2021.

Hastings Fire and Rescue has been using the mall as a training site prior to the building’s demolition — an opportunity for which City Administrator Dave Ptak thanked Theatre District LLC.

“It was really great to have the cooperation as far as the use of that facility,” Ptak said.

“The only problem I have is that my client wanted to have a paintball tournament out there and I vetoed it.”

Councilmen Ted Schroeder and Butch Eley, who represent west Hastings including the Imperial Mall area, each also thanked Huston for the development group’s work on the project.

“In the Ward Mr. Eley and I are in, there’s very little retail out there,” Schroeder said. “I actually ran for City Council with the motivation that something would eventually happen to this area. I can’t thank you enough that you will move forward with the mixed use in there.”

He said Hastings needs to keep housing opportunities available for those 55 and older.

“We know that housing has been short in this community,” he said. “Especially, I want to be careful when I say this word, but we’re kind of an aging community.”

Schroeder said even though Hastings has quality grocery stores, the right-size grocery store on the west side would be a hit.

Eley agreed that a grocery store is key to the project.

“Ever since you came in with this plan for this multi-family housing and mixed use out there, I thought it was a great use for the property,” he said. “While I’ll always miss Video Kingdom and all of the fun I had in that mall, it’s great to see this new use put into place.”

The ambulance storage building is to house three ambulances used by Mary Lanning. These vehicles have currently either been parking on the two vacant lots north, or in the driveway at 744 N. Hastings Ave. 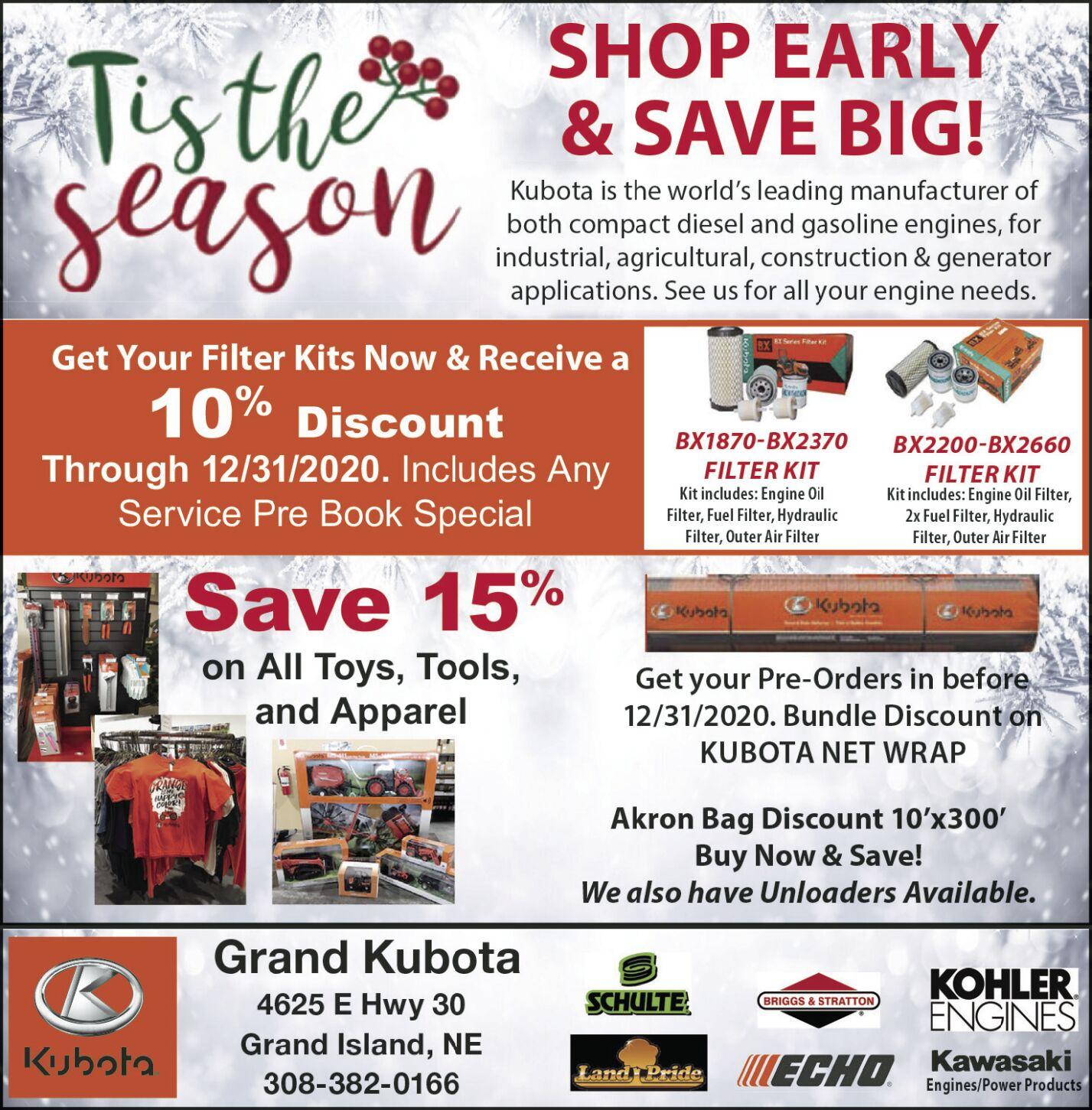 The Foote family has been serving the Hastings community in many different ways for many years.

Bob Foote is the third-generation owner of Big G Ace, but it started in 1930 with his grandfather, Robert G. Foote.

Robert G. started in the service station business in 1930 after working for Dutton-Lainson for a number of years.

He began selling supplies to service stations in the area. By the 1940s, he owned many tire retreading businesses across Nebraska.

Robert L. Foote, Bob’s father, joined the business in the 1950s. They started in the farm supply business under the name General Supply.

In 1961, the businesses joined the Ace Hardware franchise. In 1988, Bob Foote finally joined the family business.

Over the years Big G Ace has provided many services and products to the Hastings community.

“Our family has been in the automotive repair business, TV and appliance business and sold auto parts, as well,” Bob said.

Their most recent expansion was in 2002 when they moved their retail operations from downtown to north Hastings to be able to expand their hardware selection to include lumber, windows and building materials.

What really sets Big G Ace apart from similar stores in the area are the projects they help people with.

“There’s quite a wide gamut of projects that we can help people with,” Bob said.

It’s not just products that Big G Ace is selling, it’s an experience.

“We try to outshine and try to really do well by taking care of the customer,” Bob said.

They try to offer a personalized experience that most wouldn’t be able to find in a bigger box store.

“We’ve helped customers where they are surprised because they haven’t gotten that service anywhere else,” he said.

He said that at the bigger box stores customers might be spending more money on multiple trips because the job didn’t get done well the first time, but that’s not the experience someone would have at Big G Ace.

The staff really makes the experience at Big G Ace.

“We have some very seasoned folks who have trained with us and been with us for so long,” Bob said.

The Foote family has been in Hastings for decades, and they have no intention of going anywhere else.

“I really enjoy doing our best here in Hastings and not expanding or moving elsewhere,” Bob said. 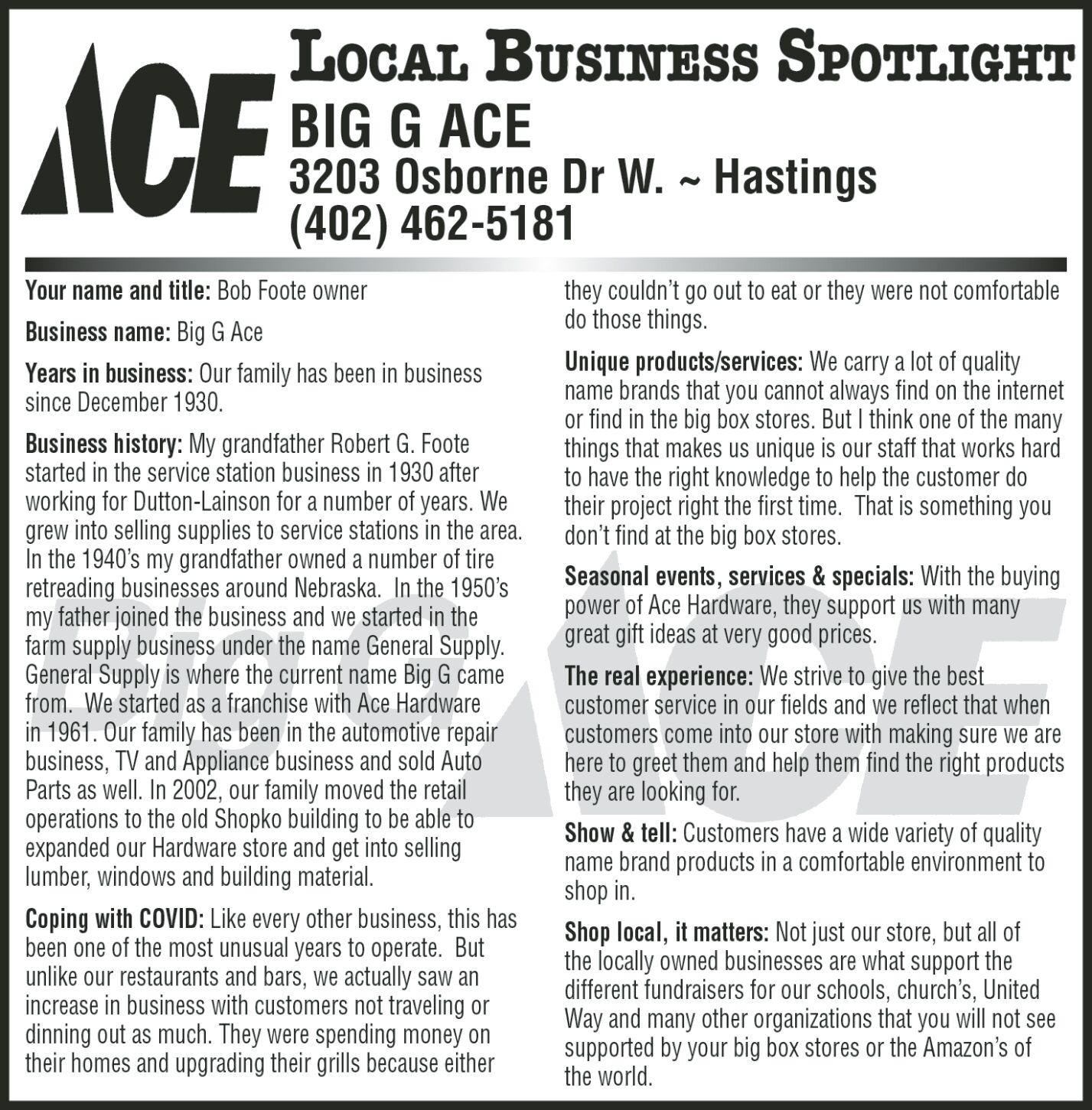 “Our family has been in the automotive repair business, TV and Appliance business and sold Auto Parts, as well.” Bob Foote, Big G Ace

A total of 79 new laboratory-confirmed cases of the novel coronavirus disease, COVID-19, were recorded among residents of the South Heartland Health District for Tuesday, Wednesday and Thursday.

The three-day total compares to 127 for Tuesday, Wednesday and Thursday of the previous week, Dec. 8-10.

The new cases for the three days this week included 56 in Adams County, 10 in Clay County, nine in Nuckolls County and four in Webster County. They bring cumulative case tallies to date for the four counties to 2,281 in Adams, 549 in Clay, 370 in Nuckolls and 290 in Webster.

Of the 3,490 cases reported to date districtwide, 2,784 have been classified as recovered. One hundred thirty-three of the patients have spent time in the hospital for treatment of COVID-19. A total of 42 individuals have lost their lives to the virus.

The district’s first positive case was announced on March 18.

A reduction in numbers of new cases and a drop in the test positivity rate were among factors cited Wednesday when South Heartland’s risk dial reading received its weekly update and was lowered from 3.2 to 2.8 — a change that moved the needle from the red (severe) zone to the orange (elevated) zone.

Public health officials are urging Nebraskans to remain vigilant in taking precautions to help thwart further spread of the virus, even as vaccines begin to arrive in the state in limited numbers.

Workers with direct patient contact, including EMS personnel, are prioritized to receive the first doses of the vaccine, Bever said.

“Our rural volunteer ambulance crews provide critical health care and put their own lives at risk to serve their communities,” she said. “It is an honor to be able to offer them another level of protection from COVID-19.”

As more vaccine arrives over the next couple of weeks, long-term care facility staff and residents will be vaccinated, hospitals will use their allotments for the rest of their staff who have patient contact, health departments will continue working to assure that all EMS personnel who want the vaccine are vaccinated, and primary care providers will begin receiving vaccinations for COVID-19.

Bever said additional health care workers are prioritized to receive the vaccine during the first phase.

Under Nebraska’s vaccine distribution plan, next in line for vaccine will be critical infrastructure personnel, including utilities workers, education sector employees, food and agricultural workers, transportation workers, and non-EMS first responders. The third priority group to receive the vaccine will be people over 65 years of age and other vulnerable populations.

“Until the vaccine becomes widely available next year, it will be important for everyone to help slow the spread of the virus by continuing to avoid the three Cs: avoid crowded places, avoid close contact, and avoid confined spaces,” Bever said. 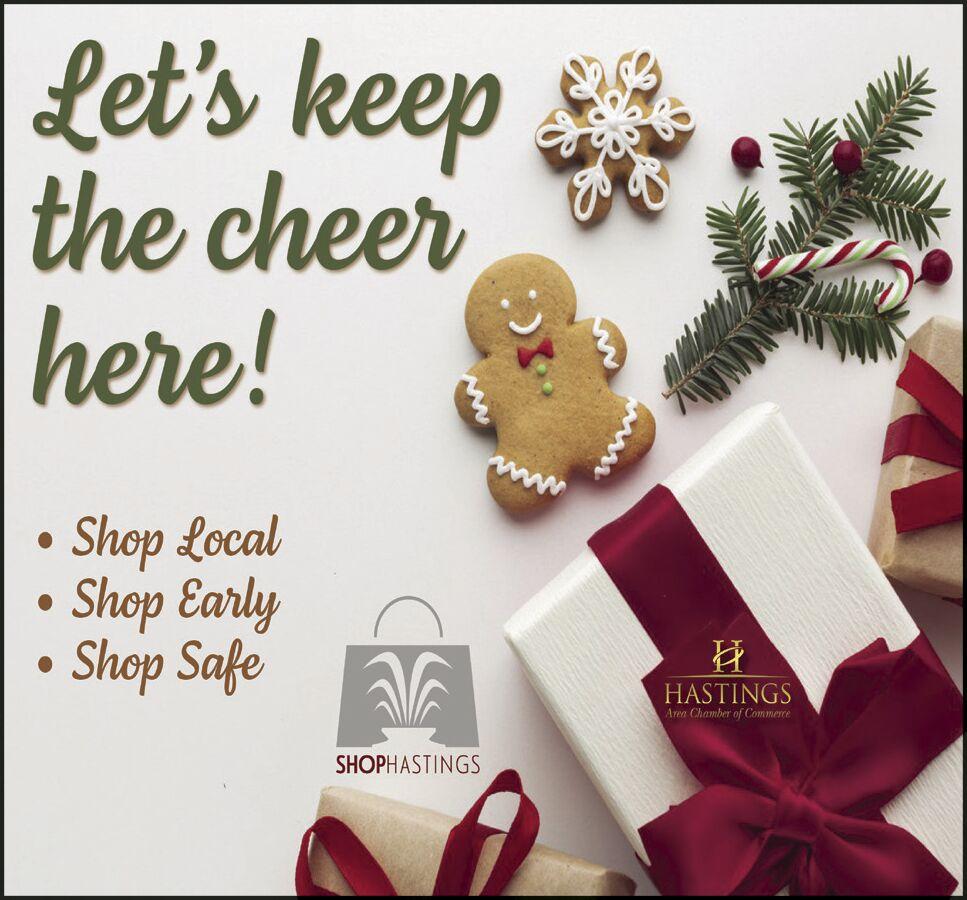