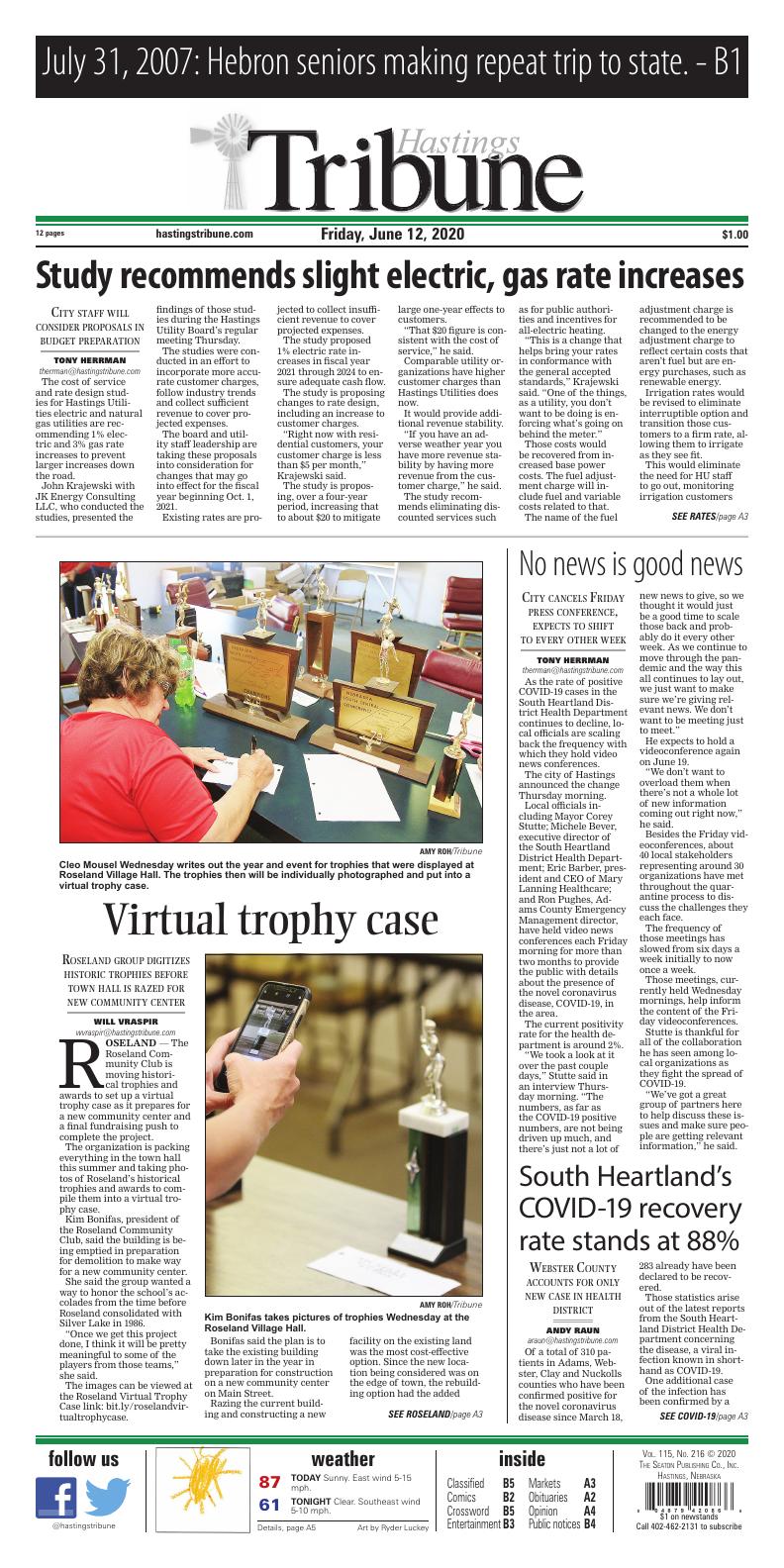 The cost of service and rate design studies for Hastings Utilities electric and natural gas utilities are recommending 1% electric and 3% gas rate increases to prevent larger increases down the road.

John Krajewski with JK Energy Consulting LLC, who conducted the studies, presented the findings of those studies during the Hastings Utility Board’s regular meeting Thursday.

The board and utility staff leadership are taking these proposals into consideration for changes that may go into effect for the fiscal year beginning Oct. 1, 2021.

The study is proposing changes to rate design, including an increase to customer charges.

“Right now with residential customers, your customer charge is less than $5 per month,” Krajewski said.

The study is proposing, over a four-year period, increasing that to about $20 to mitigate large one-year effects to customers.

“That $20 figure is consistent with the cost of service,” he said.

It would provide additional revenue stability.

The study recommends eliminating discounted services such as for public authorities and incentives for all-electric heating.

“This is a change that helps bring your rates in conformance with the general accepted standards,” Krajewski said. “One of the things, as a utility, you don’t want to be doing is enforcing what’s going on behind the meter.”

Those costs would be recovered from increased base power costs. The fuel adjustment charge will include fuel and variable costs related to that.

Irrigation rates would be revised to eliminate interruptible option and transition those customers to a firm rate, allowing them to irrigate as they see fit.

This would eliminate the need for HU staff to go out, monitoring irrigation customers to make sure they are shutting off at 4 p.m. on a hot, summer day.

According to the study, the proposed residential electric monthly bill would be $88.14 for 1,000 kilowatt hours per month. That amount would be an increase of $1.30 over the existing rate of $86.84.

“The net of all of these is that even though your customer charge is going up more than $3, your energy and energy adjustment cost is going down to get to the ultimate $1.30 increase in the monthly bill,” Krajewski said.

The natural gas cost of service and rate design service study proposes a series of 3% rate increases through 2023.

The customer charge needs to be increased because it doesn’t currently cover the cost of service.

The Purchased Gas Adjustment clause should be modified to reflect the collection of costs and implements true up calculation.

Natural gas costs have decreased over time to an amount less than the base costs included in HU rates.

According to recommendations from JK Energy, a typical residential bill would go from $41.17 to $42.40. The customer charge would increase from $4.41 to $8.

“What we’ve done effectively is move some costs from the gas supply costs and PGA charge down into customer charge, but overall the customer would see an increase of about $1.23 per month,” Krajewski said.

The study stated that without the proposed 3% rate increases, the $7 million rate stabilization fund would be exhausted.

City Administrator Dave Ptak asked about using some of that fund, so the full 3% rate increase wasn’t needed.

Krajewski said $7 million might be a little on the high side, but some rate stabilization funds are needed.

“My primary concern is if you do nothing then it goes to $0 and you have to raise rates 15%,” he said.

Krajewski said his proposal calls for using some rate stabilization funds to allow a phased increase.

He said $5 million to $7 million is the ideal range for the rate stabilization fund.

With all of the proposed rate increases, Krajewski said by 2023, the operating revenue would be consistent with the operating expenses and projected capital improvements.

It also suggests exploring ways to mitigate the impact on the largest users within rate classes.

The initial analysis shows the typical residential cost of $5 per month.

While higher than the current rate, this is lower than calculated amount using JK Energy’s proposed weighted rates based on the fiscal year 2020 budget.

In other business, utility board members:

Unanimously approved recommending awarding a contract for a 2021 Peterbilt 567 6x4 cab and chassis with an Altec hydraulic telescopic crane for $469,429.

ROSELAND — The Roseland Community Club is moving historical trophies and awards to set up a virtual trophy case as it prepares for a new community center and a final fundraising push to complete the project.

The organization is packing everything in the town hall this summer and taking photos of Roseland’s historical trophies and awards to compile them into a virtual trophy case.

Kim Bonifas, president of the Roseland Community Club, said the building is being emptied in preparation for demolition to make way for a new community center.

She said the group wanted a way to honor the school’s accolades from the time before Roseland consolidated with Silver Lake in 1986.

“Once we get this project done, I think it will be pretty meaningful to some of the players from those teams,” she said.

The images can be viewed at the Roseland Virtual Trophy Case link: bit.ly/roselandvirtualtrophycase. 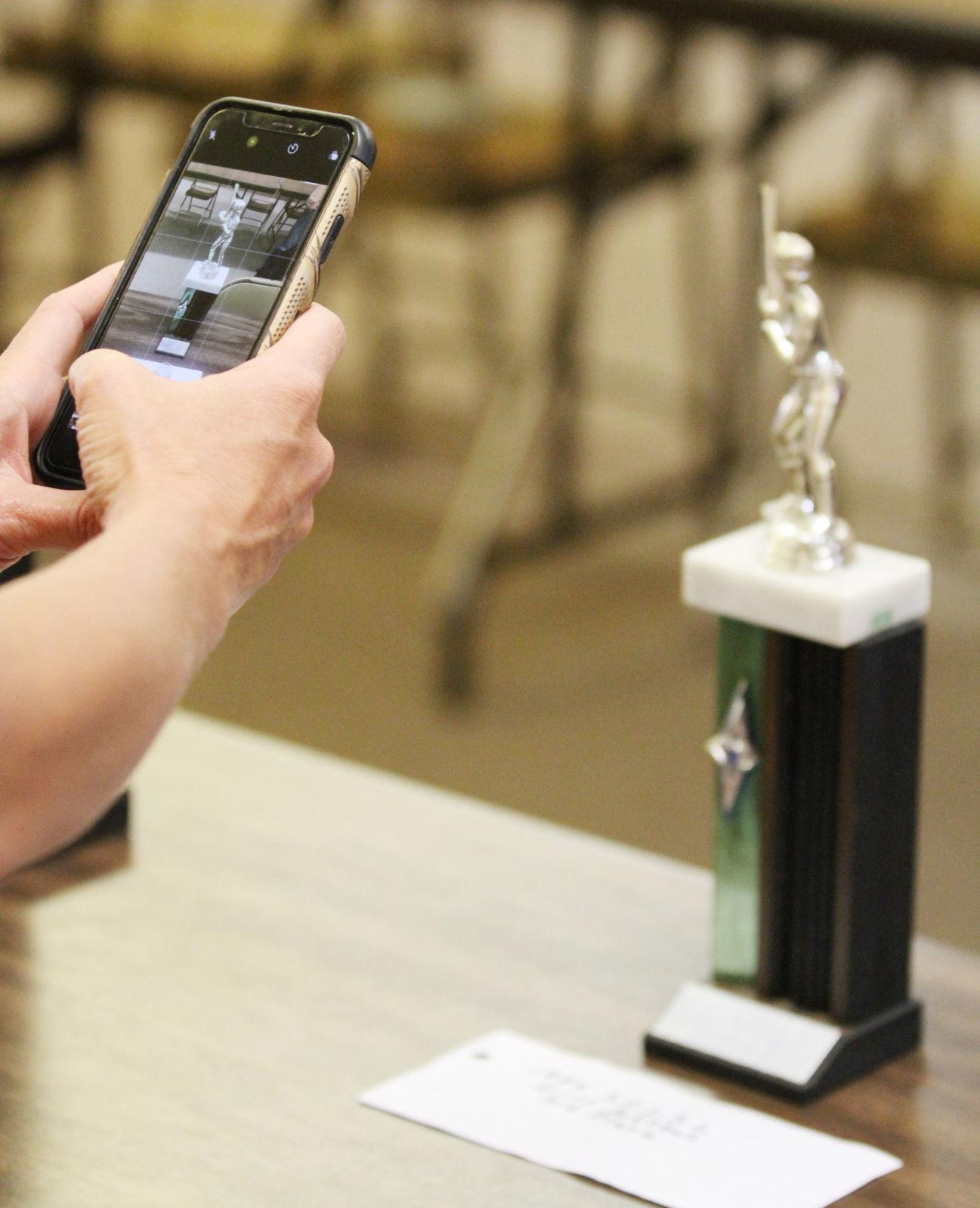 Bonifas said the plan is to take the existing building down later in the year in preparation for construction on a new community center on Main Street.

Razing the current building and constructing a new facility on the existing land was the most cost-effective option. Since the new location being considered was on the edge of town, the rebuilding option had the added benefit of keeping it in the downtown area.

“We just didn’t want to abandon Main Street,” she said.

The group has a designated place in the new building for all of the trophies and awards to be displayed once complete.

The project will be funded through community donations and a $375,000 Civic and Community Center Financing Fund matching grant from the Nebraska Department of Economic Development. As a matching grant, the village is eligible to receive funds up to that amount if matching funds are donated by the community. Bonifas said they have secured most of the funds needed to match the grant and are on a final drive to raise enough money to completely match the grant. 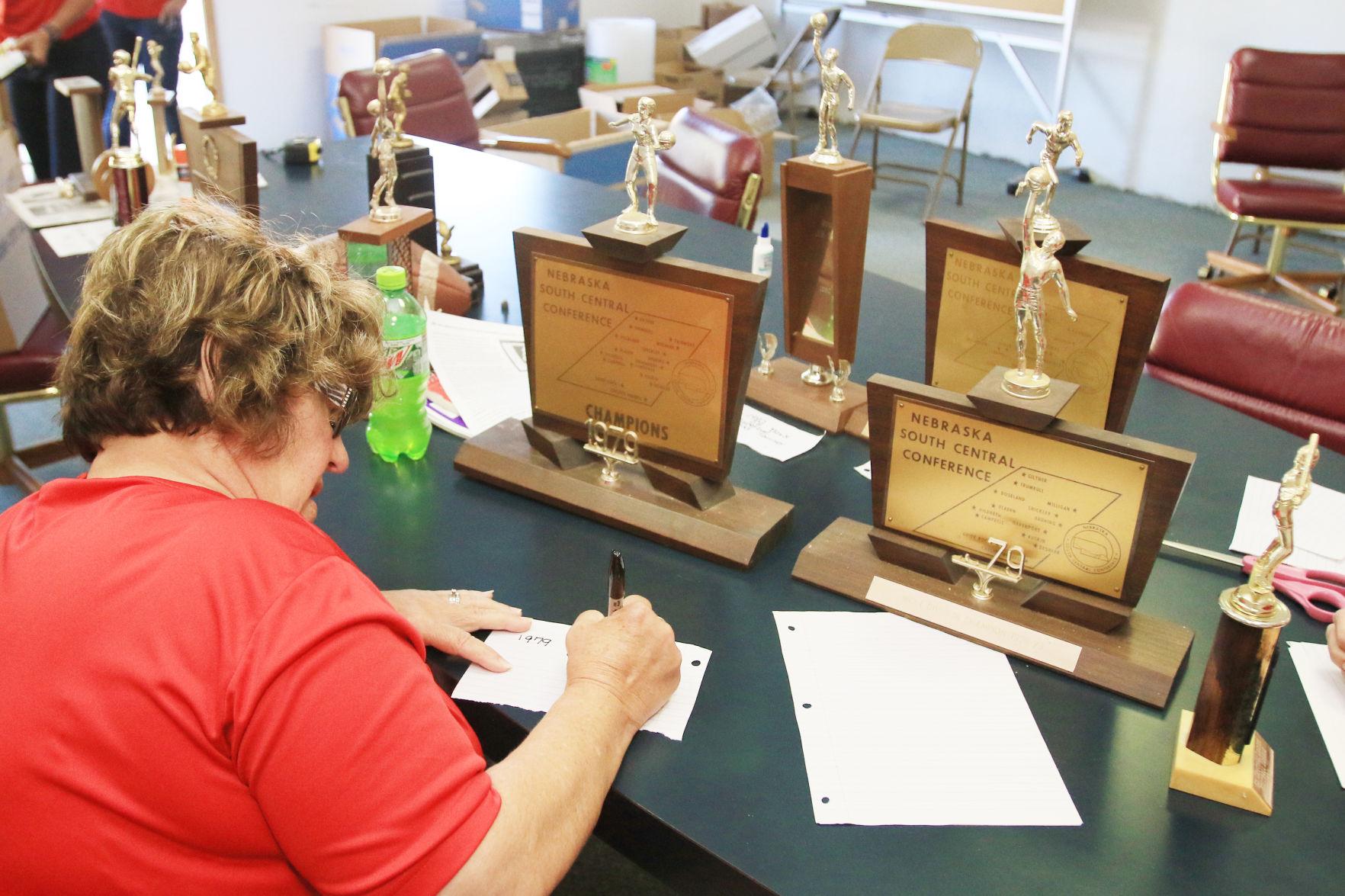 Cleo Mousel Wednesday writes out the year and event for trophies that were displayed at Roseland Village Hall. The trophies then will be individually photographed and put into a virtual trophy case.

The group also is applying for the Community Development Assistance Act, which enables the Nebraska Department of Economic Development to distribute a 40% state tax credit to businesses or individuals who make contributions to the project.

She said they are taking pledges now and donors will be notified when the project is approved and the donations can be made.

“They want to make sure you have the donors before they accept you into the program,” she said

Donors can sign up on the Roseland Community Center Donor Pledge Form at bit.ly/roselandcommunitycenter. All contact information collected in the form will remain confidential.

After making an eligible contribution to an approved community betterment project, the business or individual can complete and submit proof of contribution to the Nebraska Department of Economic Development to allow the tax credit to be claimed on the tax return for the year when the contribution is made.

For more information on the CDAA program, visit the NDED informational website at https://opportunity.nebraska.gov/program/community-development-assistance-act.

As the rate of positive COVID-19 cases in the South Heartland District Health Department continues to decline, local officials are scaling back the frequency with which they hold video news conferences.

The city of Hastings announced the change Thursday morning.

The current positivity rate for the health department is around 2%.

“We took a look at it over the past couple days,” Stutte said in an interview Thursday morning. “The numbers, as far as the COVID-19 positive numbers, are not being driven up much, and there’s just not a lot of new news to give, so we thought it would just be a good time to scale those back and probably do it every other week. As we continue to move through the pandemic and the way this all continues to lay out, we just want to make sure we’re giving relevant news. We don’t want to be meeting just to meet.”

He expects to hold a videoconference again on June 19.

“We don’t want to overload them when there’s not a whole lot of new information coming out right now,” he said.

Besides the Friday videoconferences, about 40 local stakeholders representing around 30 organizations have met throughout the quarantine process to discuss the challenges they each face.

The frequency of those meetings has slowed from six days a week initially to now once a week.

Stutte is thankful for all of the collaboration he has seen among local organizations as they fight the spread of COVID-19.

“We’ve got a great group of partners here to help discuss these issues and make sure people are getting relevant information,” he said.

Of a total of 310 patients in Adams, Webster, Clay and Nuckolls counties who have been confirmed positive for the novel coronavirus disease since March 18, 283 already have been declared to be recovered.

Those statistics arise out of the latest reports from the South Heartland District Health Department concerning the disease, a viral infection known in shorthand as COVID-19.

One additional case of the infection has been confirmed by a laboratory since Tuesday, South Heartland reported Thursday evening in a news release and through the recently launched statistics dashboard posted to its website, southheartlandhealth.org.

The single new case involves a Webster County resident and brings to six the number of cases recorded in that county. Adams County has recorded 279 cases; Clay County, 24; and Nuckolls County, one.

South Heartland’s dashboard shows 21 district residents have been hospitalized for COVID-19 and 11 have died after battling the disease. All 11 fatalities have been Adams County residents.

Districtwide to date, 51.8% of COVID-19 patients have been female and 48.2% have been male. Hispanic/Latino individuals have accounted for 46.6% of the total case tally, while 53.6% have been non-Hispanic/Latino.

According to the Nebraska Department of Health and Human Services, the statewide total number of positive cases to date increased Thursday to 16,315, with 212 fatalities. Of that number, 9,229 patients had recovered.

Statewide, 42% of hospital beds and 45% of intensive care unit beds were available Thursday — along with 75% of ventilators, which often are needed for the most seriously ill COVID-19 patients.

As of June 5, Mary Lanning Healthcare in Hastings, the largest of three hospitals in the South Heartland district, had only one COVID-19 patient admitted.

In a news release Thursday evening, Michele Bever, South Heartland health department executive director, said that while the four-county district has had encouraging news to report on the virus in recent days, that could change, depending in part on the choices area residents make in the days and weeks ahead.

“New cases are frequently traced back to gatherings or interactions where people are not keeping physical distance or wearing masks,” Bever said. “This is happening in social settings and at worksites. Everyone has a right to a safe work environment. We especially encourage worksites to do everything they can to provide a safe environment for their employees and their patrons.”

She recommends that employers take care to protect their workers from illness and their organizations from the disruption that would come from an outbreak of the illness.

“If someone tests positive at a worksite, everyone who is a close contact will need to be quarantined,” Bever said. “However, if your worksite has physical distancing measures in place and employees are wearing masks, the exposure to the positive case may be considered low risk, and the employees may not need to be quarantined. It is an advantage for the health and safety of your employees and for your staffing needs to do what you can to reduce the chances of your employees being exposed and needing to be quarantined. It reduces the impact on your business to have these things in place BEFORE you need them.” 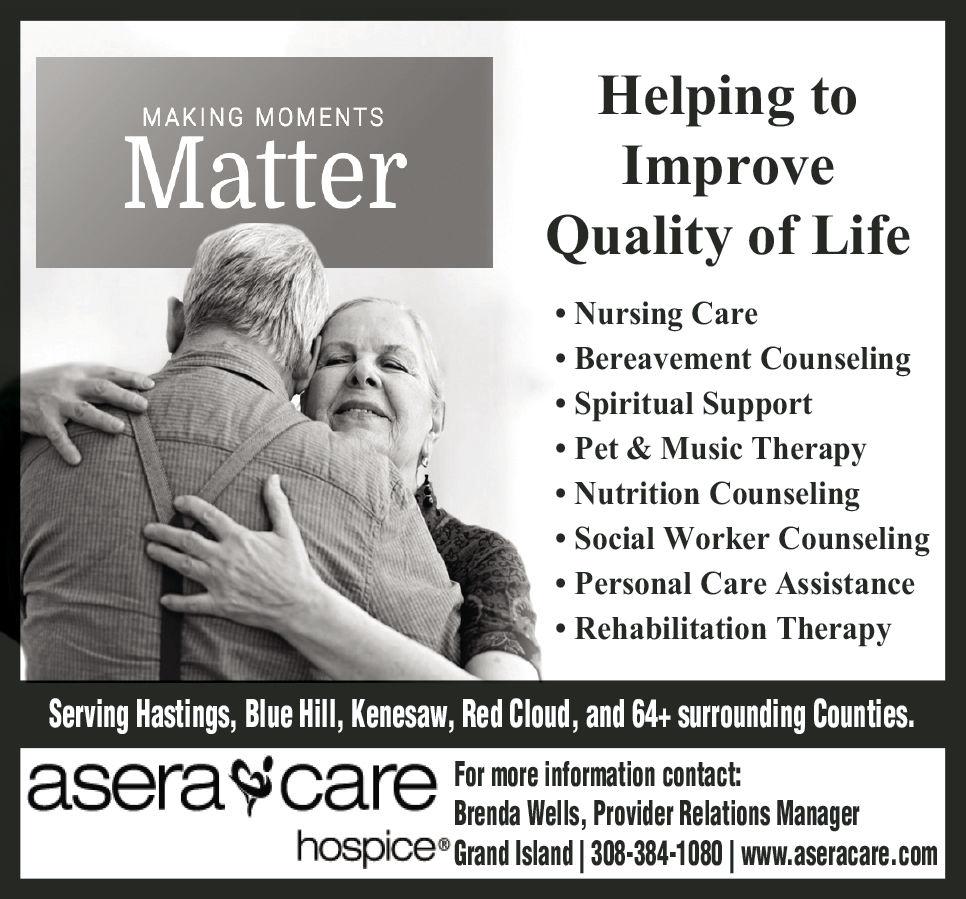 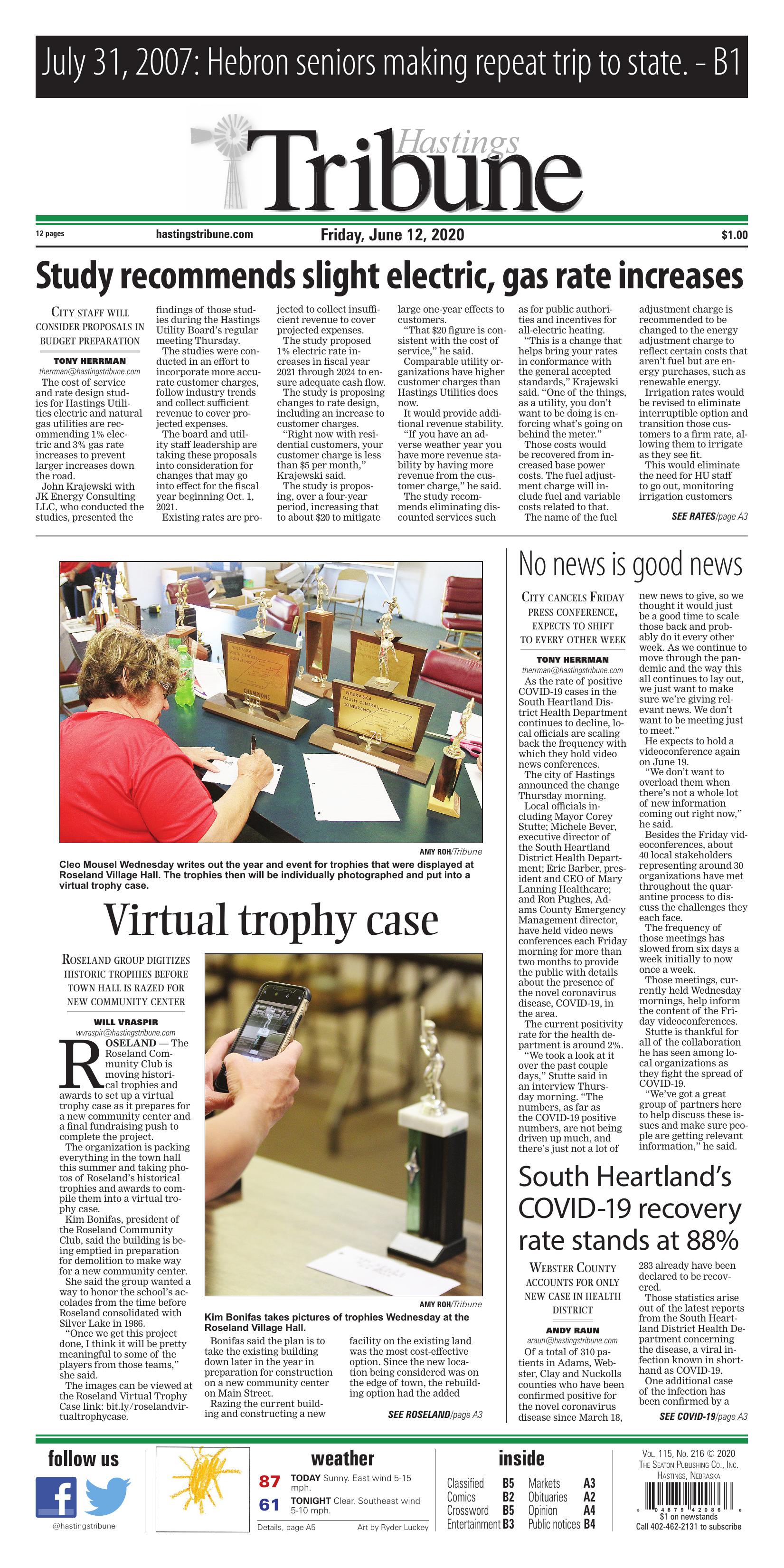