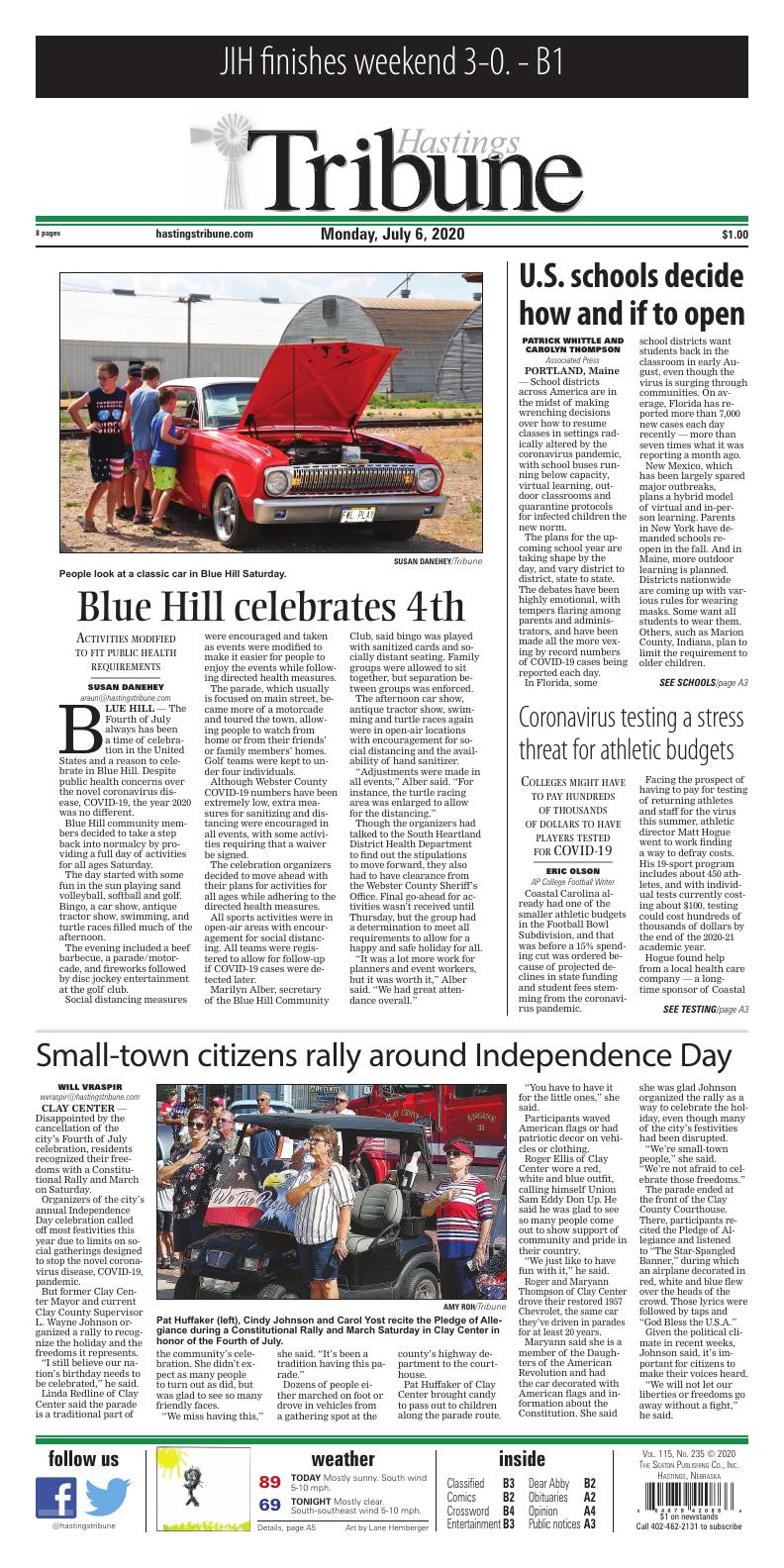 People look at a classic car in Blue Hill Saturday.

Madi Berggren, daughter of Chris and Amy Berggren of North Platte, poses with her turtle at the turtle races at the Blue Hill Fourth of July celebration Saturday.

BLUE HILL — The Fourth of July always has been a time of celebration in the United States and a reason to celebrate in Blue Hill. Despite public health concerns over the novel coronavirus disease, COVID-19, the year 2020 was no different.

Blue Hill community members decided to take a step back into normalcy by providing a full day of activities for all ages Saturday.

The day started with some fun in the sun playing sand volleyball, softball and golf. Bingo, a car show, antique tractor show, swimming, and turtle races filled much of the afternoon.

The evening included a beef barbecue, a parade/motorcade, and fireworks followed by disc jockey entertainment at the golf club.

Social distancing measures were encouraged and taken as events were modified to make it easier for people to enjoy the events while following directed health measures.

The parade, which usually is focused on main street, became more of a motorcade and toured the town, allowing people to watch from home or from their friends’ or family members’ homes. Golf teams were kept to under four individuals.

Although Webster County COVID-19 numbers have been extremely low, extra measures for sanitizing and distancing were encouraged in all events, with some activities requiring that a waiver be signed.

The celebration organizers decided to move ahead with their plans for activities for all ages while adhering to the directed health measures.

All sports activities were in open-air areas with encouragement for social distancing. All teams were registered to allow for follow-up if COVID-19 cases were detected later.

Marilyn Alber, secretary of the Blue Hill Community Club, said bingo was played with sanitized cards and socially distant seating. Family groups were allowed to sit together, but separation between groups was enforced.

The afternoon car show, antique tractor show, swimming and turtle races again were in open-air locations with encouragement for social distancing and the availability of hand sanitizer.

“Adjustments were made in all events,” Alber said. “For instance, the turtle racing area was enlarged to allow for the distancing.”

Though the organizers had talked to the South Heartland District Health Department to find out the stipulations to move forward, they also had to have clearance from the Webster County Sheriff’s Office. Final go-ahead for activities wasn’t received until Thursday, but the group had a determination to meet all requirements to allow for a happy and safe holiday for all.

“It was a lot more work for planners and event workers, but it was worth it,” Alber said. “We had great attendance overall.”

People gather at the Clay County Courthouse during a Constitutional Rally and March Saturday in Clay Center in honor of the Fourth of July.

CLAY CENTER — Disappointed by the cancellation of the city’s Fourth of July celebration, residents recognized their freedoms with a Constitutional Rally and March on Saturday.

Organizers of the city’s annual Independence Day celebration called off most festivities this year due to limits on social gatherings designed to stop the novel coronavirus disease, COVID-19, pandemic.

But former Clay Center Mayor and current Clay County Supervisor L. Wayne Johnson organized a rally to recognize the holiday and the freedoms it represents.

“I still believe our nation’s birthday needs to be celebrated,” he said. 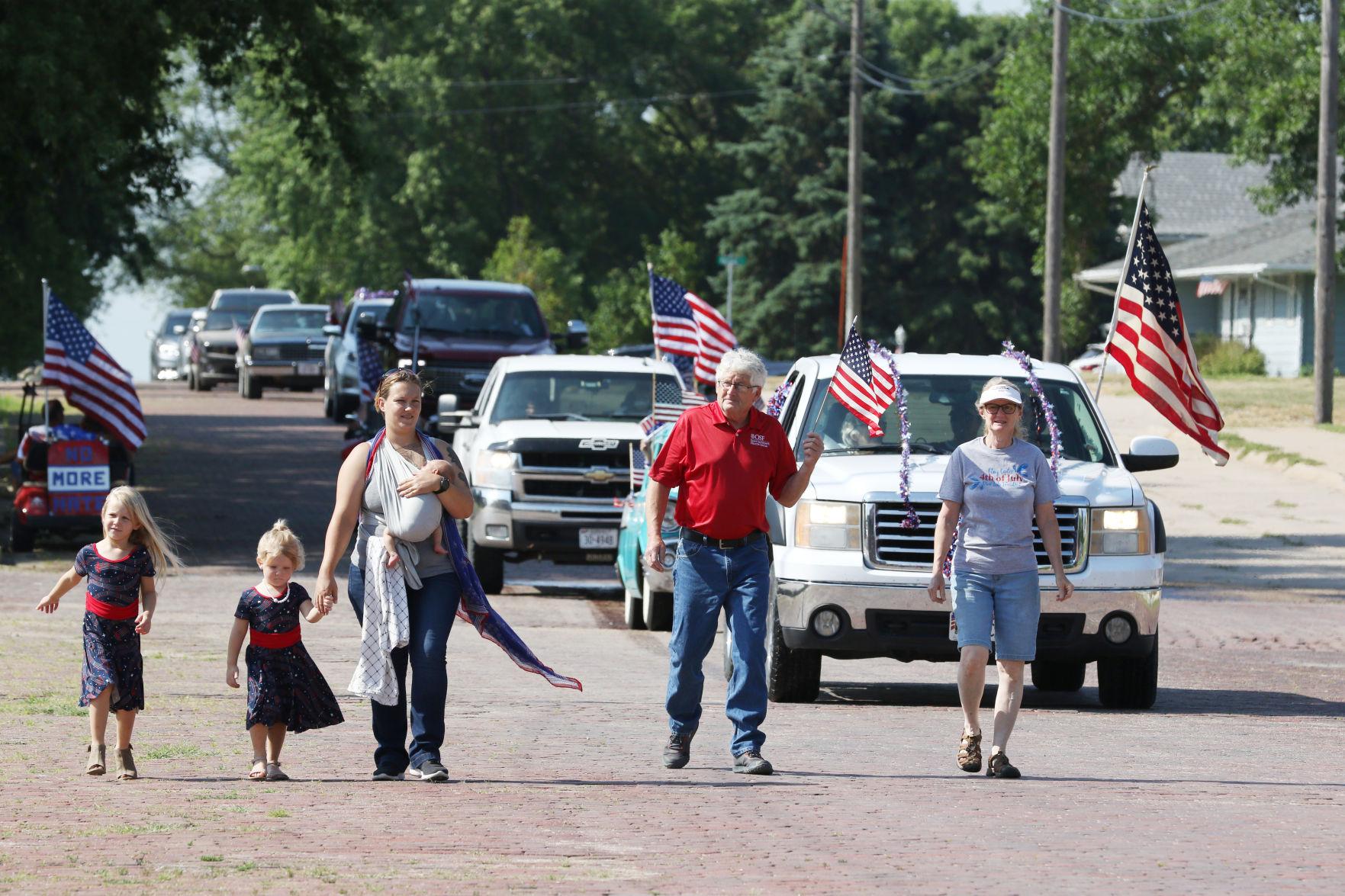 People parade in front of the Clay County Courthouse during a Constitutional Rally and March Saturday in Clay Center in honor of the Fourth of July. From left is Keela Turk, 6, Alannah Turk, 3, Jessica Turk, holding Shey, 1 month, Joe Cooney and Chris Cooney.

Linda Redline of Clay Center said the parade is a traditional part of the community’s celebration. She didn’t expect as many people to turn out as did, but was glad to see so many friendly faces.

“We miss having this,” she said. “It’s been a tradition having this parade.”

Dozens of people either marched on foot or drove in vehicles from a gathering spot at the county’s highway department to the courthouse. 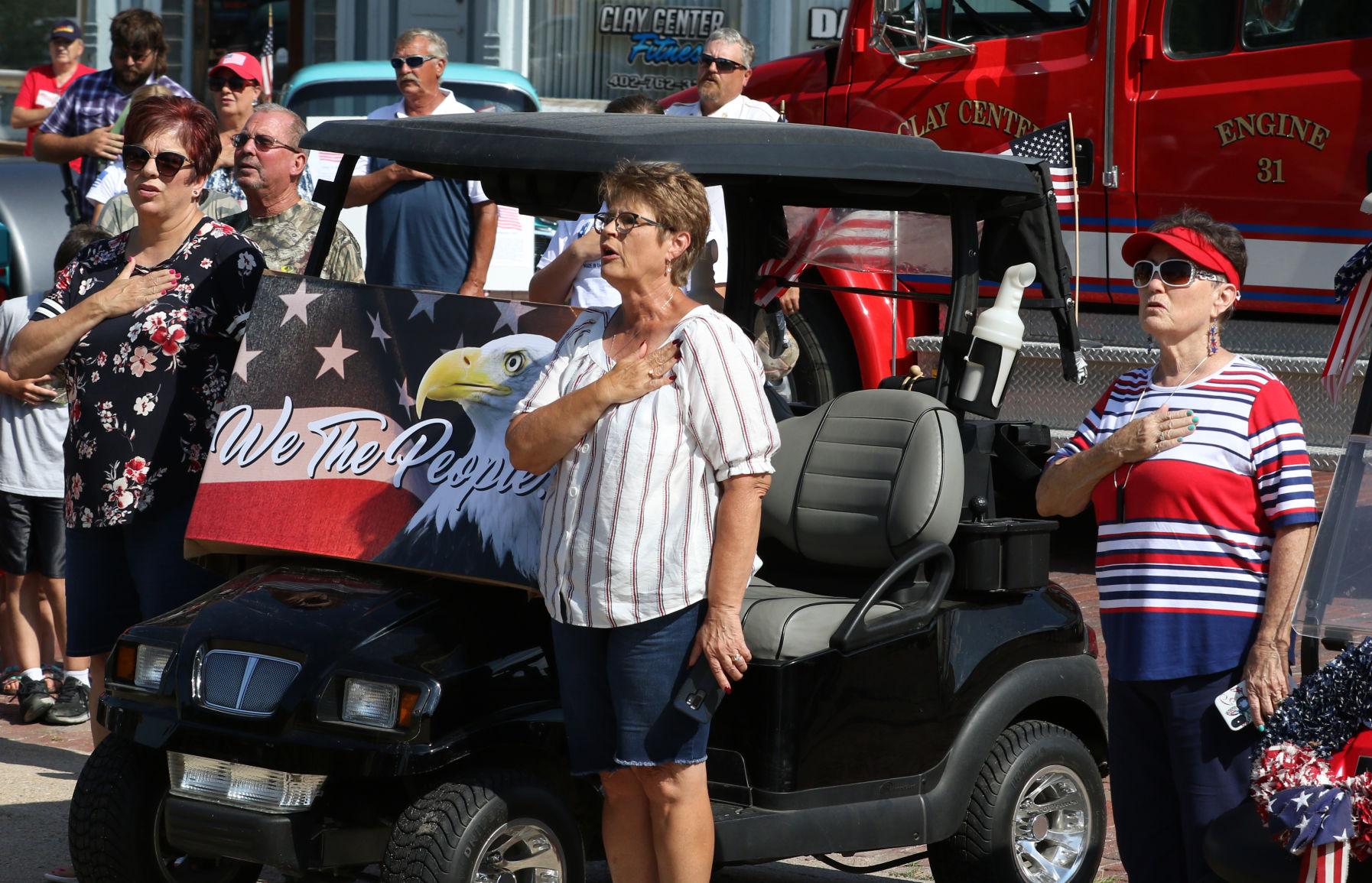 Pat Huffaker (left), Cindy Johnson and Carol Yost recite the Pledge of Allegiance during a Constitutional Rally and March Saturday in Clay Center in honor of the Fourth of July.

Pat Huffaker of Clay Center brought candy to pass out to children along the parade route.

“You have to have it for the little ones,” she said.

Participants waved American flags or had patriotic decor on vehicles or clothing.

Roger Ellis of Clay Center wore a red, white and blue outfit, calling himself Union Sam Eddy Don Up. He said he was glad to see so many people come out to show support of community and pride in their country.

“We just like to have fun with it,” he said. 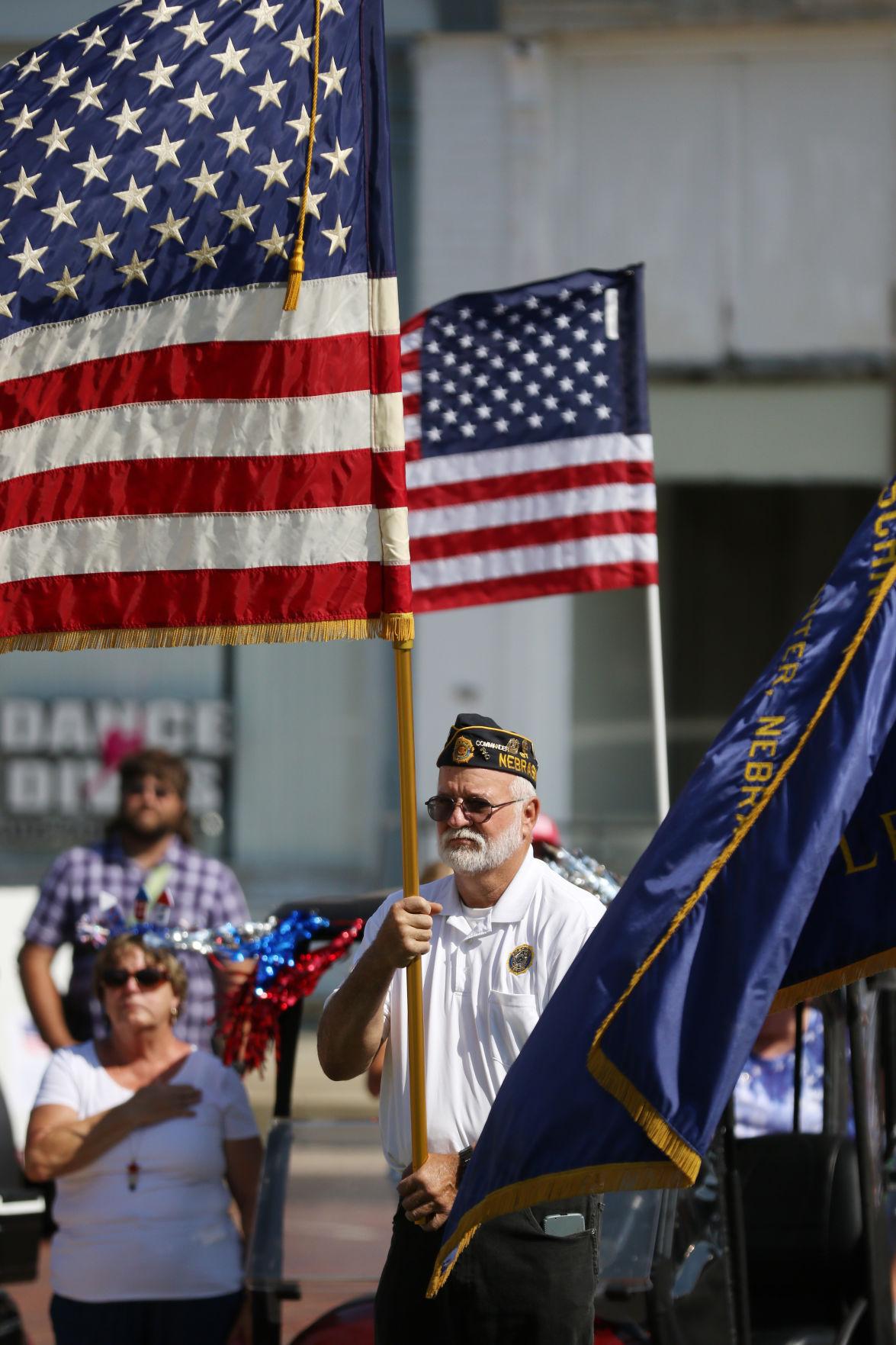 Mark Bailey holds the American flag as the national anthem is played during a Constitutional Rally and March Saturday in Clay Center in honor of the Fourth of July.

Roger and Maryann Thompson of Clay Center drove their restored 1957 Chevrolet, the same car they’ve driven in parades for at least 20 years.

Maryann said she is a member of the Daughters of the American Revolution and had the car decorated with American flags and information about the Constitution. She said she was glad Johnson organized the rally as a way to celebrate the holiday, even though many of the city’s festivities had been disrupted.

“We’re small-town people,” she said. “We’re not afraid to celebrate those freedoms.”

The parade ended at the front of the Clay County Courthouse. There, participants recited the Pledge of Allegiance and listened to “The Star-Spangled Banner,” during which an airplane decorated in red, white and blue flew over the heads of the crowd. Those lyrics were followed by taps and “God Bless the U.S.A.”

Given the political climate in recent weeks, Johnson said, it’s important for citizens to make their voices heard.

“We will not let our liberties or freedoms go away without a fight,” he said. 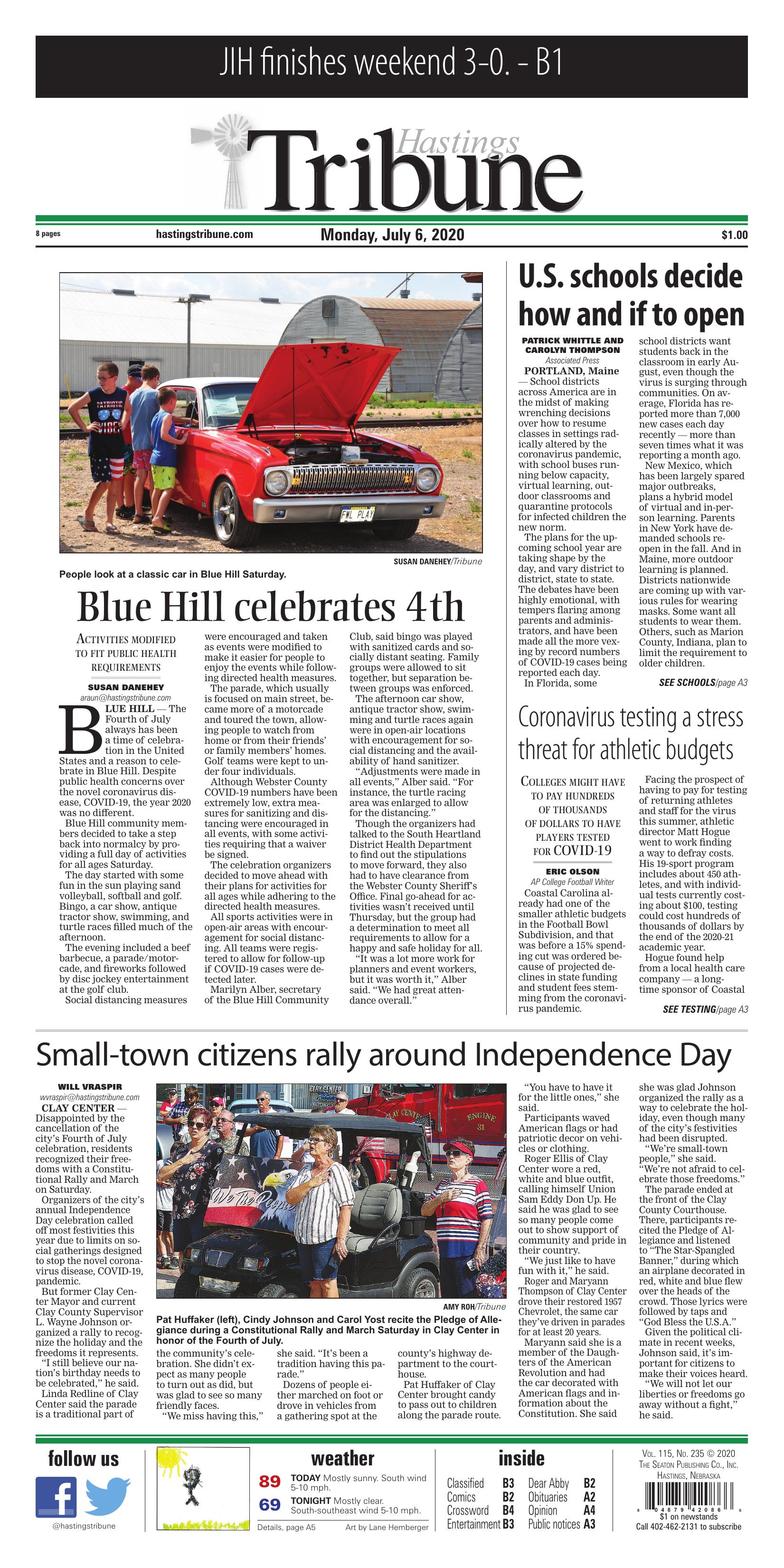