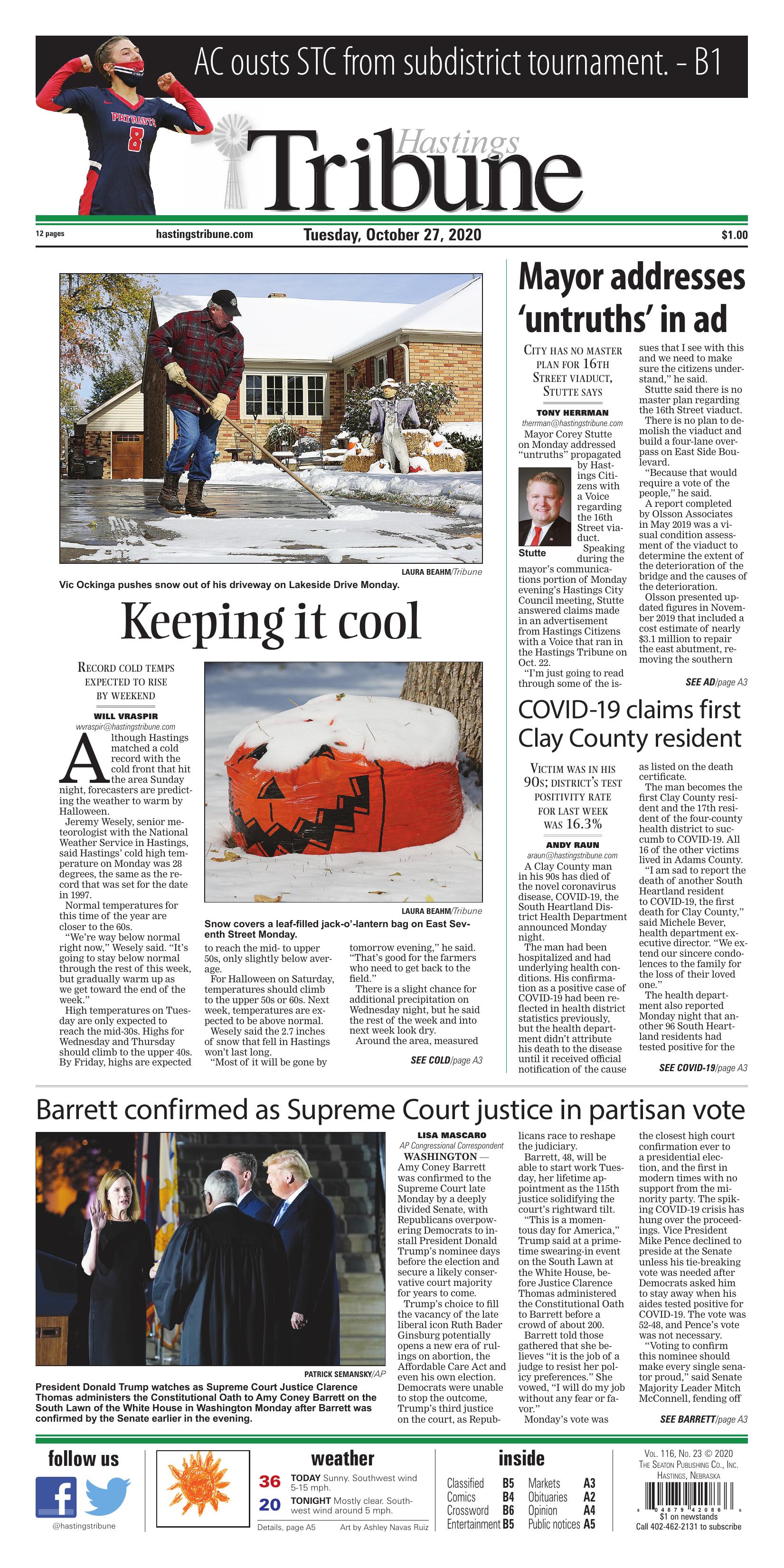 Vic Ockinga pushes snow out of his driveway on Lakeside Drive Monday.

Although Hastings matched a cold record with the cold front that hit the area Sunday night, forecasters are predicting the weather to warm by Halloween.

Jeremy Wesely, senior meteorologist with the National Weather Service in Hastings, said Hastings’ cold high temperature on Monday was 28 degrees, the same as the record that was set for the date in 1997.

Normal temperatures for this time of the year are closer to the 60s.

“We’re way below normal right now,” Wesely said. “It’s going to stay below normal through the rest of this week, but gradually warm up as we get toward the end of the week.” 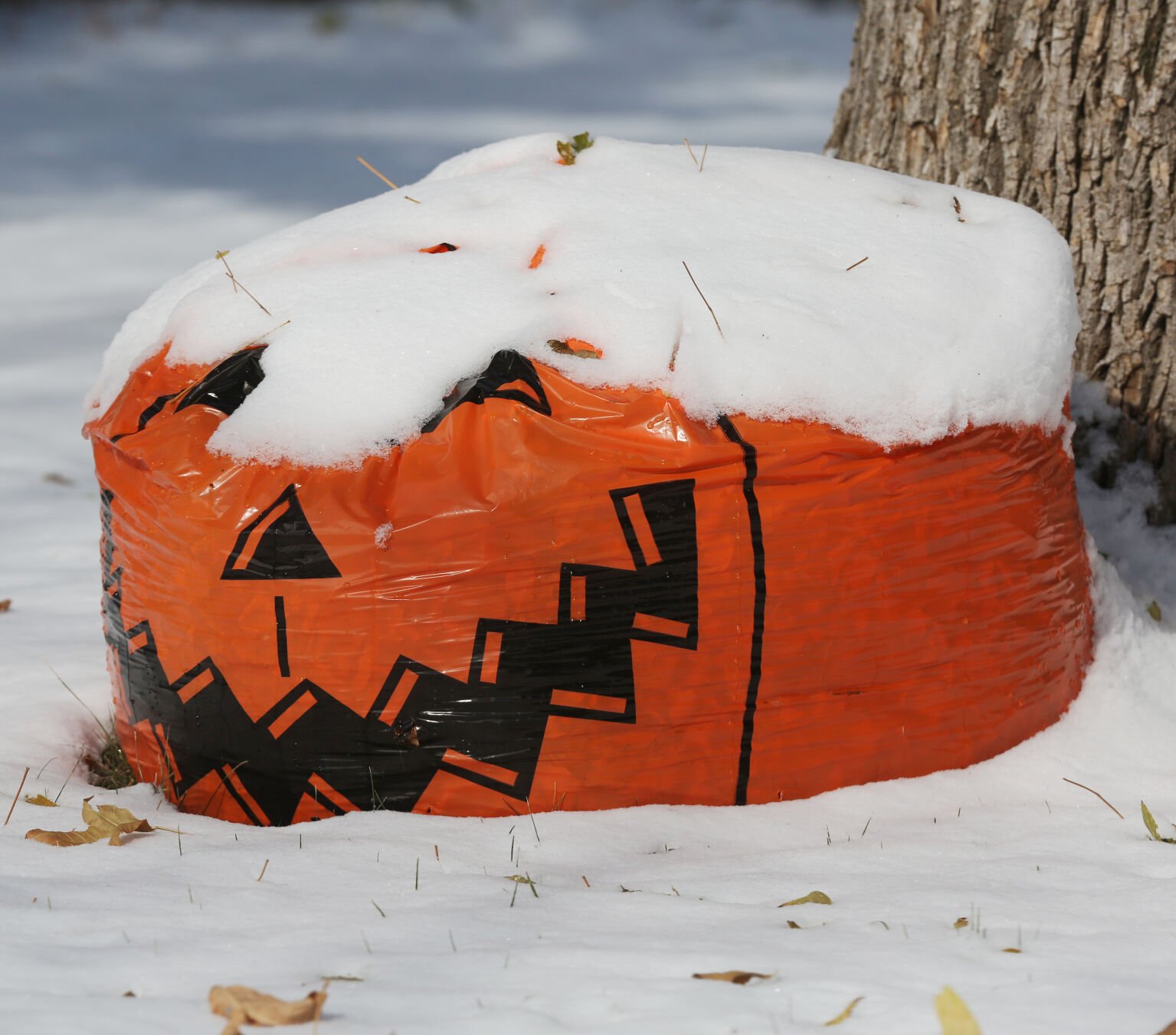 For Halloween on Saturday, temperatures should climb to the upper 50s or 60s. Next week, temperatures are expected to be above normal.

Wesely said the 2.7 inches of snow that fell in Hastings won’t last long.

“Most of it will be gone by tomorrow evening,” he said. “That’s good for the farmers who need to get back to the field.”

There is a slight chance for additional precipitation on Wednesday night, but he said the rest of the week and into next week look dry. 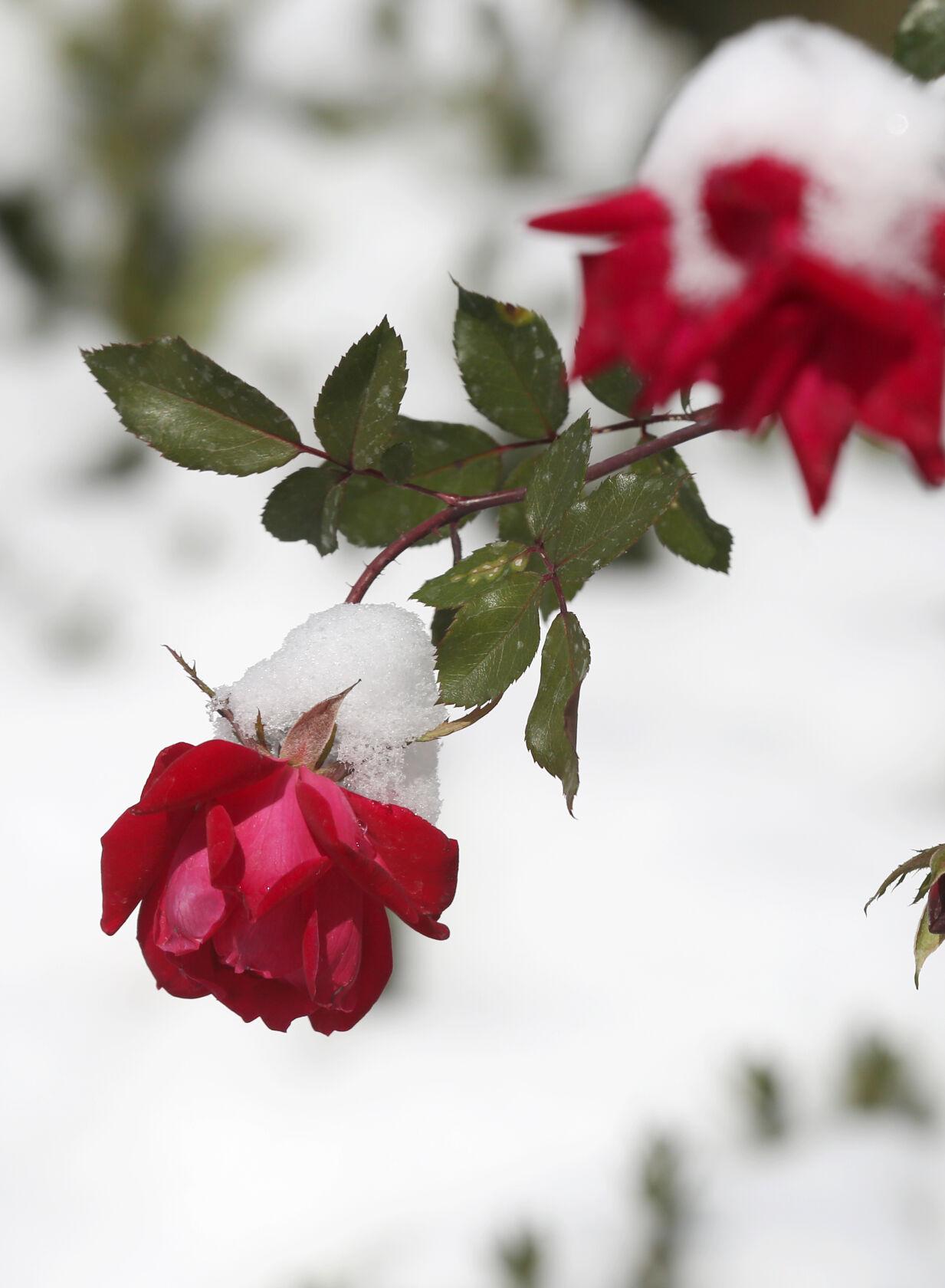 Snow weighs down roses on a bush at Alexander Park Monday.

As most of Nebraska experienced its first snowfall of the season, troopers with the Nebraska State Patrol responded to more than 170 snow-related incidents on Nebraska roads from Sunday through the Monday morning commute, according to an NSP news release. This included 45 property damage or personal injury crashes, assisting 125 motorists with disabled vehicles or other travel issues, and assisting outside agencies in several situations.

“The last couple days have provided a reminder of how quickly driving conditions can change with freezing rain or snow,” said Col. John Bolduc, superintendent of the Nebraska State Patrol. “As the weather improves this week, we encourage all drivers to remember this snow event and keep their winter driving skills ready for the upcoming season.”

Any motorist in need of assistance on Nebraska roads can call *55 to reach the NSP Highway Helpline. Drivers also are encouraged to download the Nebraska 511 smartphone app or bookmark www.511.nebraska.gov and always check road conditions before beginning to travel in winter weather. 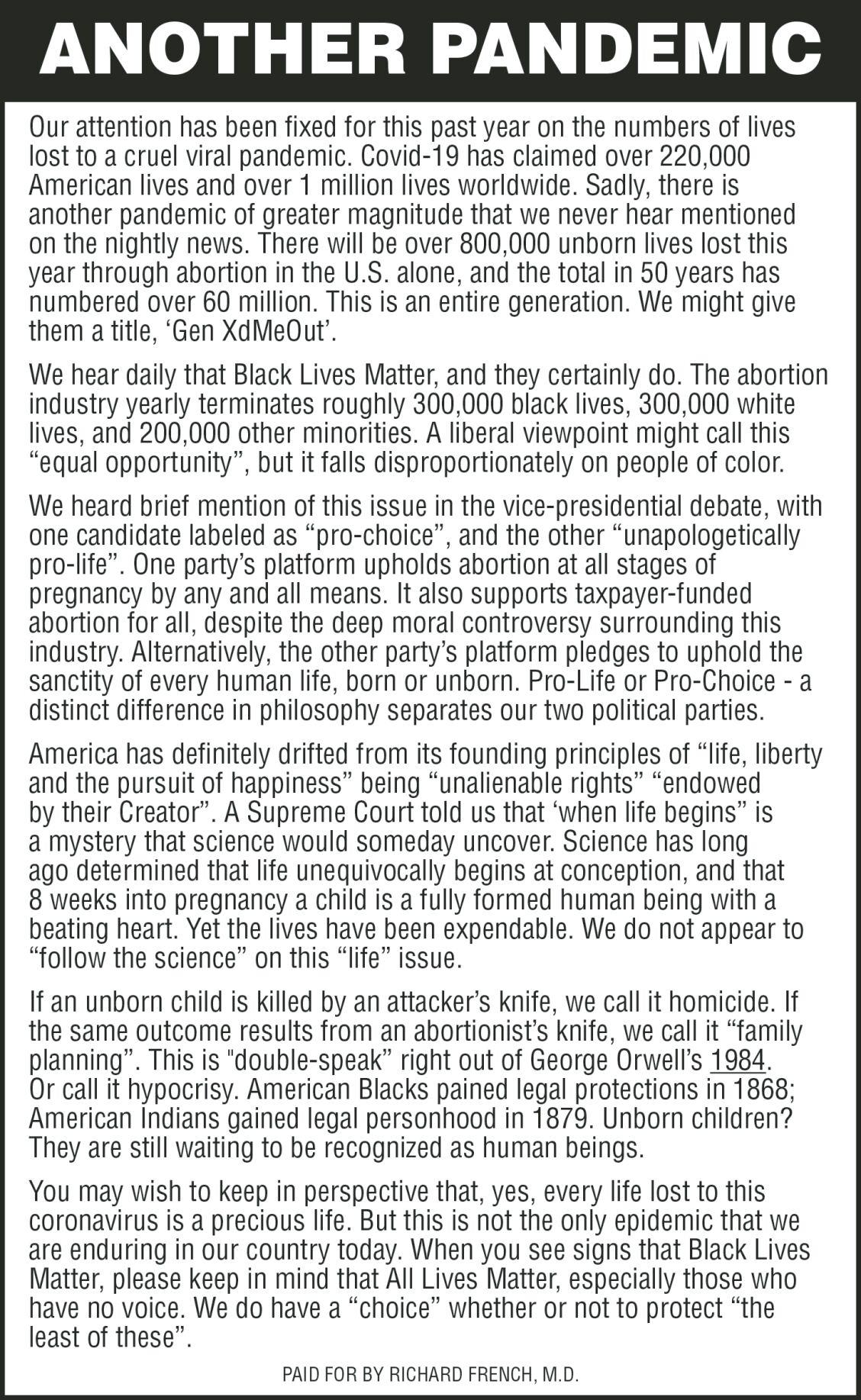 Mayor Corey Stutte on Monday addressed “untruths” propagated by Hastings Citizens with a Voice regarding the 16th Street viaduct.

Speaking during the mayor’s communications portion of Monday evening’s Hastings City Council meeting, Stutte answered claims made in an advertisement from Hastings Citizens with a Voice that ran in the Hastings Tribune on Oct. 22.

“I’m just going to read through some of the issues that I see with this and we need to make sure the citizens understand,” he said.

Stutte said there is no master plan regarding the 16th Street viaduct.

There is no plan to demolish the viaduct and build a four-lane overpass on East Side Boulevard.

“Because that would require a vote of the people,” he said.

“The proponents suggested a second opinion be sought, so we hired ESI,” Stutte said.

The report from Engineering Specialists Inc. of Omaha consisted of 260 pages of information and justifications that a repair wasn’t feasible.

The repair would actually end up being a rebuild of the viaduct.

“The most important aspect of this whole ongoing issue is that Jay Bleier, the senior engineer for Olsson and Associates, appeared at the Aug. 24 meeting and said their assessment was no longer valid,” Stutte said. “I just want people to understand that that first assessment is no longer valid and we need to be smart and listen to ESI. If people can understand that I hope they make the right choice moving forward.”

The Aug. 24 meeting was when the council approved a resolution placing a question on the general election ballot giving voters the opportunity to authorize the rebuilding of the 16th Street viaduct, issuing bonds in an amount not to exceed $12.5 million.

Bleier said on Aug. 24, factoring in other costs such as working with the Union Pacific Railroad, permitting, engineering costs, construction and testing, quality control and quality assurance, it is reasonable to assume that cost would go up to at least $10 million.

City Administrator Dave Ptak stressed at the Aug. 24 meeting the “not to exceed” language in the ballot issue.

Also during mayor’s communications, Stutte said getting to sign a proclamation declaring Oct. 29, 2020, to be Helen Bosley Day, in honor of the Hastings woman who is turning 108 that day, was “one of the coolest things” he’s ever done.

Council members voted 8-0 during Monday’s meeting to approve Ordinance No. 4648 to amend city code addressing the removal of dead and diseased trees and to provide for the assessment of removal costs. Council members also unanimously approved suspending the requirement to vote on an ordinance three times for its passage.

The ordinance addresses only trees on private property and not on terraces, which is city-owned property.

“Under the city code, as it exists today, there’s the ability for the city to remove a tree on private property after giving notice, so on and so forth,” City Attorney Clint Schukei said. “This merely adds to it that if that becomes necessary there’s a mechanism to assess those costs back against the property in an effort for the city to recover those costs.”

Unanimously approved bringing all of Westbrook Village 17th Addition within the corporate limits of the city of Hastings.

The man had been hospitalized and had underlying health conditions. His confirmation as a positive case of COVID-19 had been reflected in health district statistics previously, but the health department didn’t attribute his death to the disease until it received official notification of the cause as listed on the death certificate.

The man becomes the first Clay County resident and the 17th resident of the four-county health district to succumb to COVID-19. All 16 of the other victims lived in Adams County.

“I am sad to report the death of another South Heartland resident to COVID-19, the first death for Clay County,” said Michele Bever, health department executive director. “We extend our sincere condolences to the family for the loss of their loved one.”

The health department also reported Monday night that another 96 South Heartland residents had tested positive for the presence of the novel coronavirus in their bodies since Friday.

Infection with the virus can cause anything from no symptoms at all to serious and sometimes fatal illness.

The additional cases for Friday through Monday were reported by the district health department on Monday night. They bring to 1,375 the four-county health district’s running tally of positive cases of COVID-19 reported since March 18.

The new cases include 60 in Adams County, 18 in Clay County, and nine each in Nuckolls and Webster counties. The county-by-county case tally since March totals 925 in Adams, 192 in Clay, 131 in Nuckolls and 127 in Webster.

As of Monday, a total of 61 South Heartland residents had spent time in a hospital for treatment of COVID-19.

More than 725 of the district’s 1,375 cases to date have been classified as recovered. The recovery number last was updated on Oct. 16.

For the week of Oct. 18-24, the South Heartland health department received 1,068 laboratory reports for tests conducted during that period. Those results showed a total of 174 new positive cases — placing the district’s test positivity rate for the week at 16.3%.

The districtwide test positivity rate for the week of Oct. 11-17 was 17.1%. Any rate exceeding 15% indicates extensive spread of the virus in the community.

In Monday’s news release, Bever said the health department’s goal is to see the rates drop below 5%.

She asked all district residents to help thwart the further spread of the virus.

“Avoid the three Cs,” Bever said. “Avoid crowded places, avoid close contact and avoid confined spaces. Protect others and yourselves in everything you do.”

The Nebraska Department of Health and Human Services now is assisting the South Heartland staff’s contact tracing team in notifying individuals of their test results, advising them on next steps to take and answering questions.

“Sometimes people are hesitant to answer calls from unknown numbers, but we want residents to know that NeDHHS is helping us with contact tracing, so local individuals may be getting calls from numbers they don’t recognize,” Bever said. “If you have been tested for COVID, please answer these calls to determine whether it is someone reaching out with your test results. If someone from South Heartland or NeDHHS should call and leave a message, please return the call as directed in the message.”

Bever said contact tracers never will ask for information such as Social Security, banking or credit card numbers and residents should verify callers before giving out this kind of information over the telephone.