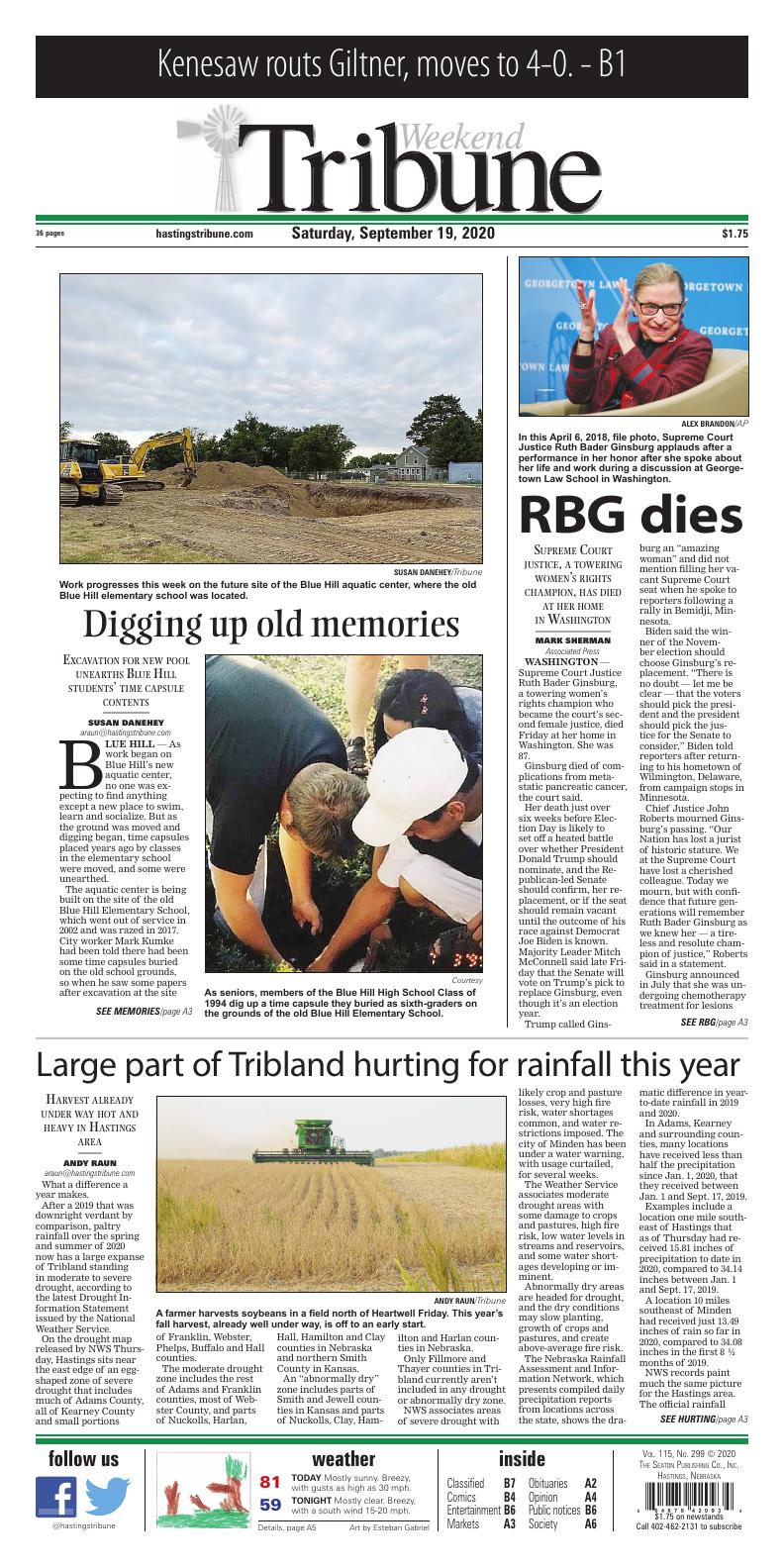 Work progresses this week on the future site of the Blue Hill aquatic center, where the old Blue Hill elementary school was located.

BLUE HILL — As work began on Blue Hill’s new aquatic center, no one was expecting to find anything except a new place to swim, learn and socialize. But as the ground was moved and digging began, time capsules placed years ago by classes in the elementary school were moved, and some were unearthed.

The aquatic center is being built on the site of the old Blue Hill Elementary School, which went out of service in 2002 and was razed in 2017. City worker Mark Kumke had been told there had been some time capsules buried on the old school grounds, so when he saw some papers after excavation at the site began, he couldn’t help but wonder if his discovery could be part of one of the capsules.

He started to read through the papers and knew right away that they were indeed a part of the time capsule project as names from the past came jumping out at him. 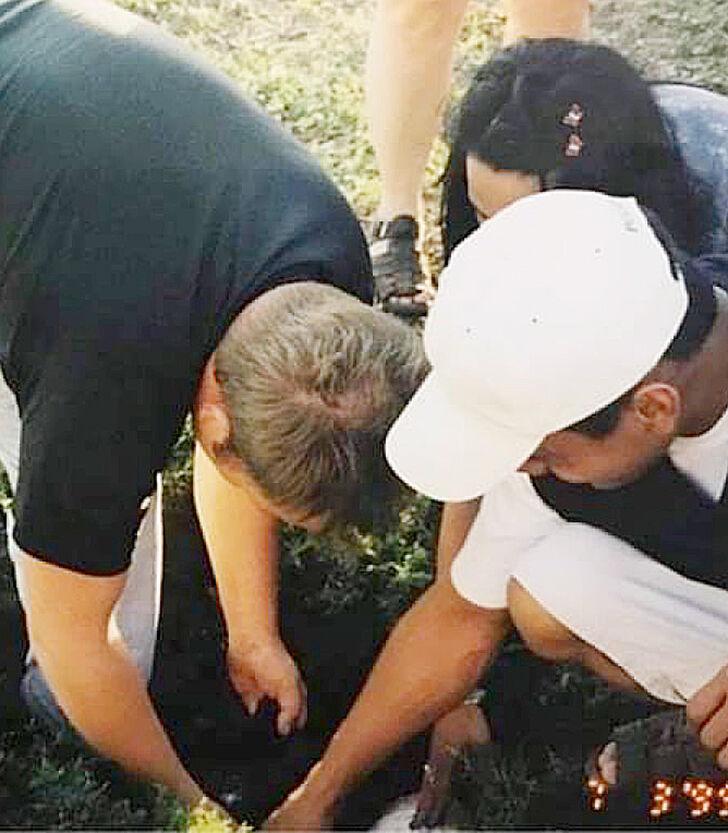 As seniors, members of the Blue Hill High School Class of 1994 dig up a time capsule they buried as sixth-graders on the grounds of the old Blue Hill Elementary School.

Kumke dropped the papers off to various local residents to whom they belonged and gave some to Mayor Keri Schunk to deliver to the remaining students.

The nine papers found were all part of the Class of 2000 time capsule buried while the students were in elementary school and no longer were encased in the capsule.

“They were just laying there by a pile of dirt,” Kumke said. 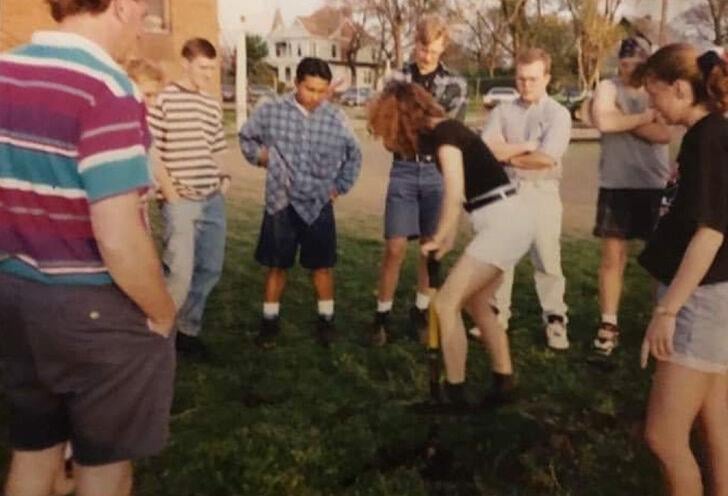 As seniors, members of the Blue Hill High School Class of 1994 dig up a time capsule they buried as sixth-graders on the grounds of the old elementary school.

One of the letters talked about some photos in the capsule, but no photos were found, so it is apparent that there are some missing parts to what was once in the capsule.

Former Blue Hill teacher Brad Ballou started the project during his tenure at the school as an extension of something he did when he was in school in Wilsonville with one of his teachers. Ballou’s grade school class buried a time capsule which still hasn’t been dug up in Wilsonville. 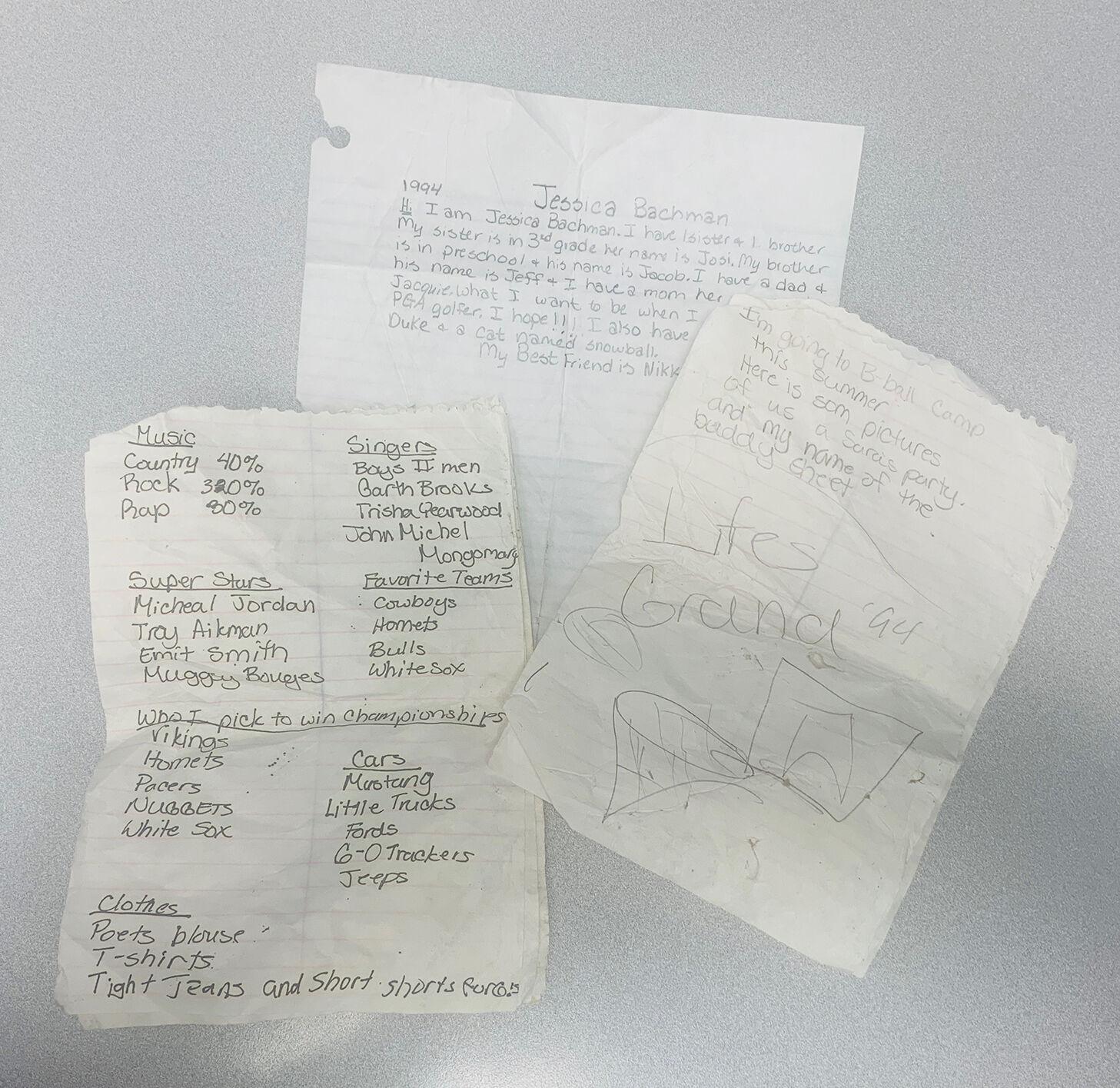 These are some of the papers found on the construction site for the new Blue Hill aquatic center, located where the elementary school once stood. They are from a time capsule buried by the Blue Hill High School Class of 2000 when the students were sixth-graders.

“We are supposed to dig ours up in 50 years, and I look forward to doing that,” he said. Ballou thinks it will be interesting to look back at a younger version of himself and 10 other classmates.

Ballou did a similar project with his sixth-grade students in Blue Hill for 12 years. The classes involved were the ones in his room between 1983 and 1995. He encouraged them to write what they wanted to but to consider things like what they wanted to be, likes, dislikes, thoughts or anything they thought to be relevant.

The papers were not read or judged — just put into a jar obtained from the cooks in the school kitchen by the students.

Each class selected a recordkeeper of sorts who would be responsible for keeping the instructions to retrieve the time capsule at an agreed time. Classes would record how many steps it would be in which direction from the corner of the school.

“Nothing is for sure, but we thought the building would be there forever,” Ballou said. “Of course, the pool is a great project for Blue Hill and a great step forward for Blue Hill.”

When Ballou heard that construction had begun on the aquatic center project he thought there might be some discoveries. Some classes already had dug up their time capsules for class reunions, and some were unable to find theirs.

Mayor Schunk was in the Class of 1992. Her class made great efforts to find its time capsule but was unsuccessful.

Class members went by the instructions: “One hundred Deanna Lienemann sixth grade steps from the southwest corner of the school under the boat,” said Schunk.

This group faced more hurdles than foot size changes. The boat on the playground had been burned in a vandalism incident and no longer was in place, leaving only the memories of where the boat used to be to help find the buried treasure.

“We even had Lonnie VanBoening come up with his new metal detector, but were unable to find it,” Schunk said. 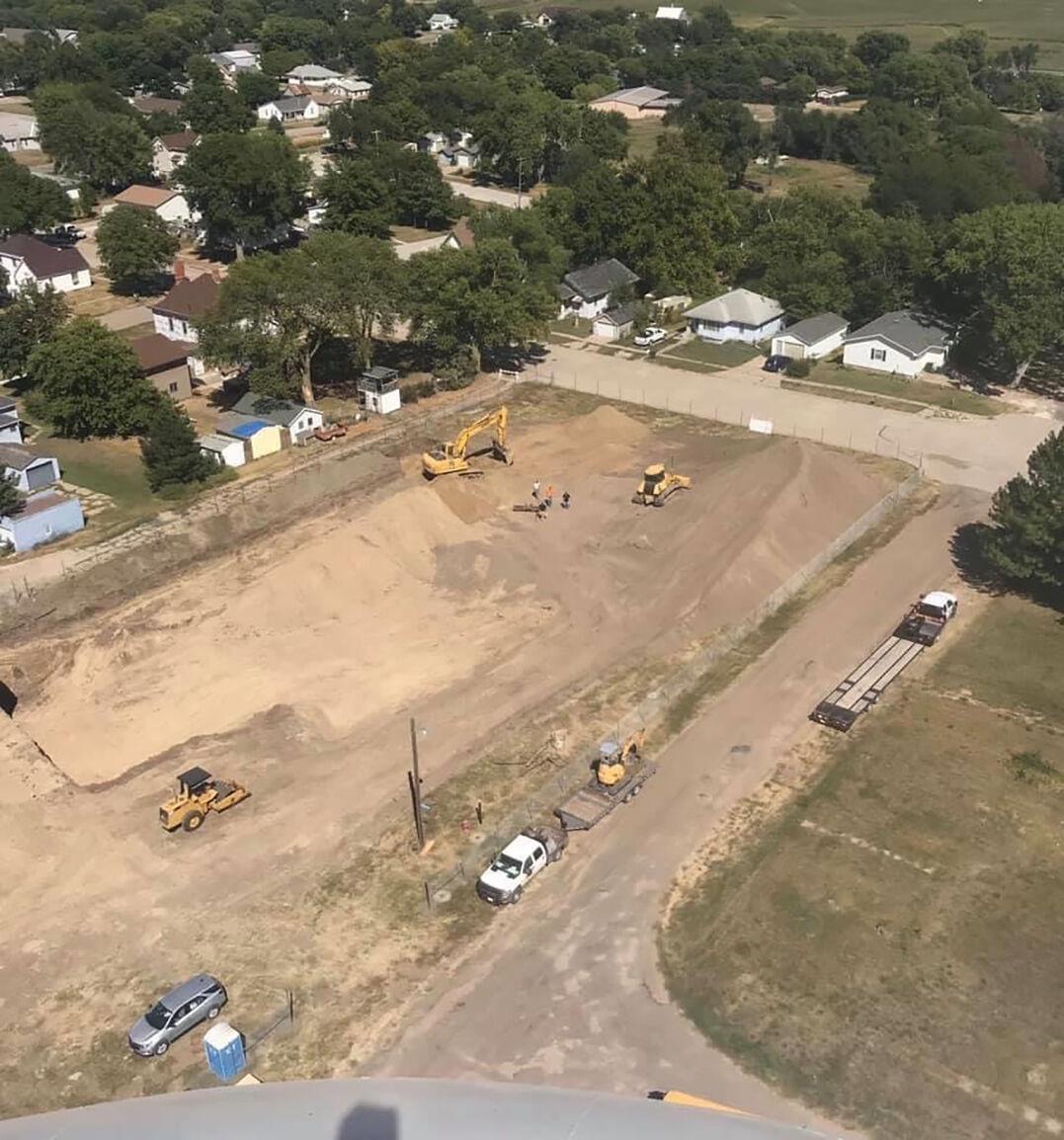 Work progresses recently on the new Blue Hill aquatic center, to be located on the former site of the elementary school. This photo was taken from the town water tower.

On the other hand, the Class of 1994 was successful in digging up time capsules on the school property not once, but twice.

“We dug up our sixth-grade capsule as seniors, and most of the pictures were ruined,” said Annette Spencer, a 1994 class member. “We buried another one in 1994 with letters to ourselves and our senior pictures and dug it up in 1999; it was all still intact.”

As work on the pool project continues, Blue Hill alumni hope more time capsule contents will be found and that they are well preserved. 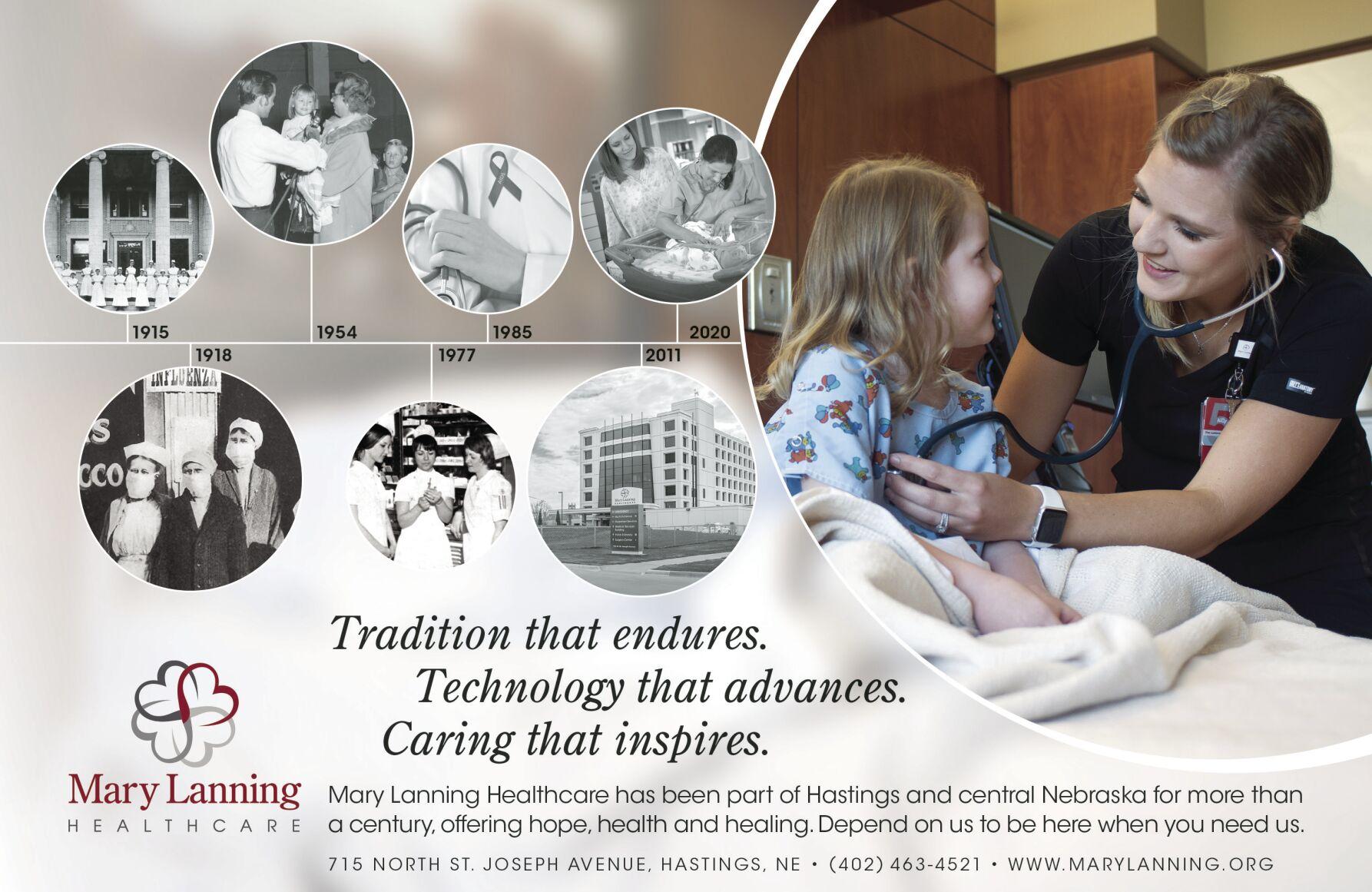 A farmer harvests soybeans in a field north of Heartwell Friday. This year’s fall harvest, already well under way, is off to an early start.

What a difference a year makes.

After a 2019 that was downright verdant by comparison, paltry rainfall over the spring and summer of 2020 now has a large expanse of Tribland standing in moderate to severe drought, according to the latest Drought Information Statement issued by the National Weather Service.

On the drought map released by NWS Thursday, Hastings sits near the east edge of an egg-shaped zone of severe drought that includes much of Adams County, all of Kearney County and small portions of Franklin, Webster, Phelps, Buffalo and Hall counties.

The moderate drought zone includes the rest of Adams and Franklin counties, most of Webster County, and parts of Nuckolls, Harlan, Hall, Hamilton and Clay counties in Nebraska and northern Smith County in Kansas.

An “abnormally dry” zone includes parts of Smith and Jewell counties in Kansas and parts of Nuckolls, Clay, Hamilton and Harlan counties in Nebraska.

Only Fillmore and Thayer counties in Tribland currently aren’t included in any drought or abnormally dry zone.

NWS associates areas of severe drought with likely crop and pasture losses, very high fire risk, water shortages common, and water restrictions imposed. The city of Minden has been under a water warning, with usage curtailed, for several weeks.

The Weather Service associates moderate drought areas with some damage to crops and pastures, high fire risk, low water levels in streams and reservoirs, and some water shortages developing or imminent.

Abnormally dry areas are headed for drought, and the dry conditions may slow planting, growth of crops and pastures, and create above-average fire risk.

The Nebraska Rainfall Assessment and Information Network, which presents compiled daily precipitation reports from locations across the state, shows the dramatic difference in year-to-date rainfall in 2019 and 2020.

In Adams, Kearney and surrounding counties, many locations have received less than half the precipitation since Jan. 1, 2020, that they received between Jan. 1 and Sept. 17, 2019.

Examples include a location one mile southeast of Hastings that as of Thursday had received 15.81 inches of precipitation to date in 2020, compared to 34.14 inches between Jan. 1 and Sept. 17, 2019.

NWS records paint much the same picture for the Hastings area. The official rainfall total for June 1 through Aug. 31 at the Hastings Municipal Airport was just 4.5 inches — 41% of the normal total, which is 10.84 inches.

The dry weather has speeded up the start of fall harvest, with many soybean fields already cut or now in the process. A combine was seen running in a soybean field near the Adams-Kearney county line over Labor Day weekend.

In the Hastings area, the fall harvest often doesn’t begin in earnest until the second half of September, and sometimes not until late in the month.

The U.S. Drought Monitor didn’t show much change to zone maps for this area from last week to this week.

Many locations in Tribland received a half-inch to 1.5 inches or more of welcome rainfall between Sept. 8 and 10.

While “certainly beneficial,” NWS said, those rains weren’t enough to improve drought status in most areas.

The weather outlook for the coming one to two weeks doesn’t suggest any relief. The forecast is for mostly dry and at least slightly warmer-than-normal conditions, the Weather Service reported.

While the area surrounding Hastings is in drought, many locations on the east side of Tribland, where rainfall tends to be somewhat more plentiful, have been better treated this summer.

In the NeRAIN records, six locations in Thayer County, including the Hebron, Deshler, Byron and Davenport areas, received more than 10 inches of rainfall in July alone. 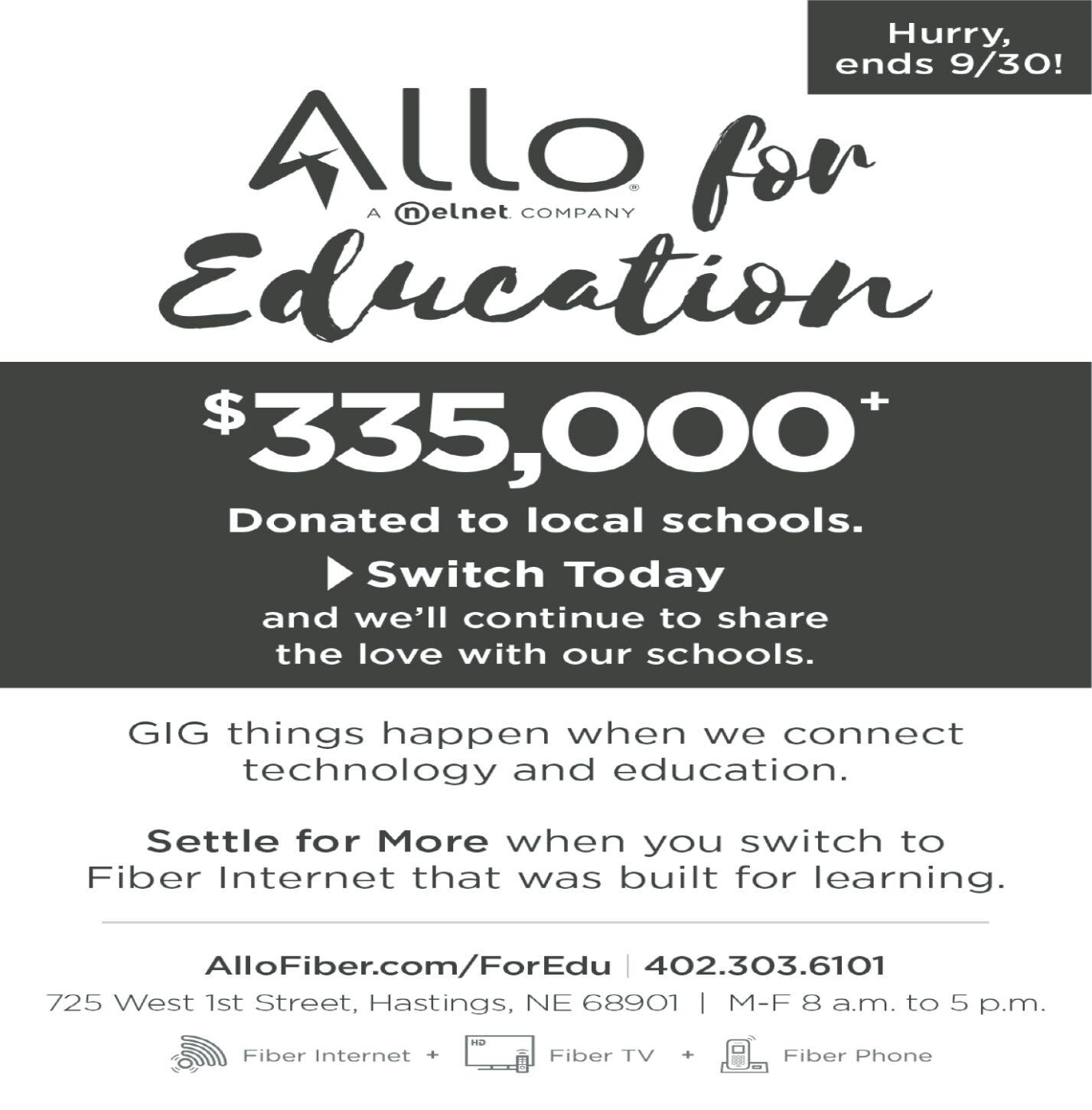 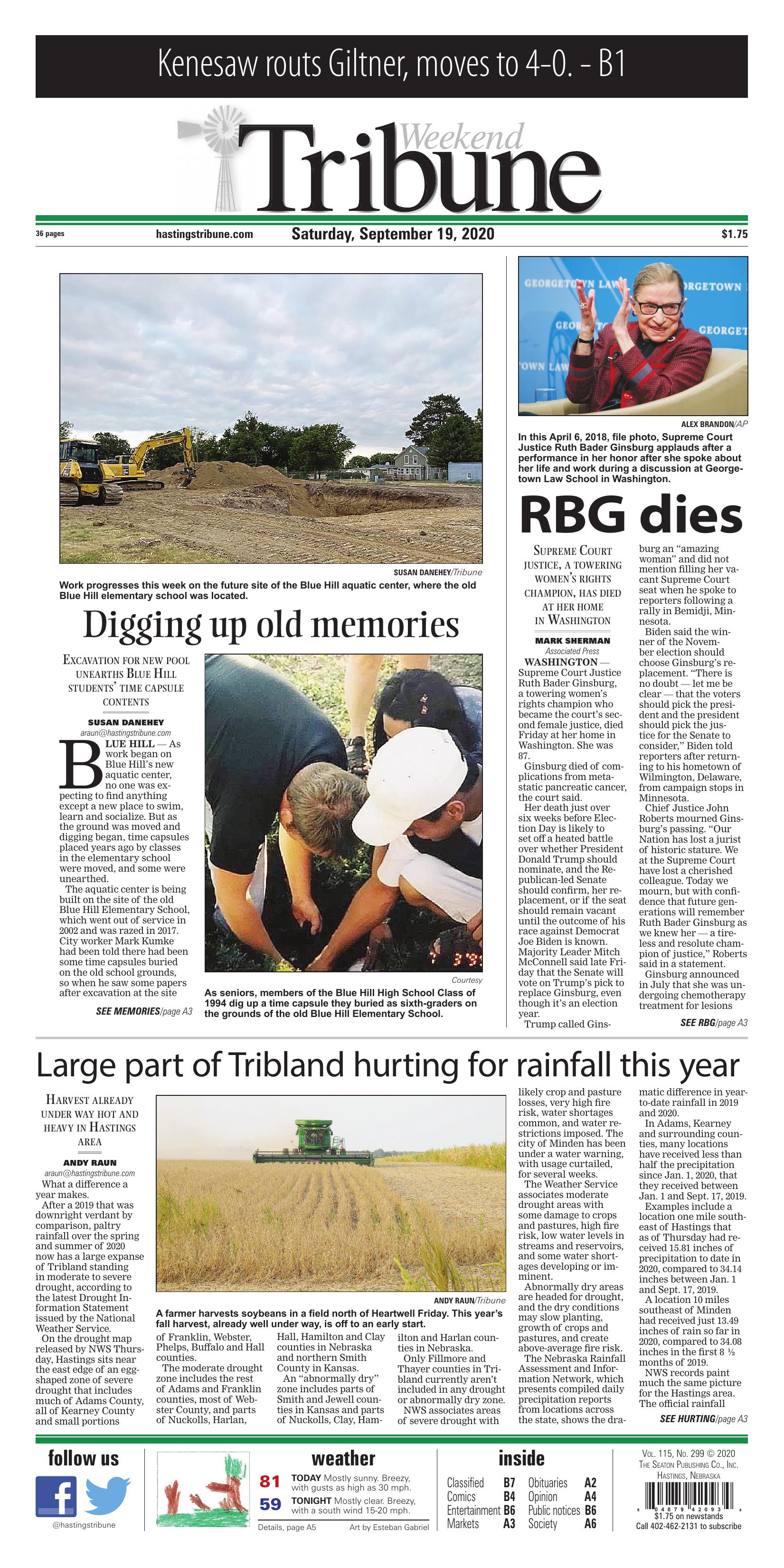