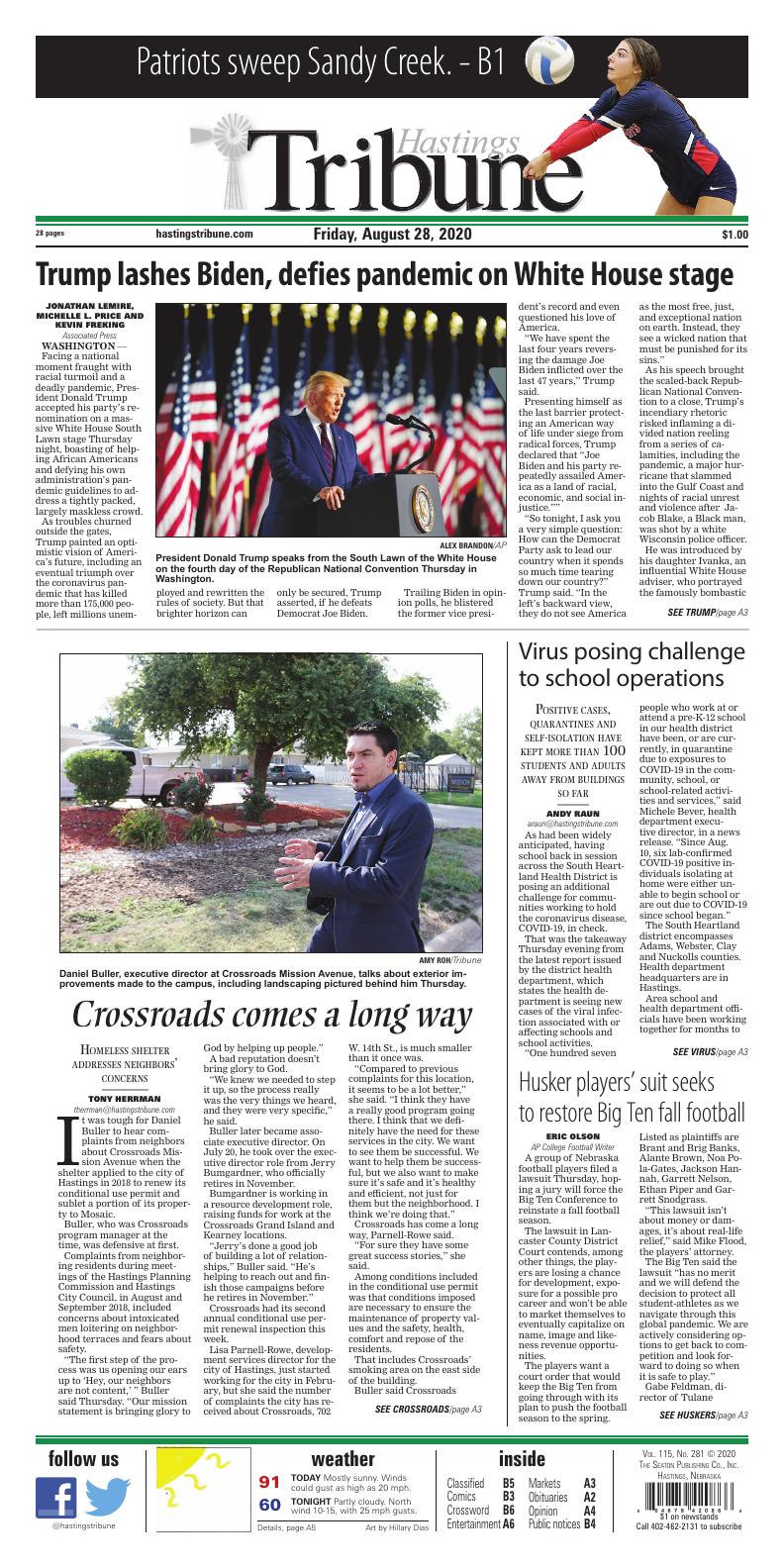 Daniel Buller, executive director at Crossroads Mission Avenue, talks about exterior improvements made to the campus, including landscaping pictured behind him Thursday.

Daniel Buller, executive director at Crossroads Mission Avenue, talks about exterior improvements made to the campus. The area pictured here was formerly the smoking area for Crossroads’ residents. The smoking area was moved to an area on campus not visible to neighbors.

It was tough for Daniel Buller to hear complaints from neighbors about Crossroads Mission Avenue when the shelter applied to the city of Hastings in 2018 to renew its conditional use permit and sublet a portion of its property to Mosaic.

Buller, who was Crossroads program manager at the time, was defensive at first.

Complaints from neighboring residents during meetings of the Hastings Planning Commission and Hastings City Council, in August and September 2018, included concerns about intoxicated men loitering on neighborhood terraces and fears about safety.

“The first step of the process was us opening our ears up to ‘Hey, our neighbors are not content,’ ” Buller said Thursday. “Our mission statement is bringing glory to God by helping up people.”

“We knew we needed to step it up, so the process really was the very things we heard, and they were very specific,” he said.

Bumgardner is working in a resource development role, raising funds for work at the Crossroads Grand Island and Kearney locations.

“Jerry’s done a good job of building a lot of relationships,” Buller said. “He’s helping to reach out and finish those campaigns before he retires in November.”

Crossroads had its second annual conditional use permit renewal inspection this week.

Lisa Parnell-Rowe, development services director for the city of Hastings, just started working for the city in February, but she said the number of complaints the city has received about Crossroads, 702 W. 14th St., is much smaller than it once was.

“Compared to previous complaints for this location, it seems to be a lot better,” she said. “I think they have a really good program going there. I think that we definitely have the need for these services in the city. We want to see them be successful. We want to help them be successful, but we also want to make sure it’s safe and it’s healthy and efficient, not just for them but the neighborhood. I think we’re doing that.”

“For sure they have some great success stories,” she said.

Among conditions included in the conditional use permit was that conditions imposed are necessary to ensure the maintenance of property values and the safety, health, comfort and repose of the residents.

That includes Crossroads’ smoking area on the east side of the building.

Buller said Crossroads moved that fenced-in smoking area within a week of the City Council meeting. It was replaced with a deck off the kitchen in the courtyard of the U-shaped facility.

“They have a nice area they can enjoy,” he said of Crossroads residents. “They need to be able to enjoy things, too. They shouldn’t be shut in. They are not in jail. But we wanted them to have a place to enjoy that wouldn’t bother the neighbors.”

A 6-foot vinyl fence was added on the north side of the property a year later at the recommendation of former city Development Services Director Don Threewitt.

Crossroads also improved the landscaping at the northwest corner of the property.

“Perception is a big deal,” Buller said. “So when people drive around the building, it’s freshly painted. It’s taken care of — the landscape on that corner. All of those things are a big deal. It speaks about what we do at the mission, that we want to do it with excellence. I still say even greater than that is internally what’s going on. There have been times related to all of those problems was turmoil within staffing and personnel at the mission. In the history of Crossroads there have been on the board level some issues, and then that all trickles down to program issues.”

The more than 25 Crossroads staff members working at programs in Hastings, Kearney and Grand Island share in a sense of unity, he said.

“We have put together the program and staff to hold people accountable and take them to the next level where they are not homeless anymore, but they are also great members of the community,” he said. “They are giving back to their community. They are learning to be good neighbors.”

As Crossroads addressed the conditions placed on it by the city, the shelter and critical neighbors have worked to repair that relationship.

Crossroads even received a letter of support from a neighbor who criticized the shelter in 2018.

Among improvements that must still be made at Crossroads is the elevator, which hasn’t been operational since a fire in the building there several years ago.

The elevator will need be repaired and most likely replaced. Buller spoke to an elevator company that estimated replacement would cost $110,000.

“The company that was looking at that said, ‘Hey, it’s beyond repair’; it’s a very old elevator,” he said. “We’re thinking we’re going to have to look at a full upgrade with that.”

Replacing the elevator will be the next fundraising goal for Crossroads.

Buller is encouraging potential donors to contact Crossroads at 402-462-6460.

Parnell-Rowe and Building Inspector Mark Evans are going to outline a timeframe for Crossroads to become compliant on the issue.

This comes after Crossroads spent more than $50,000 to fix the building’s geothermal heating, ventilation and air conditioning system.

“Really, the facility has come a long ways,” Buller said. “The elevator is a piece now to focus on.”

The changes are more than physical, he said.

“It wasn’t just building a fence,” he said. “It wasn’t just moving the smoking area. It was really taking a look at everything going on at Crossroads and making changes and making sure all across the board we are doing things that bring glory to God.”

As had been widely anticipated, having school back in session across the South Heartland Health District is posing an additional challenge for communities working to hold the coronavirus disease, COVID-19, in check.

That was the takeaway Thursday evening from the latest report issued by the district health department, which states the health department is seeing new cases of the viral infection associated with or affecting schools and school activities.

“One hundred seven people who work at or attend a pre-K-12 school in our health district have been, or are currently, in quarantine due to exposures to COVID-19 in the community, school, or school-related activities and services,” said Michele Bever, health department executive director, in a news release. “Since Aug. 10, six lab-confirmed COVID-19 positive individuals isolating at home were either unable to begin school or are out due to COVID-19 since school began.”

Area school and health department officials have been working together for months to lay plans aimed at getting — and keeping — school doors open this fall, even as the pandemic continues with no vaccine yet available.

The reopening plans include social distancing, use of face covers, and extra cleaning and sanitation in school facilities. School operations could be derailed by outbreaks of the viral infection among students and staff members — who could in turn pass the illness on to family members and others in and beyond their communities.

“The schools have plans in place to help reduce coronavirus spread,” Bever said. “We are working closely with them to keep this virus in check. We encourage parents and community members to know their school’s plans and to help out by practicing prevention at school, at home and in the community.”

Bever said residents can help decrease the overall risk for spread of COVID-19 in their communities by reducing opportunities for the virus to spread from person to person.

“This means keeping physically distanced from others, wearing cloth face coverings when we are around others, staying home when we have any symptoms, washing our hands, and disinfecting frequently touched surfaces,” she said. “The goal is to keep our positive cases low and to keep our students and teachers at school.”

South Heartland reported eight new laboratory-confirmed cases of the coronavirus disease among district residents for Tuesday, Wednesday and Thursday. The new cases include seven in Adams County and one in Clay County.

The new cases bring to 490 the running tally of COVID-19 confirmations among district residents since March 18. By county, the cases to date include 406 in Adams, 62 in Clay, 14 in Webster and eight in Nuckolls.

As of Thursday, 454 of the 490 cases districtwide were classified as recovered. Twenty-seven of the patients have spent time in a hospital in connection with a COVID-19 diagnosis, and 11 of the patients — all Adams County residents — have died.

Meanwhile, the Nebraska Department of Health and Human Services provides daily updates to the state’s COVID-19 cases on its Data Dashboard at http://dhhs.ne.gov/Pages/Coronavirus. 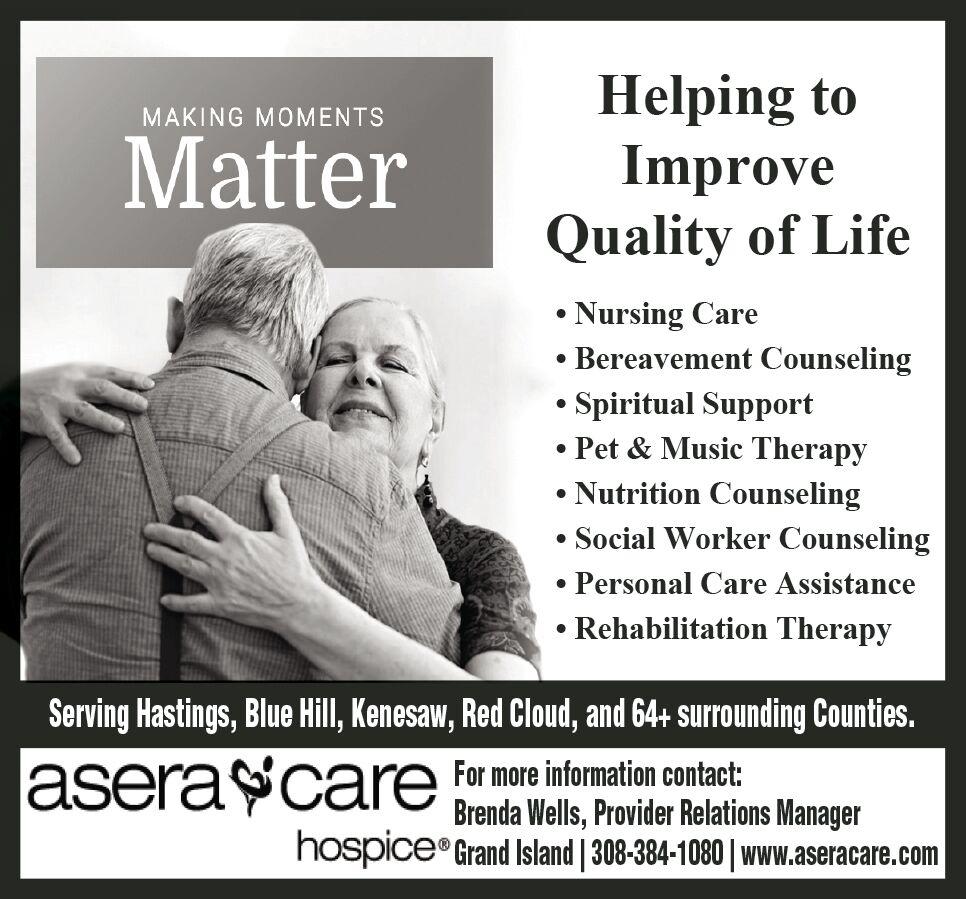 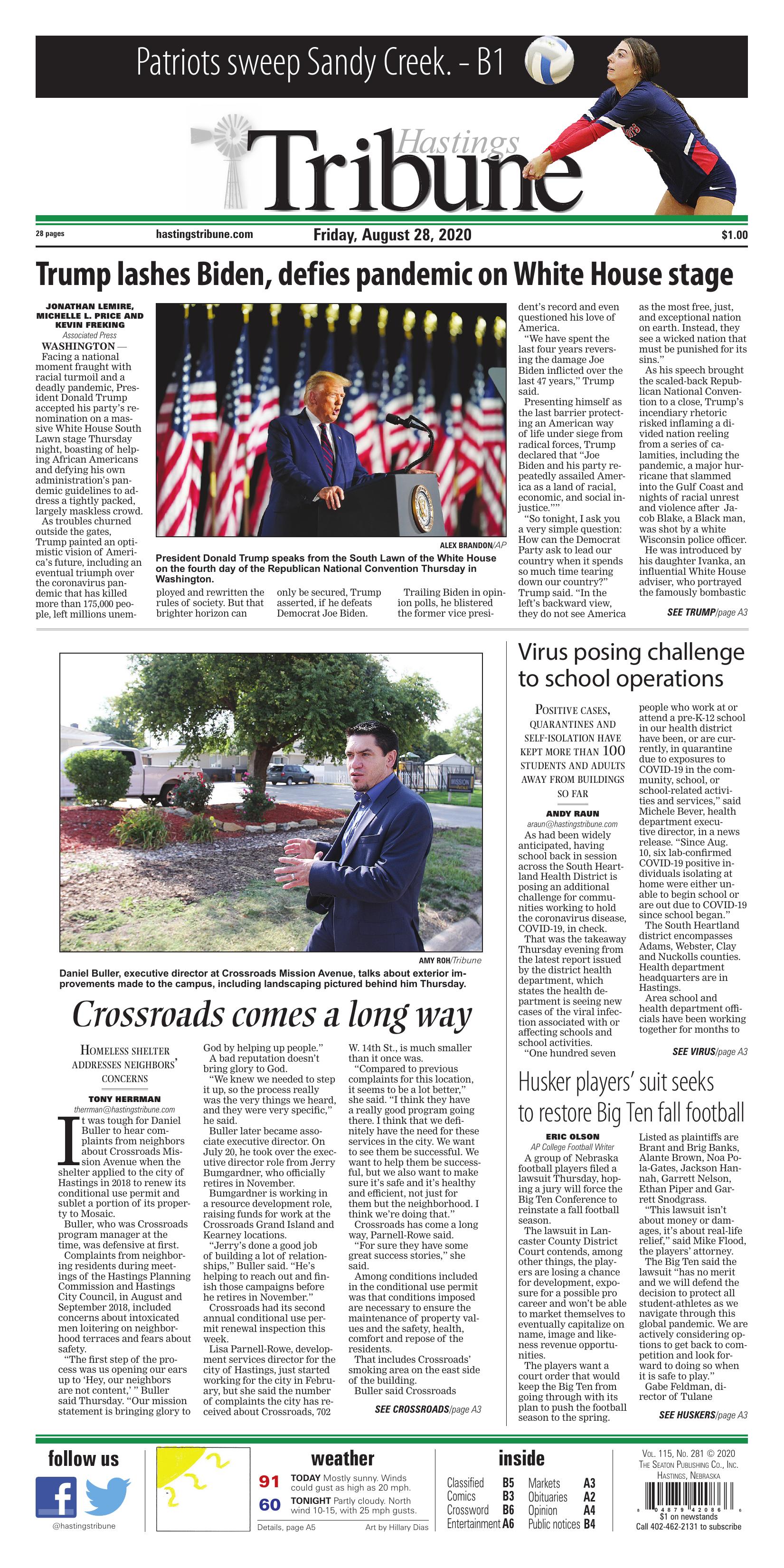