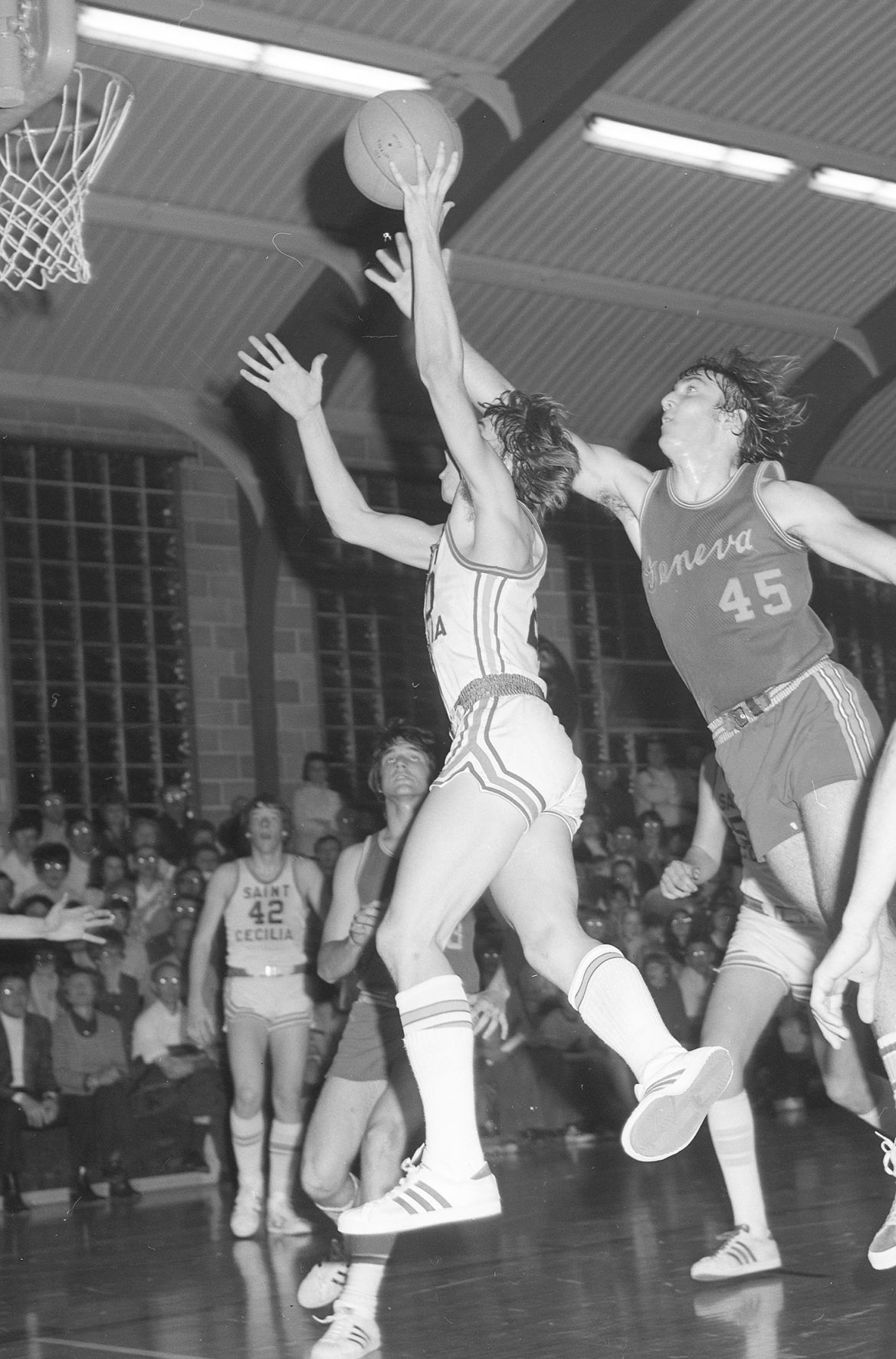 Craig Marble (20) of St. Cecilia drives in for a layup over Geneva’s Dan Ward (45) in the fourth period of their game January 31, 1975. Marble, fouled on the play by Ward, completed a three-point play and paced the Hawks in scoring with 33 points, including a brilliant 15-19 at the free throw line. 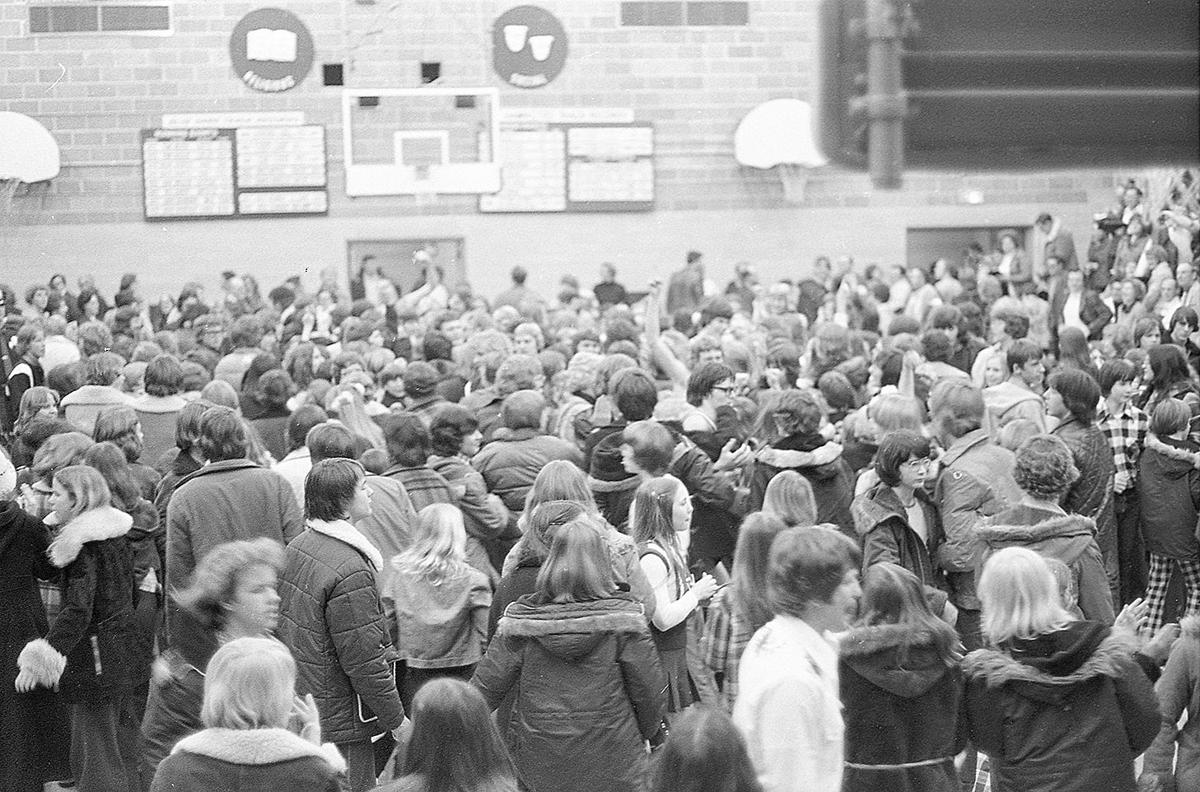 St. Cecilia fans mobbed the Blue Hawks after their thrilling 70-67 upset win over Geneva, the state’s number one ranked Class C team at the Gymtorium January 31, 1975. The win also gave the Hawks the Mid-Nebraska Conference championship and boosted their season record to 12-4. 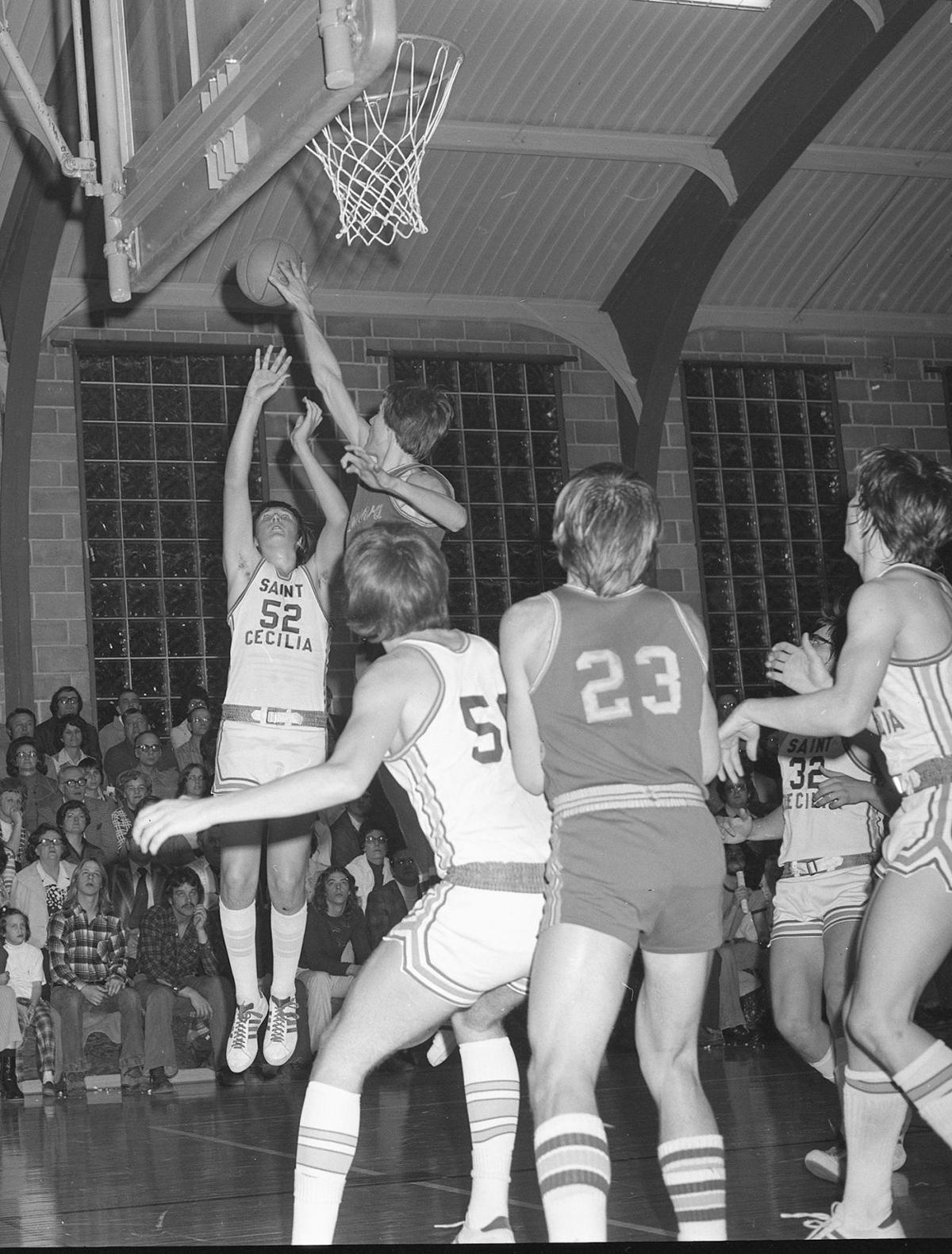 Geneva’s Ken Adkisson blocks this jump shot by Bernie Hajny of St. Cecilia (52) in the fourth period action of their game January 31, 1975. Hajny led his team in rebounding as the Blue Hawks upset Geneva 70-67. Watching the action are Jack O’Rourke (50) and Tom Wissing (32) of St. Cecilia as well as Rick Buerer (23) of Geneva.

“We don’t spend a lot of time practicing free throws,” said Henkenius. “Maybe shoot 10 or so a night. But Craig is such a good shooter, technique-wise, he probably doesn’t need much practice.”

Marble scored a game-high 33 points, including a sparkling 15-19 performance at the free throw stripe in leading the Hawks to the win. But, just as important, St. Cecilia outrebounded the towering Wildcats 29-27.

Leading 37-35 at the end of the first half, the Hawks used the shooting of Marble and hard-working senior forward Tom Wissing to move ahead 55-47 after three periods before a packed house. but the poised Wildcats, among the state’s tallest teams, came clawing back in the fourth period.

Led by Marble, St. Cecilia pushed to a 63-53 lead with only 3:55 remaining in the game. The Wildcats quickly cut that margin to 67-63 as lanky 6-6 center Ken Adkisson fired in six straight points and teammate Dan Ward added a follow shot. But it was too little, too late. Marble free iced the game with three free throws in the final minute and the hawk delay game ate precious seconds off the clock.

“The small court here really bothered us because we like to run and just ran out of room,” said Geneva coach Mark Cordes. “I don’t think we’ll play here again, the court is just too small. I’m not using that as an excuse because St. Cecilia played a fine game. But there are too many nice courts around to have to play on one as small as this.”

In the end, though, it was the St. Cecilia rebounding which beat the ‘Cats. Led by the 6-5 Hajny who grabbed 11, the Hawks repeatedly allowed Geneva only one shot with their work on the defensive boards.

“We just didn’t hit the boards aggressively and we sure did a lot of standing around in that third period,” commented Cordes. “And Marble had a great game for them. He’s a good player.”

geneva led 19-17 after one period, thanks to the fine shooting of the husky Ward. The 6-3 senior fired in nine points in the first quarter and led the ‘Cats for the game with 24.

St. Cecilia regained the lead at 32-31 late in the second quarter on a 20-footer by Marble and the Hawks led 37-35 at intermission.

“We are pleased with our defensive work in the first half, especially the rebounding, and the way we kept scrapping,” said a pleased Henkenius. “There were times we didn’t run our offense very well but overall we had an excellent game.’

The Hawks pulled ahead 55-47 after three periods as St. Cecilia scored the last six points of the period on a pair of long range jumpers by Marble and a 15-footer by Wissing.

For St. Cecilia, Marble paced the scoring with 33 points and led the Hawk floor game. Wissing, hitting his scoring stride as the season progresses, earned runnerup honors with 13 and Hajny, deadly inside the lane area, poked in 12 points.

For Geneva, the burly Ward led the way with 24 points while Ken Adkisson added 14 and Evan Schnegelberger tossed in 14. Schnegelberger, a 6-7 all-state candidate, led the ‘Cats in rebounding with 14.

St. Cecilia and Geneva each hit 27 field goals in the game but the Hawks connected on 16-23 at the charity stripe while Geneva could hit only 13-20. St. Cecilia had 18 fouls while the Wildcats committed 21 violations.

The Hawks were led by Steve Mahoney who tossed in 20 points. He got support from Tim Hogan with 17, Terry Jarzynka with 13, Gary Ernst with 18 and Jim Jackson with 11.

For Geneva, Rick Norrie and Don Aspegren each fired in 15 points while Jon Frank was the leader with 18 points. Pat O’Brien had 14 and Steve Wentz added 11.