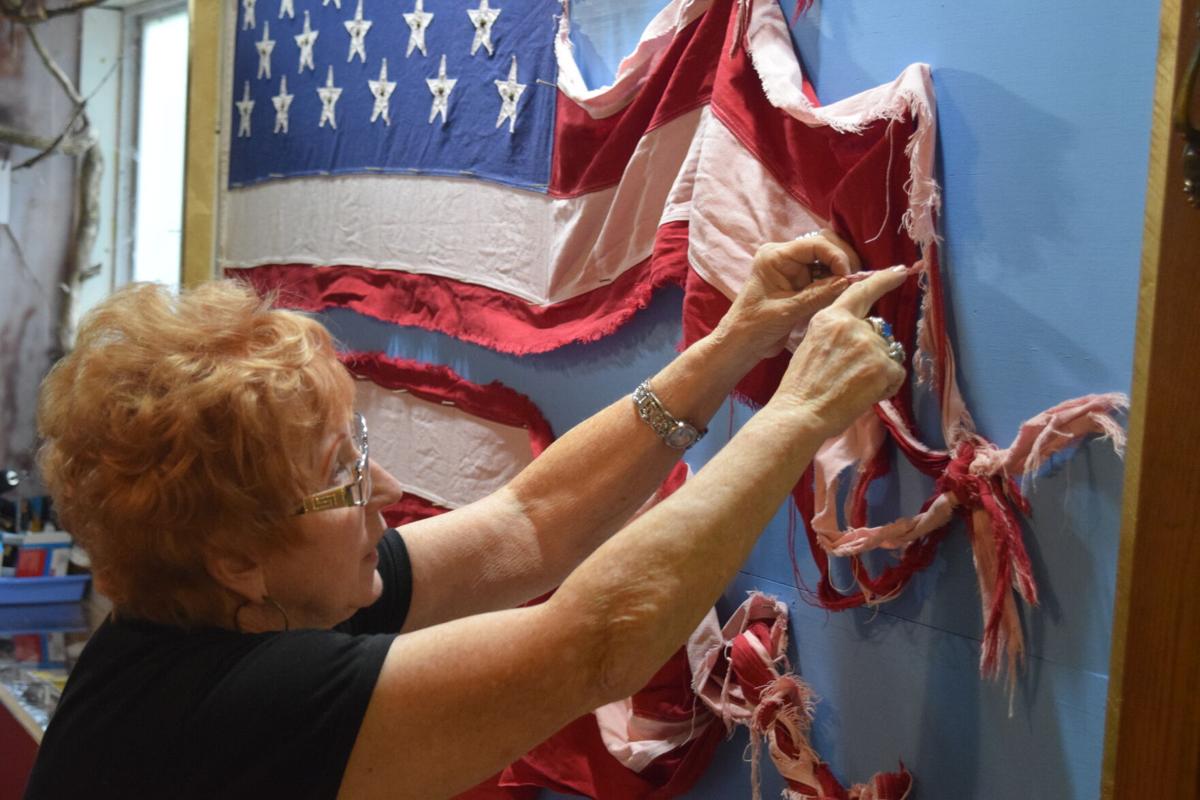 Harriett McFeely, owner of the Bigfoot Crossroads of America Museum in Hastings, Tuesday points out a tiny braid discovered among the unexplained knots and braids found in a flag from Garrison. 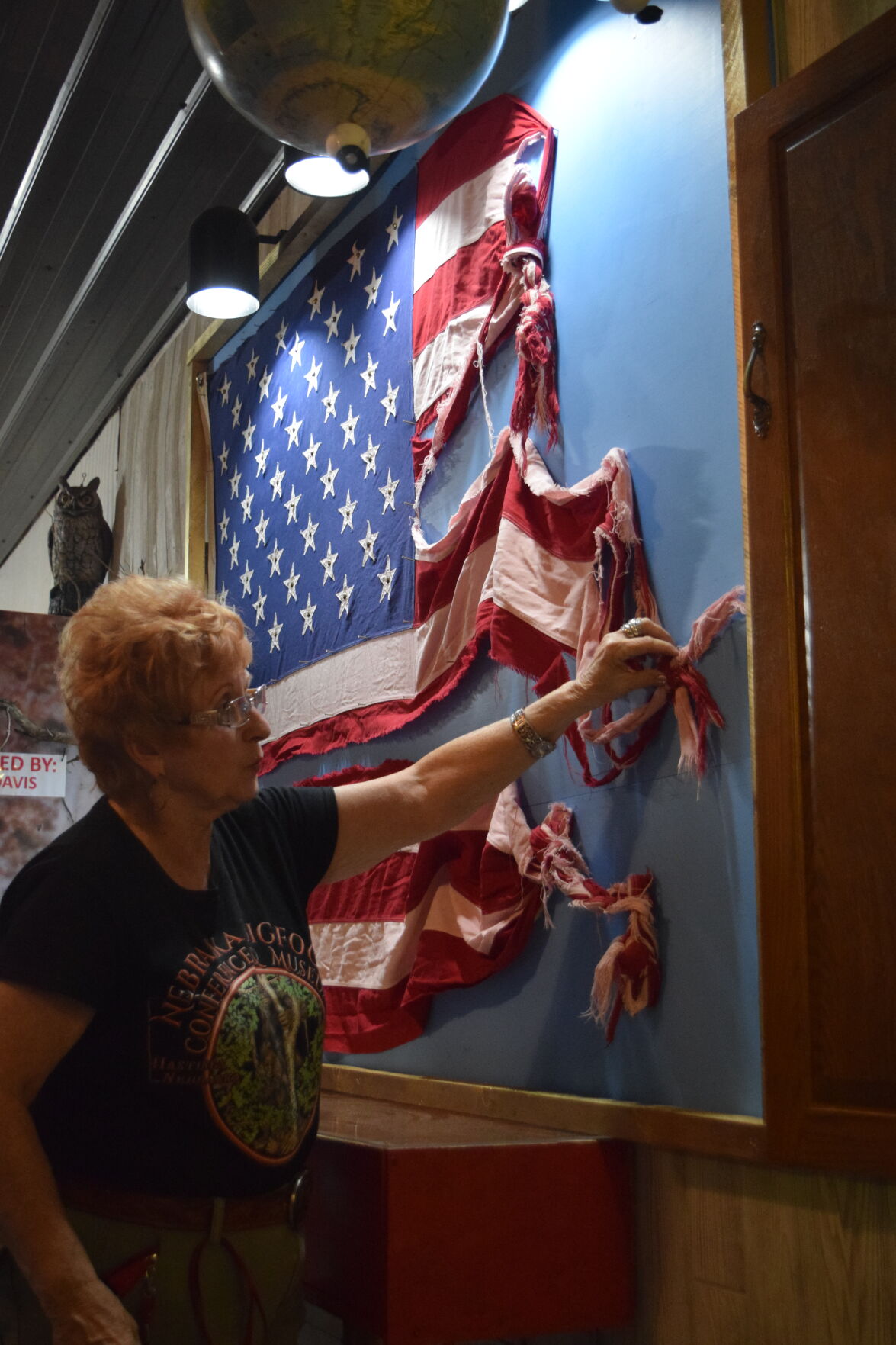 Harriett McFeely, owner of the Bigfoot Crossroads of America Museum in Hastings, Tuesday points out unexplained knots and braids found in a flag from Garrison. 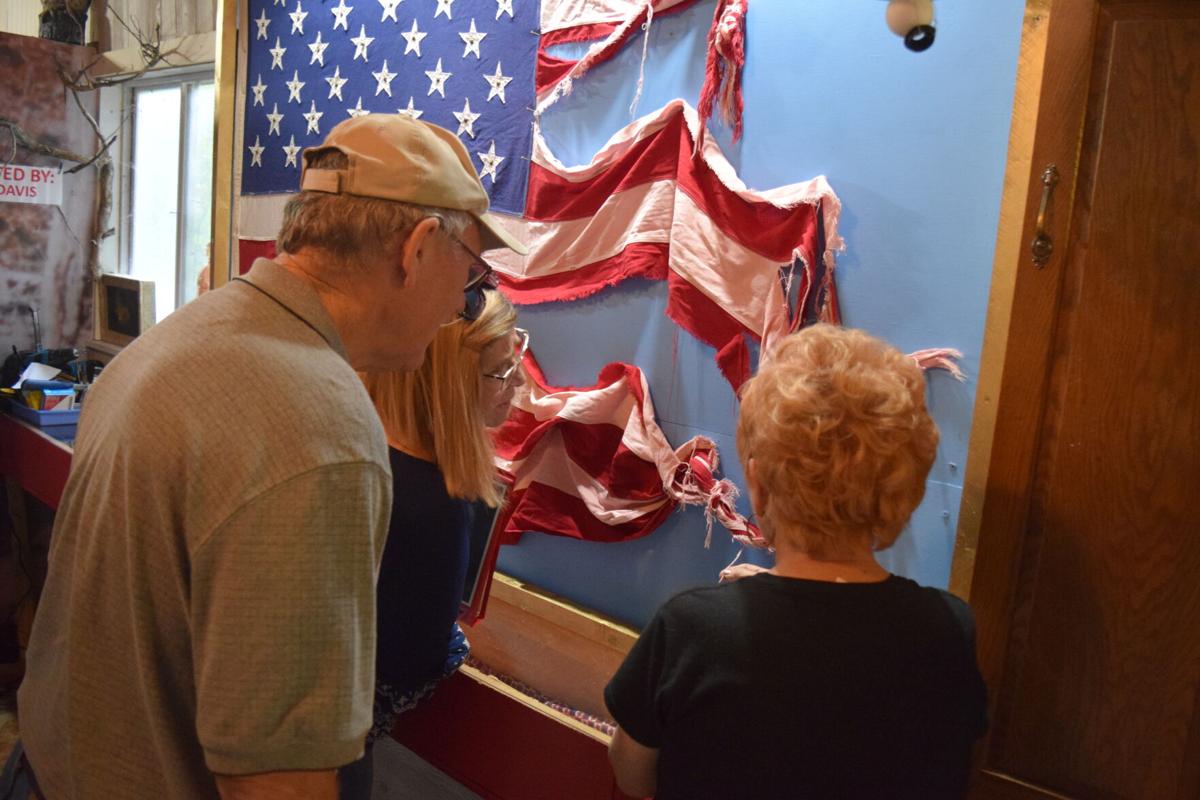 Harriett McFeely (right), owner of the Bigfoot Crossroads of America Museum in Hastings, Tuesday points to unexplained knots and braids found in a flag from Garrison to Jim Daro of Garrison (left) and Margo Hlavac of Garrison.

Curiosity surrounds an American flag that was tattered, knotted and braided at a cemetery in Garrison.

Its mysterious story now is on display at the Bigfoot Crossroads of America Museum near Hastings, where owner Harriett McFeely offered a special showing of the new exhibit to select guests on Tuesday.

The flag in question had been flying at half staff at the Garrison Cemetery on Memorial Day weekend. Garrison, population 54, is south of David City in Butler County.

Jim Daro of Garrison said his uncle George donated the flag to the cemetery 29 years ago. For nearly three decades, the flag was displayed twice a year at Garrison Cemetery on Memorial Day and Veterans Day. Though aged, Daro said, the flag still was in good condition when he put it up for the Memorial Day holiday.

But Garrison residents found the flag torn on Sunday, May 24, with several pieces appearing to be knotted, and notified Daro, who lowered the flag to replace it with another. Closer inspection revealed smaller pieces of the flag had been braided together.

Daro said many simply thought the flag had been tattered and twisted by a storm that rolled through the area the night before, but the way pieces had been braided together seemed unusual.

“I can’t explain that flag,” he said. “I am amazed at the braiding and knotting.”

Rumors of the flag started circulating through town and beyond. The story made it to McFeely a few weeks ago when a visitor to her museum shared the tale of the braided flag.

“The second she said that, I knew it was not the wind,” McFeely said.

McFeely inquired, and once she saw the braids, she thought they resembled the braids of horse hair that have been found around the world. Those braids also are showcased in another exhibit at her museum and are believed by some to have been made by Bigfoot.

The flag from Garrison now has been donated to McFeely for her museum.

While she can’t prove that the braids found on the flag were made by Bigfoot, McFeely believes it’s a possible explanation.

“I know for a fact that this is not the wind,” she said. “This really blew us away. There are so many things out there we don’t know.”