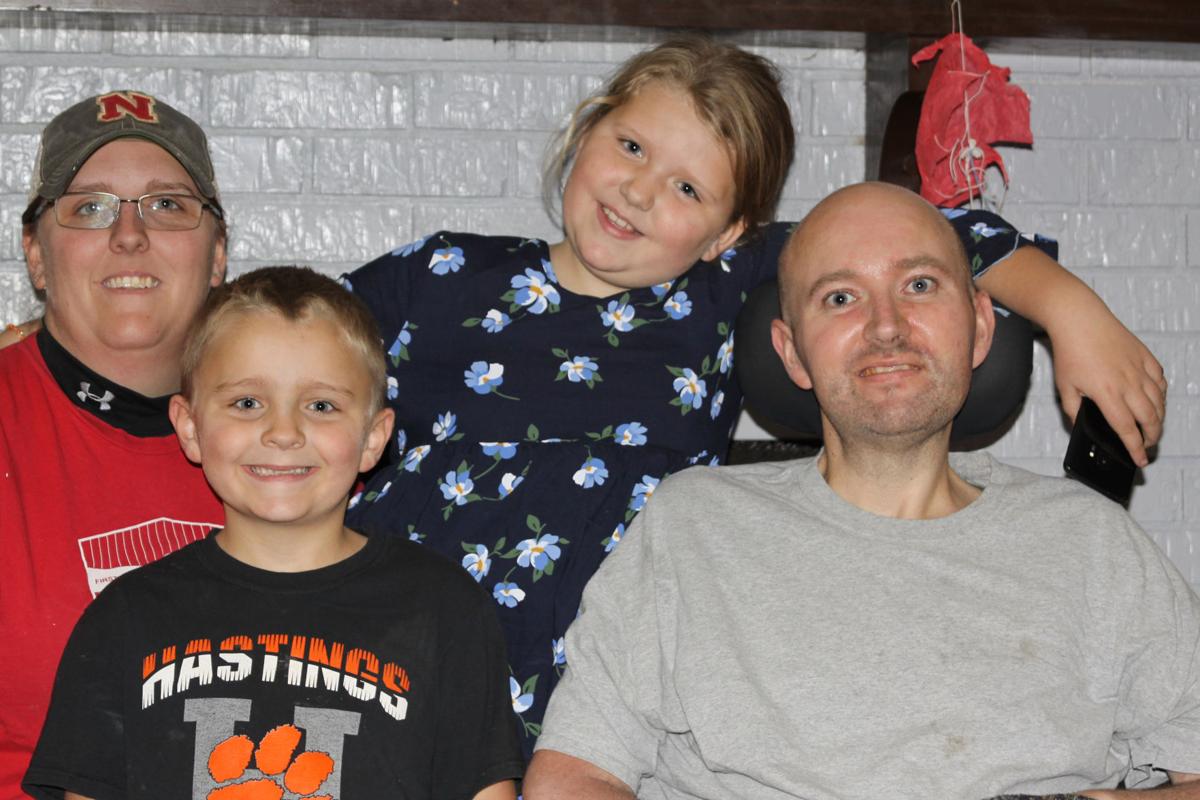 Andy and Alex Leighty are pictured with their children, Colten and Brianna, at their home Friday in Hastings. A benefit is being held Oct. 19 at the Adams County Fairgrounds for Andy who has ALS. 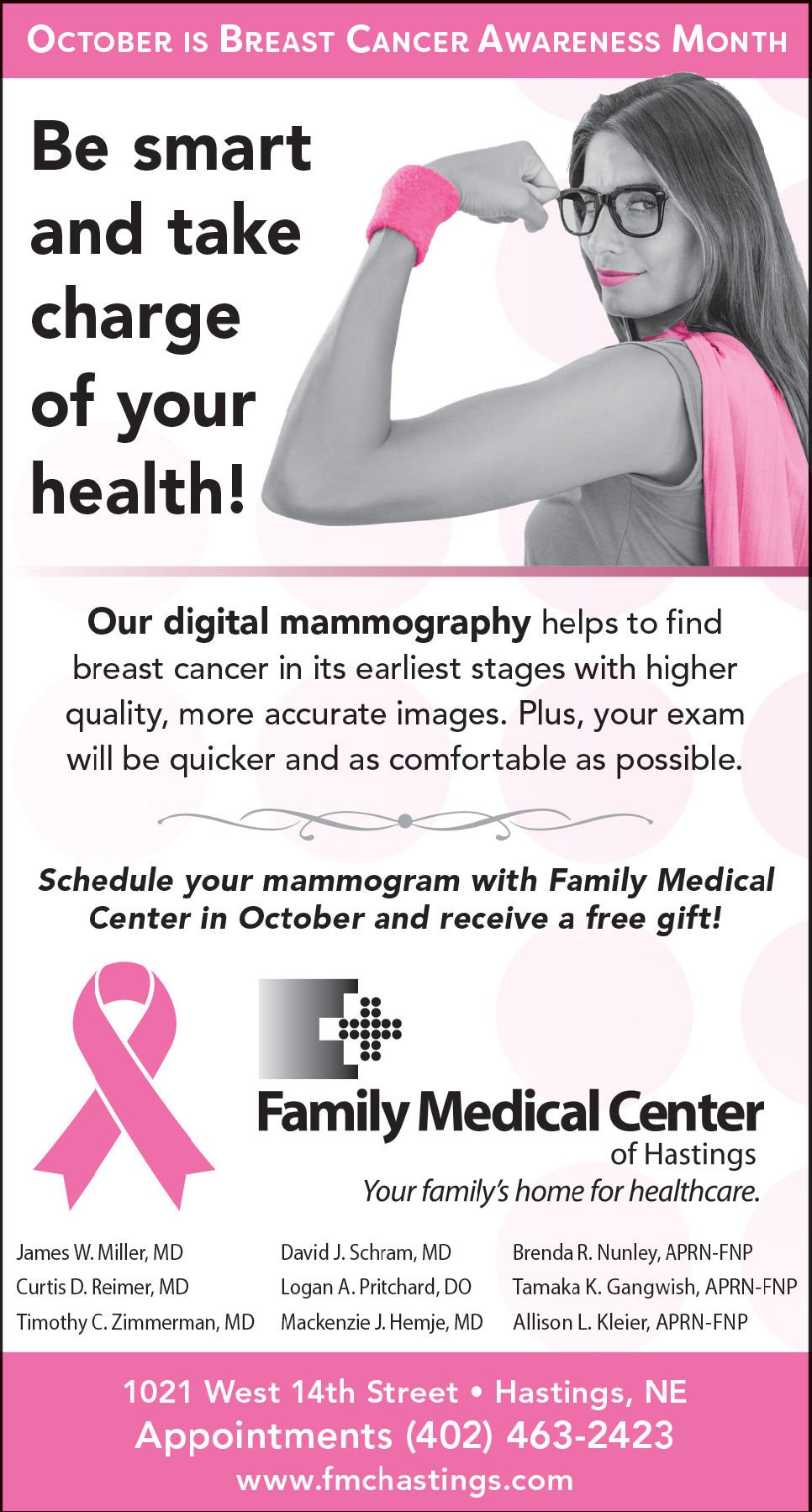 Andy Leighty of Hastings wasn’t overly concerned when he noticed his left leg was beginning to cause him problems in 2016.

After all, the irrigation business owner had been dealing with bum knees for some time. And they never kept him from the things he loved, such as bow hunting deer and other outdoor activities.

But when the problem worsened, he found he needed a cane to help maintain his balance. Just a few short months later, a walker replaced the cane. By January 2018, he was in a wheelchair.

Doctors at the Mayo Clinic diagnosed him with ALS on March 21, 2018.

The diagnosis came as a shock to all, since there was no history of the disease in the family. For Andy, an Adams Central graduate, his wife, Alex, a Hastings High student he met during their senior years at a pickup football game, and their two young children, Brianna, 8, and Colten, 6, life has become far more challenging than any of them could ever have imagined.

“We’ve just all kind of fought through it,” Alex said. “We’re not going to lie: The hard times are hard and depression happens. By no means was this ever expected.”

In his current wheelchair, it is difficult for Andy to get around. Access to the family bathroom is awkward. Travel in the family van is cumbersome. And access to Brianna’s dance lessons and Colten’s wrestling club matches is never guaranteed. All find the restrictions frustrating, but none more than the children, Alex said.

“Life is hard on our kids,” she said. “We wouldn’t ask for this as adults, but putting an 8-year-old and a 6-year-old through it, and they’ve been going through it for two years, life has changed for them. We want to give them as normal of a life as we possibly can.”

Friends of the family have organized a benefit to help purchase a more versatile wheelchair for Andy, one that will enable him to get around on the family farm without fear of getting stuck or tipping over. The event is slated for 4 p.m. Oct. 19 at Adams County Fairgrounds. Activities include a barbecue meal, live and silent auctions, cash bar, and live music featuring the band Whiskey Bent.

There will be 50/50 raffles on the hour, with gift baskets and quilts up for bid. Other items to be auctioned include Husker football tickets, bow and other hunting equipment, with additional items for women and children.

Event sponsors include Rivals Sports Bar and Grill, Custom Pack, and several other businesses and individuals who have donated items to be auctioned.

“We just want to keep it upbeat,” Alex said. “We want to keep it happy, casual, fun. Because that is what Andy and our family is. We love to just spend time with family and friends and have fun and play games.”

Sometimes called Lou Gehrig’s disease after the famous baseball player who succumbed to it, ALS is a rapidly progressing neurological disease that attacks nerve cells that control voluntary muscles. It leads to progressive weakness and disability, costing those diagnosed the ability to move their arms, legs, and body or breathe on their own. Life expectancy is two to five years, though that time frame is variable.

Treatments are costly. Experimental treatments available in foreign countries using stem cell technology are both effective and highly risky. Thus far, Andy hasn’t qualified for any of the trials the family has applied for because his condition is advanced and his genetic markers haven’t aligned with what researchers are looking for.

In most cases, ALS patients remain sharp and alert mentally. Andy is no exception. He communicates through a computer program called Tobii Dynavox which enables him to select letters from an onscreen keyboard with his eyes to produce conversation that is spoken by a computerized voice. With it, he’s able to handle the family’s finances, book vacations, grocery shop, make phone calls, and communicate with his family.

“He’s still very much Andy in there,” Alex said. “He’s ornery as heck and still makes jokes. It’s just using his computer now. It keeps him attached to the world.”

Throughout his journey, Andy has maintained a positive attitude, one he likes to pass on through his engaging smile and encouraging words to all within his ALS community of friends.

“You have two choices: You can give up and die, or live your life and thank God to be alive,” he said through Tobii Dynavox.

His upbeat disposition is fueled by the things which matter most to him: “Faith, family, friends.”

Alex said the family will use whatever funds are raised to provide Andy with the latest equipment to keep him as independent as possible for as long as possible. Her hope is to make his last days, weeks, months, or years with her and her children memorable for the right reasons.

“We love to be outdoors, and right now he’s fairly stuck indoors and it kinda sucks,” Alex said. “It’s a struggle, daily, hourly. Andy says the best way to explain how ALS is and feels is like a pregnant lady — nothing ever is right and nothing ever is comfortable.

“Every minute is different. You’re going to have your good days and your bad days. But in the end, Andy says all days are good days.”