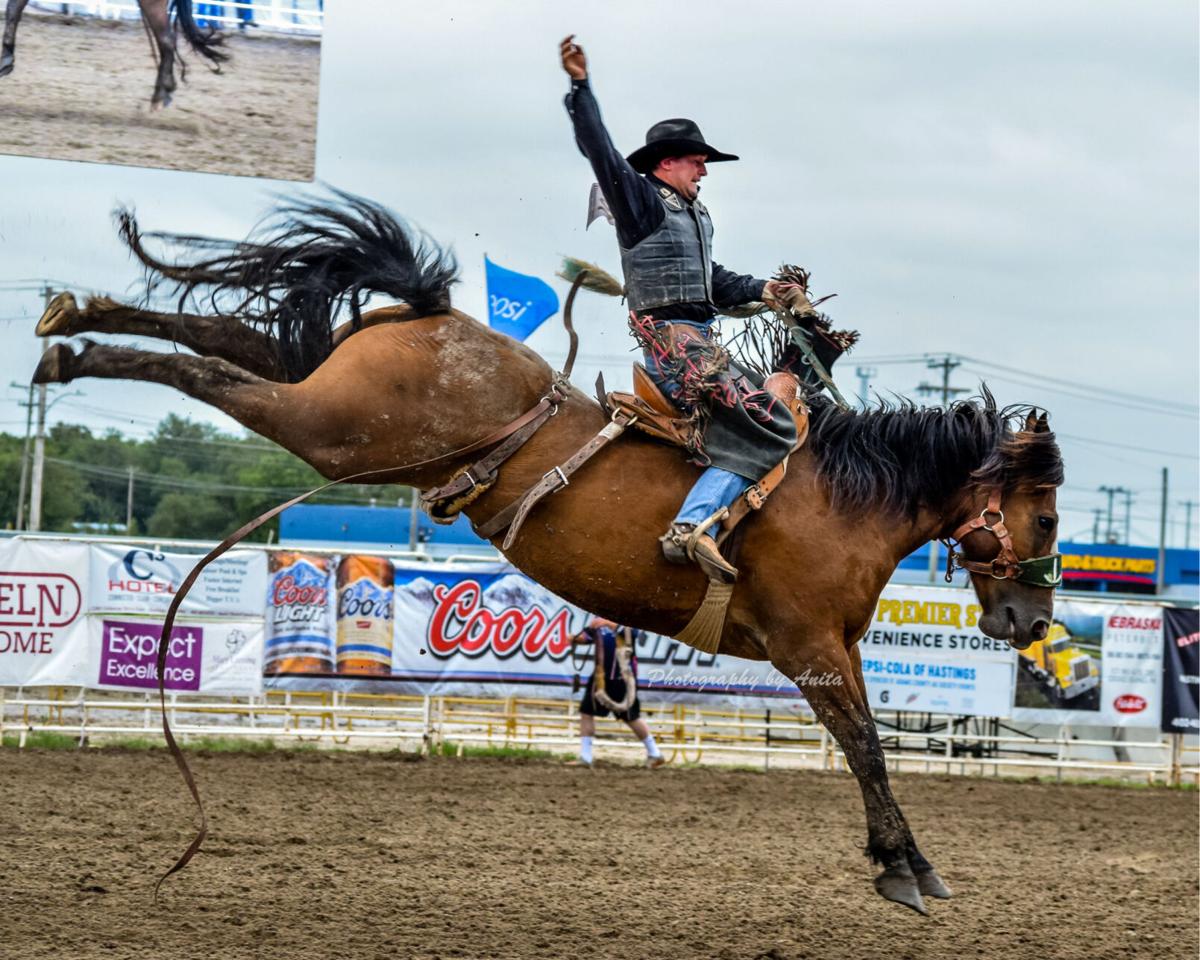 The cowboys aren’t the only stars of the show at the Oregon Trail Rodeo in Hastings.

Their four-legged counterparts have some pretty impressive resumés, too.

The bucking horses and bulls that compete at the Hastings pro rodeo have highly successful careers and their share of quirks.

One of the saddle broncs that will come to Hastings is a 10-year-old sorrel gelding named Onion Ring. The 1,300-pound gelding twice has been voted one of the top three broncs in the Pro Rodeo Cowboys Association. World champion cowboy Kaycee Feild won $50,000 riding him at Rodeo Houston in 2019, and he’s had multiple 90-plus point rides.

But he’s got a unique personality, said TJ Korkow, his owner.

“He’s a gentle giant,” Korkow said. “You can walk up to him in the pen and pet him all over. But when he gets in the chute, it trips his trigger and he knows his job.”

Most bucking horses aren’t as calm as Onion Ring. Even in the pasture, Korkow said, he can be petted.

“He’ll come up to you, you can take pictures of him, and he’ll stand right there and want to know what’s going on,” Korkow said.

On the other end of the spectrum is the Korkow horse Asian Orchid.

“She’s big, gray and kind of wild,” Korkow said. “There’s no docile to her. She’s on her A-game all the time.”

Even when she eats, she doesn’t like to associate with the other horses.

“When we grain her, she gets her own tub,” Korkow said.

As a 6-year-old, Asian Orchid has a full career ahead of her, Korkow said.

“She has a lot of rodeo life in her yet. She’s full of vinegar and spice.”

The Korkows also will bring the bulls to the Hastings pro rodeo.

On the load will be No. 517, a bull named Standard Tuesday.

The 5-year-old is black with a bald face and big horns.

No cowboy in 2019 made a qualified ride on the bull, Korkow said, and he’s been to four bull ridings this year and hasn’t been covered.

“He had the wolves at him every week,” Korkow said, “and nobody has conquered him yet. I’m not saying he’s un-ride-able, but he is so far.”

Standard Tuesday means business, he said. “When the cowboy bucks off, that’s the beginning of it. He’s going to hook somebody or something.”

The Korkow Ranch is home to 350 horses, with 150 of them ready to buck at rodeos. The rest are mares, colts, yearlings and 2- and 3-year-olds. The ranch raises all its own bucking horses; each year, it averages about 42 new colts.

They start bucking the horses as 4-year-olds, with dummies on their backs. They aren’t taken to rodeos till they are 5-year-olds, Korkow said, because they need maturity and time to grow up, and to learn the routine.

The ranch raises about 30 bull calves a year, who, as 3-year-olds, are taken to 4-H rodeos. After that, if they’re good enough, they graduate to pro rodeos. The average bull bucks till he’s about 8 years old, when bulls start to lose muscle mass and their careers wind down.

This year’s Oregon Trail Rodeo is this weekend, with performances beginning at 7 p.m. Friday and Saturday and 5 p.m. Sunday. Rodeo tickets range in price from $10-$20 and will be available online at www.Adams CountyFairgrounds.com and at the gate.

Fans are encouraged to purchase tickets online, to eliminate waiting in line at the ticket office. For more information, visit the website or call 402-462-3247.