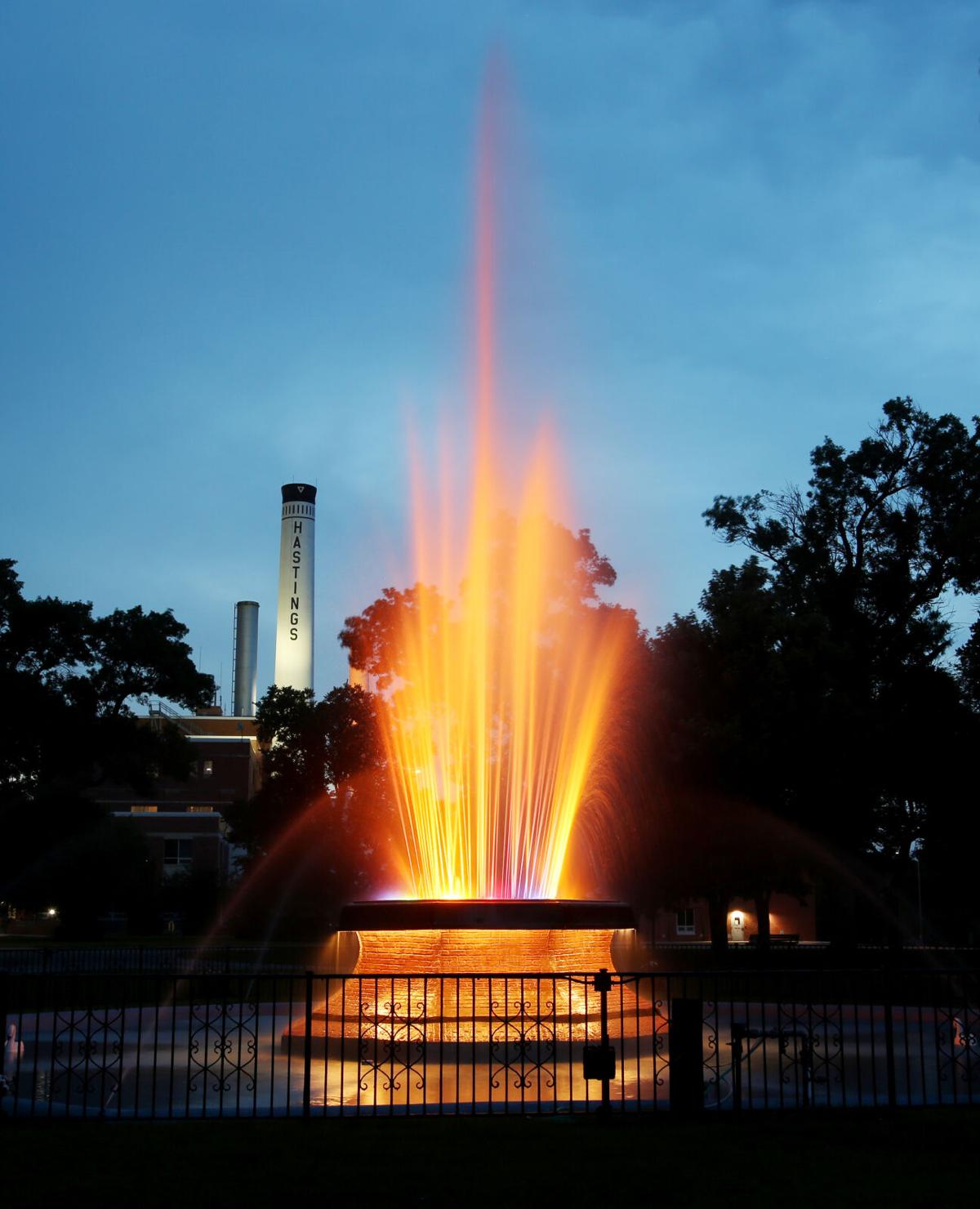 Much-needed improvements to the Jacob Fisher Rainbow Fountain planned for next spring are anticipated to delay the start of the fountain’s 2021 operating season.

Derek Pfeifer, a mechanical engineer for Hastings Utilities, spoke about the planned fountain renovations at the Hastings Utility Board meeting on Thursday.

E.R. Howard, Hastings Water and Light Department commissioner, supervised the construction of the fountain for the Adams County Fair of 1932. More than $2,200 was spent in labor on the project.

The fountain underwent a renovation in May 1983 for the 50th anniversary of its formal dedication.

Early on July 7, 1984, the fountain was ripped open by explosives tossed into the structure.

The fountain was rededicated, following renovations, in May 1985.

However, Pfeifer described what has become a cramped, dank workspace underneath the fountain where parts continue to malfunction.

To address the access and confined space issues, operation equipment will be moved to a nearby expanded mechanical building.

The fountain has to be drained and cleaned weekly.

The fountain’s pumping system is deteriorating and was shut down almost toward the end of the 2020 season.

“At the beginning of September, our goal was to run it until the end of September,” Pfeifer said. “They just couldn’t keep it going.”

There is often standing water in the access area, underneath the fountain.

The crews who work there have placed cinder blocks on the floor to avoid standing water.

The electrical system also will be replaced.

To rehabilitate the lid, which includes the lights and fountain features, the plan is to fix the bonding and attach new fittings, Pfeifer said.

LED lights would be installed there, replacing 18,200-watt incandescent lighting with 952W LED, resulting in $567 savings per year.

“It’s a huge amount of savings for the same lumen,” he said.

Pfeifer said LED lights also would improve upon the color spectrum of lights there now.

The fountain contains 15 underwater floodlights, and its 85 nozzles can shoot water up to 60 feet high.

The fountain floor is cracked. There was an effort a few years ago to address that and cover the floor with an inch or two of concrete as well as a sealant.

That will be replaced with a new sealant that is flexible, repairable, patchable and made for cracks. This sealant is used in the infinity pools for the World Trade Center.

The fence is sprayed with hard water. Overspray leaves a soggy area surrounding the fountain.

The fountain has one speed.

“As the wind comes up there’s no smart way to dial that back,” Pfeifer said

As a result, the area surrounding the fountain can get swampy.

Wind control and new nozzles for the fountain are included in renovations.

To address the draining and cleaning, there will be constant filtration system. Pfeifer anticipated that would save about 23,000 gallons of water per week, which equates to about $1,200 per year, plus labor. This also is anticipated to reduce mold.

“The fence is very old and has a lot of coats of paint on it,” Pfeifer said. “It’s in pretty rough condition.

“It’s old and has a lot of paint hanging off of it.”

Every spring, the city’s maintenance department applies another coat of black paint.

“Within about a month or so, it will be white tinged (due to the hard water),” he said.

Pfeifer is looking at a powder-coated aluminum fence. He suggested using a color lighter than the traditional black.

“Just from the nature of hard water and all that, it’s going to get a white tinge to it, anyway,” he said.

He is looking at moving the fence back 10 feet, which will give more room and better access for maintenance and room for new junction boxes for electrical and plumbing.

Improved cameras also would be installed to help prevent vandalism.

Pfeifer said the plan is to put out the project for bid Oct. 13, open bids Nov. 3 and award the contract Nov. 23.

Construction would start in March, finishing concrete on May 14, with the pool coating done June 14, and the fountain open to the public June 25.

The timeline for many of those improvements is weather-dependent. Pfeifer said it’s possible the fountain could open earlier than anticipated.

Board members also voted 3-0 to postpone board officer appointments until November, when more board members are present.