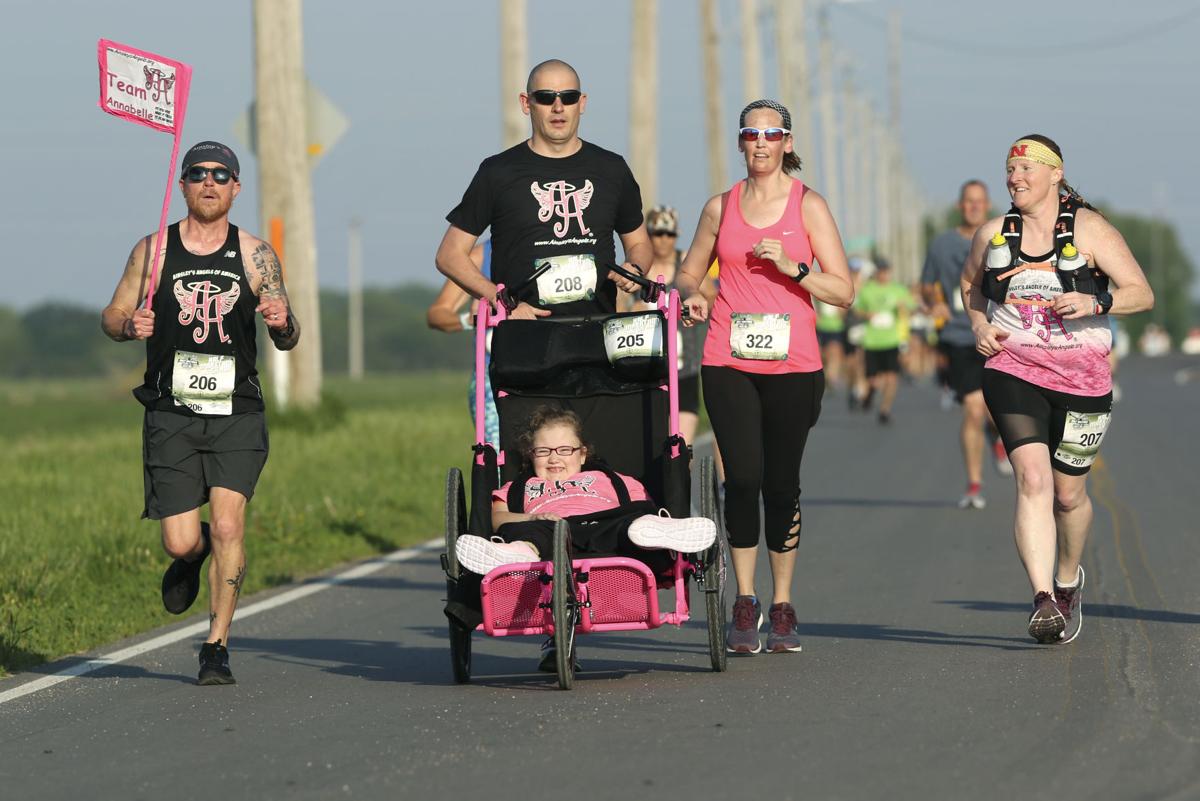 Annabelle Suhr participates in the Half Hastings half marathon Saturday with the help of Ainsley's Angels runners (from left) Jeff Morrick, Jack Sheard, Melissa Sheard and Jenny Morrick. Ainsley's Angels of America is a group focused on raising awareness about America's special needs community through inclusion. 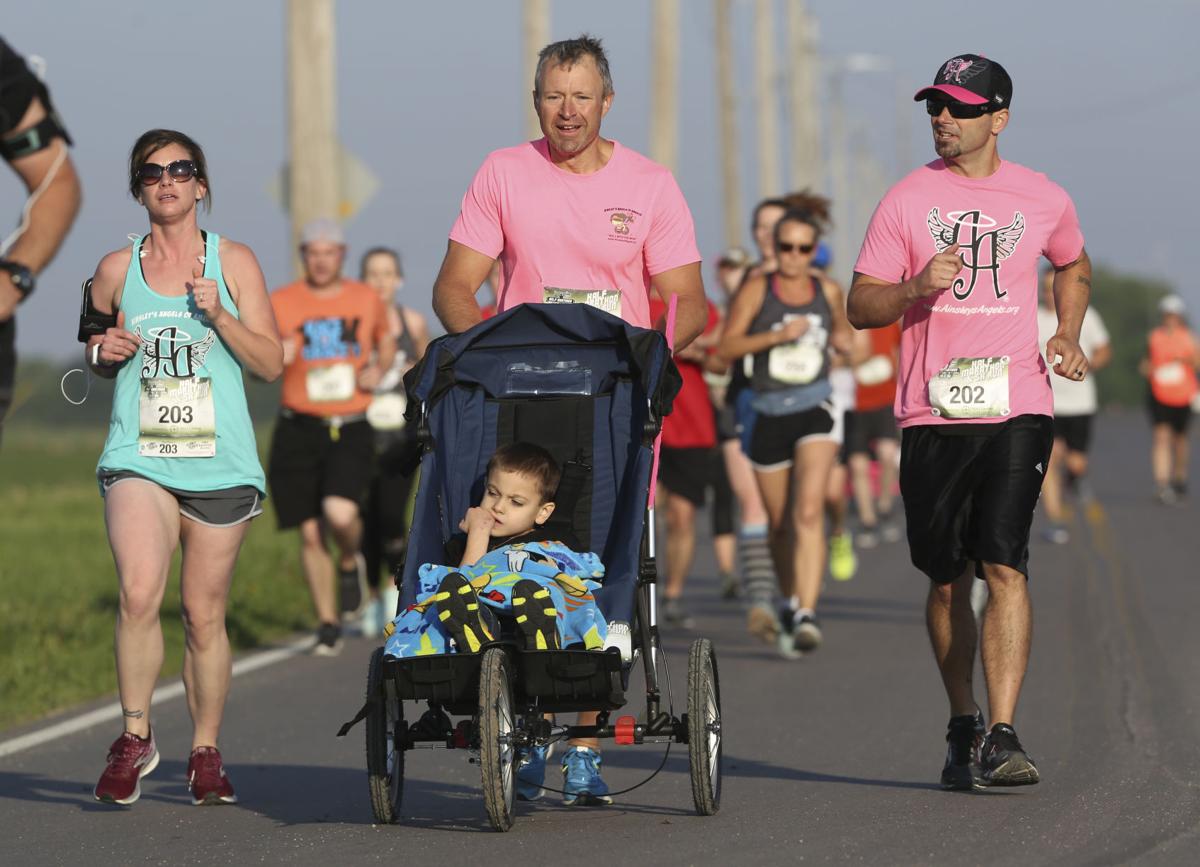 Adicen Jones (left) and Tyson Tilton (right) run with Jaime Dodge as he pushes 5-year-old Kreighton Tuma as they run the Half Hastings half marathon Saturday.

Annabelle Suhr participates in the Half Hastings half marathon Saturday with the help of Ainsley's Angels runners (from left) Jeff Morrick, Jack Sheard, Melissa Sheard and Jenny Morrick. Ainsley's Angels of America is a group focused on raising awareness about America's special needs community through inclusion.

Adicen Jones (left) and Tyson Tilton (right) run with Jaime Dodge as he pushes 5-year-old Kreighton Tuma as they run the Half Hastings half marathon Saturday.

Of all the runners who received support along the Half Hastings half marathon route in Hastings June 1, some of the loudest cheering was for Ainsley’s Angels.

Two groups of three or four runners, wearing shirts with the double A and halo logo, each pushed a rider in a racing chair.

“When we’re running with our kids, it’s not about the pace,” he said. “We’re not trying to get a PR. All we’re trying to do is make it fun and hang out with the kids.”

The races aren’t really fundraisers, except by selling merchandise.

“It’s more of how we get more riders and runners to participate with us,” he said.

Ainsley’s Angels, which is based in Virginia Beach, Virginia, was inspired by Ainsley Rossiter who was born in 2003 and diagnosed with Infantile Neuroaxonal Dystrophy — a rare terminal illness that causes global paralysis — just before turning 4.

As her illness progressed she loved riding and being pushed during runs. Ainsley died in February 2016.

Tilton is a runner who owns First Step Daycare in York.

That was also about the same time he met Jeff and Jenny Morrick of Grand Island.

Half Hastings was the first Ainsley’s Angels road race for Jenny, who — along with Jeff and their friends Jack and Melissa Sheard — helped push Annabelle Suhr of York.

“It was absolutely amazing, one of the most rewarding experiences I’ve ever had,” Jenny said. “We were on team Annabelle. It was so awesome to listen to her talk about the race. She was cheering on people that were running and would go by. It was very rewarding to see her have so much fun and to be able to be involved.”

As the groups progressed through Hastings along the 13.1 mile course, they were greeted by many spectators — including children.

Tilton said that interaction with other children is a big part of Ainsley’s Angels.

When Ainsley’s Angels participate in a road race they ask race directors to give the riders free entry with the guarantee there will be multiple registered runners per rider.

“If we had to pay for all of our riders we wouldn’t have enough money to do very many runs because right now we have five chairs,” he said. “Some of these runs you’re looking, $60, and you’ve got five riders — that gets real costly. Then you’re running around fundraising just to get entry.”

Next up for Ainsley’s Angels in Nebraska is the Laugh-and-a-Half Marathon, June 15 in Norfolk; State Fair Marathon, Aug. 24 in Grand Island as well as other races in Columbus and Omaha.

Along with Adicen Jones of York and Jaime Dodge of Lincoln, Tilton helped push Kreighton Tuma of Lexington during Half Hastings.

“All in all it was a great run, great support from the spectators,” Tilton said. “Everybody who was helping out was really nice and we definitely look forward to doing it next year as well.”

Riders families connect to Ainsley’s Angels through the orgaization’s website, social media or word of mouth. For more information go to www.ainsleysangels.org.

For Jenny Morrick, Half Hastings is one of her favorite races.

“I’ve run 42 half marathons, seven fulls and one ultra and Half Hastings is one of my favorite races I’ve ever done,” she said. “(Race director) Mike Florek does such a great job organizing the race. The course is awesome the volunteers are some of the best out there. Everybody’s so supportive and it’s very well run.”