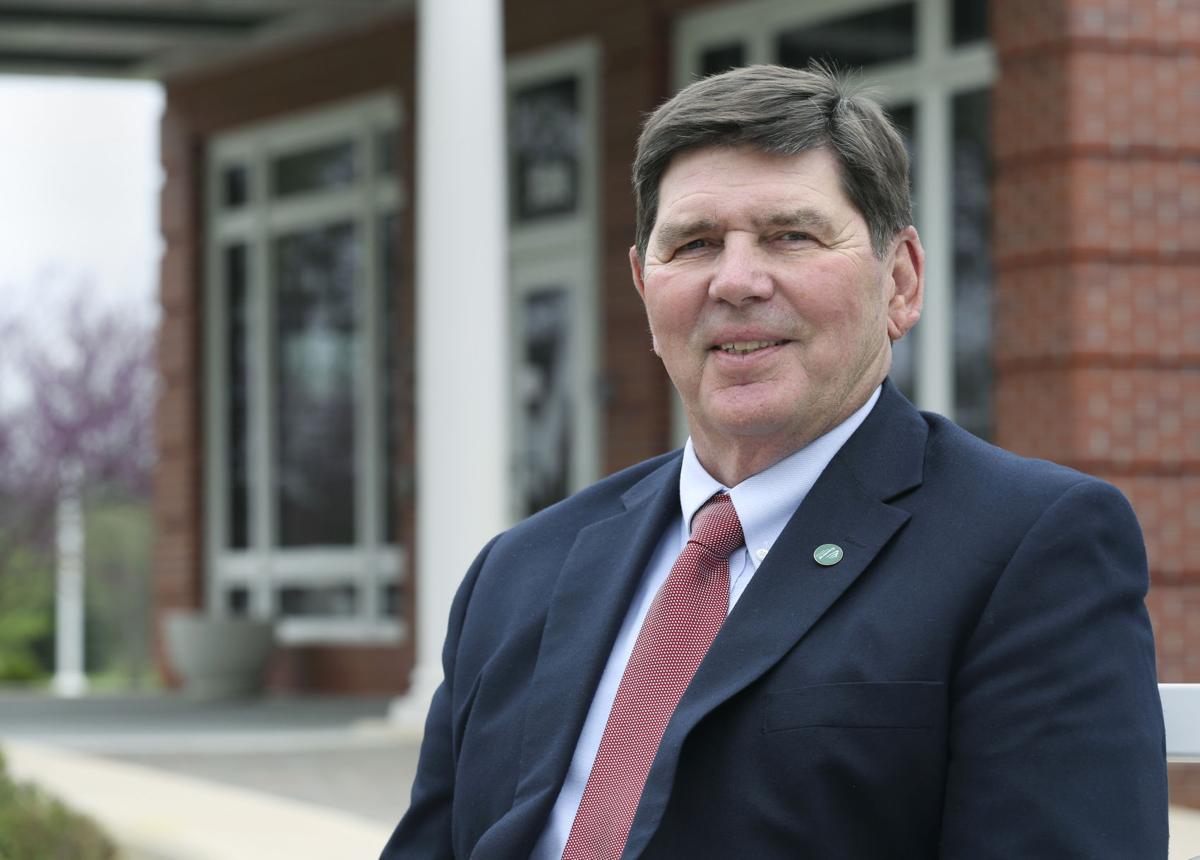 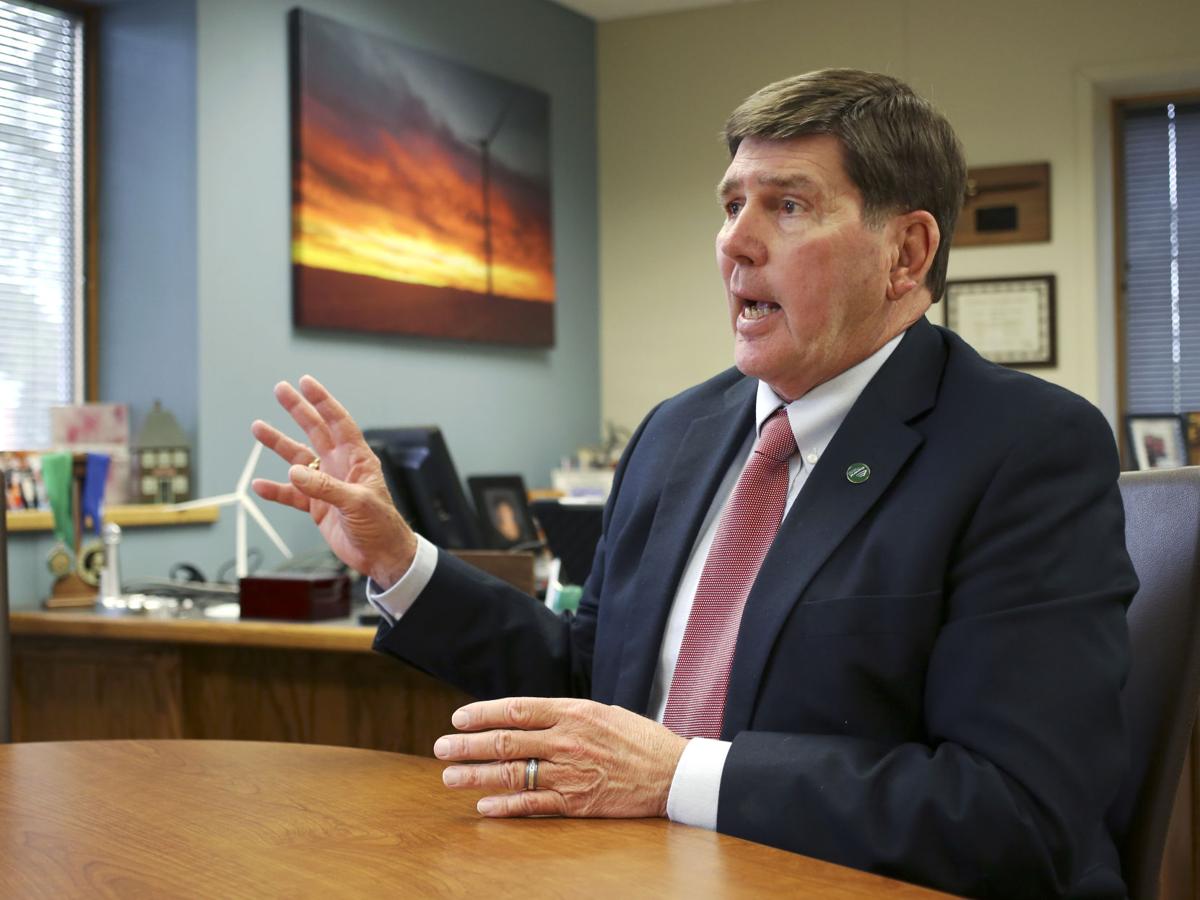 Bill Hitesman leaves Central Community College-Hastings as a transplant who developed deep roots in the community.

The CCC-Hastings commencement ceremony this year was Hitesman’s last. He announced in January he will retire June 3.

Hitesman, 68, has served as CCC-Hastings campus president since 2002. He also serves as vice president over the skilled and technical sciences and business and entrepreneurship/incubator divisions.

He will be succeeded by Jerry Wallace, who is currently dean of workforce, technical and community education at New River Community and Technical College in Beckley, West Virginia.

In recent years, Hitesman directed the groundbreaking for the Hamilton Building expansion and installation of an on-campus 1.7-megawatt wind turbine. He was also instrumental in helping bring such programs to campus as heavy equipment operator technician, truck driving, diesel technology and the forthcoming wind energy program.

“I enjoyed every minute of it,” he said. “I like Hastings, it’s my home. After 17 years, I’ve gotten to know a lot of people here and appreciated everything the community has done not only for the campus, but for myself and my family.

“Hastings has been very good. I’ve enjoyed Hastings and I plan to stay here after I retire.”

In total, his career in education spans 47 years.

Having lived in Iowa or Minnesota before becoming the CCC-Hastings campus president, Hitesman didn’t know much about the Central Community College system or the Hastings campus before arriving.

“There’s always going to be an adjustment with change, but it’s all the Midwest,” he said. “So I think the values, the people, those things are pretty much the same.”

The mission and purpose of community colleges across the country are the same too.

He didn’t know the Hastings campus was formerly the Naval Ammunition Depot.

It was important to him to work with historian, and former CCC instructor, Walt Miller to create plaques preserving the campus’ history.

“I think the history of this place is extremely valuable,” he said.

During his nearly 50 years in education, Hitesman has seen the perception change about technical schools and community colleges.

“We talk about our cost being low cost but it’s low cost with high quality, in my view,” he said. “The public’s perception over 40 years has really changed and looked at it from a standpoint of we need the skilled labor pool. We need people to look at being able to stay home, save some costs, go on to the four-year private school, university, state college.”

Over that time, the pipeline between the k-12 years and higher education has become more seamless, Hitesman said.

“In the Hastings area, in particular, we’re very fortunate here and I’ve said it main times,” he said. “Between Hastings College, Central Community College and the k-12s and ESU 9, our working relationship has been very, very positive. We’re all here trying to better our communities, better each of our areas, but I think we work so well together that it makes a lot of things possible.”

Central Community College has also worked well with industry. Fulfilling the needs of students’ future employees has been a collaborative effort, he said.

One of the most visible collaborative efforts on the CCC-Hastings is the 432-foot 1.7-megawatt wind turbine. The turbine, which was installed at the end of 2016 and came online at the beginning of 2017, is part of a public-private partnership between Omaha-based Bluestem Energy Solutions, Central Community College and Hastings Utilities.

CCC-Hastings’ commitment to renewable energy started in 2007 when Hastings won the Greenest City in America challenge from Yahoo! and received $250,000. A portion of those funds helped the college purchase a small wind turbine.

Hitesman said the desire was there at that time to start a renewable energy technology program, but that was not feasible at that time.

“It’s an evolution of over 12 years, but I would say the past two years, when the wind turbine went in, that really drove it,” Hitesman said.

The CCC-Hastings renewable energy technology program will start in the fall.

Histesman hopes the city’s planned 1.5 megawatt AC solar project, which should include more than 6,000 panels, will expand educational opportunities.

“I think it’s a tremendous opportunity,” he said. “We know there’s programs in solar, we know there’s programs in wind. The unique side of this one is battery storage. So it’s a program that’s going to be a total package in terms of having wind, solar and more importantly, I think battery technology is where things are going to go in the future because when the wind isn’t blowing, when the sun isn’t shining, all that excess energy, if it’s stored that’s going to be a game changer in the renewable energy field.”

Hitesman has served as vice chairman of the advisory Hastings Utility Board since that board’s creation in 2017.

That has been a learning experience, he said.

“There’s so much that goes on and such a large budget and such a large piece of the community,” he said. “Sitting there, it’s fun to learn more about it because I have that interest but there are so many pieces to that puzzle it’s just going to take time to learn everything.”

He enjoys the experience.

“I like the people in there,” he said. “I certainly enjoy working with Kevin (Johnson, HU Manager) and his staff. It’s definitely a growing experience and I hope to remain on it for a while.”

A leader in the Hastings community, Hitesman is a member of the Hastings Rotary Club, Hastings Area Education Consortium and Hastings Area Chamber of Commerce. He also serves on the board of Hastings Economic Development Corporation, Hastings Utilities Advisory Board, Hastings Noon Rotary Club, South Central Economic Development District, and SkillsUSA Nebraska. In 2009, he was appointed to the Judicial Nominating Commission for the Nebraska Court of Appeals Fifth District.

“I want to give back to the community that’s been so good to the college,” he said.

He encouraged involvement in the community by other CCC administrators.

Hitesman doesn’t have specific plans for his retirement. He wants to take time to step back and assess what it is he really wants to do, but he is looking forward to traveling with his wife Jody, who is special education director for South Central Unified School District No. 5, and playing more golf.

The Hitesmans have six daughters: Three in Iowa, one in Texas and two in Nebraska. Retirement will allow Bill more time to spend with them and his 12 grandchildren.

The trio had no plans to retire together, but will continue to see each other at Hastings Noon Rotary.

“We all knew we’d be pretty close in that time frame just because of our ages,” he said.