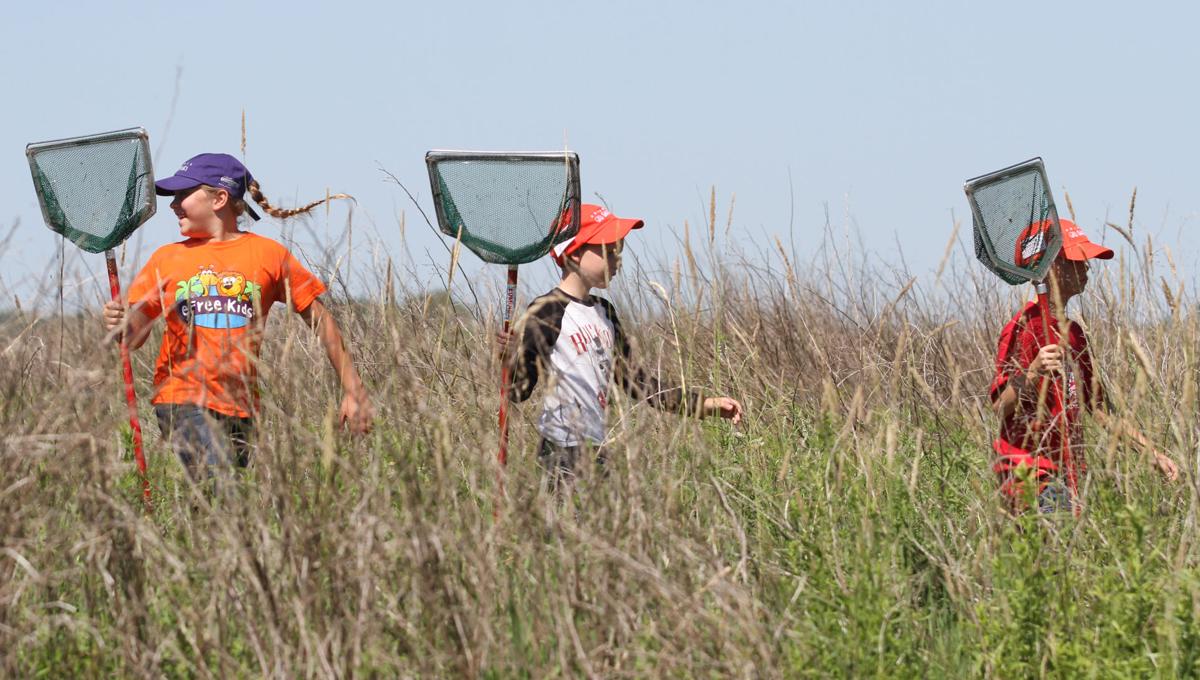 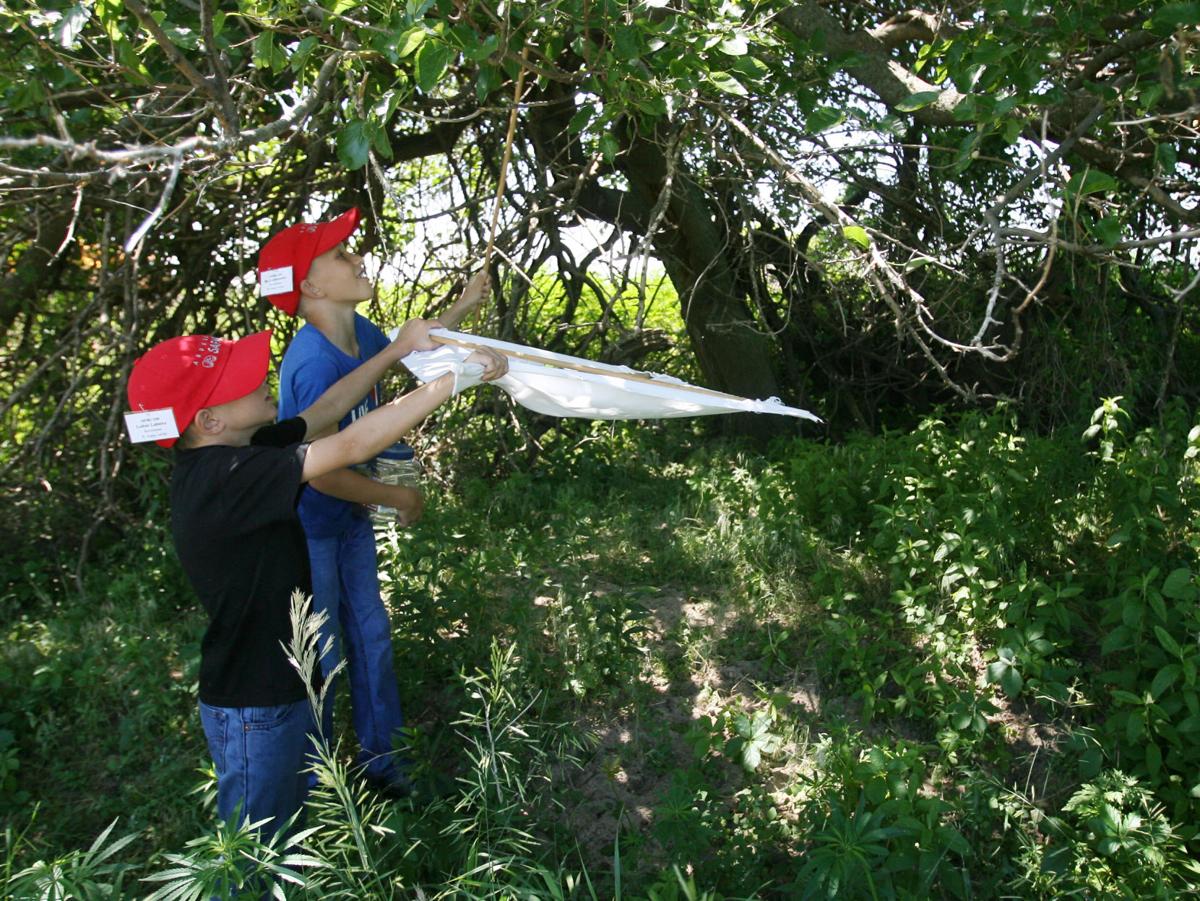 Bo Lutkemeier tries to shake insects and spiders out of a tree as Lukas Labenz waits to catch them with a canvas trap during Rowe Sanctuary’s Platte River Safari Camp Tuesday. 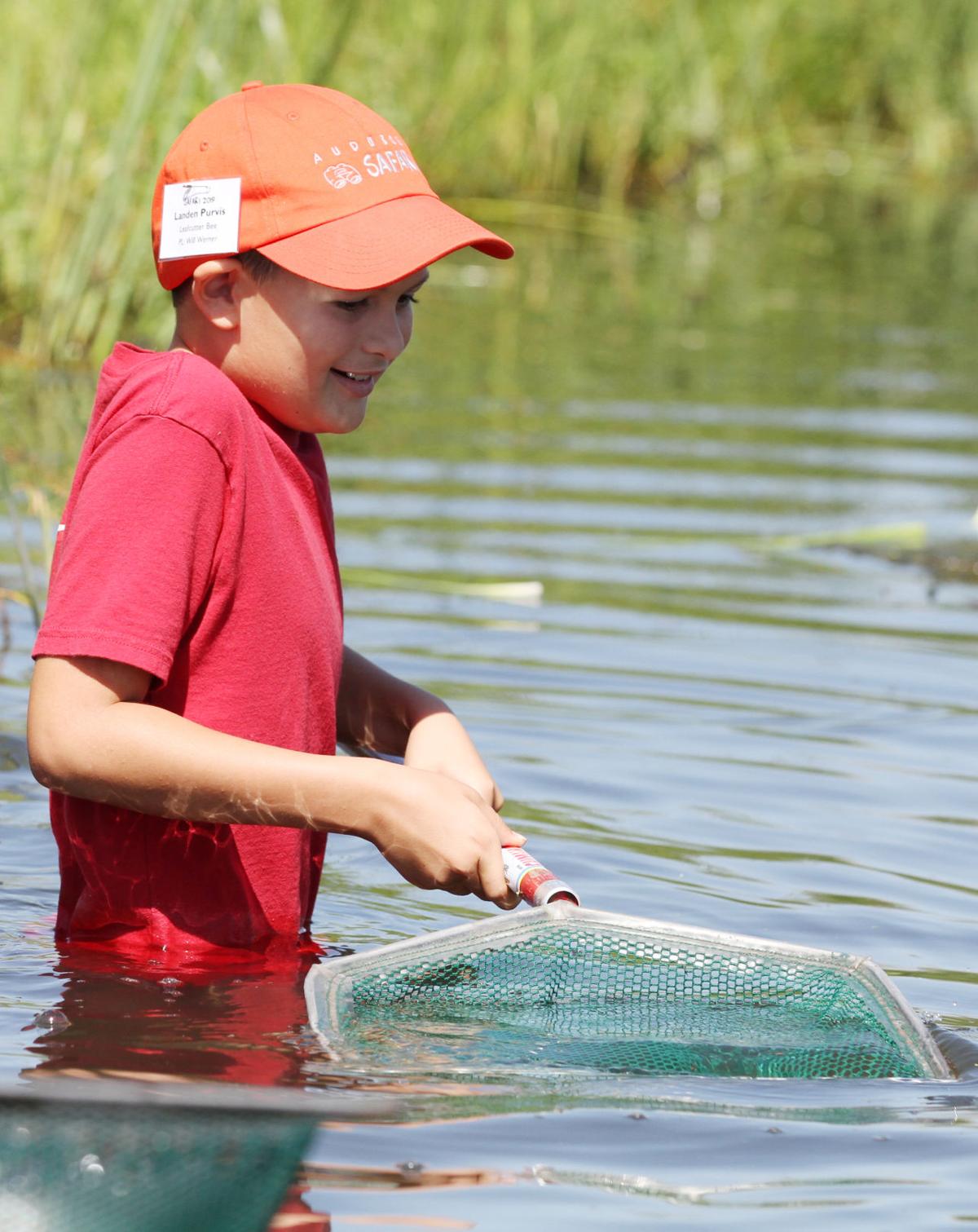 Bo Lutkemeier tries to shake insects and spiders out of a tree as Lukas Labenz waits to catch them with a canvas trap during Rowe Sanctuary’s Platte River Safari Camp Tuesday.

Audubon Rowe showed you don't need to be in the Serengeti to go on a safari - the Platte River works just fine.

Iain Nicolson Audubon Center at Rowe Sanctuary held its 13th Platte River Safari this week and last. For four days, kids learned about plants, insects and pollinators, then explored in and near the Platte River.

Throughout the safari, kids are finding insects or looking at the ones they caught. In between the searching, educators teach kids about the insects.

Usually, the camp is held in the morning, but on Wednesday, the kids spend the night at the Audubon Center.

Beka Yates, the educational manager, said having the night session opens up more educational opportunities. One of the activities includes putting powder that glows under a black light on a plant. When pollinators land on the plant, they pick up the powder and deposit it wherever they land afterwards. This lets the kids track where pollinators go.

Heidi LeClair, one of the safari's educators, has been working with the safari since 2008. This week, she helped teach 40 kids how to find small insects and why they act the way they do.

“There's so much going on that we're not aware about,” LaClair said.

One of the activities LaClair taught on Tuesday was how fireflies communicate; the male flies around, blinking a pattern and waiting for a female to signal interest by blinking the same pattern back. Usually, this leads to the fireflies mating. But sometimes, to the kids’ shock, a female firefly will eat the male instead.

They continued learning about fireflies on Wednesday night, when the kids go on a night hike to look for fireflies.

But one of the most popular activities for the kids is playing in the Platte River.

“Always, the kids' favorite thing is getting in the water and dip-netting,” said Carol Haussler, one of the safari volunteers and grandmother of several kids that participated in the safari over 10 years.

In a small, slow-moving tributary of the Platte River, kids caught anything that would fit in their dip nets.

“I caught a fish and it was pretty big,” one kid said.

“I got a tadpole,” another one said.

While some kids are hesistant about getting into the water, they eventually wade in, Yates said. One of the safari’s goals, she continued, is getting the kids comforatable with being in nature.

Different parts of the tributary held different creatures. In the deeper, middle part - where kids could get up to their shoulders in water - they caught more fish. The shallow banks held tadpoles, dragonfly larvae and snails. Teaching the biodiversity in a small area was another goal of the safari, according to LeClaire.

“You can go out into the field and it looks like grass, but there are so many different kinds,” LeClair said.

The exploration of biodiversity carries into the different themes of the safari every year. Last year, the safari focused on birds - what Audubon is known for.

About half of the students get the yearly exposure to biodiversity, returning either as a camper or as a peer leader. Leah Livingston was previously a camper and is now a peer leader.

“I love it here because you see stuff you don't see in town,” she said.

Another goal for the safari is to teach kids about environmental conservation.

“They are the conservation leaders of tomorrow,” Yates said.

LeClair said that their efforts have already been fruitful. Also a bird rescuer, LeClair said she was called by a family to save a screech owl nest that had fallen in the yard. While the parents did not feel it was necessary to call anyone, their eight-year old son urged them to call someone. When LeClair arrived to save the birds, she found out the son had gone to the safari the year before.

Additionally, LaClair's daughter, Rachel, is one of the peer leaders. After being in the safari camp and serving as a peer leader, she will be studying outdoor education in Wyoming.

“We teach them about plants, birds, pollinators and taking care of the earth,” Heidi LaClair said.

On Tuesday, the group visited a local beekeeper, Calvin Kelly. Kelly climbed into his beekeeping suit and got the bees about a foot away from the kids, who were safely inside the school buses.

Later Tuesday, the kids were split up into three groups and rotated between different locations next to the river.

While one group went dipnetting another group used spider catchers — a square piece of fabric held up by two sticks, similar to a kite. In groups, one kid held the spider catcher while another tapped on a tree branch and waited for insects to fall onto the catcher.

“Don't worry Fig and Ro, soon you'll have a new friend,” said Faith Sedlacek as her partner, Madilynne Bauer, tapped on the tree. The two ended catching four insects total and named them all after Disney characters.