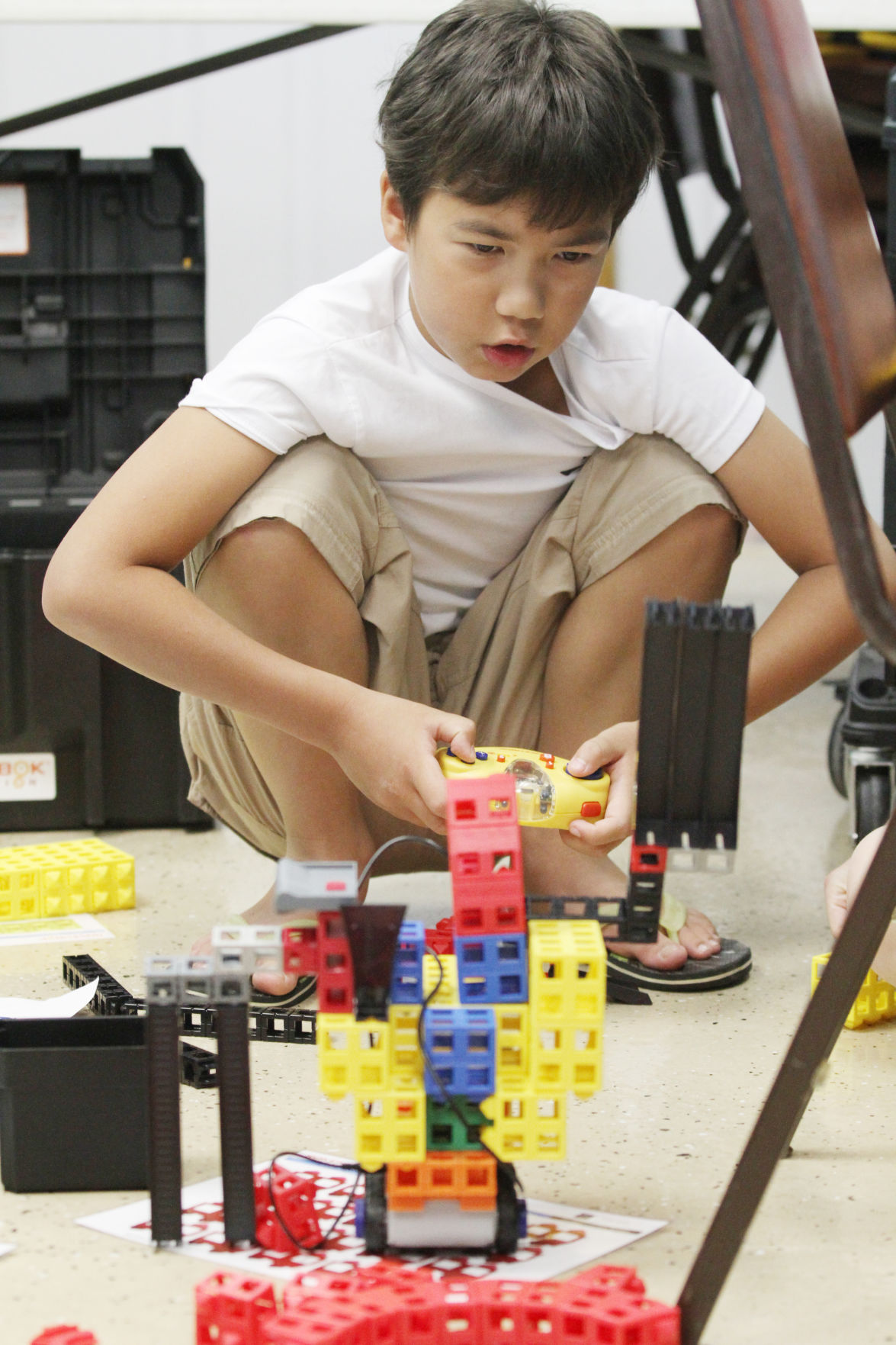 Arthur Eigenberg, 9, controls a robot he made during YMCA Robotics Camp Tuesday. 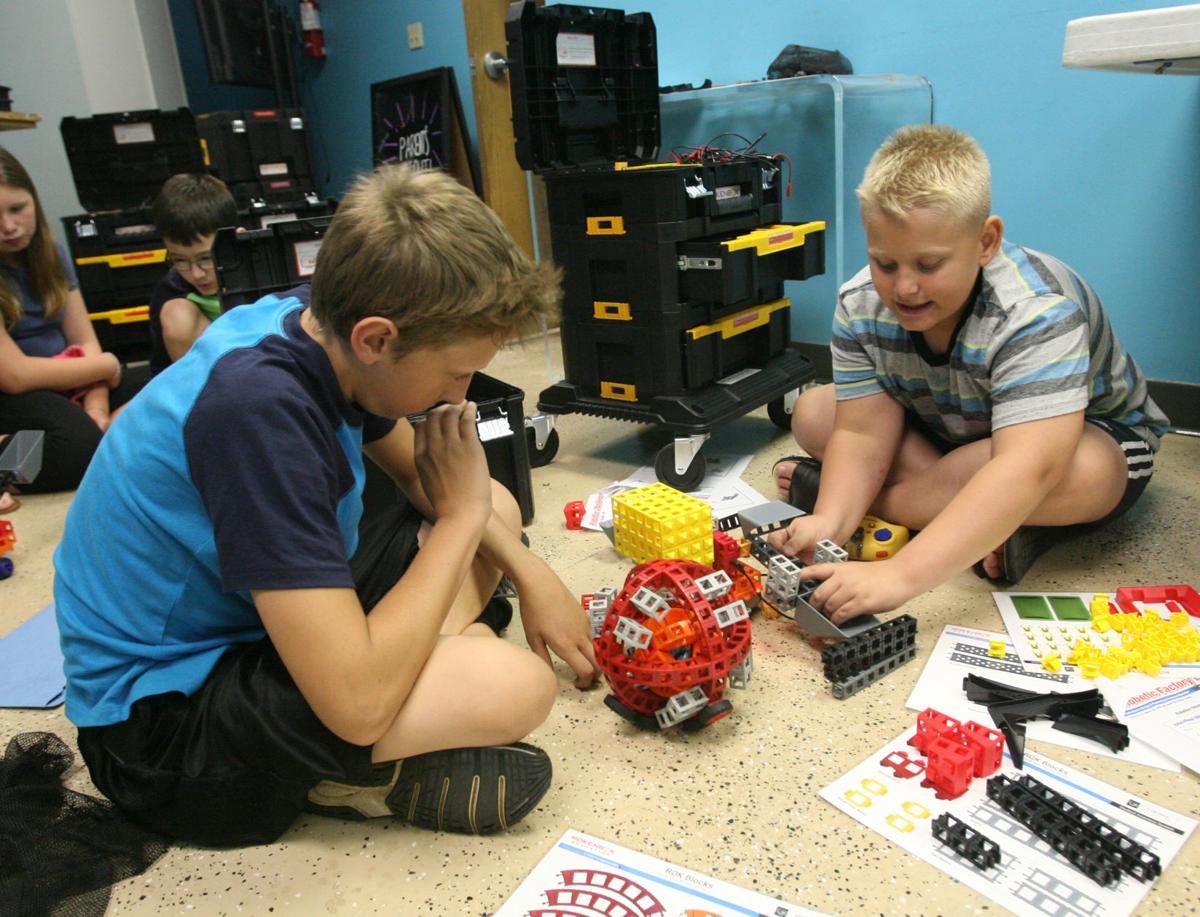 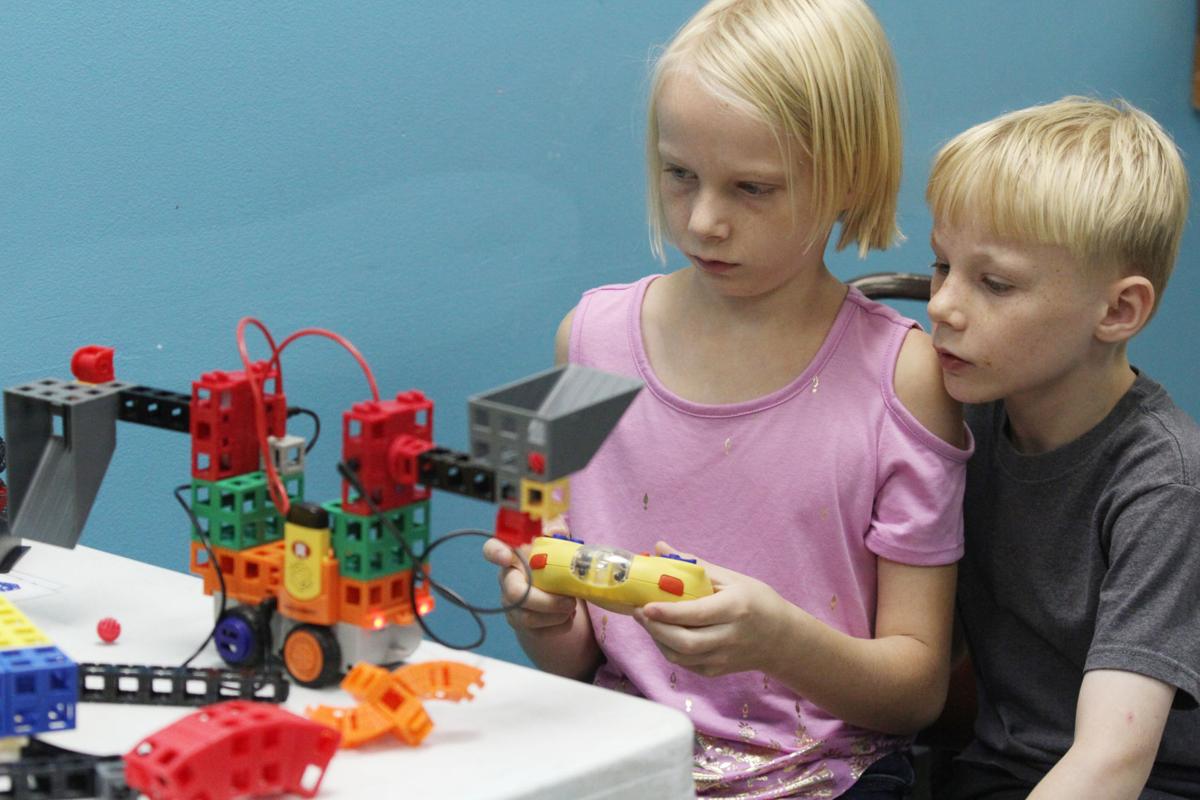 Katelyn Hoins, 10, and her brother, MIchael, 8, test the functions on a robot they constructed during YMCA’s Robotics Camp Tuesday.

Arthur Eigenberg, 9, controls a robot he made during YMCA Robotics Camp Tuesday.

Katelyn Hoins, 10, and her brother, MIchael, 8, test the functions on a robot they constructed during YMCA’s Robotics Camp Tuesday.

When Cooper Meyer, 10, and Isaah Stark, 12, began building their robots at the YMCA Robotics Camp, the design would let them pass a plastic ball back and forth between two scoops.

But shortly before they were to present their robot, the design quickly changed.

“This is our robot. It’s made for battle,” Cooper said.

The Hastings Family YMCA began offering its robotics camp this summer after receiving a grant from Union Pacific Railroad for STEM learning. They YMCA used the grant to buy Rokenbok educational toys; the building, mechanical and electric parts can be put together to build the robots. The toys can also be programmed for other tasks using available sensors with the Rokenbok kits.

Tabbie Metcalf, the YMCA’s child care director, brought the program to the YMCA to give kids the chance to work with STEM (Science, Techonogy, Engineering and Math) tools.

“Everything is ran by code somewhere,” Metcalf said.

During Tuesday’s camp, kids were tasked with building a ball launcher. The plastic pieces snapped together, similar to Legos, with additional parts like wheels, bridge pieces and double connectors.

The kids then add motors, connect wires and pair a remote controller to their creation.

The robots can be simple or complex.

During the camp, some kids made ball launching levers with long arms while others made them with short arms. One group added a second launching lever to send their projectiles in two different directions.

“It’s pretty easy. It looks complex but once you get started, it goes well,” Metcalf said.

Jacob Shin, 10, and Hannah Ahren, 11, used two moving robot bases, both of which were controlled by different controllers. One robot would launch the balls while the other would scoop up the spent ammunition and reload it.

The initial design had difficulty picking up the balls because of the scoop height and then reloading it. Jacob, like most of the kids at the camp, said designing the robot was the hardest part.

“Once we fix those bugs, it will be one of the coolest ball launchers,” Jacob said.

After the kids designed their robot and presented it, they had free time to make whatever they wanted.

“Nothing they can build is wrong. They can only improve,” Metcalf said.

The summer camp was available for kids from preschool through eighth grade.

Metcalf said that the younger kids like to have more direction in their robot-building task while the older kids enjoy having more freedom.

For most of the kids, they come to the camp with no knowledge of robots and just like building things. As the week progresses, they begin to understand how the robots work and what they can do, Metcalf said.

The building challenges can also become complex. Metcalf said one day, they built dinosaur robots that had to navigate through a maze. The kids, however, had to control the robot by talking to each other through video chatting and without looking at the robot.Metcalf said this program gives kids a chance to learn about STEM tools they may not have access to at their school or home. She added that the Rokenbok toys can be used in high school too.

“The Y is youth development for the whole mind, body included,” Metcalf said.

The program has not had an opportunity to do coding yet, but they hope to do so in the future. The kit includes sensors that can be programed to make the robots respond to it environment.

Metcalf said the YMCA can also use the robotic kits for their after school programs for Hastings Public Schools and Adams Central Public Schools.