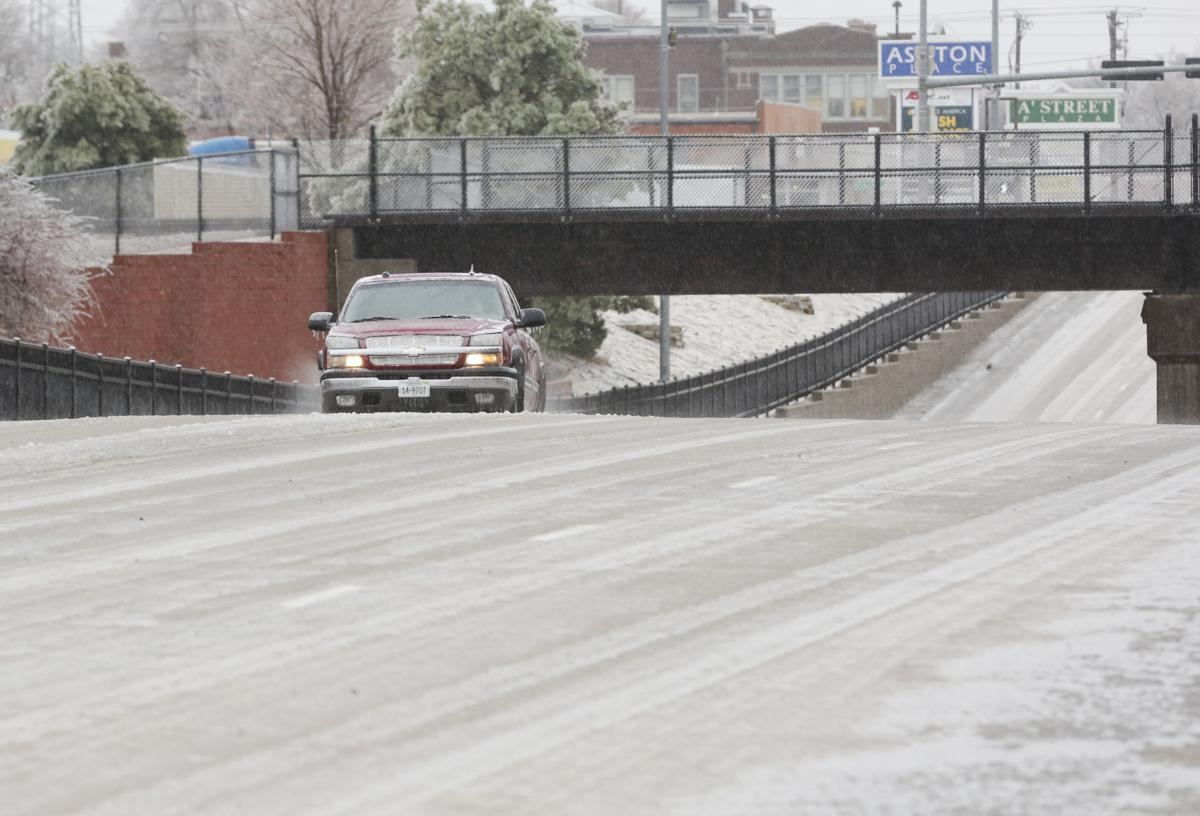 A truck drives north through the ice on Burlington Ave. Monday morning. 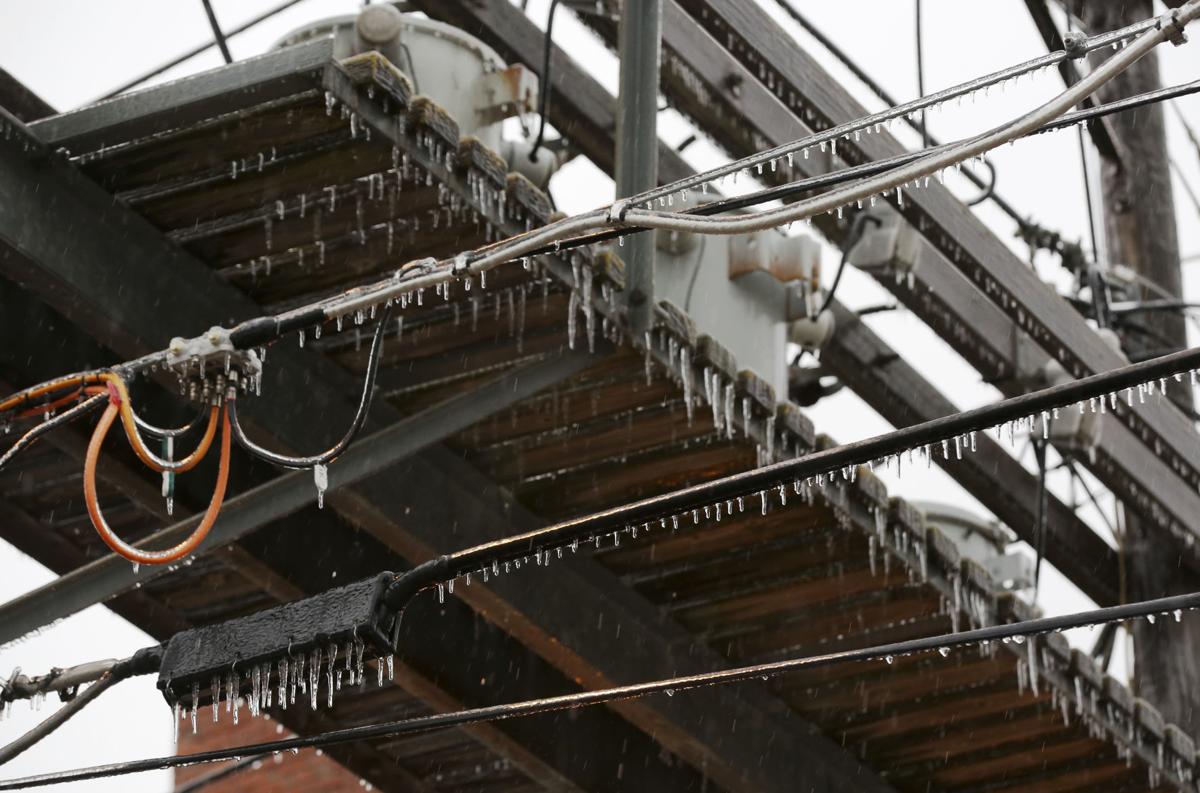 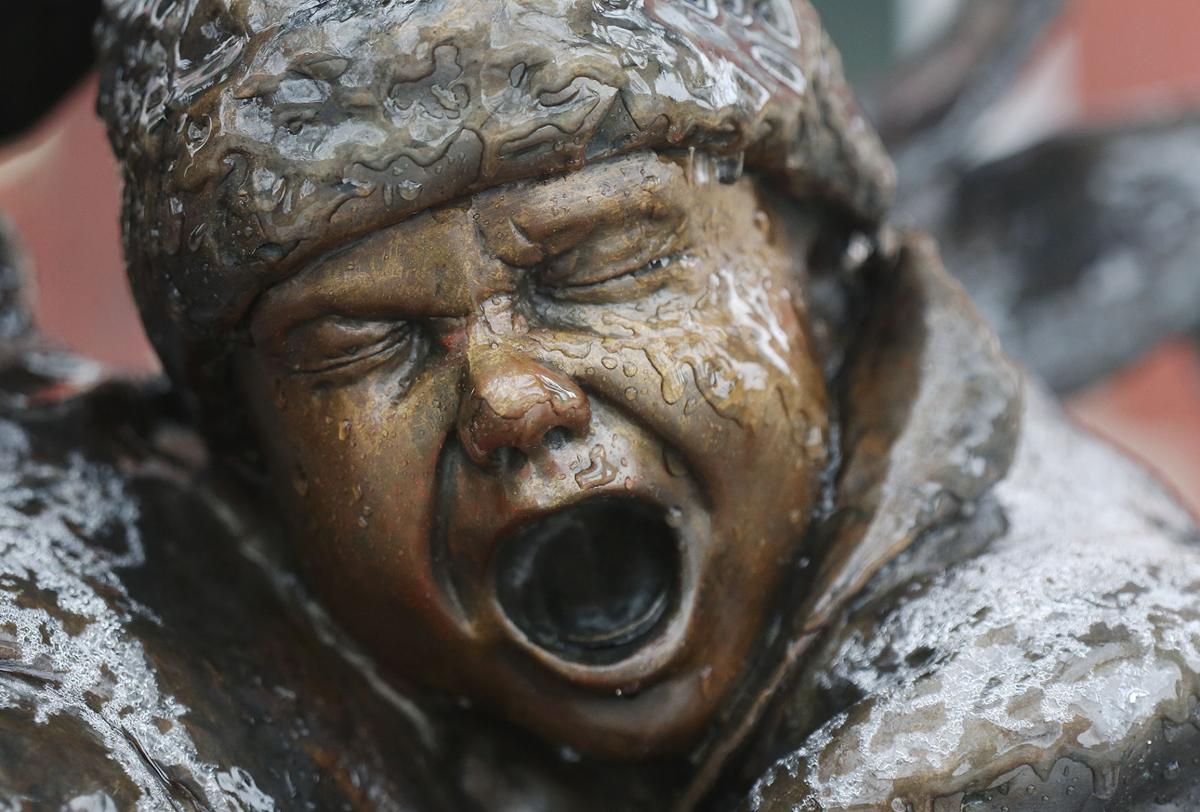 A statue in downtown Hastings is covered in ice Monday morning.

A truck drives north through the ice on Burlington Ave. Monday morning.

A statue in downtown Hastings is covered in ice Monday morning.

Most drivers in Hastings have heeded warnings to stay home in light of the freezing rain.

“Stay off the roads,” Chip Volcek, Adams County emergency management director, said Monday morning from his living room. “Seriously, I have not received any (emergency) calls. I just know it’s slick out there.”

The community has not been without some power outages.

Hastings Utilities reported on its Facebook page that shortly before 8 a.m. Monday, a power pole broke from the weight of ice causing an outage, including at the Adams County Courthouse — which is closed, Russ’s IGA and some portions of south Hastings.

HU crews continued their efforts to restore power to the areas affected earlier Monday morning. A second, much smaller area around North Bellevue Avenue and Fifth and Sixth streets was also without service because of a burned wire.

HU reported around 9:30 a.m that power has been rerouted into areas effected earlier during the morning.

Virtually all customers initially effected are back in service; however, there was a pocket of a handful of customers very near the B Street and Minnesota Avenue area that were still without service.

Crews will continue their efforts to restore service to those customers.

Area sheriff’s dispatchers reported little in the way of calls or emergencies Monday morning. The ice storm coincides with the federal Martin Luther King Jr. holiday, which would have slowed some business, governmental and school activity no matter what the weather had done.

“Please do not travel unless you absolutely have to,” Baker posted during the evening. As of 7:30 this evening Highway 14 is as slick as I can ever remember it being in 24 years at the Sheriff’s Office.”

At 10 p.m. Sunday, authorities in Minden reportedly were responding to a crash near the Garber Avenue underpass just south of U.S. Highway 6/34.

In Fillmore County, Perennial Public Power District reported at midmorning that it had restored power to most of a large area after losing its subtransmission feed to the Carleton, Strang and Milligan substations. Outage calls had been reported from Exeter, Milligan, Strang, Ohiowa and south of Geneva. The problem was traced to tree issues in Belleville, Kan.

Subsequently, Perennial reported additional outages northeast of Geneva and within the village of Ohiowa.

A Thayer County sheriff’s dispatcher said she had heard of outages in the Bruning, Deshler and Hubbell areas, but none that were widespread in nature.

In Adams County, Southern Power District crews were responding Monday morning to an outage southwest of Juniata affecting about 30 customers. At that time, the Juniata problem was the only outage in the Southern service area.

Jason Haase, officer in charge Monday morning for the Hastings Police Department, said just a handful of accidents caused by the ice as of 9 a.m. He said is not too different from a shift at the same time when weather is not a factor.

By that time, power was restored to traffic lights on South Burlington Avenue.

“As far as accidents go so far, it’s been relatively quiet,” he said. “So far so good. The main roads are all slushy and drivable with a small amount of caution.”

Side streets are more problematic.

“Staying home is obviously what we’re recommending, but if they do need to venture out, the parking lots are the real areas of concern and then the side residential streets, getting from their driveways to the main streets are the treacherous parts,” he said.

Rick Ewald, meteorologist with the National Weather Service in Hastings, said the rain would turn into snow by the late afternoon or early evening.

“It should be fairly light,” he said. “We’re expecting around an inch, give or take a little bit.”

The heaviest precipitation was southeast of Hastings and in northern Kansas.

“Once we get through this, overnight tonight, late overnight it’ll clear out and then tomorrow we may get above freezing in the afternoon, which would be good,” he said. “With the sun and that maybe it’ll melt any ice that’s left over.”

By Wednesday and Thursday temperatures should be into the upper 40s, about 10 degrees warmer than the average high for this time of year — 36 degrees.

One needn’t be armed with a Red Ryder BB gun like Ralphie in “A Christmas Story” to be wary of falling icicles today, as warming temperatures …