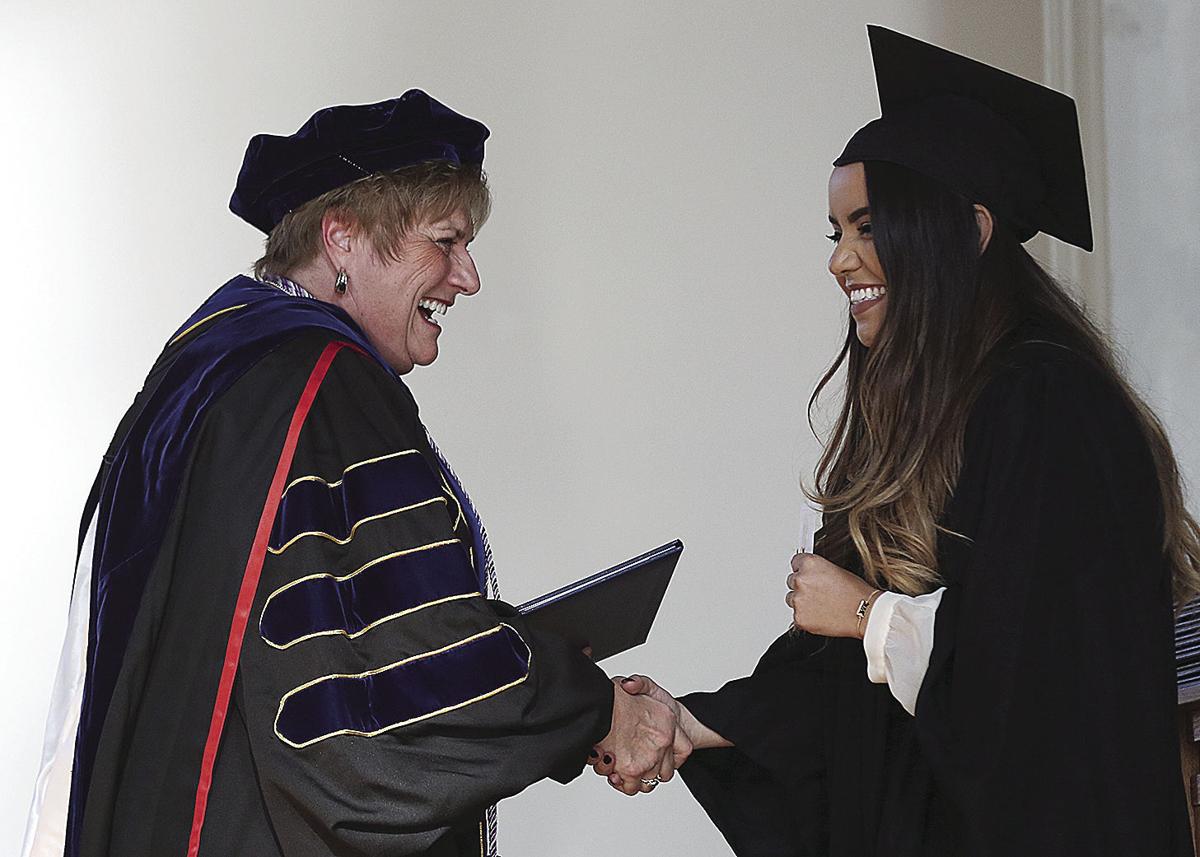 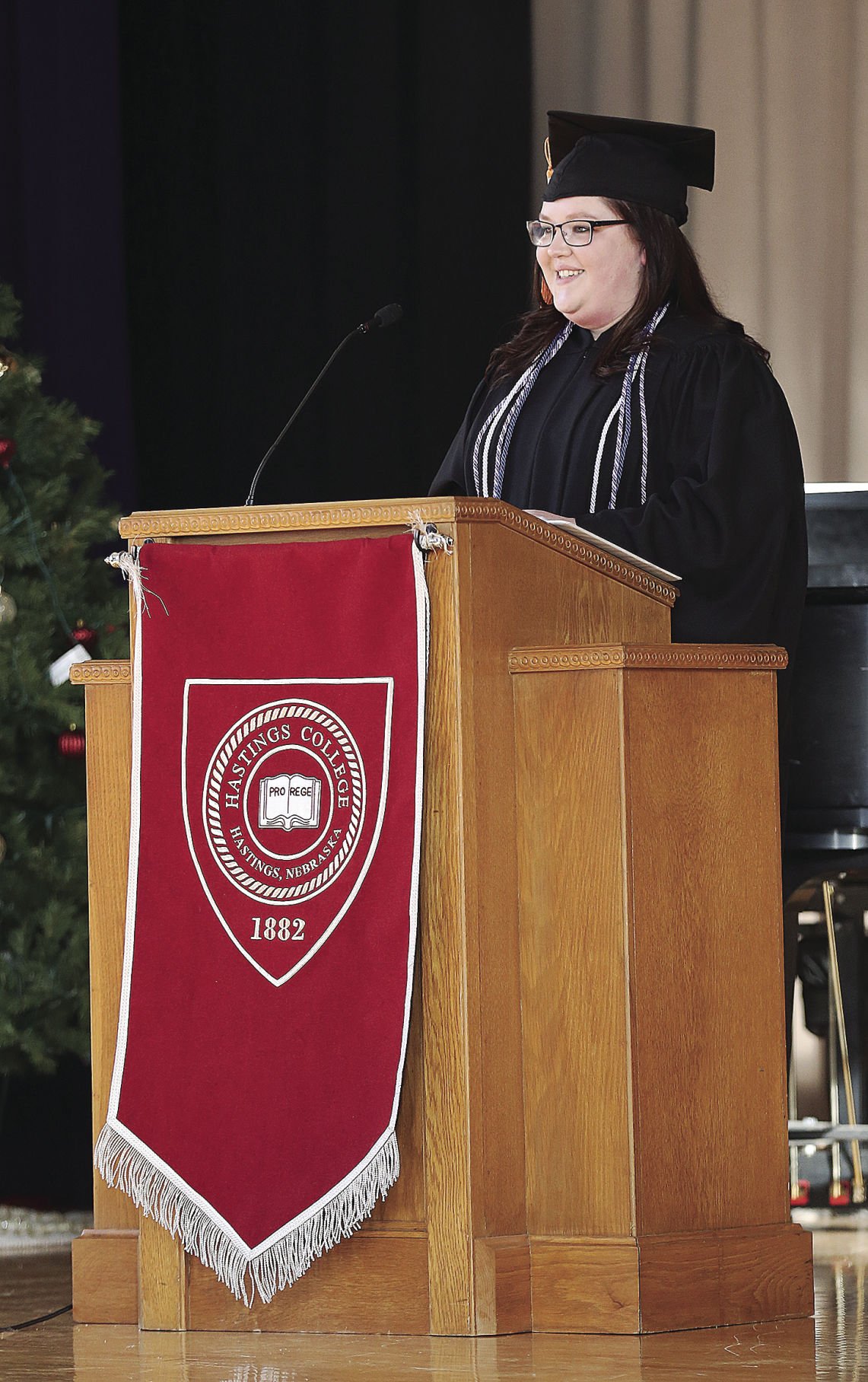 Graduate Baylie Knouse speaks before presenting the Faculty Excellence Award to Aimee Burch at the Creighton University College of Nursing pinning and hooding ceremony Thursday on the Hastings College campus. 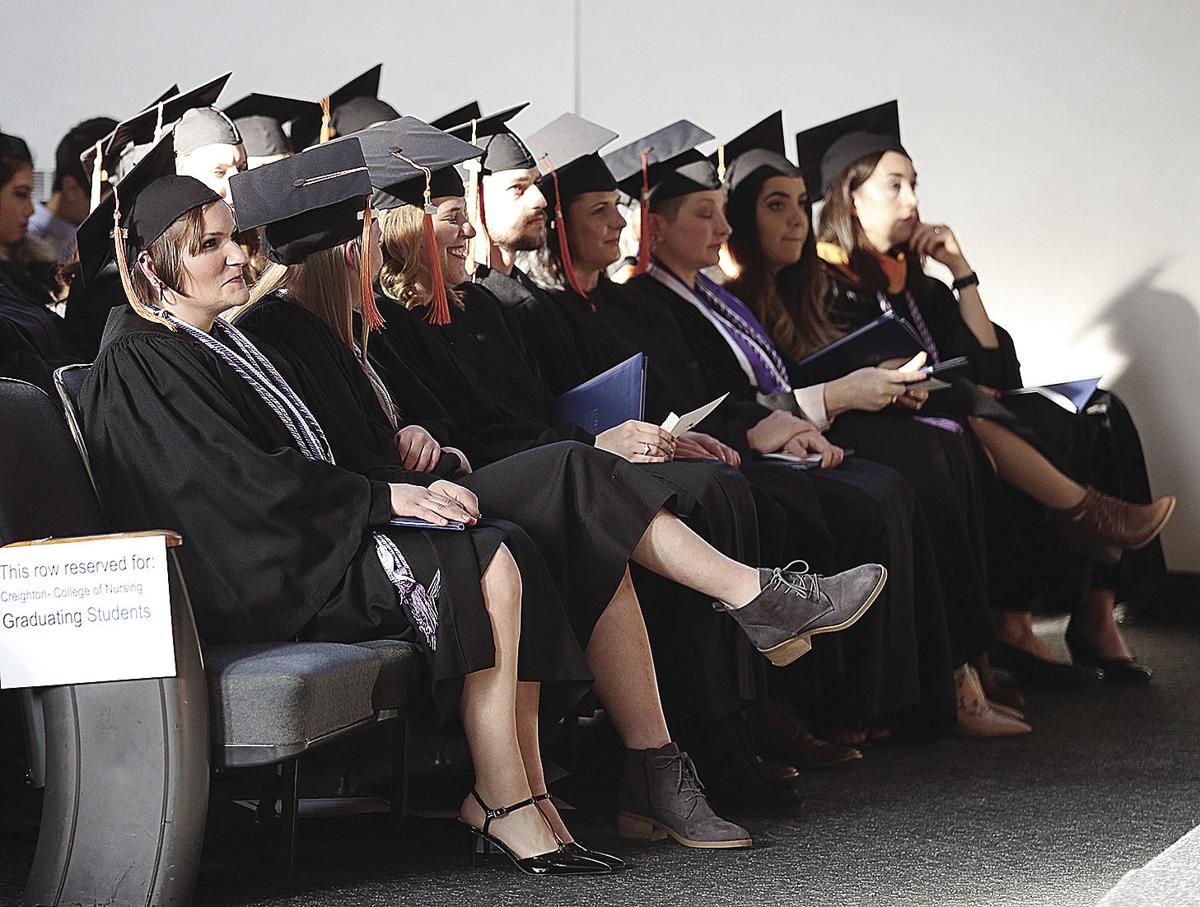 Graduate Baylie Knouse speaks before presenting the Faculty Excellence Award to Aimee Burch at the Creighton University College of Nursing pinning and hooding ceremony Thursday on the Hastings College campus.

For the first time in their program’s 32-year history, students in the Creighton University nursing program at Mary Lanning Healthcare graduated in Hastings Thursday.

Mary Lanning operated its own three-year nursing program for decades on the hospital’s campus, as other hospitals across the country did for much of the 20th century.

Then in 1986, Mary Lanning partnered with Creighton University in Omaha for a bachelor of science in nursing degree program to be executed in Hastings.

Students come to the program having already completed a bachelor’s program at another college or university. They bring with them to Mary Lanning the required prerequisites for the nursing program. Some are recent college graduates, while others are making major career changes.

Students then spend one full calendar year taking 58 credit hours and working nearly 1,000 clinical hours in pursuit of their bachelor of science in nursing. That continues to be a popular program today.

Catherine Todero, Creighton’s dean of nursing, said programs like the partnership between Creighton and Mary Lanning Healthcare are vital to the future of healthcare.

“There’s a terrific nursing shortage out there, and typically rural communities feel it the worst,” she said. “So it’s very important to educate people where they live because they will stay and be nurses for the community for the future.”

She said while educating students through the nursing programs on the Creighton campus are great, students are much more likely to stay in the Omaha area upon graduation.

“But if you educate them where they are, they’ll stay and work in that community,” she said.

Another highlight of Thursday’s graduation, which took place in French Memorial Chapel on the Hastings College campus, is that this signified the completion of the first year of a new partnership between the Mary Lanning and Creighton program and Hastings College.

In this new 3+1 program, a student will enroll at Hastings College and in three years complete a biology health systems degree before completing the one-year accelerated nursing program. The student then will graduate with two bachelor’s degrees in four years.

Of the 15 nursing students who received their pins and graduated Thursday, eight of those went through the 3+1 program between the three institutions.

Todero said she was thrilled to be able to provide a graduation ceremony in Hastings for the 15 graduates and hopes to only see that number grow in the future.

“The good news is the next group coming in is 20, and we’re hoping to grow that number even greater,” she said.

In her speech to the graduates, their families and other guests, Todero spoke of the importance of bachelor’s degrees for today’s nurses.

“Research has shown those with this level of education made a difference in patient outcome,” she said. “Nationally, there is a goal to have at least 80 percent of nurses prepared at the bachelor’s degree level by 2020. Graduates of BSN programs emerge as community and public care nurses, acute care nurses, and the next generation of nursing leaders, managers, scientists, educators and advanced practice nurses.”

Creighton University has operated a BSN program since 1928 and implemented the four-year program in 1958. The accelerated nursing program, as is used in Hastings, was first started at Creighton in 1975 at a time when many were skeptical of the program.

Hastings nursing graduate Kenzie Choquette said she was surprised and thrilled when she first saw an advertisement in the Hastings Tribune for the nursing program in Hastings.

And while she jokes that she’s old enough to be mother to most of her fellow graduates, Choquette said having this nursing program in Hastings was the best she could have ever imagined.

“My dad had an accident six years ago and broke his neck. I went and spent time with him in the hospital and said, ‘I really like this. I could do this.’” she said. “And then to find this in our backyard. How could I not do this? I didn’t have to go to Omaha.”

“I loved going to work every day,” she said. “I’ve loved every minute of it, but it’s been so hard.”

As her past bachelor’s degree had been obtained years ago, Choquette did have to retake several of her prerequisite courses at Central Community College-Hastings before entering the accelerated nursing program.

“But now I’ll be able to wear comfy shoes and comfy clothes and do what I love every day,” she said.