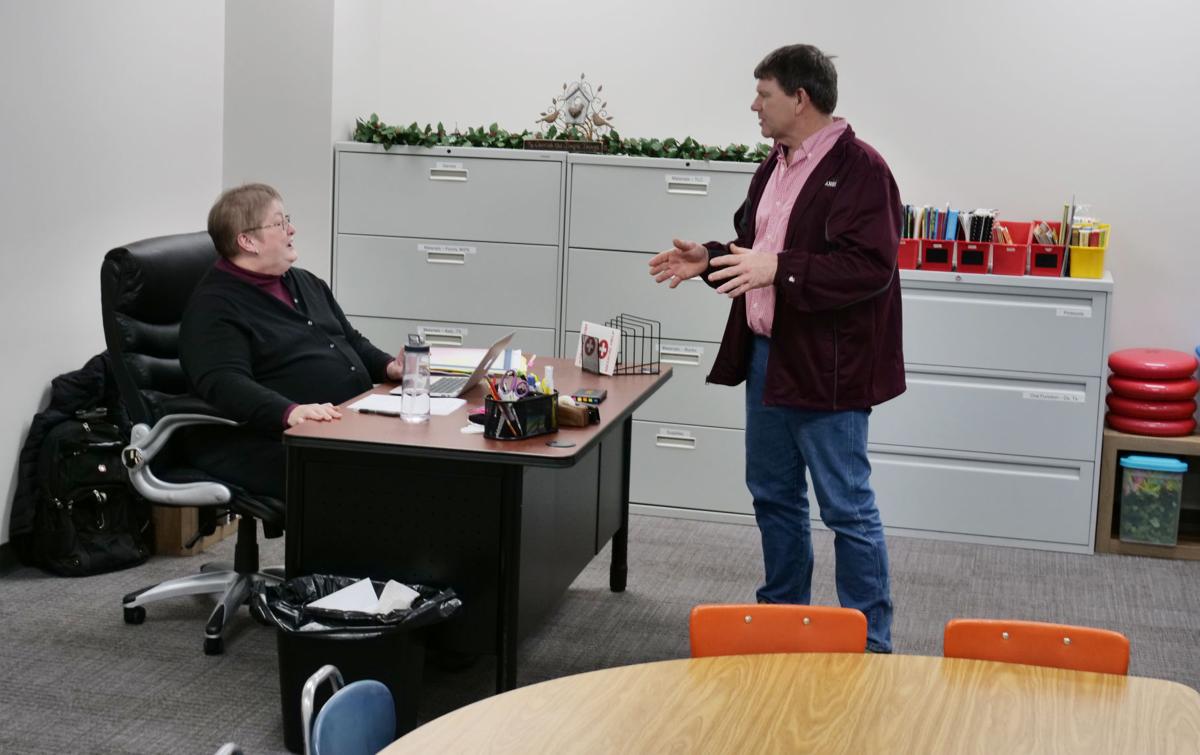 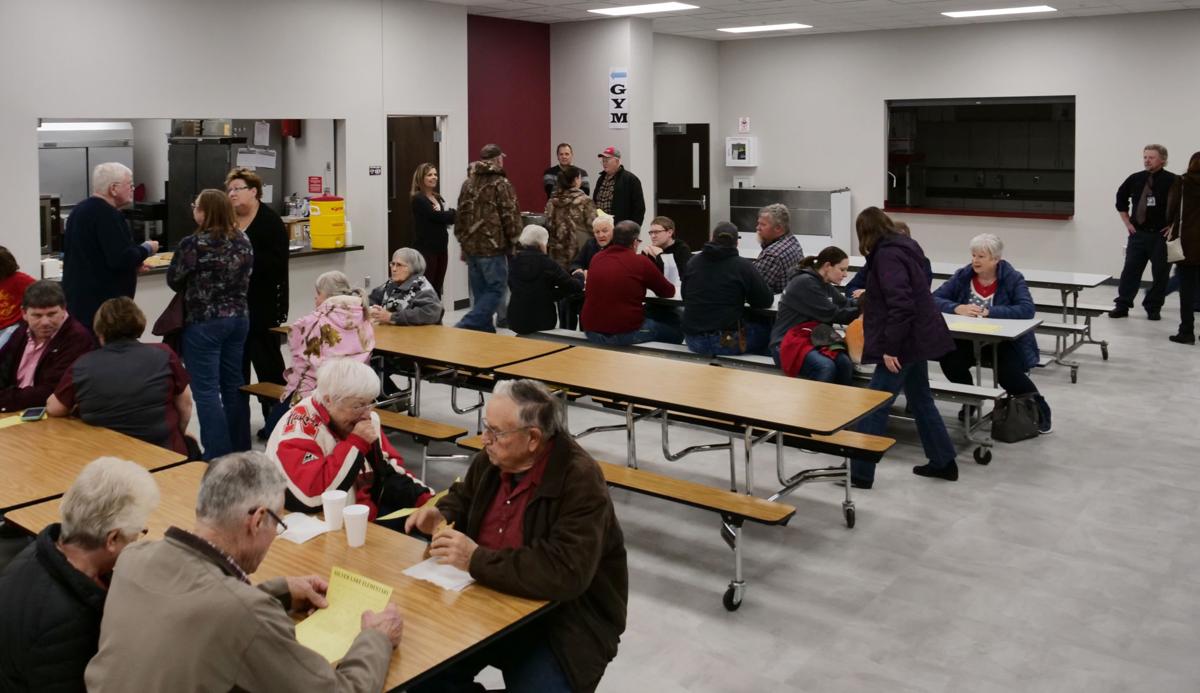 Community members congregated in the cafeteria during Silver Lake Elementary’s open house Thursday evening. The cafeteria extended the elementary and creates a common space the older building did not have. 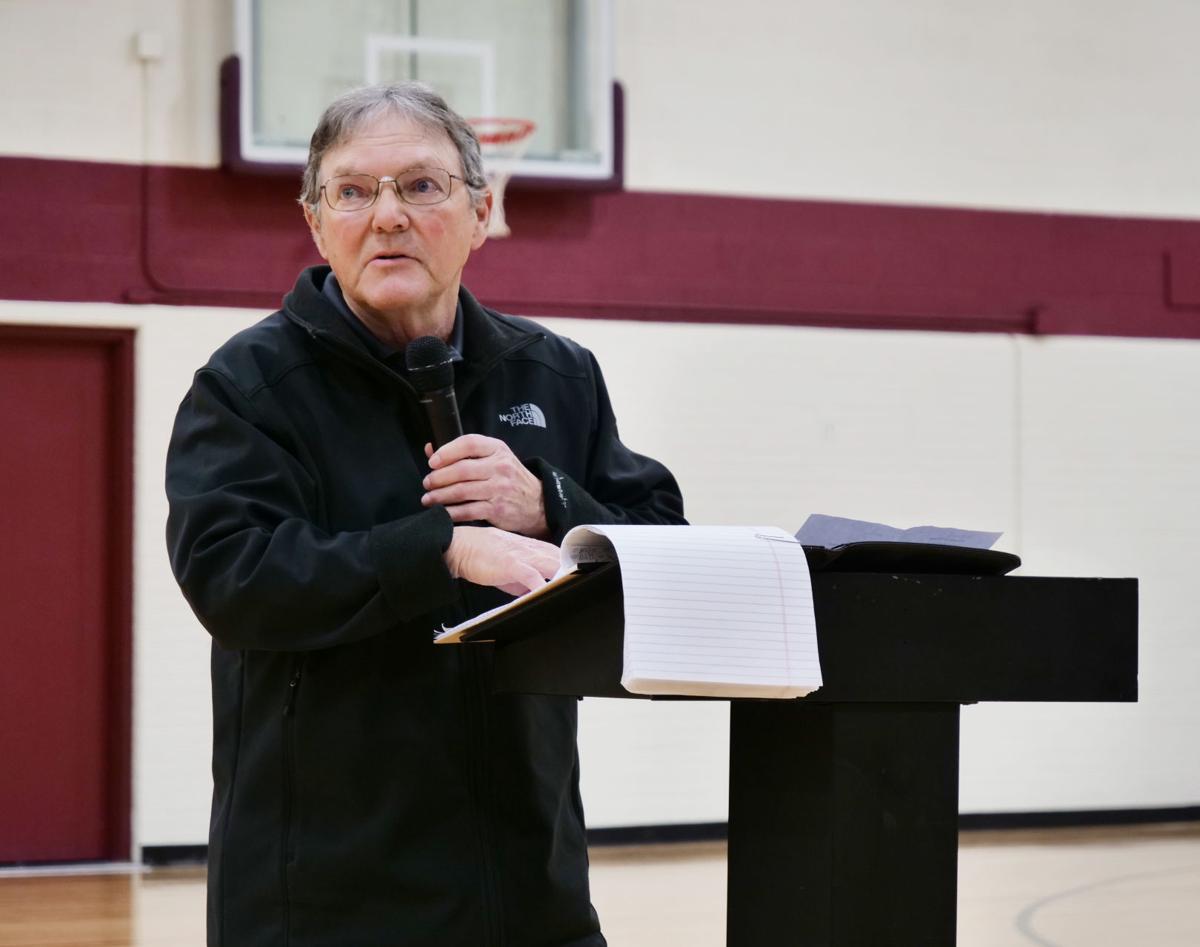 Leon Lutkemeier, board of education president, delivers a thank you speech to the people attending a Silver Lake Elementary open house in Bladen Thursday evening.

“I’m so glad my grandkids get to go to a school in a new building,” she said.

Silver Lake Public Schools finished its new elementary school in December 2019. On Thursday evening, the school had an open house to let residents see the rapidly completed building. More than 100 people showed up.

The open house brought back memories for many of the visitors who had attended school in the old building that was erected in 1924. Instead of feeling sad to see the building gone, many appreciated the opportunity to see the future of education for students in the Silver Lake district, which serves the Bladen, Roseland, Holstein and Campbell communities. (Classes for the older grades meet in Roseland.)

“A lot of times when you talk about tearing down a school that the older generation graduated from and went to all their life, they’re kind of leary about it because they hate to see the old go,” said Principal Duane Arntt. “It’s good to see those people come out and support.”

Less than a year ago, the district didn’t know if it would even have a new building.

In February 2019, voters in the school district elected to pass a $3.8 million bond to tear down the old elementary building and build a new one. Roughly 82% of the about 600 votes cast approved the bond. Two million dollars came from a special building fund.

Two months after the vote, students spent their last day in the old building before finishing the school year in temporary classrooms at the Webster County Fairgrounds, about two blocks from the school, and at the Bladen United Methodist Church. The three-story building was razed shortly thereafter, with only the newer gymnasium spared.

Over the summer of 2019, Ayars and Ayars Inc., based in Lincoln, worked around a wet summer while building up the new school. The construction company finished phase one of the building — opening up half the school to students — two weeks ahead of schedule.

Students attended class for the fall semester in half the building while construction continued.

In early December, Ayars and Ayars finished the second phase — ahead of schedule again — and opened the entire building for use. Students and teachers have been in their permanent rooms since then.

But one of the biggest improvements for the school is that is is complies with the Americans with Disabilities Act, because the building is one story. The old building was three stories, and students in wheelchairs had to use a large machine referred to as the “climber” to move between levels. The climber would take 15 minutes to move from the bottom floor to the top floor.

“It’s nothing compared to the old school,” Principal Duane Arntt said. “We love it. Kids love it.”

Dan and Debbie Albers were at the open house. Dan, who is pastor of the United Methodist Churches in Blue Hill and Bladen, opened up the Bladen church for the school to use while the new building was under construction.

The Alberses said they were impressed with how quickly the building was built and they are glad to see the school stay in Bladen.