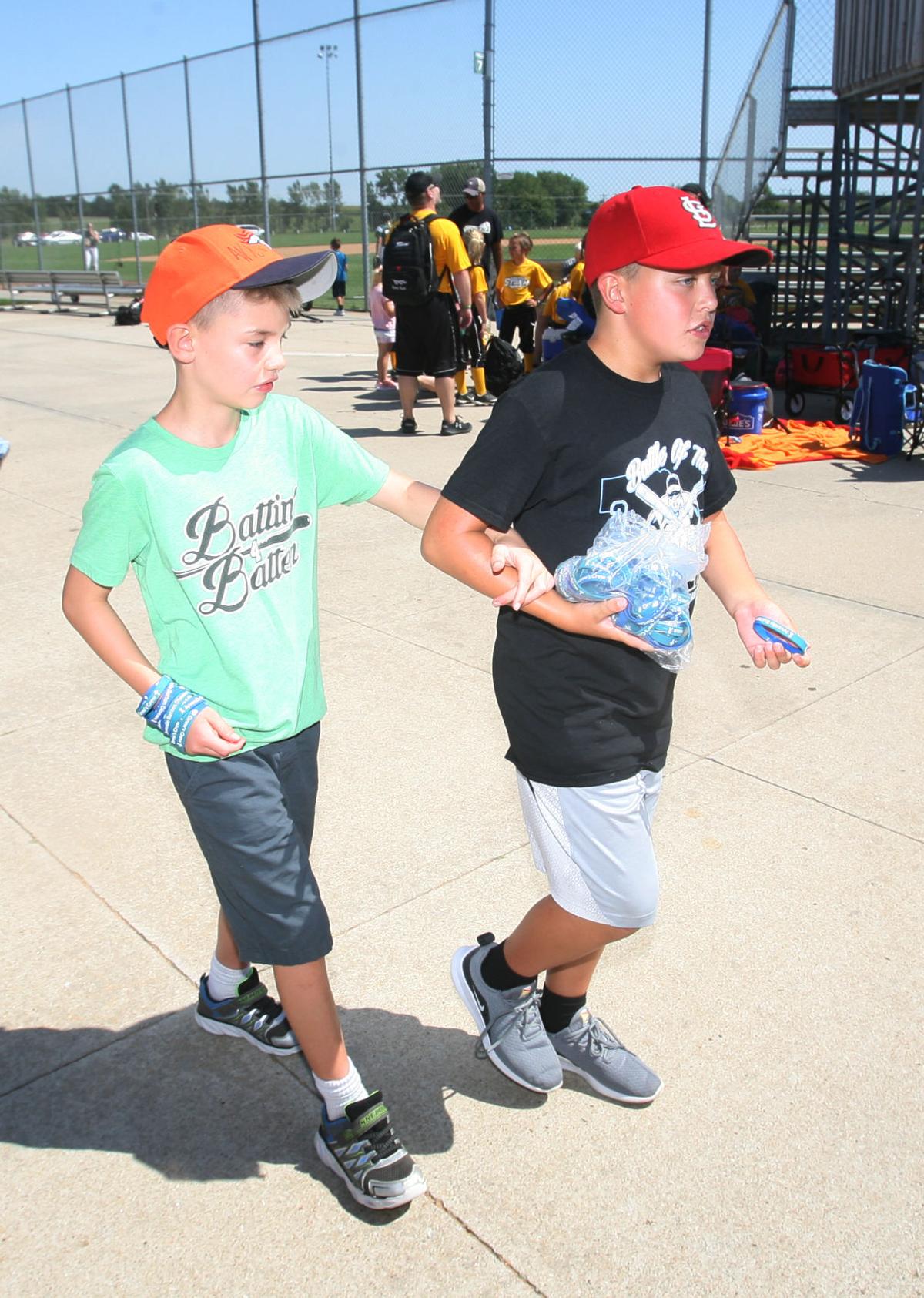 Drew Sillman (left) is led around Smith Softball Complex by Jake Heard as they hand out bracelets to raise awareness of Batten Disease Saturday. 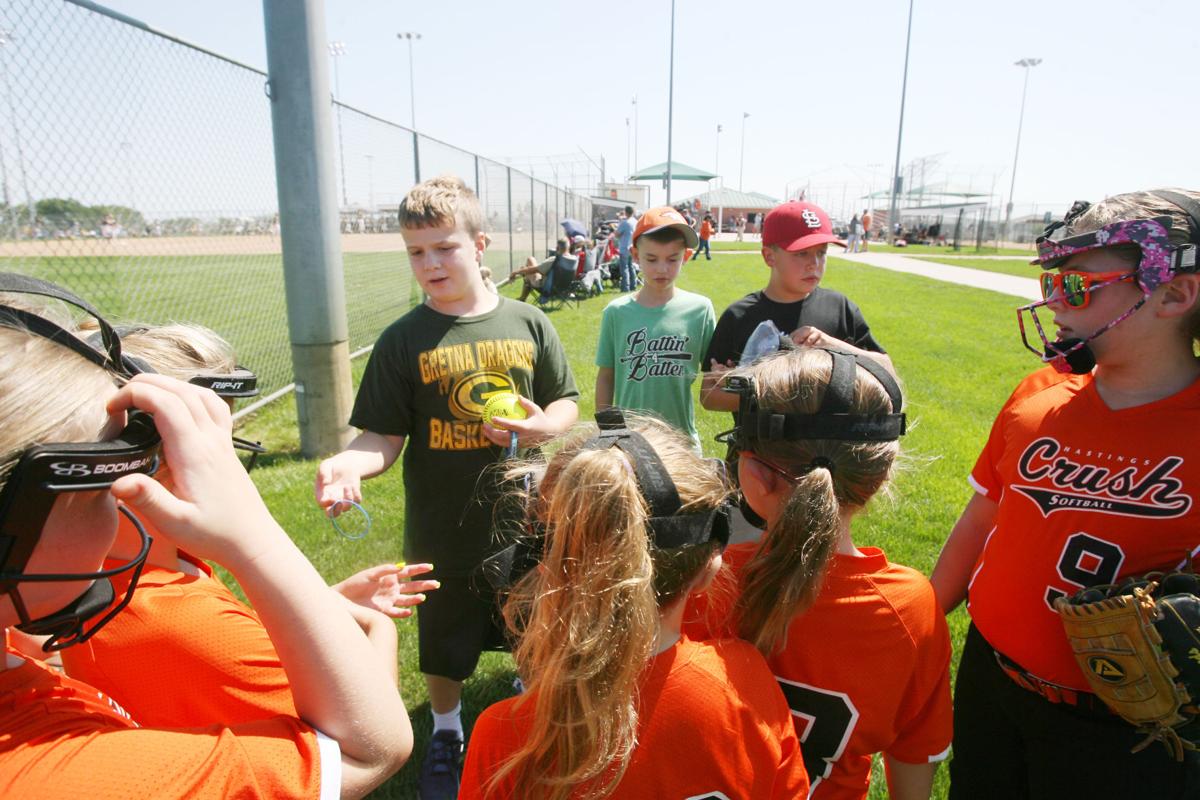 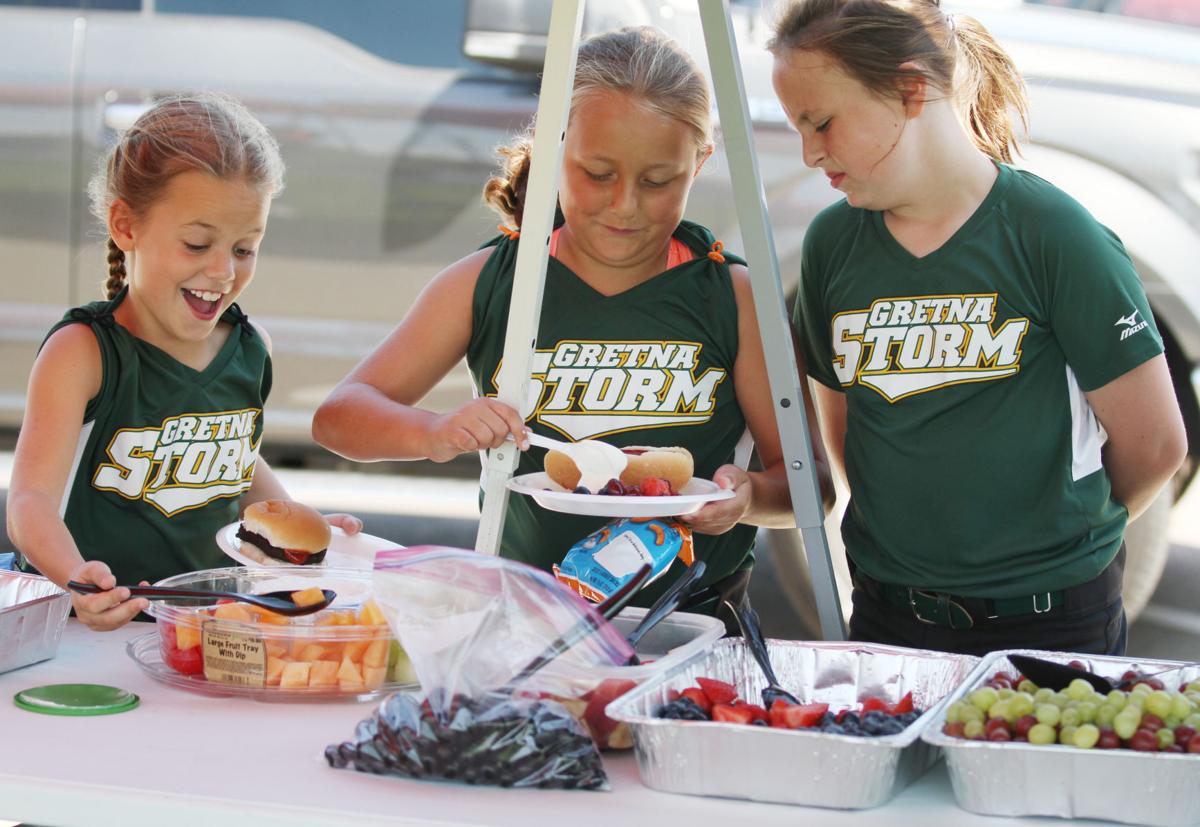 Drew Sillman (left) is led around Smith Softball Complex by Jake Heard as they hand out bracelets to raise awareness of Batten Disease Saturday.

When Drew Sillman began to show signs of poor vision at age 5, his parents Michael and Cara assumed he needed glasses. If only it were that simple.

Testing uncovered what the underlying problem was — a disease so horrific that it cost the young boy his sight by age 6.

The rare but devastating disease mimics symptoms of Alzheimer’s, Parkinson’s and ALS (Lou Gehrig’s Disease), continually attacking its victims throughout their teen years. A clinical trial to combat the disease is months away, but treatment will be costly. And that’s where the communities of Gretna and Hastings enter the picture.

High school and summer softball programs from both communities met in a first-ever NSAA jamboree scrimmage at Smith Softball Complex Saturday to help raise money and awareness of the disease. The event, Batten 4 Drew, included softball played on four diamonds and a free-will barbecue luncheon, with proceeds going to the Sillman family to be used to help offset costs of the experimental trial treatments for Drew and other children battling the disease.

An estimated 600 people turned out on Saturday to pack the complex parking lot, with many of them taking part in the free-will luncheon fundraiser.

Heard’s son also plays with Drew’s older brother Colton on a summer team for 10-year-olds coached by Michael Sillman, a former pitcher for the University of Nebraska Husker baseball team who played four seasons in the St. Louis Cardinals organization.

Heard pitched the idea to Theoharis, who in turn, presented it to his team for consideration. The resounding yes from the squad set the wheels in motion for what turned out to be a perfect day for softball and pulled pork sandwiches.

“Wow! (It is) a really good turnout (and) amazing that so many people are learning about Battens Disease and Drew and our story,” Cara Sillman said. “We’re just really excited and thankful that people care that much to help support Drew.”

Accompanied by two friends, Drew spent the better part of the tournament doling out rubber bracelets to supporters that contained such messages as “Juvenile Batten Disease” and “Drew’s Crew.”

A diehard baseball fan, Drew reportedly crushes the ball himself when hitting off a tee playing in the Miracle League for children of all disabilities. On this day, he had little to say as he busied himself collecting bracelets and dog tags to hand out to spectators in the stands.

Situated in covered blue chairs on the first base side of the diamond, Michael Sillman said he and the family were humbled by the tremendous support shown for his son by the event.

“Oh man, incredible!” Michael said. “We’re overwhelmed with the amount of support we’ve received. It’s turned out to be a great day at the park with so many people here in support, and a great game to watch, too!

“Coach Bill and Drew have a pretty special bond. Drew knows Coach Bill’s voice anywhere he’s at, and he’s always listening for it. Bill came to us and said, ‘Hey would you be open to this?’ and we said, ‘Yeah, 100 percent!’ We feel blessed that we had this opportunity and couldn’t really ask for much more.”

Candice Gant, 14, right outfielder on the Hastings Tigers junior varsity team, was one of several players manning the concession stand at the fundraiser barbecue.

“It’s for a good cause,” Gant said. “It feels like I’m doing the right thing.”

Teammate and fellow outfielder Rachel Johnson, 14, said she was glad to lend a hand to help further the search for a cure. She said that in an event like this, everyone takes something positive away from the experience.

“We all learn something from today,” she said. “Giving back is the right thing to do, to help people out in need.”