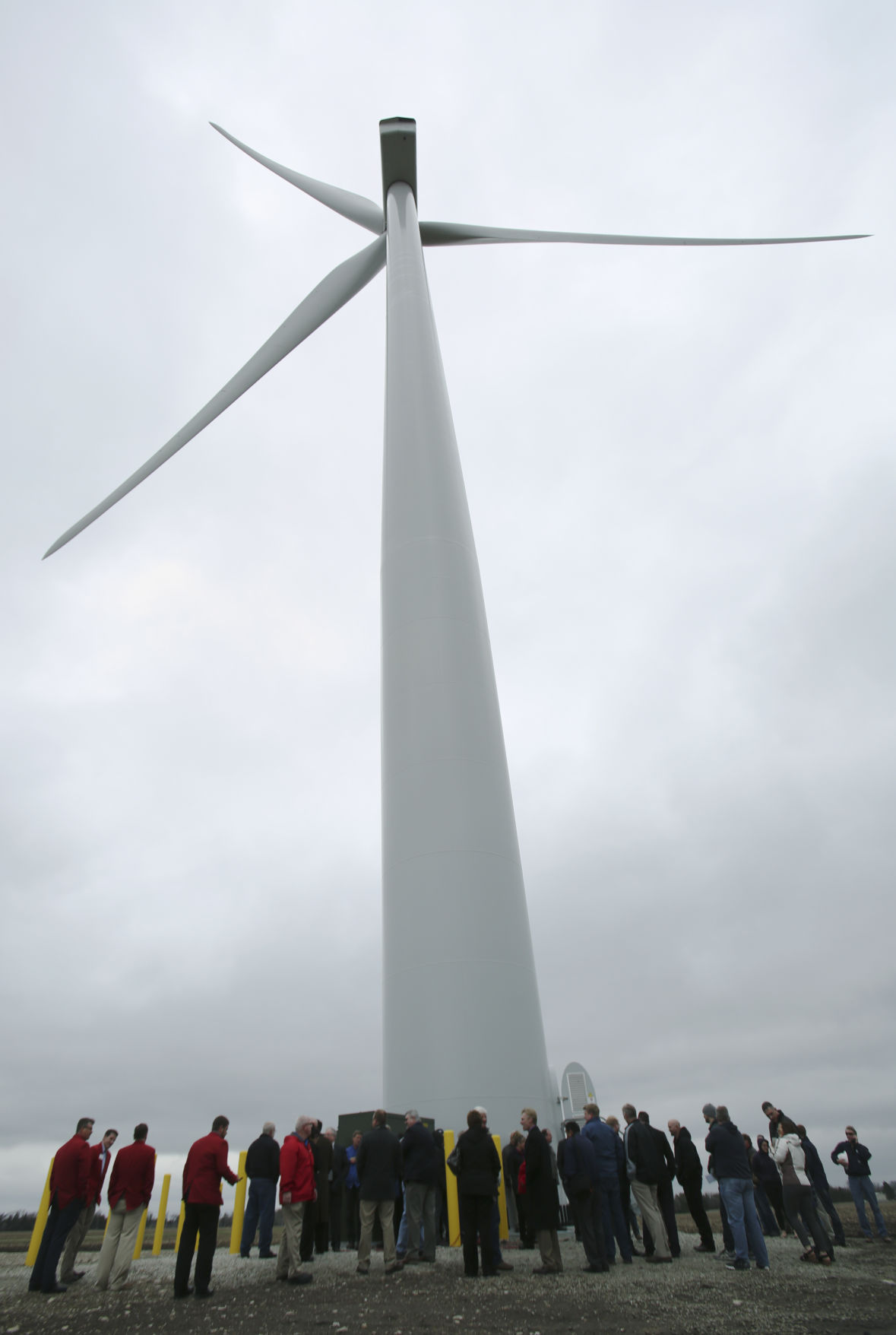 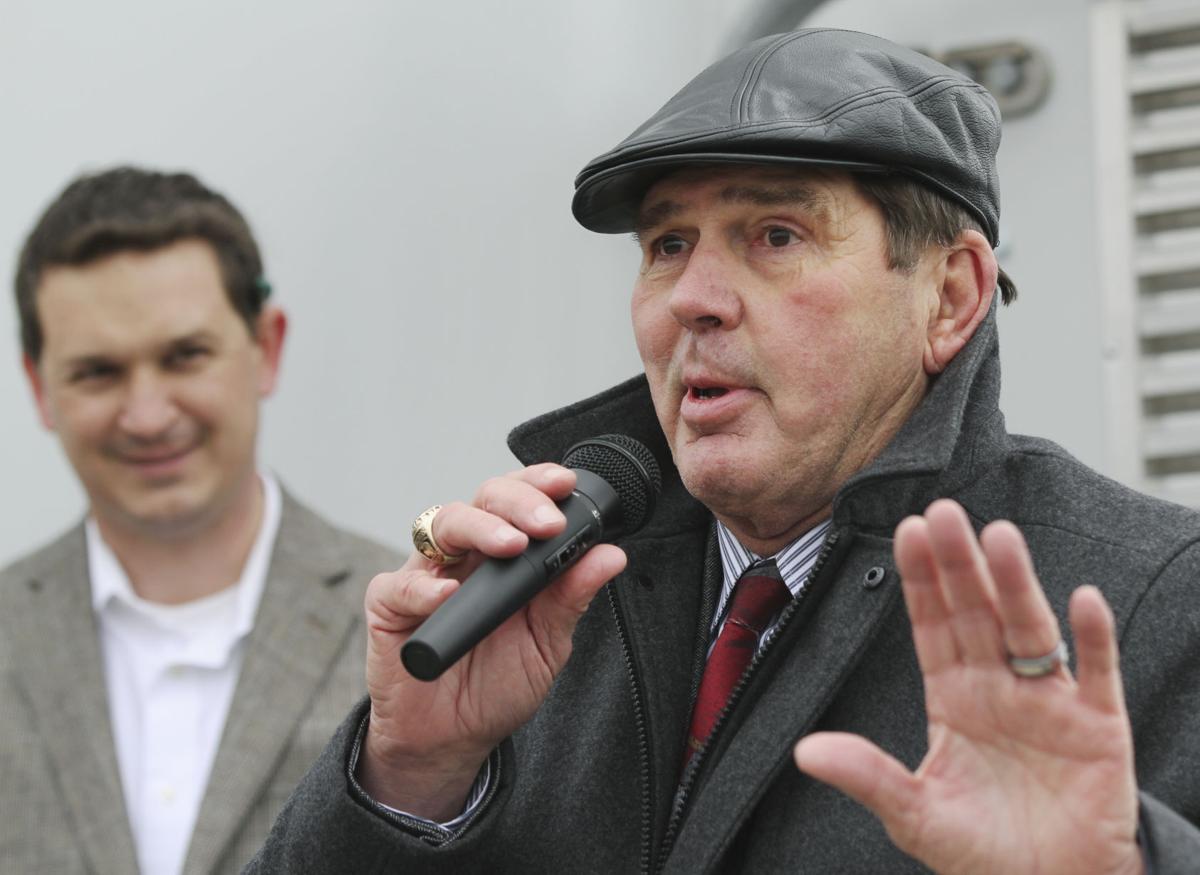 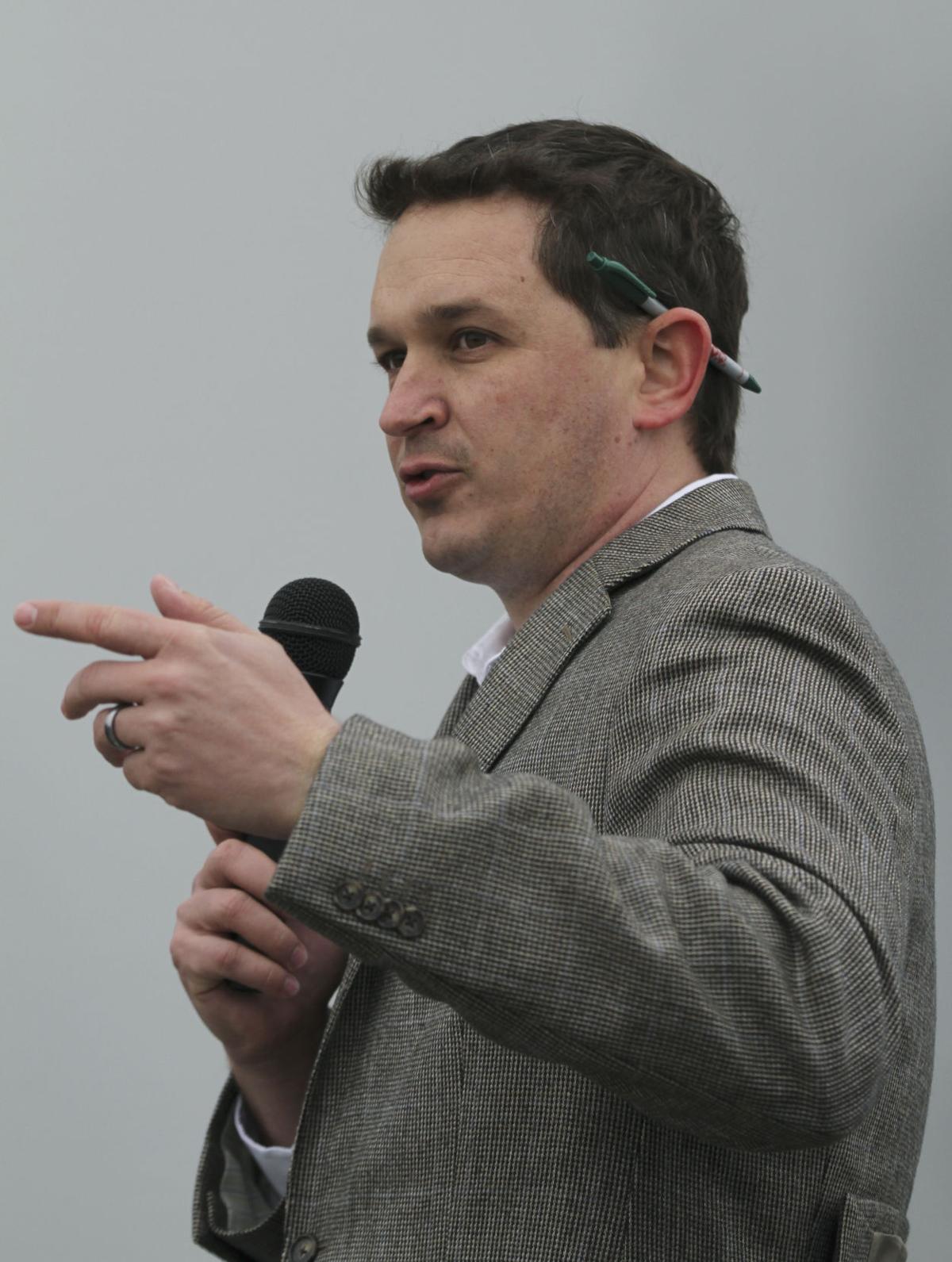 Tom Hastings gave a warm welcome at the Central Community College-Hastings wind turbine ribbon cutting Thursday afternoon as several dozen people shivered around the base of the 432-foot structure.

“What a great turnout on a nice, warm day,” the president of the Hastings Area Chamber of Commerce joked to the crowd.

The project includes a 1.7-megawatt General Electric turbine southwest of the CCC campus. The turbine stands 432 feet tall at the tip of a blade, and is interconnected directly into Hastings Utilities’ subtransmission system with all of the electricity being used locally. The turbine came online at the beginning of 2017.

The turbine’s blades cut through the air Thursday afternoon as members of the public walked around inside the base of the turbine, looking up at the 260 ladder steps to the top.

The structure is owned and operated by Omaha-based Bluestem Energy Solutions as part of a public-private partnership between Bluestem, the college and Hastings Utilities.

“It’s meeting expectations, and I believe it’s provided a great amount of energy to the college,” he said. “We really feel this project has been a win for all parties involved.”

He said the project cost between $3.5 and $4 million. Because Bluestem owns the turbine and not the college it will contribute to the Adams County tax base over the life of the project — about 25 years.

Citing Don Cox, HU director of marketing and energy supply, CCC Campus President Bill Hitesman said that the turbine has provided the college with 100 percent of its electricity through two complete months.

Cox reported at a Hastings Board of Public Works meeting in February that in January the turbine generated 537 megawatts, which is enough to power 646 homes based on an 830-kilowatt average residential monthly consumption.

Even the small speaker used to broadcast remarks by speakers at the ribbon cutting Thursday was powered by the turbine plugged into a nearby generator.

CCC officials began talking with Bluestem about a wind turbine project around two years ago as part of CCC’s involvement in the American College and University Presidents’ Climate Commitment, an effort to address global warming by creating a network of colleges and universities that have committed to neutralize their greenhouse gas emissions and accelerate the research and educational efforts of higher education to equip society to re-stabilize the earth’s climate.

Hitesman said CCC is in the process of putting together a wind energy curriculum, which looks now to be up and running by fall 2018.

Students and faculty would have access with Bluestem, which will maintain the turbine.

The plan is to make the turbine part of the college’s alternative energy program, which also includes solar panel and geothermal technologies.

Hitesman said he was pleased to see such a large crowd on such a cold day, comprised of everyone from college, city and local business representatives to individuals from Bluestem and Omaha contractor Boyd Jones.

“I think it just shows people have a very vested interest in what’s happening both at the college and in our community and are also very interested to see what the technology can do when you look at alternative energy sources,” he said.

A planned addition to the curriculum at Central Community College-Hastings stands 432 feet tall.