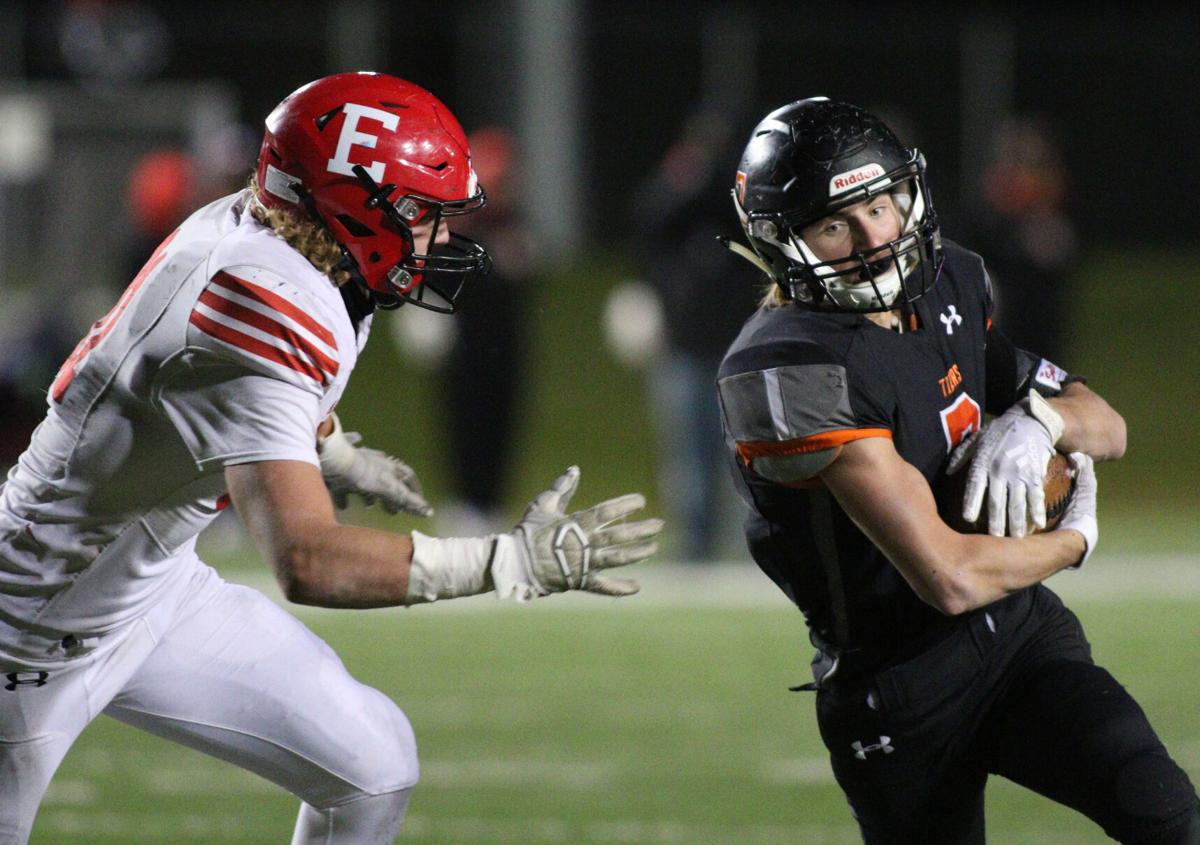 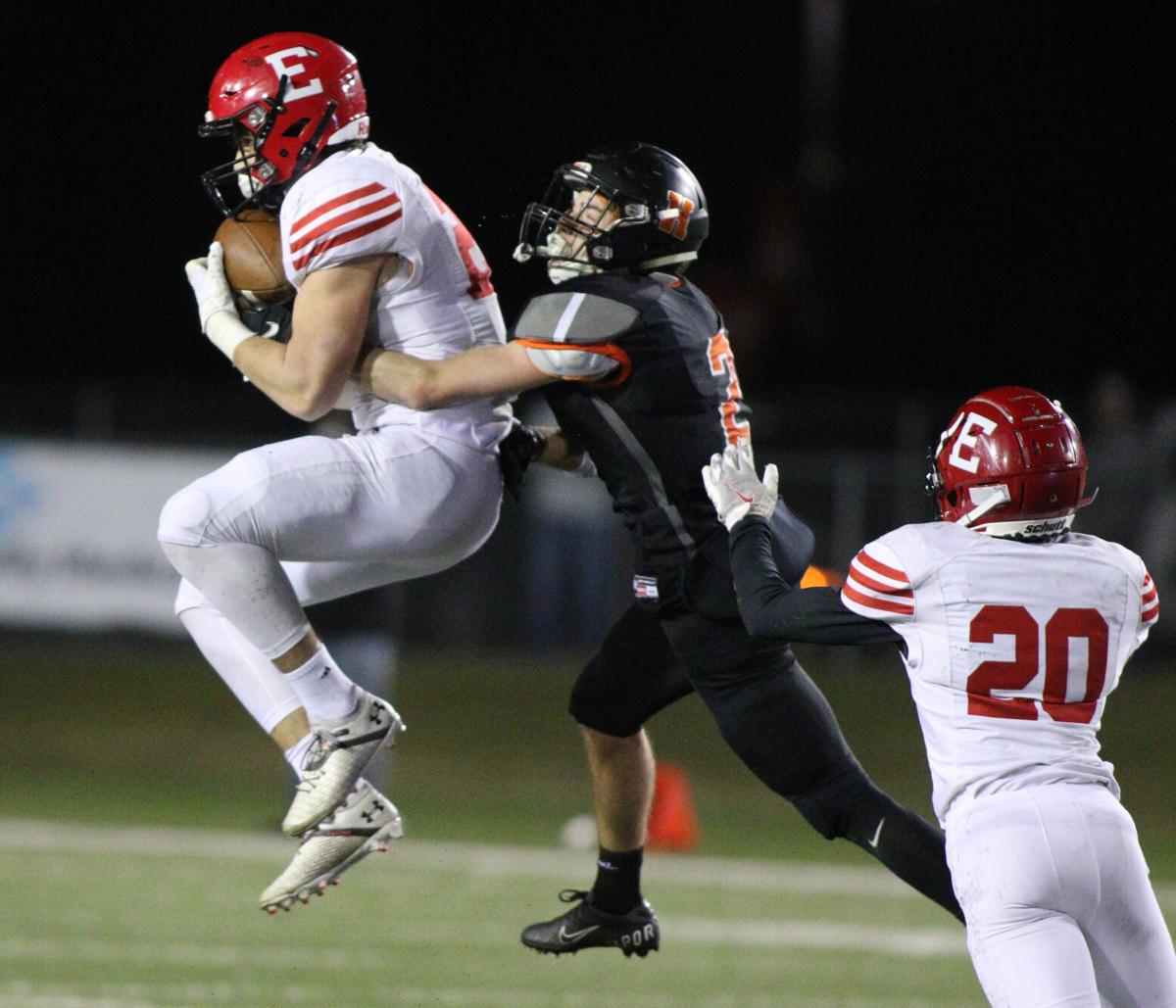 Elkhorn’s Hayden Stec intercepts a pass intended for Hastings’ Austin Nauert in the final minute of their Class B semifinal game Friday at Lloyd Wilson Field. 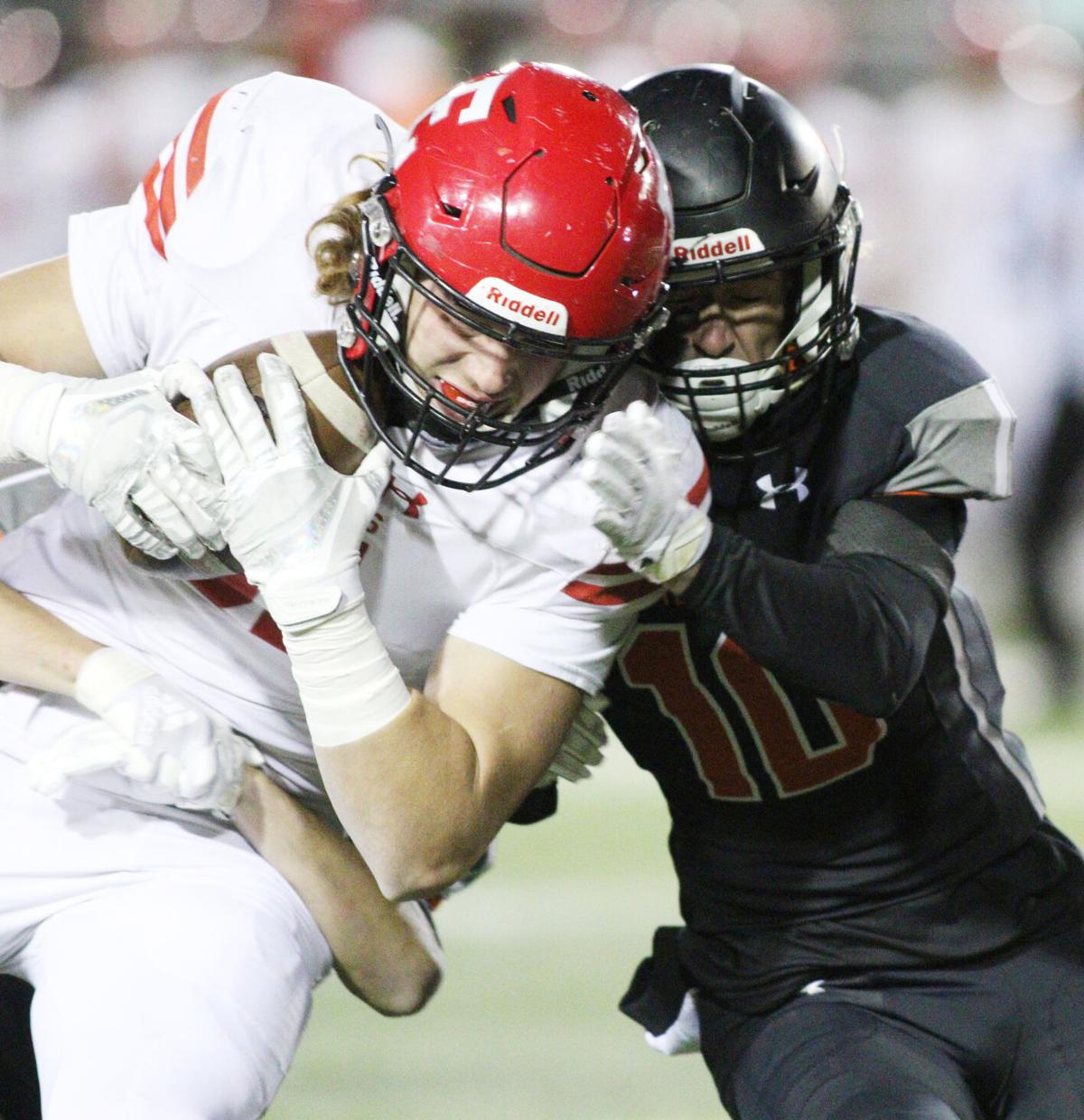 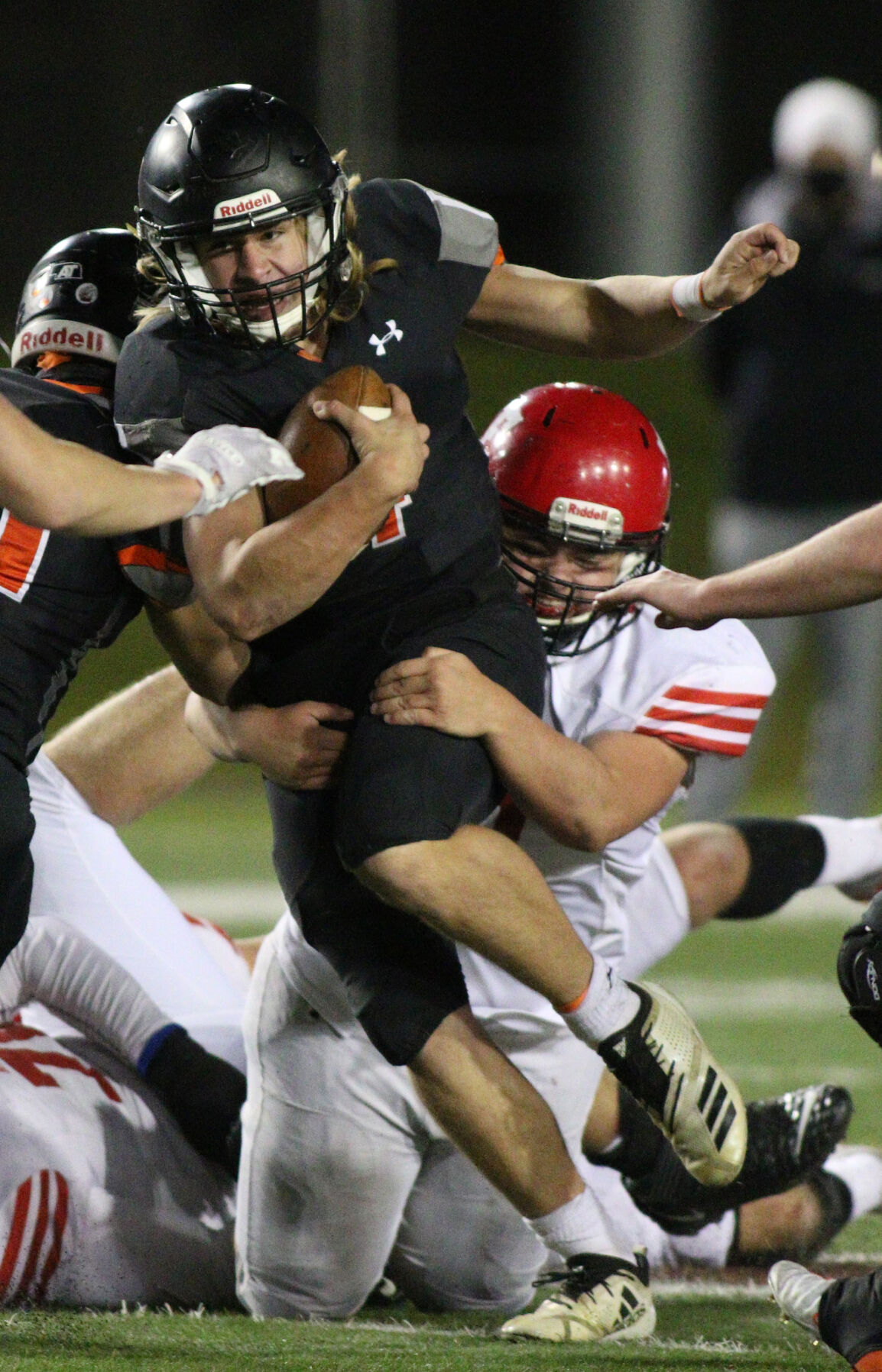 Hastings’ Jarrett Synek is tackled by Elkhorn’s Liam Fairbanks during their Class B semifinal game Friday at Lloyd Wilson Field. 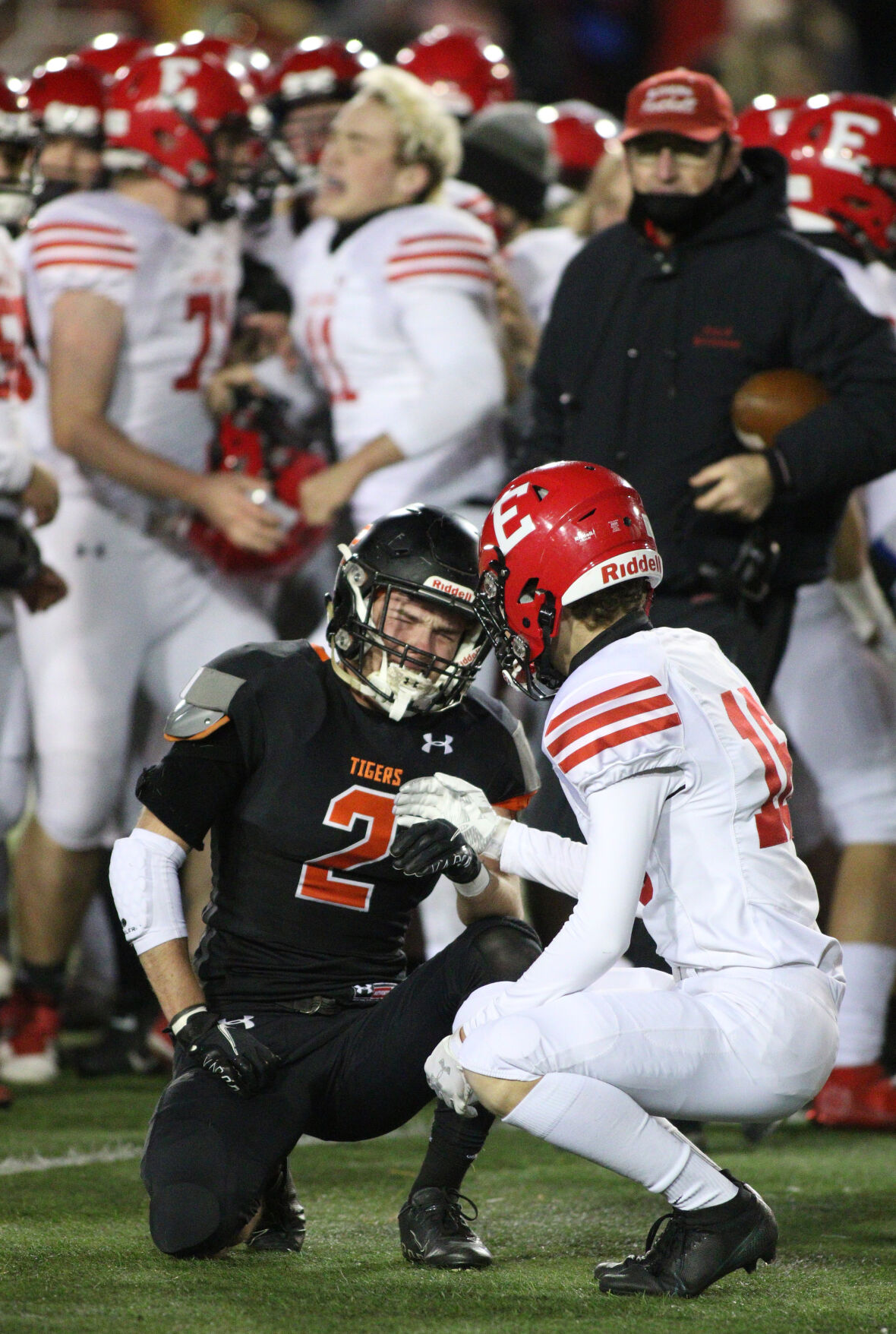 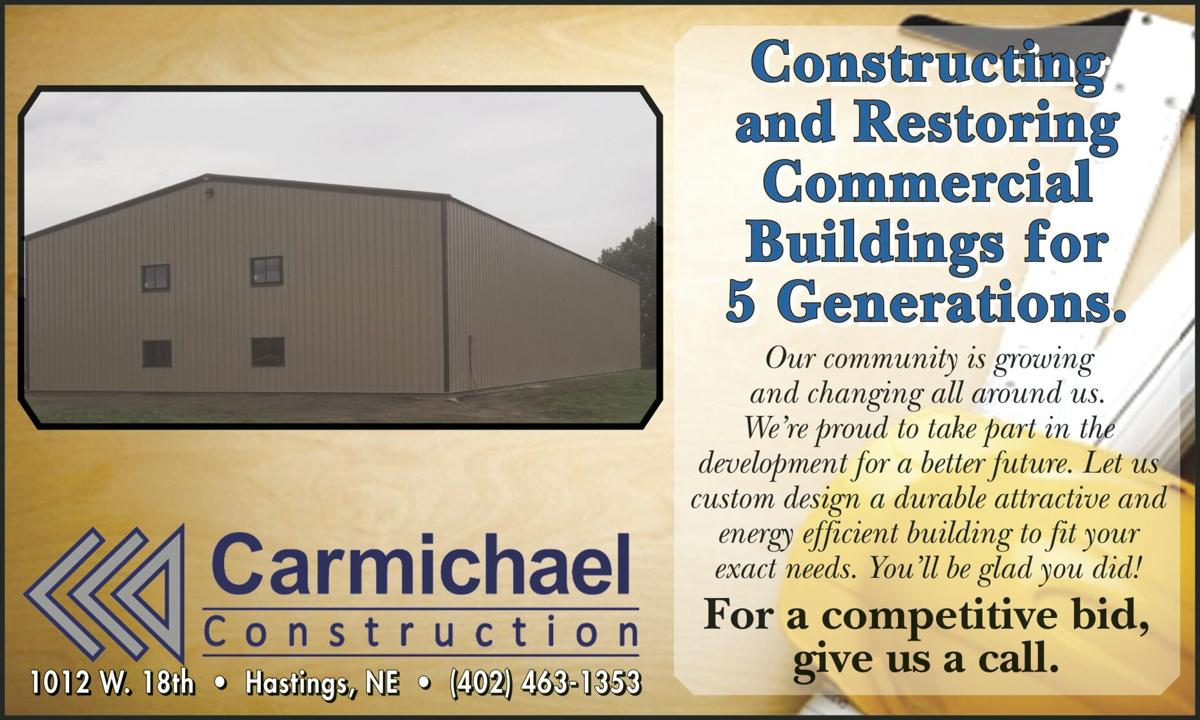 Elkhorn’s Hayden Stec intercepts a pass intended for Hastings’ Austin Nauert in the final minute of their Class B semifinal game Friday at Lloyd Wilson Field.

How quickly cheers can turn into tears.

Late in the game, Hastings cheered in celebration as it took a one-point lead over Elkhorn.

Now, if the Tigers could just hold off the potent Antlers’ offense one final time, HHS would be going into the Class B championship game for the first time in 26 years.

Moments later, however, Elkhorn scored the winning touchdown to secure its place in the title game Nov. 20.

Understandably, the Tigers felt the heartbreak of losing 33-28 and with so much riding on the game.

The game’s closing moments were not for the faint-hearted.

In a game that went back and forth, Hastings took its final lead when Braden Kalvelage caught a 26-yard touchdown pass from Jarrett Synek with 2:11 left. Breyer Menke’s extra-point kick put HHS ahead 28-27.

The Tiger TD did not seem to phase Elkhorn, as the Antlers negotiated their offense down the field for a 26-yard touchdown pass with 59 seconds to go.

The Tigers had one last crack at trying to make a miracle finish. But Elkhorn ended it with a pass interception near midfield. The Antlers ran out the clock.

The game’s dream-shattering conclusion shouldn’t take away from the Tigers’ accomplishments in a season that will be talked about with pride for many years to come.

“The kids fought so hard in all phases of the game. I’m just proud of them,” said Tiger coach Charlie Shoemaker after the game that ended Hastings’ 9-2 season that included owning the No. 1 ranking for weeks, and came a whisker away from a title-game appearance.

“They are going to look back, and they are going to be really proud of their season. And hopefully it is something for our younger kids to understand. That this is where you want to be all the time. Hopefully that is the standard we’ve set,” Shoemaker said.

Elkhorn got its last possession with good field position, also.

“Both teams made mistakes but both teams buckled down. Both teams made plays, and (Elkhorn) made the play at the right time near the end of the game and we didn’t at the end,” Shoemaker said. “I knew it was going to be tight. Our defense played a whale of a game. Offensively we had some struggles but when we got going we were clicking and moving right down the field, scoring in a couple of minutes.”

Elkhorn’s size at the receiver positions put stress on the smaller Tiger defensive backs. The Antlers’ receiving corps has several players who are at least 6 feet, 3 inches.

Gragert is one of them.

On his winning touchdown catch, Gragert out-jumped a Tiger defender and pulled down the pigskin into his chest.

“You saw their size,” Shoemaker said. “Their skill size was really difficult. Their quarterback was kind of a difference maker, scrambling in the pocket. He’s a good athlete. He gets overshadowed with some of the guys they have. I knew at some time he’d get out of the pocket and make a couple of plays.”

The game featured big plays, including a 66-yard touchdown pass from Synek to Kalvelage on the Tigers’ very first play. Menke booted his first of four conversion kicks.

Later in the first quarter, Beau Dreher picked up a fumble and raced 40 yards into the touchdown as HHS took a 14-7 lead.

But on the final play of the first period, the Antlers knotted the score at 14-14 on a 5-yard TD run and extra point.

After a scoreless second period, Elkhorn hurt Hastings with a 53-yard touchdown burst up the middle by the Antlers’ top running back, Aiden Young. Once he got into the second tier of the Tiger defense, there was no stopping him.

The Tigers evened the score at 21-21 as Zaide Weidner rambled for a seven-yard touchdown run.

Elkhorn took the lead right back with a 12-yard touchdown run. The extra point was blocked by Nauert. The Antlers owned a 27-21 advantage.

Elkhorn will meet Aurora for the state title game. The contest will be played at Elkhorn.