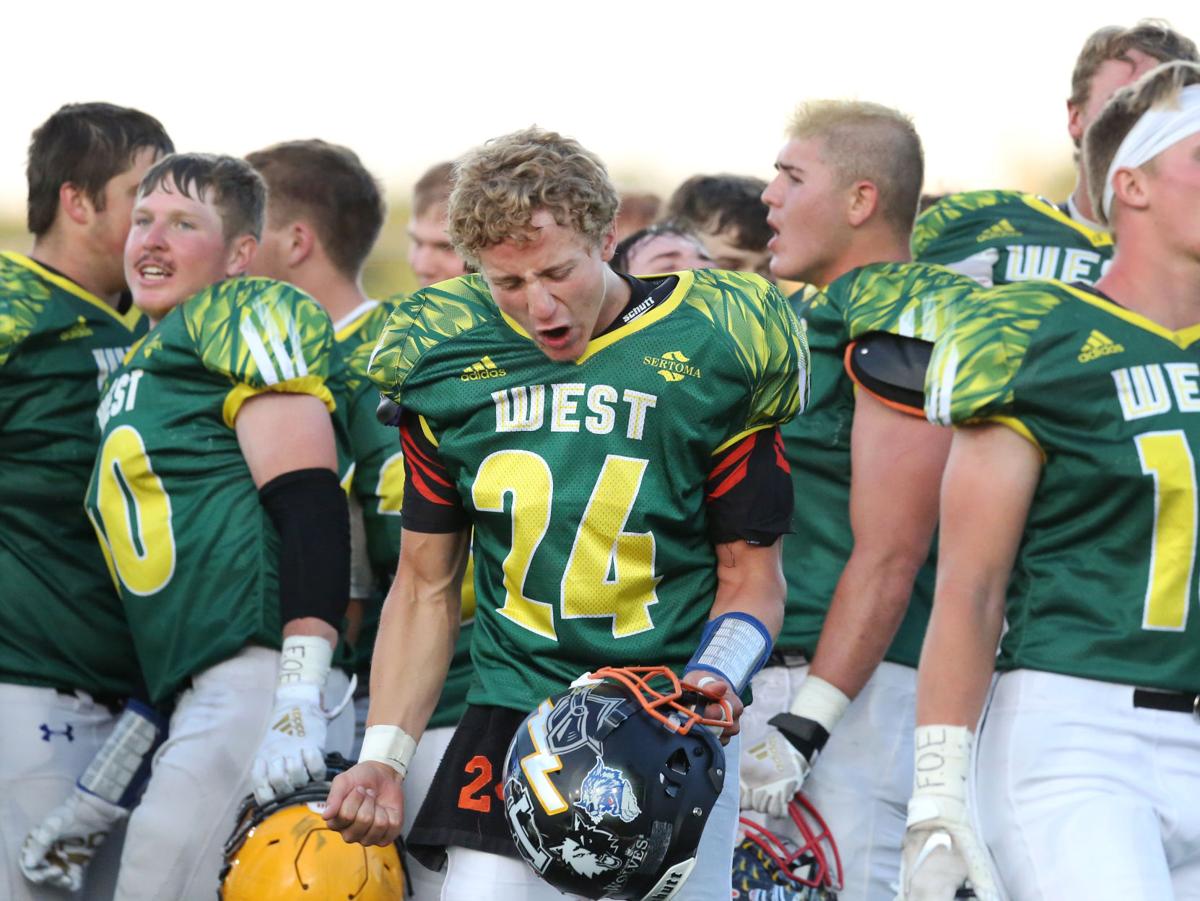 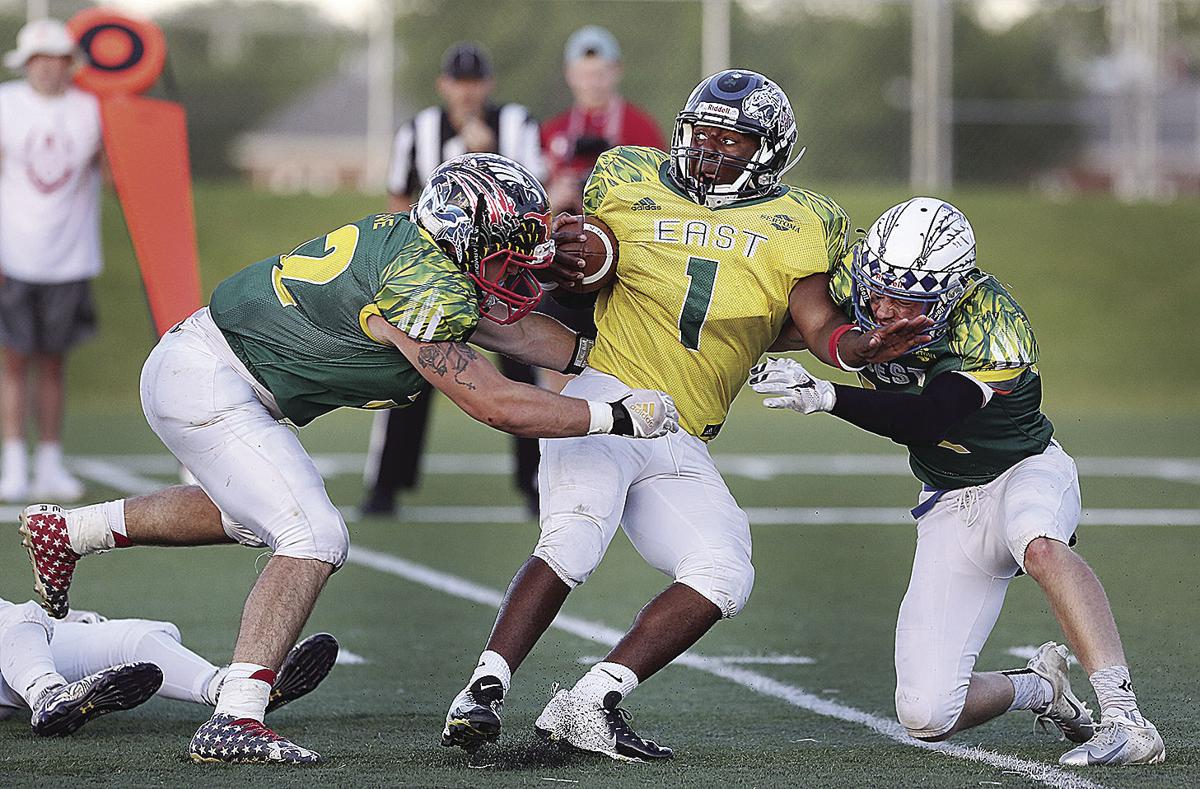 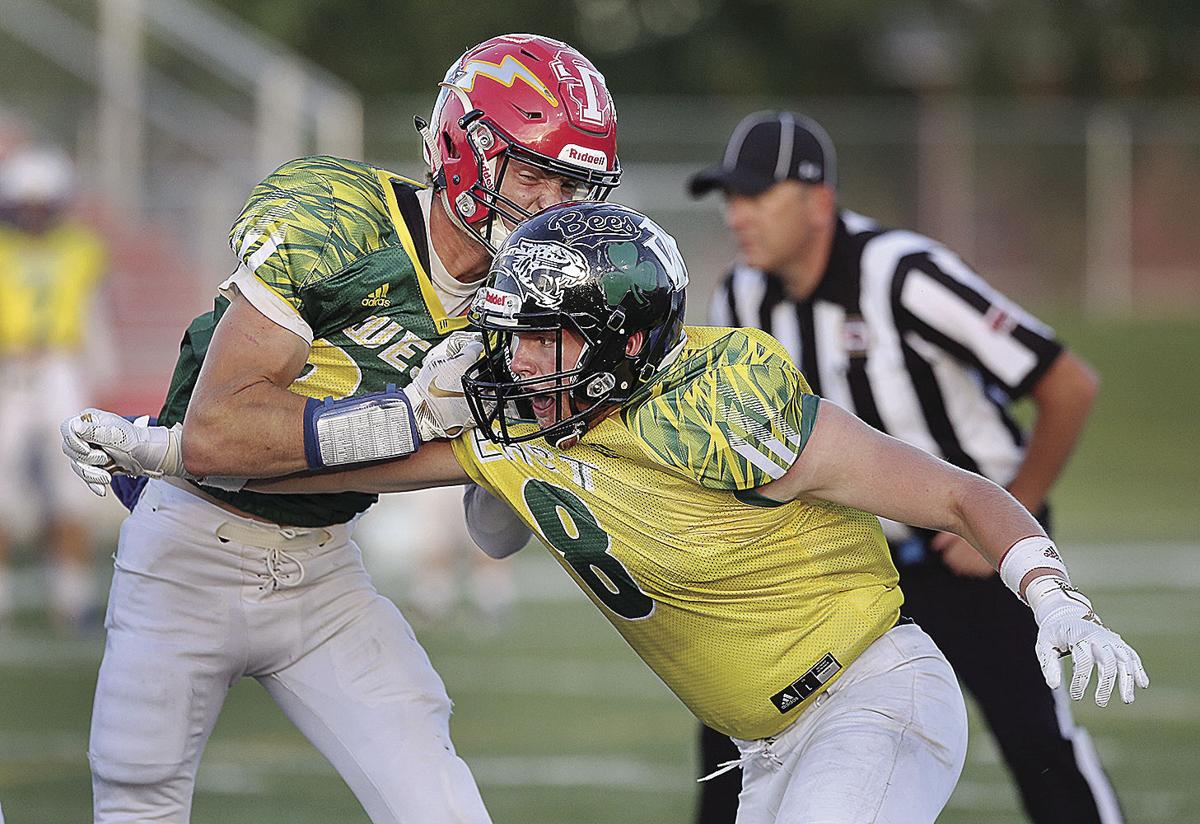 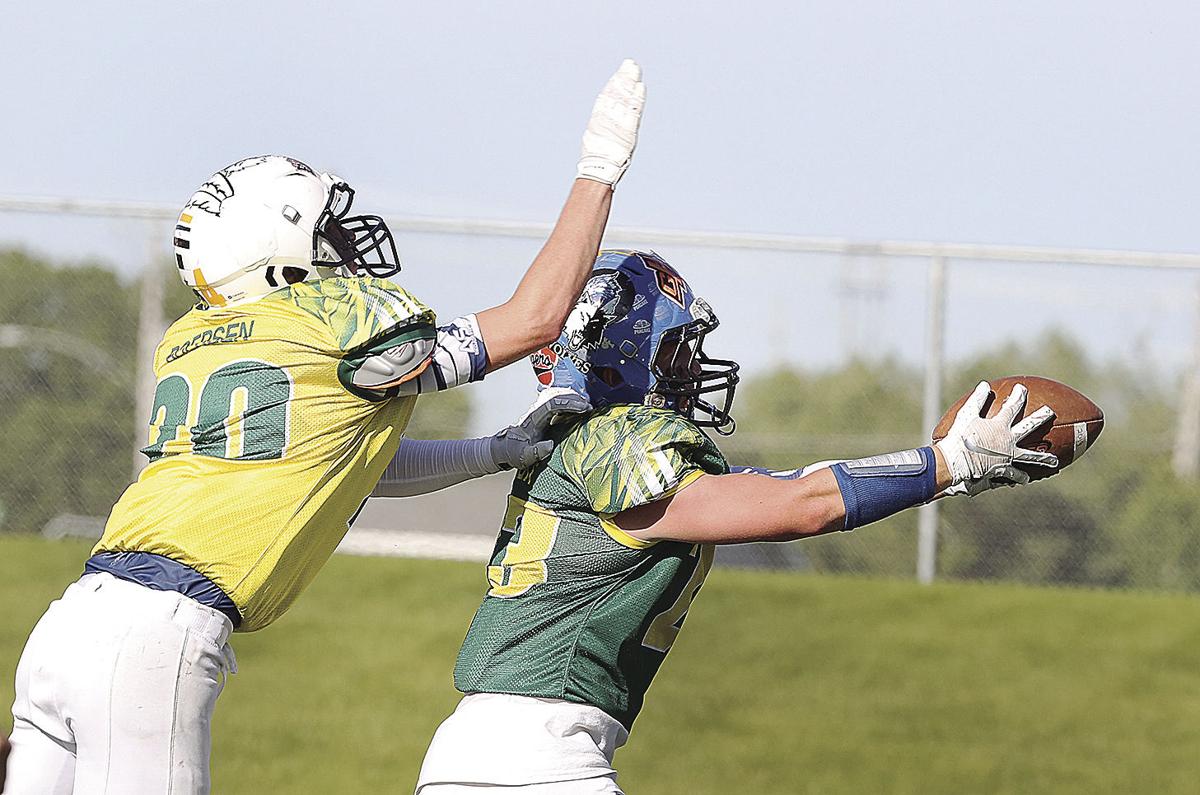 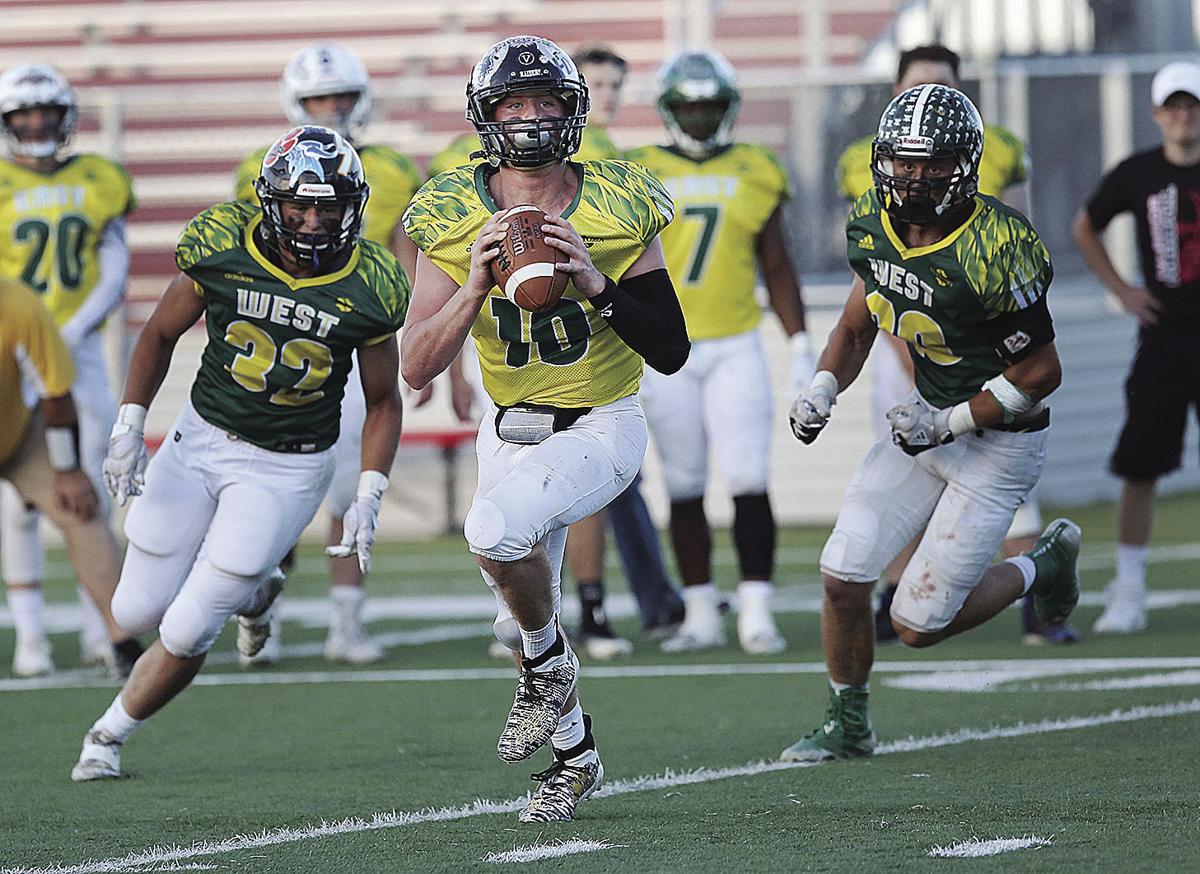 Last year, Giltner’s Dayne Hinrichs watched as his cousin, Josh, take part in the Sertoma 8-man All-Star Game and score a touchdown in the contest. Once Dayne found out he was selected to play in this year’s, he bet Josh he would double his touchdown total.

Dayne not only tripled Josh’s total TDs, but he could have had even more if not for some dropped passes.

Hinrichs was named offensive MVP as he threw for 113 yards and three scores, leading the West to a 34-22 victory in the 42nd Sertoma game.

“Coming in, I didn’t think I’d be able to run this offense. Coach (Steve) Neptune put in a great offense, very sophisticated, and to come out here and put up 34 points, I’m super proud of all my guys. Even the ones that dropped some of the balls,” Hinrichs said with a smile.

Hinrichs’ first touchdown throw came in the first quarter, after the West had already scored twice. The West faced a 3rd-and-11 from the East 28-yard line when Hinrichs dropped back for a pass and had all day in the pocket. He scrambled to the right side of the field and found Zac Sweet (Mullen) wide open in the end zone.

The score gave the West an 18-0 advantage over the East.

Kenesaw’s Ryan Denkert got the scoring started for the West. After a long East drive ended with an interception, the West marched down the field to the tune of 15 plays and 88 yards — the all-star event used all 100 yards of Lloyd Wilson Field.

The drive was capped when Chris Kester (Clearwater-Orchard) connected with Denkert, who made a great over the shoulder catch in the end zone.

“He threw it up and I was just trying to run under it,” the Blue Devil said. “I was running with my hands out and head up right behind my back and somehow pulled it in.”

The West went up 12-0 when the East’s snap on a punt sailed over the punter’s head and into the end zone. Gage Haake (Sandhills-Thedford) recovered the ball in the end zone for the touchdown.

It took the East just one play on its ensuing drive to give the ball back to the West, as a fumble led to Hinrichs’ TD pass to Sweet and an 18-0 advantage for the West.

“Our defense really stepped up early on and our offense took advantage of it, which was really nice,” Denkert said.

The East got back in the game, scoring a pair of unanswered touchdowns, one before the half and another on its first drive of the third quarter. Quarterback Drew Bippes, of Falls City Sacred Heart, threw both touchdowns.

With the score trimmed to 18-14, Hinrichs led the West on a 66-yard scoring drive, tossing his second TD of the day, an 11-yard connection with Ty Martinsen (Riverside).

The score made it 26-14, but the East responded on its ensuing drive. Exeter-Milligan/Friend’s Edwen Baptista put the finishing touches on a 4-minute drive, punching it into the end zone on a 5-yard run.

Baptista finished the day with 74 yards of total offense and a score to earn Offensive MVP honors for the East.

“It’s a good way to wrap up the career,” Baptista said. “Once it’s all over, I’ll remember this day for a long time, just my last football game.

“It was fun meeting a lot of friends, telling stories and just bonding this week. The game didn’t really turn out the way we wanted to, but that’s not what was important. What was important is just building friendships that will last forever.”

Baptista’s touchdown brought the West lead back to just four points. The two teams punted on the next four possessions, taking the 26-22 score into the fourth quarter.

On a 3rd-and-6 at the East 19 with less than 4 minutes remaining in the game, Hinrichs threw a pass to Denkert in the end zone, but the Blue Devil had the ball fall out of his hands. It was not the first time a West receiver dropped a pass from Hinrichs with no defender in the area.

But all that bad luck went the other way on Hinrichs’ next pass. The QB dropped back on fourth down and threw the ball to Mullen’s Lane Edis, who had the ball go off his hands and into the hands of a diving Riley Racicky, who came down with the ball in the end zone for a touchdown.

“I threw a little high for Lane Edis, and he tipped it. We did the tip drill all week this week, and Riley came in, swooped in and caught it. It was a special moment,” Hinrichs said.

That TD increased the lead to 34-22 and sealed the victory for the West.

Hinrichs was happy to win MVP honors and record a victory in his final game on the gridiron.

“It’s super humbling to end my football career like this, playing with all these West guys,” he said. “I’ve probably played against maybe two of them and their respective teams, but to come out here and wear my Giltner shoes, my Giltner towel, my Giltner helmet one more time — I did it for Giltner and that special community that supported me through these four years.”

Bruning-Davenport/Shickley’s John Christensen was all over the field on the defensive end for the East. He racked up 16 total tackles and was named Defensive MVP.

“I just knew that I could fly to the ball and I could rely on these guys to hold their spots and be 1/8 of the defense. I did my 1/8 and we just made a lot of plays together,” Christensen said.

Denkert, who had one catch for 20 yards, said he enjoyed his Sertoma experience.

“It’s a pretty amazing experience. It’s pretty sweet because not a lot of people get to do this. It’s a pretty exclusive thing,” he said. “And it’s a lot of fun. These guys are so cool. It’s been a really good week.”

Like many of the other players in the all-star game, Christensen will hang up his spikes and call it an end to his football career. The BDS standout said anyone that has the opportunity to play in a game like the Sertoma contest should take advantage of it.

“It’s the opportunity of a lifetime. For any kid that wants to do it next year, do it. You get brothers, friends out of this for the rest of your life,” Christensen said. “You’ll remember this forever.”

As for Hinrichs, he won the bet with his cousin after tossing three TDs. So, what’s the first thing he planned on saying to Josh?

Lawrence-Nelson's Jacob Sharp rushed for 35 yards for the East, while his high school teammate Lane Heikkinen tallied 29 yards on the ground and 17 through the air. BDS' Jacob Schoenholz also competed for the East team as a lineman.