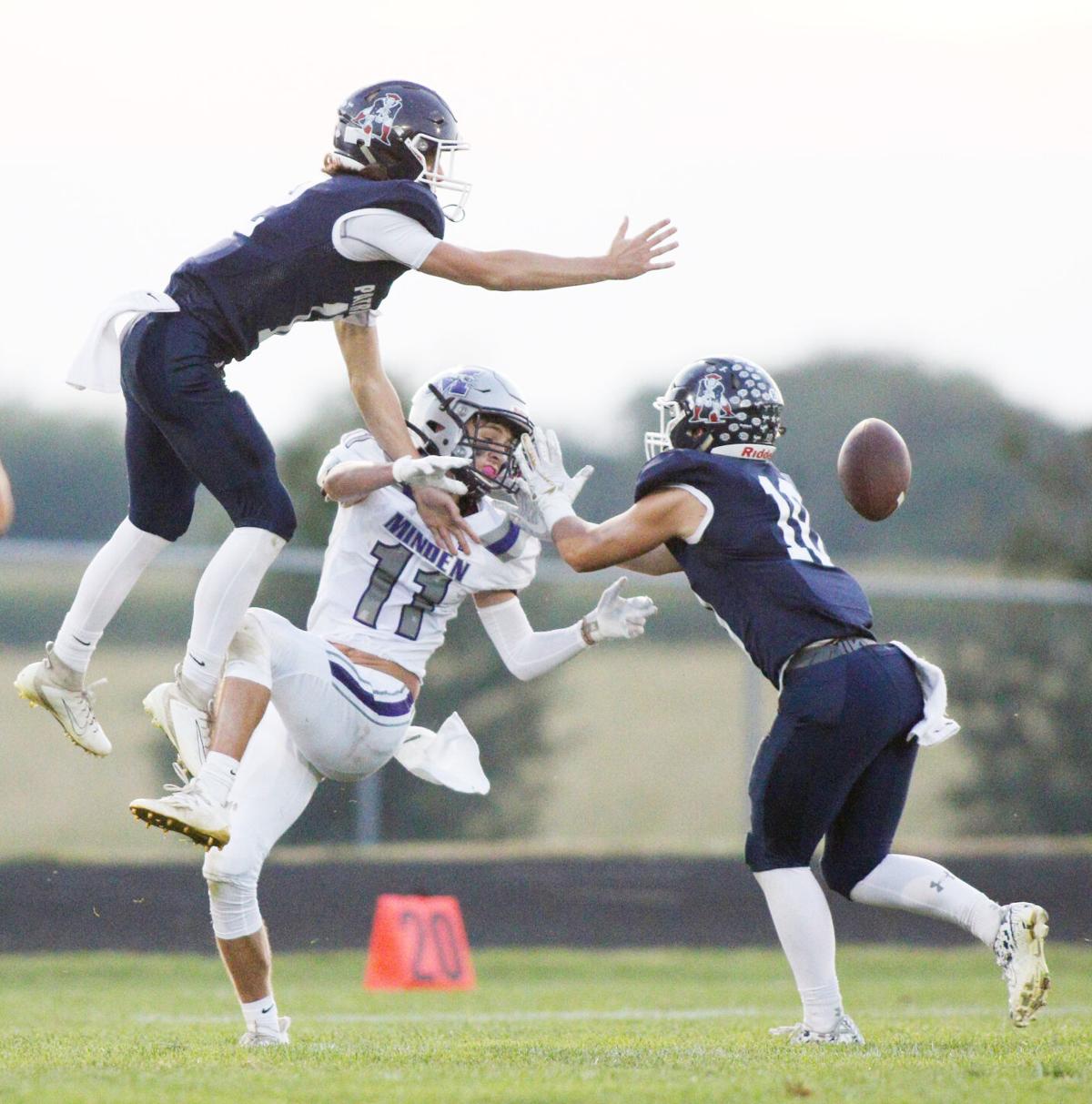 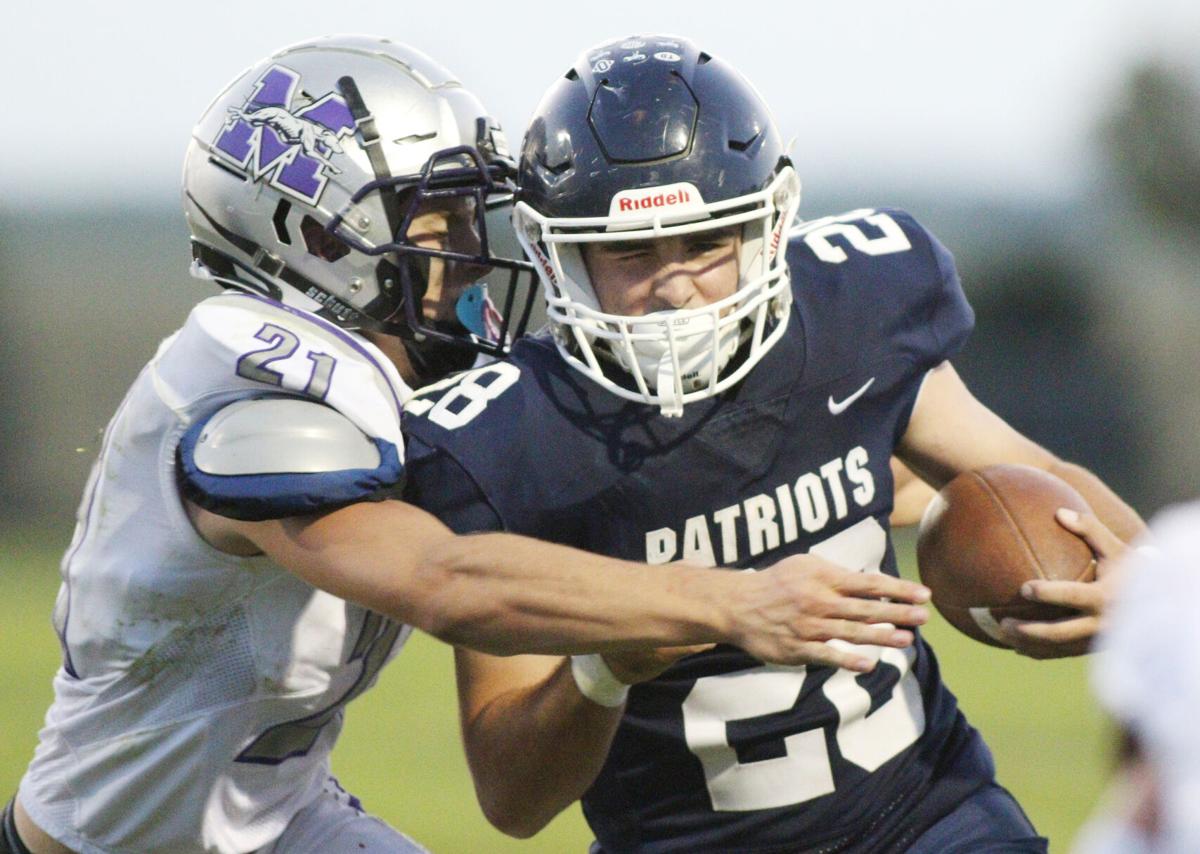 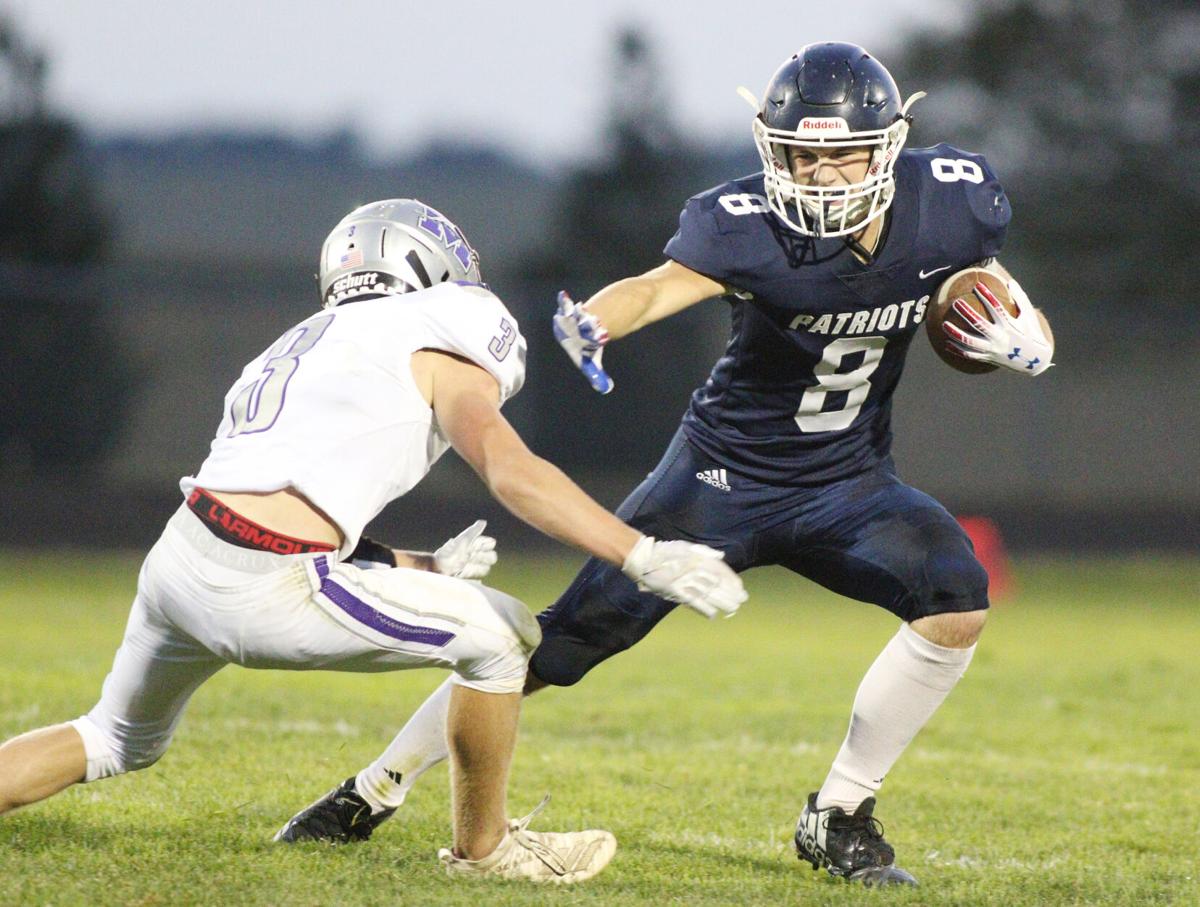 Any doubts faded quickly, as the Patriots took a 9-0 lead two minutes into the AC home game against the Whippets (0-2). And that was before the Patriots ever touched the ball on offense.

AC surprised Minden on the game’s first scrimmage play. That’s when Tyler Slechta stripped the ball away from Whippet running back Gage Fries and burst loose for a 30-yard touchdown. Slechta followed with his first of five extra-point kicks.

Just moments later, the Patriots scored two more points on a safety. The two-pointer happened when Minden’s punt snap sailed over head and out of the end zone.

So, Adams Central held a two-score lead without ever having run a play on offense.

Those early plays gave momentum for the Patriots. But for Minden, it could never recover even though the Whippets did rack up two second-half touchdowns against the AC non-starters.

“Momentum early is always a big part of the game. When you can get on top like that early in the game that definitely helps,” said AC coach Shawn Mulligan after directing the Patriots to their third win against no losses. “To come off a game like Wahoo and to continue to play at a high level the next week is difficult. So I thought our kids did a good job of battling.”

The Patriot defense kept Minden’s offense under wraps for much of the game.

By halftime, Minden had totaled just 32 yards on offense. Meanwhile, AC amassed 171 running yards and 43 through the air at the break.

“They fly around like we though they would. I don’t know if they were any better than what they thought. They weren’t any worse,” said Minden coach Jebb Hatch in his assessment of Adams Central. “They play hard and get off blocks really well. So it is tough to get much of running game going.”

Minden couldn’t penetrate into Adams Central territory in the opening half. After halftime, the Whippets revved up its running game against the Patriot reserves.

Minden got on the scoreboard late in the third quarter when Ryan Johnson hauled down a 38-yard TD pass from Braden Bates.

Hunter Heath scored Minden’s only other touchdown. He got to paydirt on an 11-yard pass from Bates.

“I thought Minden played extremely hard the whole game,” Mulligan said. “They were very physical. I thought that at times their defensive line was more physical than our offensive line. But we still put 49 points up and our first defense didn’t give up any points.”

AC got its ground game going early and never let up.

Hyatt Collins enjoyed a particularly good first-half, scoring on two touchdown runs and gaining 131 by haftime. He scored on a run of 10 yards and another from 45 yards away.

After feeding Minden a strong dose of Collins, the Whippets had to start trying to corral AC back Macrae Huyser.

The Patriots featured Huyser in their second-half offense. For example, on the opening drive of the second half, Huyser toted the ball six times for 35 yards. He closed the game with 72 yards on 14 carries.

“Macrae is an elusive running back. Collins is our physical runner. Those two guys had a really good game, especially Hyatt early on.”

“Cam Foster did a good job of executing the few throws that we had.”

Foster completed six of 10 passes for 68 yards. His 25-yard touchdown strike to Slechta in the first half was AC’s longest of the game.

Slechta again showed his ball hawking skills in the second half, much as he did early with his fumble return for the game’s first score. This time, Slechta nabbed an interception and rambled with it for a 60-yard touchdown. That put Adams Central ahead 43-0.

“I thought Minden played extremely hard the whole game. They were very physical,” Mulligan said. “I thought that at times their defensive line was more physical than our offensive line. But we still put 49 points up and our first defense didn’t give up any points.”