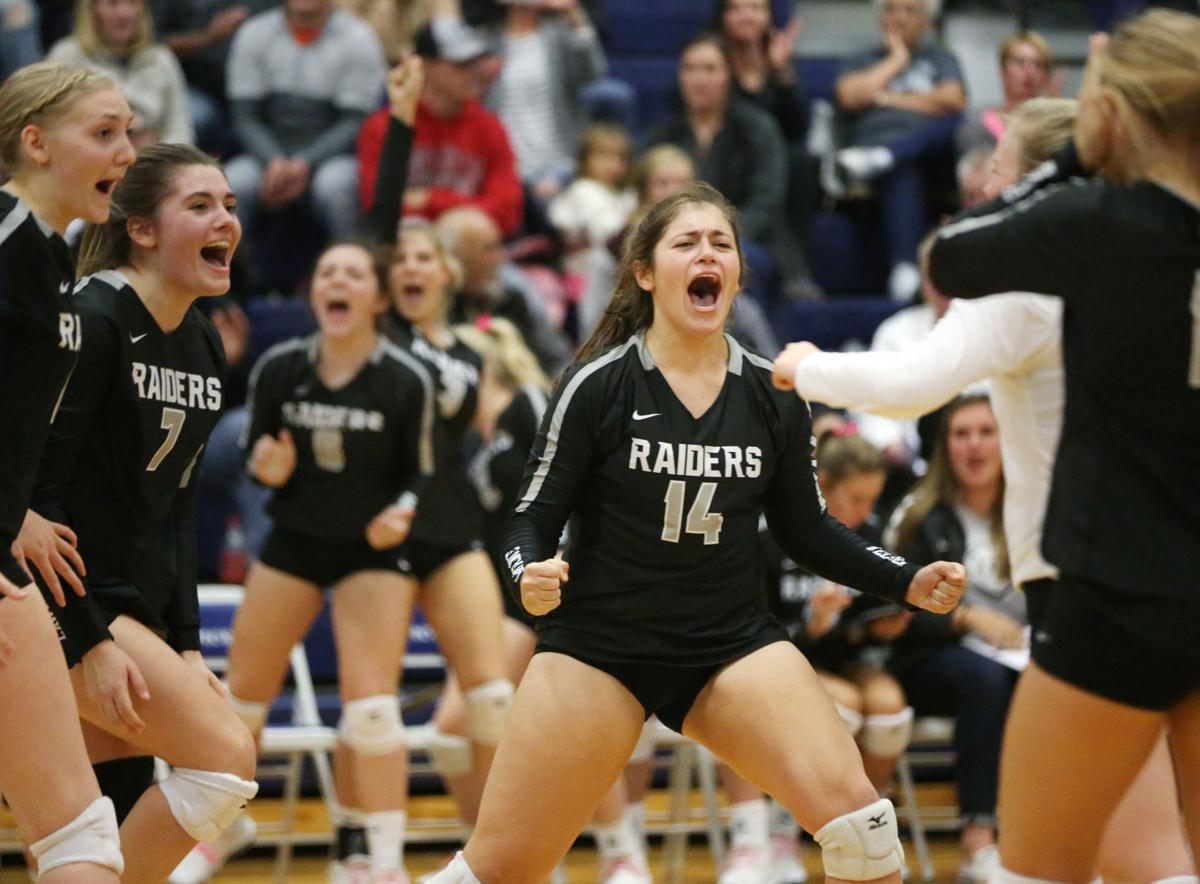 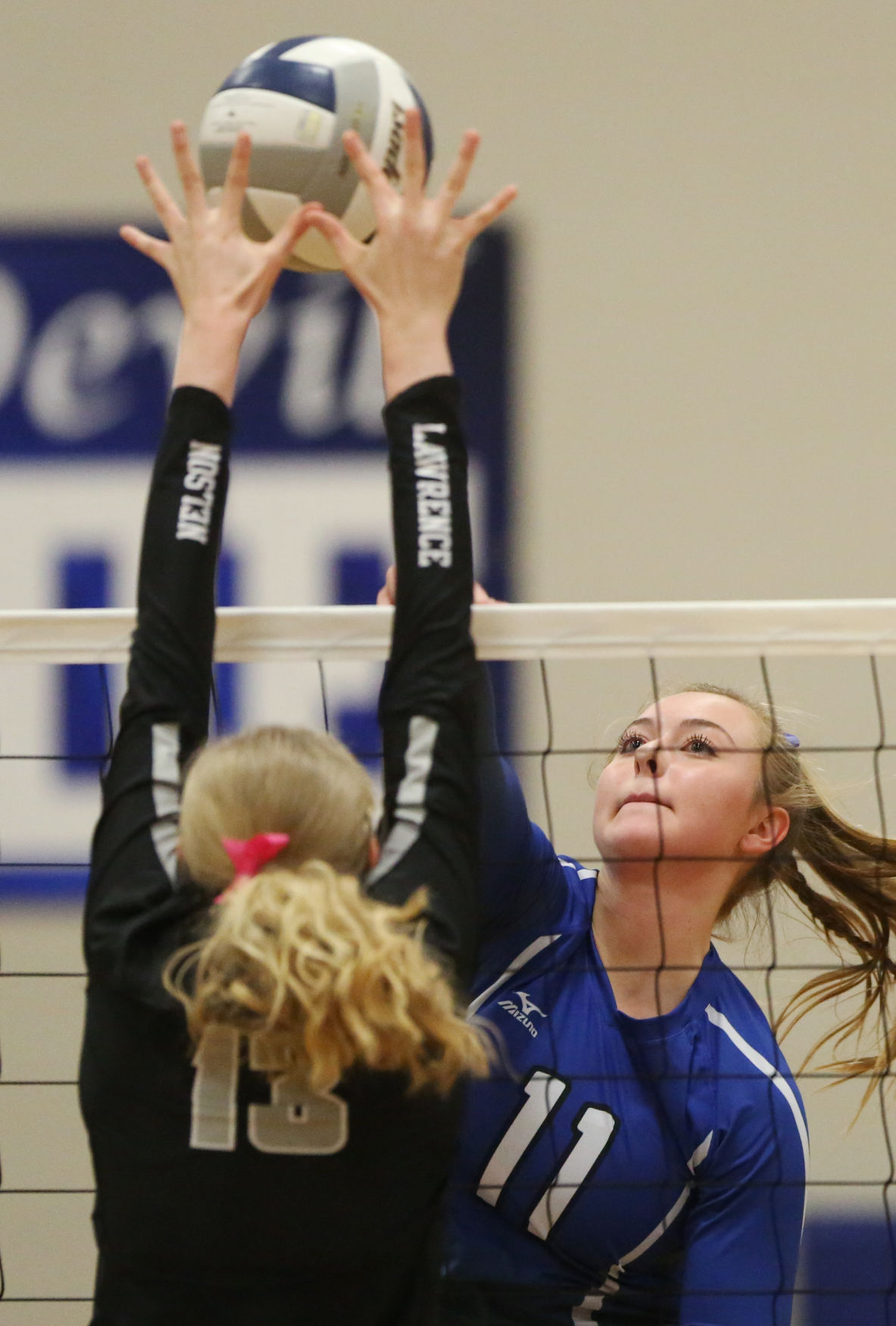 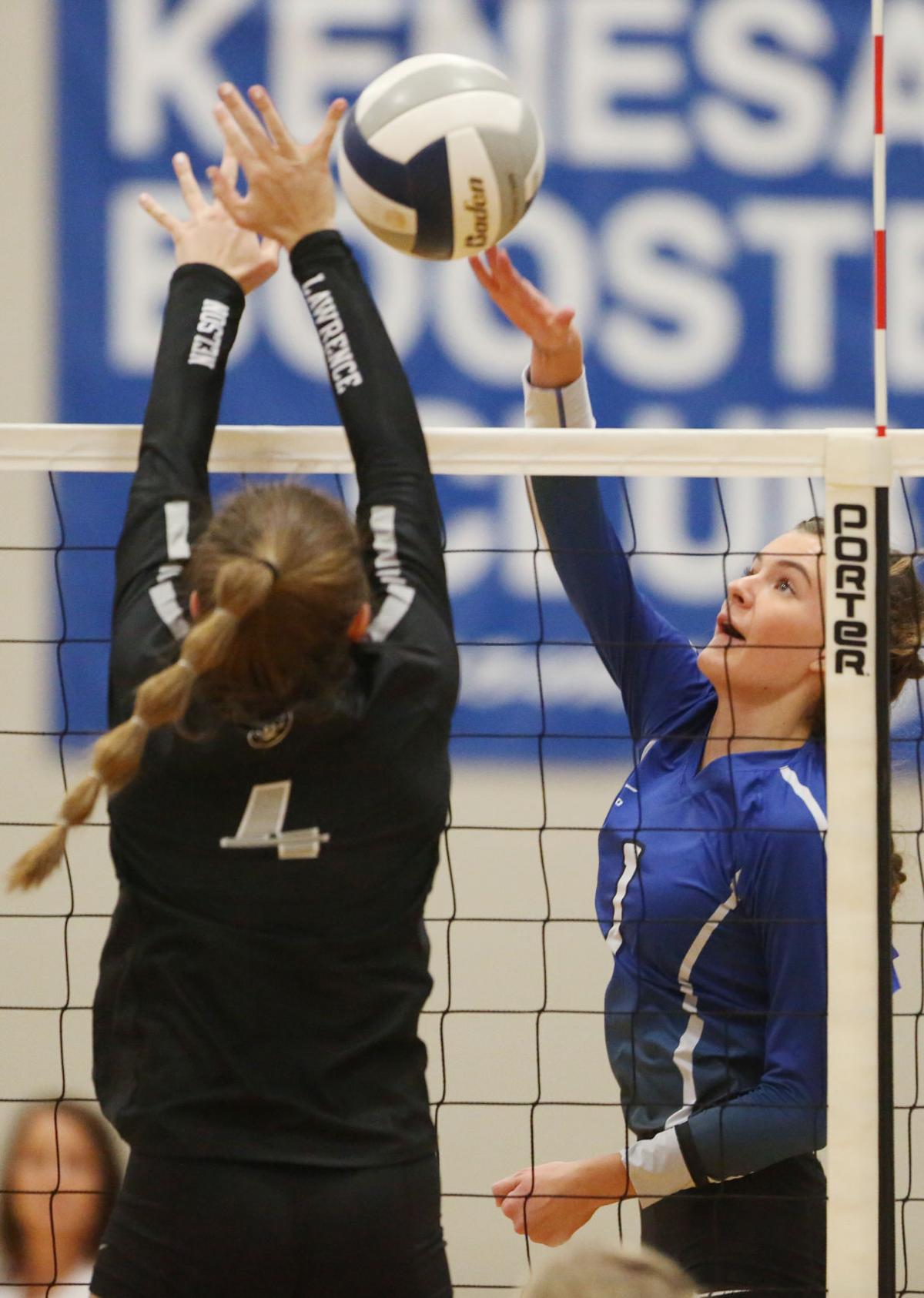 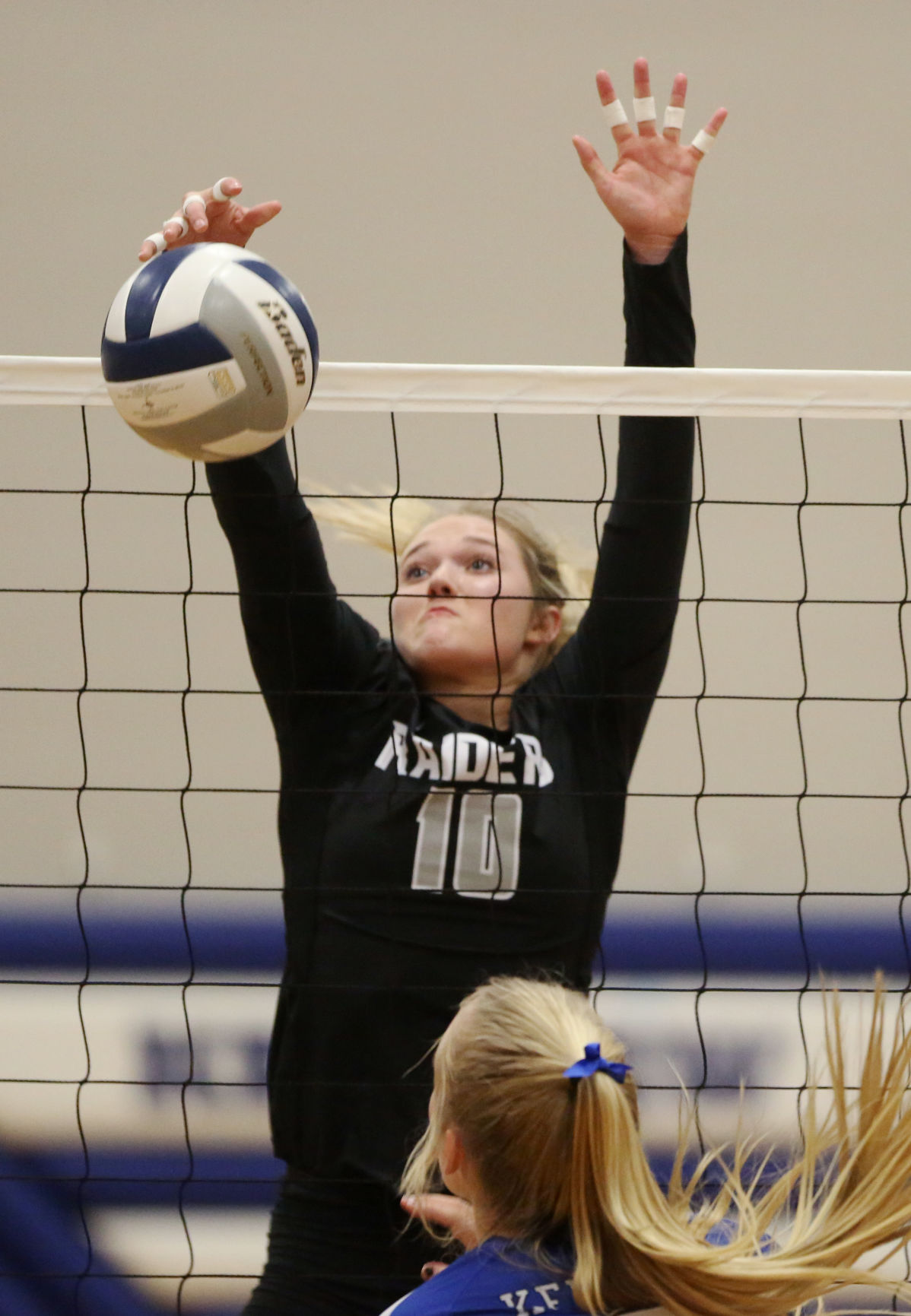 Lawrence-Nelson’s Karigan Drudik tips the ball over the net in the second set against Kenesaw in the Twin Valley Conference championship Monday night in Kenesaw. 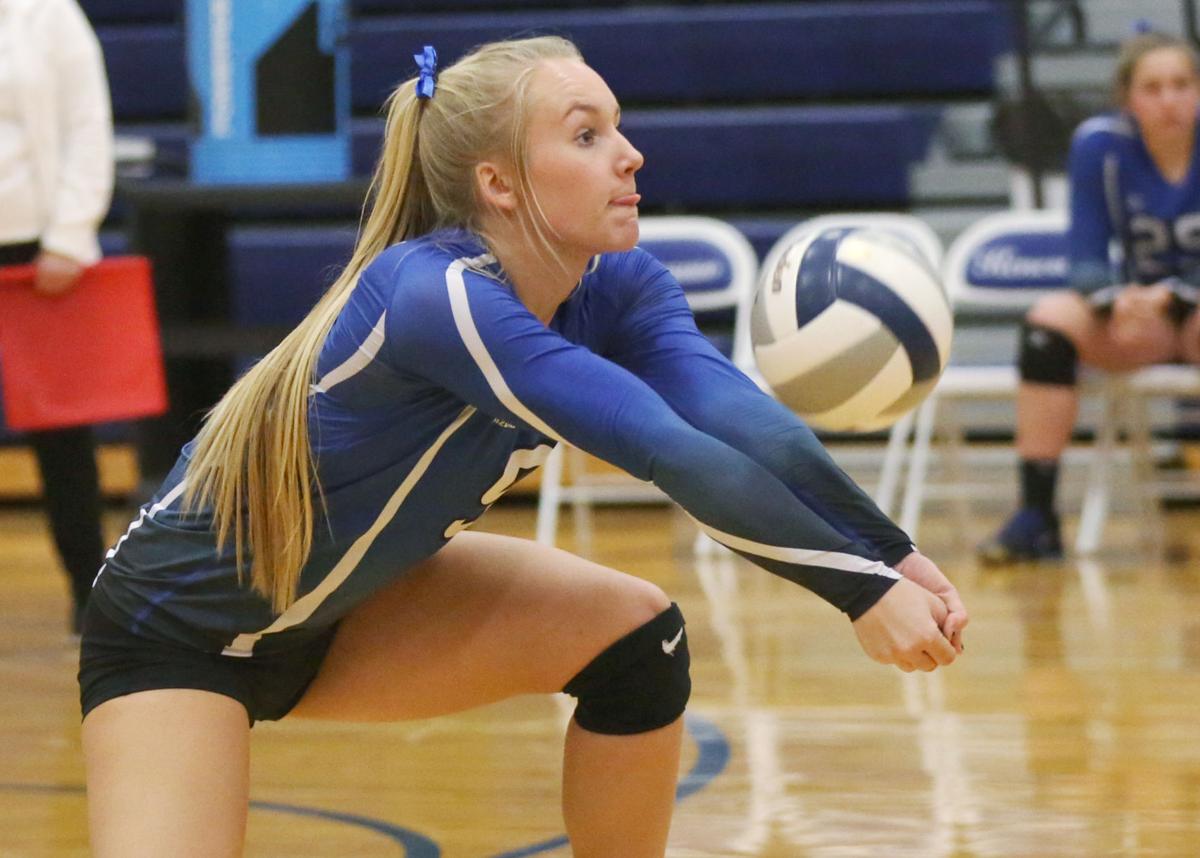 The Class D-2 No. 2 Raiders of Lawrence-Nelson (25-4) faced off against the Kenesaw Blue Devils (16-12) in the Twin Valley Conference Volleyball championship. The Raiders defeated the Blue Devils for the fourth time this season in straight sets 25-16, 25-17, 25-17.

“It’s exciting to get this win tonight,” said Raiders head coach Jamie Lay. “It’s never easy playing the same team four times in a season so it was good to see our girls come out and play consistent and with intensity tonight to get this win.”

The Raiders jumped out to a quick 4-0 lead behind a kill from senior Hallie Epley and an ace serve from fellow senior Taylor Harrington. Blue Devils senior Stefanie Anderson tallied a kill to stop the run. The Raiders scored the next three points to take a 7-1 lead before another kill from Anderson stopped the run.

A block from Epley and junior Emily Miller gave the Raiders a 14-7 lead midway through the set. Raiders sophomore Emma Epley would get a kill giving the Raiders a 20-12. Senior Karigan Drudik tallied a pair of kills down the stretch for the Raiders leading them to a 25-16 first set victory.

Drudik nailed three kills early for the Raiders as they took an 11-2 lead early in the second set. Blue Devils sophomore Cassidy Gallagher picked up a couple kills of her own to bring the Blue Devils to within five points. But the Raiders would score the final four points of the set with a kill from junior Emily Miller to win 25-17.

The Blue Devils took their first lead of the match on a kill by Anderson to take a 2-1 lead early in set number two. With the set tied at seven a piece, senior Allison Miller served an ace that sparked a 4-1 run to give the Raiders an 11-8 lead. Late in the set Harrington connected with Drudik, Hallie Epley and senior Annie McCartney for three straight kills giving the raiders a 17-9 lead.

Down 23-15 the Blue Devils got back to back kills from sophomore Chloe Uden and junior Kaylee Steer but the Raiders would score the final two points of the match to win 25-17.

Lay contributes the success of the season this far to that of her senior leaders.

“We have five seniors on the court, who have a lot of experience and it’s nice that this season has been a rewarding season so far for them,” Lay commented. “They really set high goals for themselves early on and set the tone for everyone else and expect a lot from each other and the rest of the team. Winning the Conference Tournament was one of their goals.”

Despite the loss, Blue Devils head coach Christian Kroos is was pleased with how his team competed.

“I wanted us to be competitive and get after it tonight,” Kroos said. “The last three times we played them we played very conservative and didn’t attack as much as we should have. I thought we attacked a lot better tonight but didn’t play as well defensively as we needed to stay with them.”

The Bobcats opened up set two on an 8-3 run getting three kills from senior Madison Menke. The Flyers rallied back and tied the set at 12 a piece on a kill from sophomore Abby Yelken. With the score tied at 19-19 late in the set, the Flyers went on a 3-0 getting back to back kills from sophomore Bryannah Hindal and an ace serve from junior Kendall Colby to take a 22-19. Yelken tallied two more kills for the Flyers as they won set two 25-21.

The Flyers built a 14-9 lead in the third set of the match. The Bobcats were able to cut the lead to three before the Flyers went on a 6-0 run. Down 12-20 the Bobcats put together a five point run of their own to bring them back to within three points.

Late in the set Meyer got two blocks for the Bobcats and Menke a kill to make the score 22-23 in favor of the Flyers. Yelken sealed the deal for the Flyers finishing the set with a kill and a block giving them a 25-22 victory and third place finish in the conference tournament.