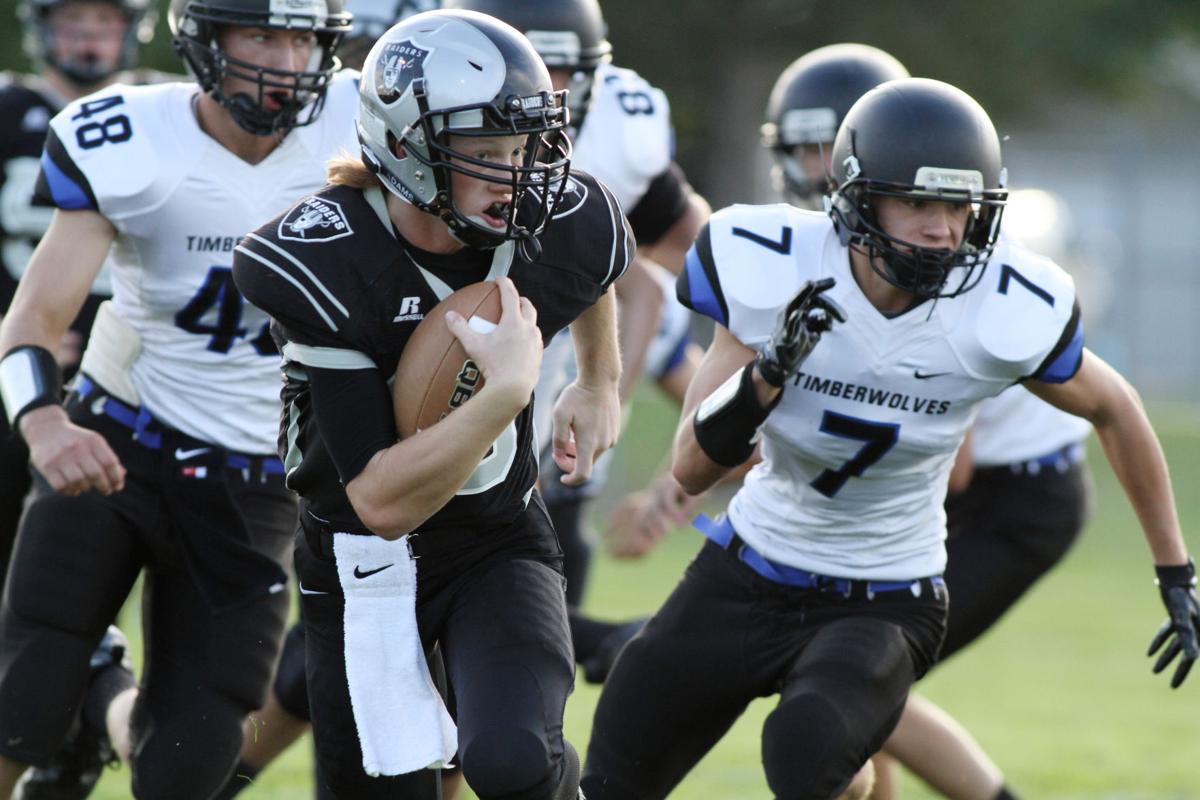 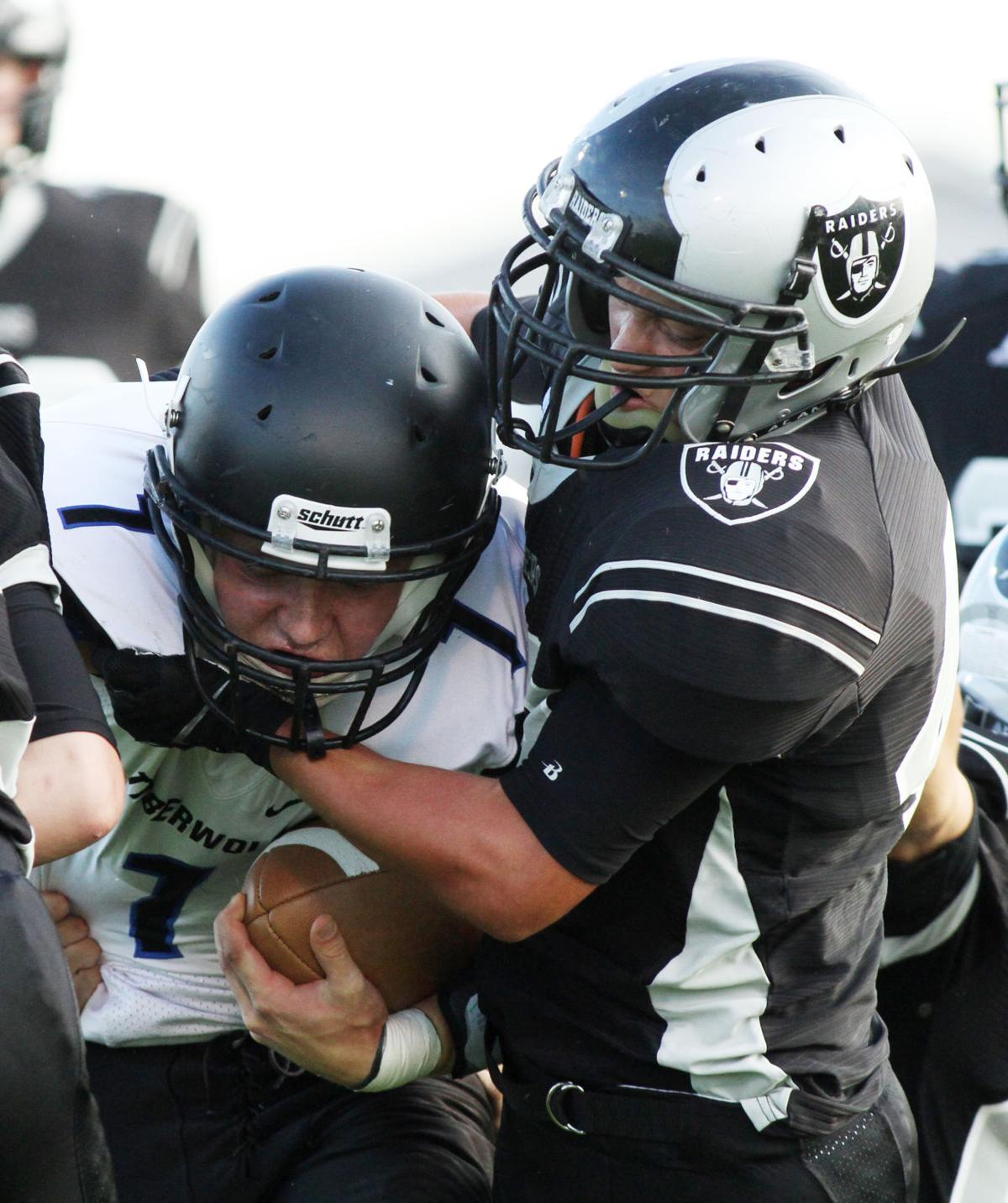 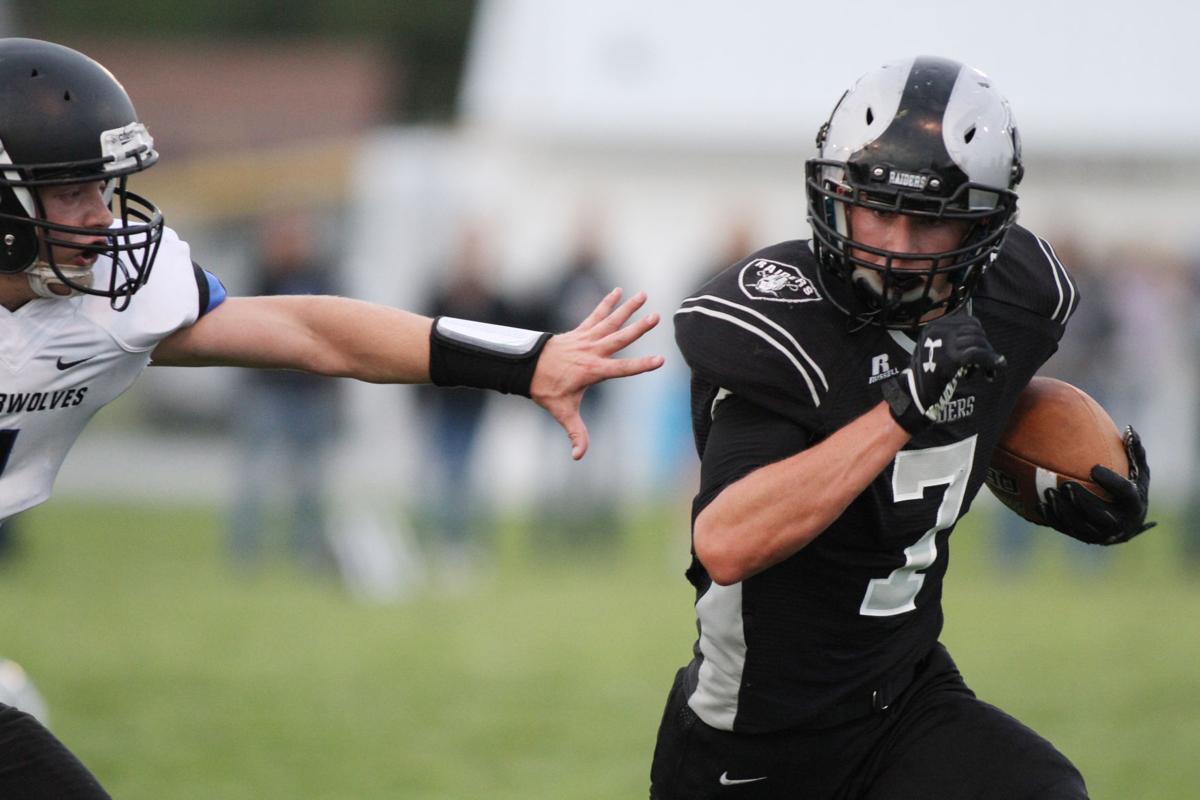 Lawrence-Nelson's Kevin Schroer outruns the reach of Exeter-Milligan's Colton Bossaller during their game Friday in Lawrence.

Lawrence-Nelson's Kevin Schroer outruns the reach of Exeter-Milligan's Colton Bossaller during their game Friday in Lawrence.

LAWRENCE — Kicking off after his team’s second touchdown within the first seven minutes of the first quarter, Lawrence-Nelson’s Matt Buescher kicked the ball into the chest of the Exeter-Milligan lineman facing him.

Lawrence-Nelson recovered the ball and scored its third touchdown three and a half minutes later en route to a 48-8 victory Friday over the Exeter-Milligan Timberwolves.

Raider coach Brian Blevins said while that kick wasn’t planned, it did follow the game plan of limiting the Timberwolves’ opportunities on special teams.

“We wanted to kick it short and, fortunately, through the execution of the game plan once in a while it’ll go your way and we were fortunate there,” Blevins said.

Following a 46-14 victory last week over Sterling that Blevins said was not particularly clean, the Raiders emphasized execution in practice this week.

“That was just a focal point that we wanted as we try to get better over the course of the year— to limit the penalties, clean the focus up and make sure the execution’s a little higher,” he said. “I thought they did a great job of it tonight. When we can combine a high level of execution with our physicality, we can do a lot of things well.”

Lawrence-Nelson was leading 40-0 at half, leaving a running clock in the second half.

The Raiders’ defense limited the Timberwolves to 183 yards, with 79 of that coming through the air from sophomore quarterback Spencer Pribyl, who completed 12 of 19 passes.

The Timerwolves came close to scoring on a few positions prior to their solitary touchdown, a 1-yard rush from Bossaller with 7:29 left in the game. Pribyl then connected with junior Seth Maxon on the 2-point conversion pass.

“We’ve got a lot of work to do,” E-M coach Dean Filipi said. “Lawrence-Nelson has a really good team, which made it tough for us. We’ve got a lot of things we need to work on and, hopefully, the kids will keep working on it and keep their heads up. It’s good to play good teams. You find out really fast where you’re at and what you need to work on.”

“We’re in a transition where our upperclassmen know what we need to do and our underclassmen are still learning and figuring it out,” Filipi said. “One thing about our guys is they’ll work hard and keep plugging.”

The Raiders had a balanced attack. Four players rushed the ball, and all of them had at least 48 yards but no one gained more than 100 yards.

Junior Kevin Schroer came the closest, as he had 11 rushes for 97 yards and two touchdowns. He also caught a 25-yard touchdown pass from senior quarterback Colton Biltoft.

Senior Gavyn Buschkoetter had seven rushes for 48 yards and a touchdown.

Sophomore Boone Svoboda came in late and scored a 71-yard rushing touchdown the only time he touched the ball, which was the game’s final score with 6:57 left.

“We can spread things out and do different things with different people,” Blevins said. “That’s going to make the defense be honest and allow us to get our athletes some space and make plays.”

The Raiders play next on Sept. 16 when they visit Friend.

The Timberwolves will visit Pawnee City next week.