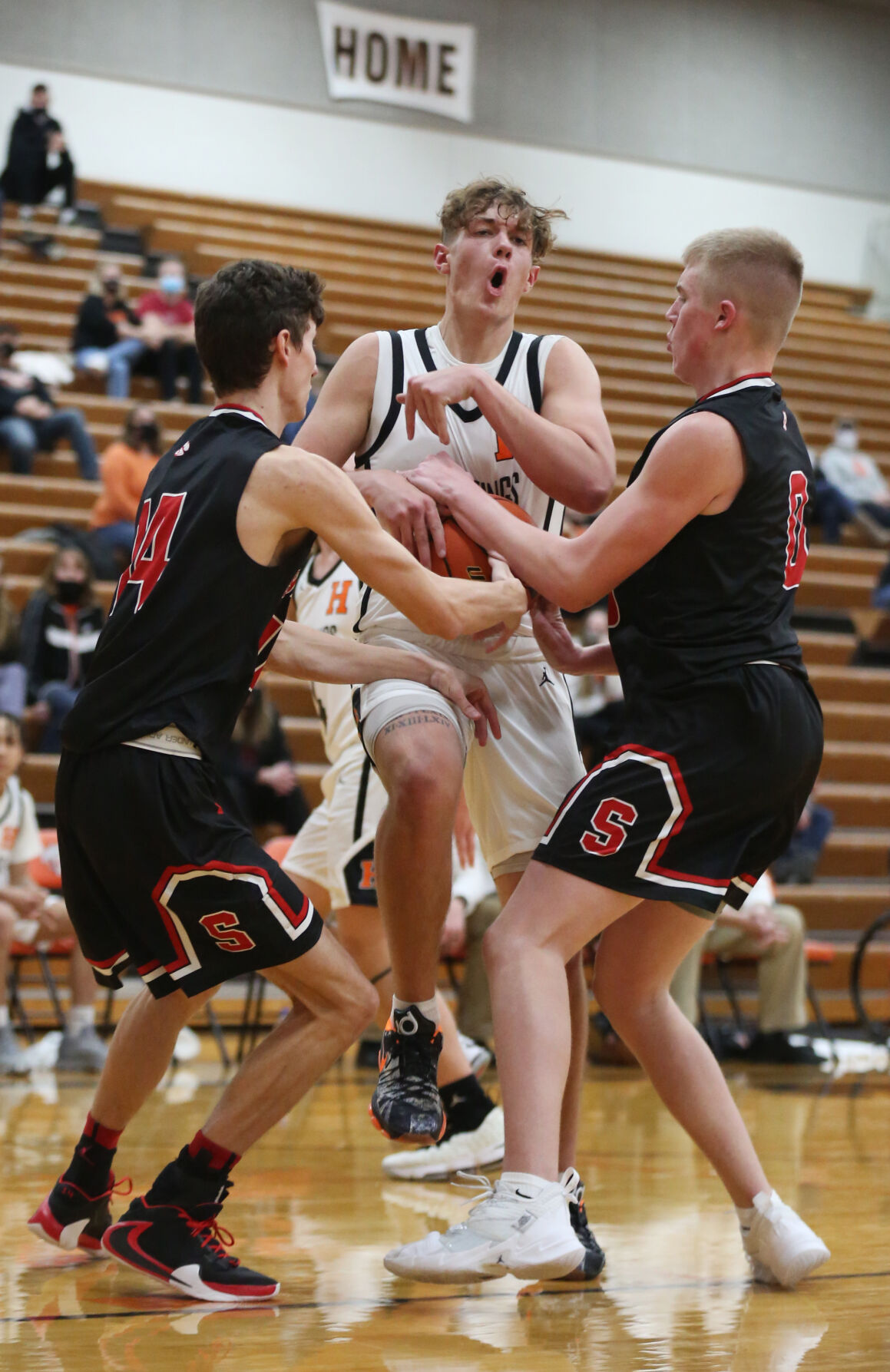 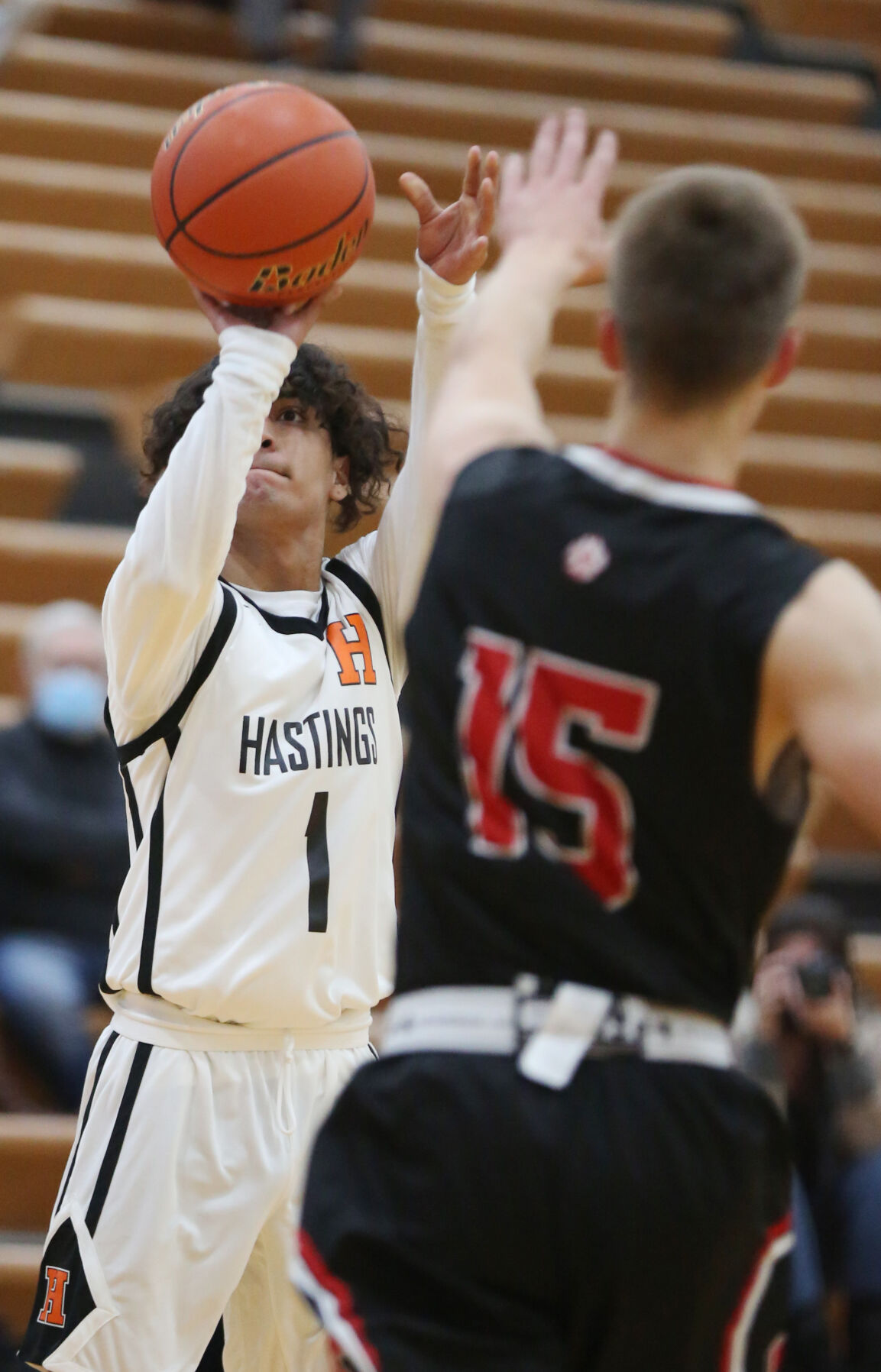 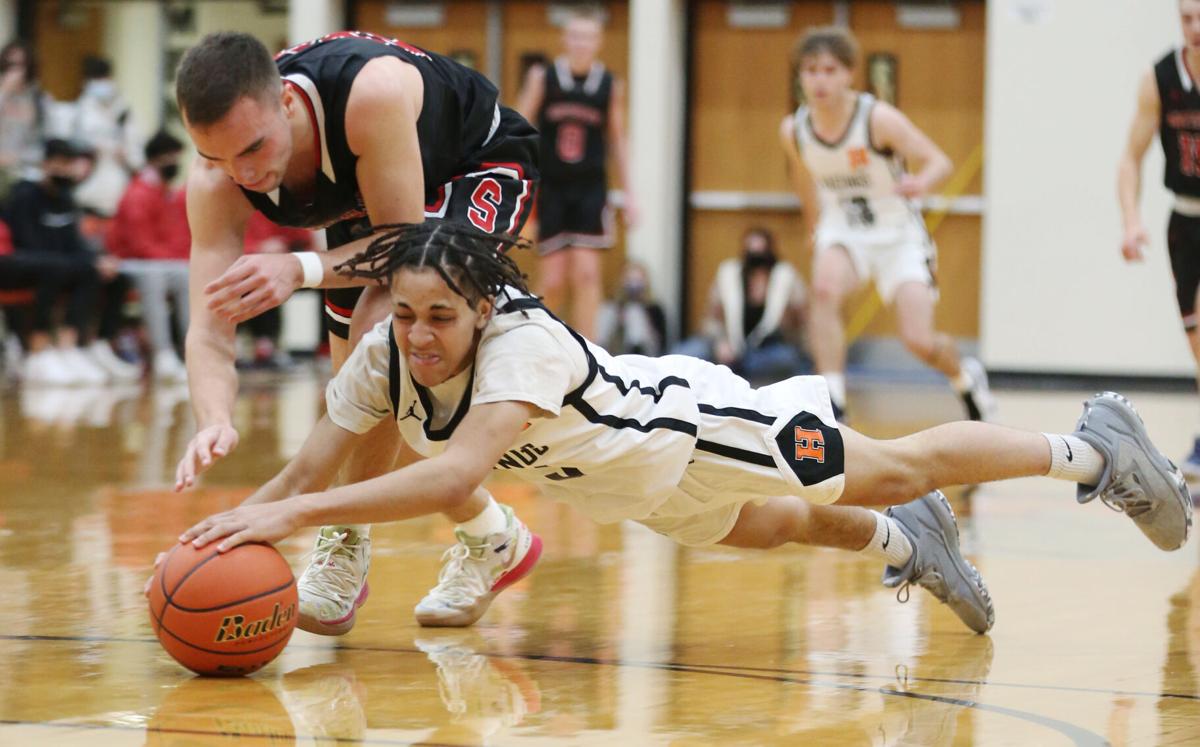 Hastings’ Roddy McClain dives for the ball in front of Scottsbluff’s Izaiah Mendoza in the second half of their Tiger Holiday Tournament game Wednesday. 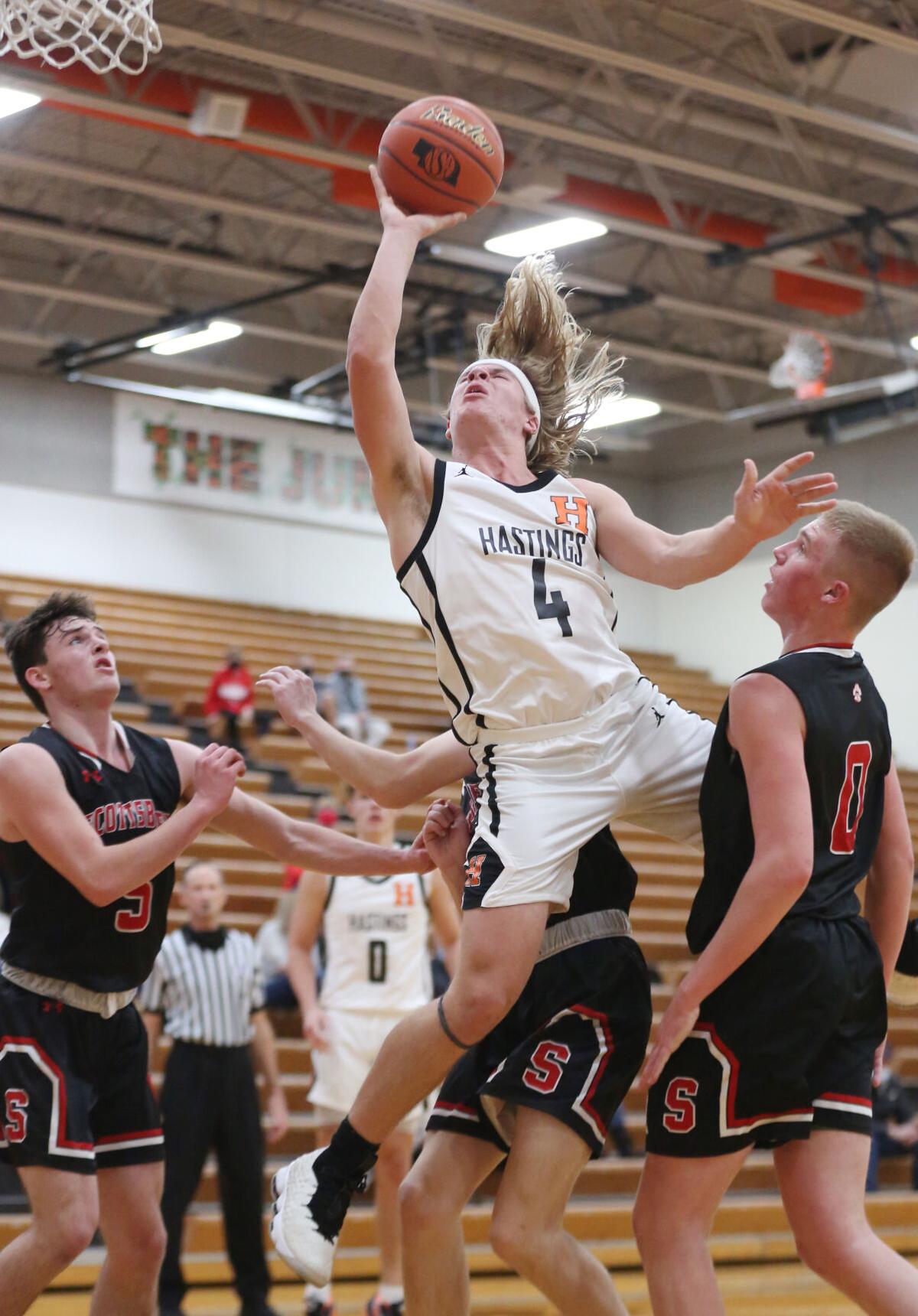 For the first 90 seconds, it looked as though the Hastings boys basketball team may have had too many Christmas cookies over the moratorium break.

The Tigers quickly found themselves down 8-0 against Scottsbluff Wednesday and didn’t score a point until 5 minutes, 23 seconds into the first quarter.

But Hastings turned up the intensity and finished the game with a high energy level, as the Tigers battled back from a double digit deficit to take down the Bearcats 54-53.

“That was a fun ball game. I thought the kids really attacked adversity again,” said HHS head coach Drew Danielson. “We got down early in the first quarter and just started plugging away and chipping away.”

Scottsbluff came out on a tear in the first, scoring the first 10 points on five shots, while the Tigers missed their first four shots and turned the ball over two times in the first five minutes.

“I guess it’s a holiday tournament, so all bets are off as far as what you come out with,” Danielson said. “The boys are getting pretty good at attacking adversity, which is a pretty good trait to have in the second half of the season.”

Closing out quarters became a strongpoint for the Tigers on the night. After falling behind 10-0 in the first, Hastings then went on a 10-4 run to close out the period.

In the second, scored the final six points of the frame, and the Tigers then ended the third on a 12-4 run.

Danielson said a lot of the success late in quarters came from the energy brought to the floor by some of the players that started the game on the bench.

“We have a bunch of competitors on our team,” he said. “We’re starting to figure out if you stay positive, it’s a long ball game and you play four quarters for a reason; you might not win the first, might tie the second, but in that fourth quarter we have a bunch of gamers and competitors that make plays.

“It takes a collective group of high character kids to have buy in. All across our bench, our JV kids behind the bench were great. It really just takes everyone.”

Hastings was in a 41-30 hole with just over three minutes left in the third quarter but cut the lead to just three going into the fourth period.

The Tigers took their first lead of the game thanks to a big spark from Gabe Garcia, who scored HHS’ first three buckets in the final period.

Garcia’s 3-pointer tied the game just 14 seconds into the fourth, and then he gave Hastings a 47-45 advantage after a steal and a layup.

After the Bearcats regained the lead, Garcia took it right back with his seventh point of the frame and 15th on the night.

“All my teammates trusted me and knew to get me the ball,” Garcia said. “I knew it was the fourth quarter and we were down, so I had to do something about it to get us back up.”

“He had a couple of games where he didn’t hit shots, but to stay level-headed and overcome that and come out with a really great mentality (Wednesday), it was fun to watch that. It makes me happy as a coach that he can continue to overcome that and keep playing,” Danielson said.

Hastings trailed 53-50 with under four minutes remaining until Jarrett Synek pulled his team within a point after a tough layup. Brennan Witte put the Tigers on top at the 2:05 mark.

Scottsbluff had multiple chances to take the lead, but the HHS defense forced late turnovers and benefitted from a miss on an open look by Bearcat junior Tyler Harne in the final seconds.

Harne led Scottsbluff with 18 points and hit four 3-pointers in the game, but his final shot was off the mark and fell into the hands of Synek, who held the ball as time expired.

“In the timeout, going into the last play, we said, ‘We’re going to leave their best player open and hope that he misses and we’re going to win.’ And that’s what happened,” Danielson said, followed with a laugh. “We didn’t guard that one very well, but we’ll take it.”

Roddy McClain put in some big minutes on the floor for the Tigers and took the team’s intensity up another level. McClain, a senior, came off the bench and was diving for loose balls and denying passes throughout the night.

On the Bearcats’ final possession alone, McClain wreaked havoc on the inbounds pass as Scottsbluff eventually called a timeout to figure out a different way to get the ball in play.

Hastings was originally scheduled to play Bennington in the opener for the Tigers’ holiday tournament, but Bennington was not able to make the trip due to health concerns. HHS will not play Thursday, as it was normally scheduled, so the Tigers will have to wait until 2021 to return to action on the court. Hastings will travel to Elkhorn Mount Michael — ranked No. 1 in Class B — on Jan. 8, 2021.

“We have to control what we can control. Obviously, in the season we’re in we’re just lucky to be playing games and thankful for that,” Danielson said. “We have a huge test next Friday at No. 1 Mount Michael.”