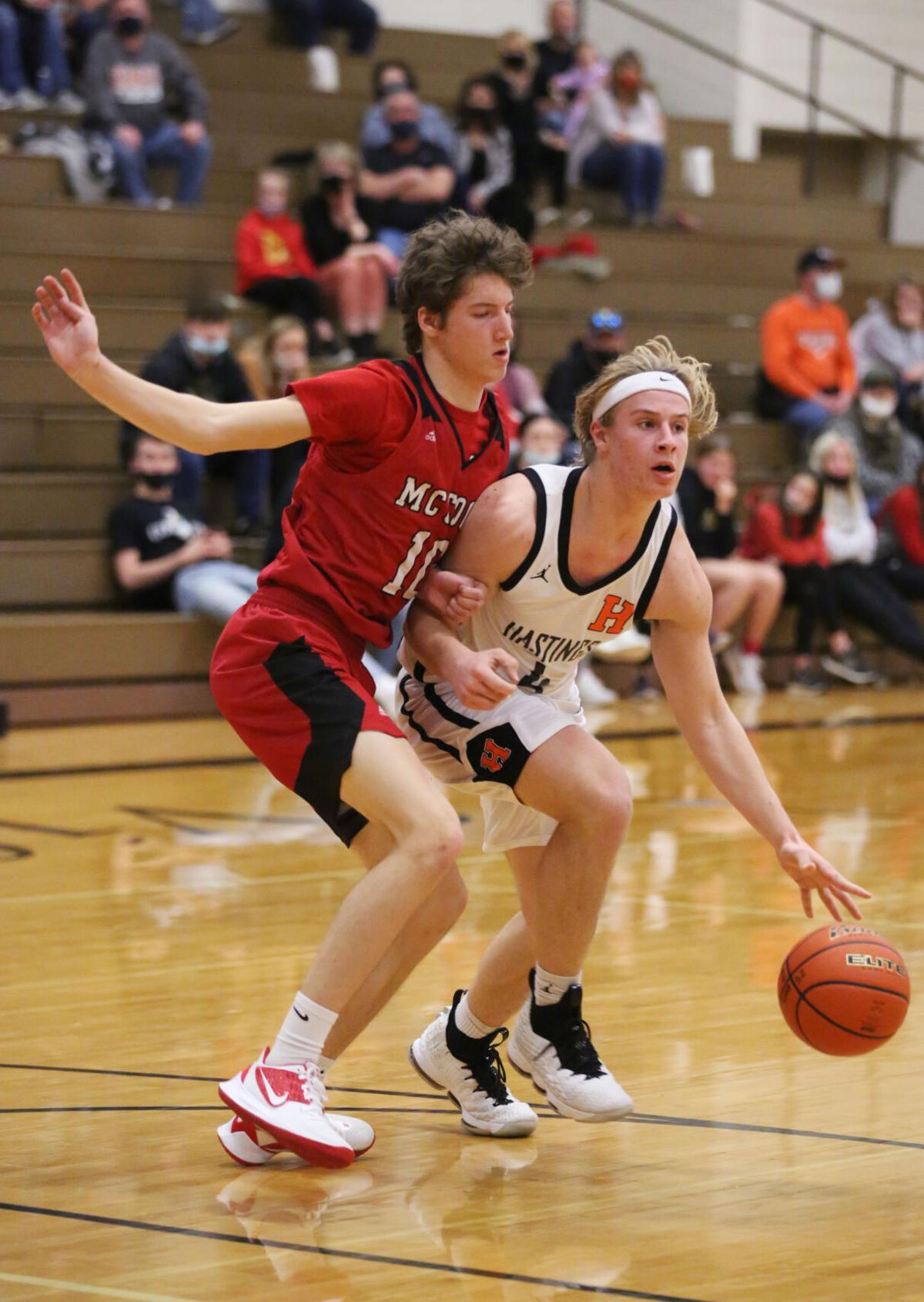 Hastings’ Jarrett Synek is guarded by McCook’s Brendan Gillen in the second half of their Class B, subdistrict 7 game Monday night in Grand Island. 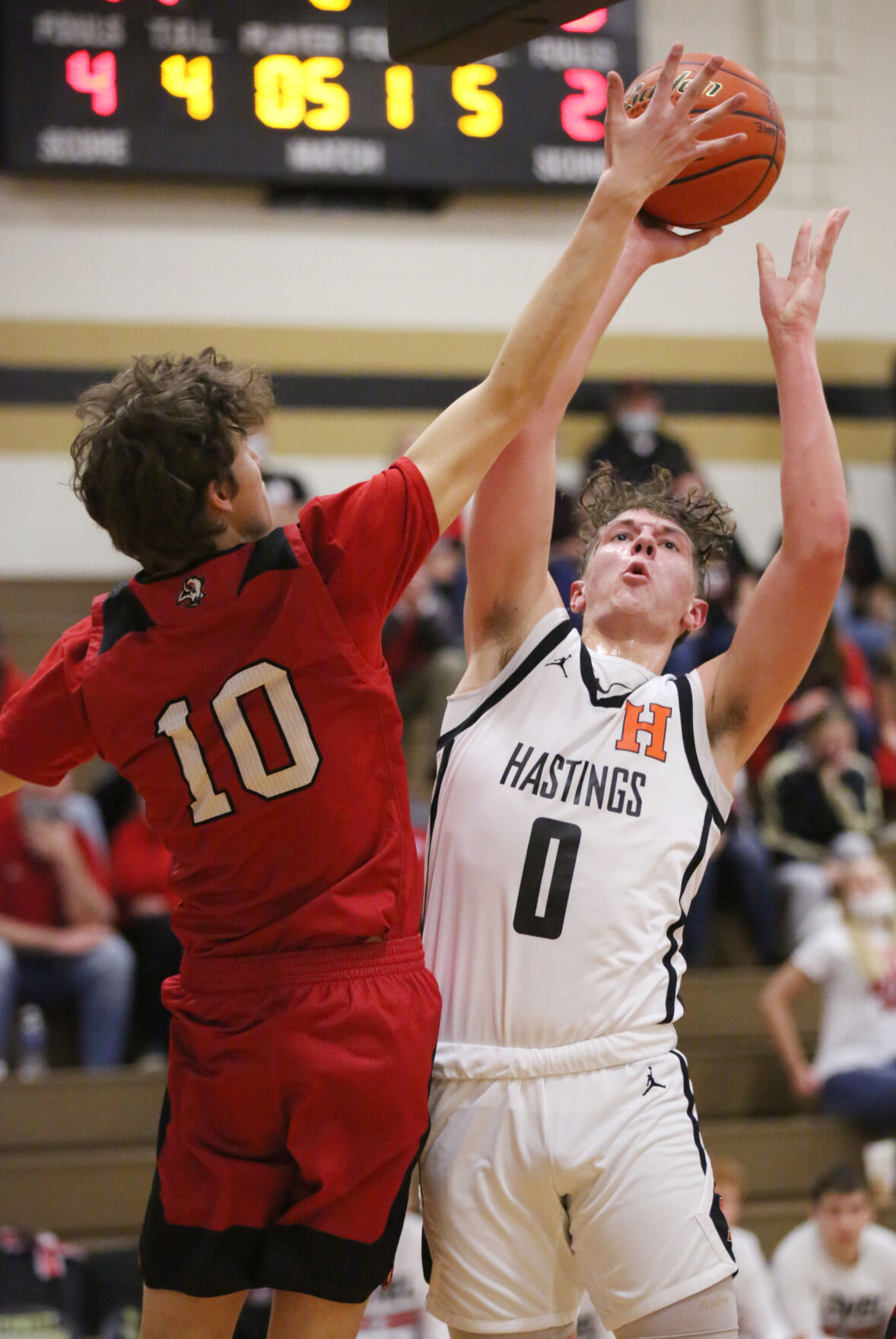 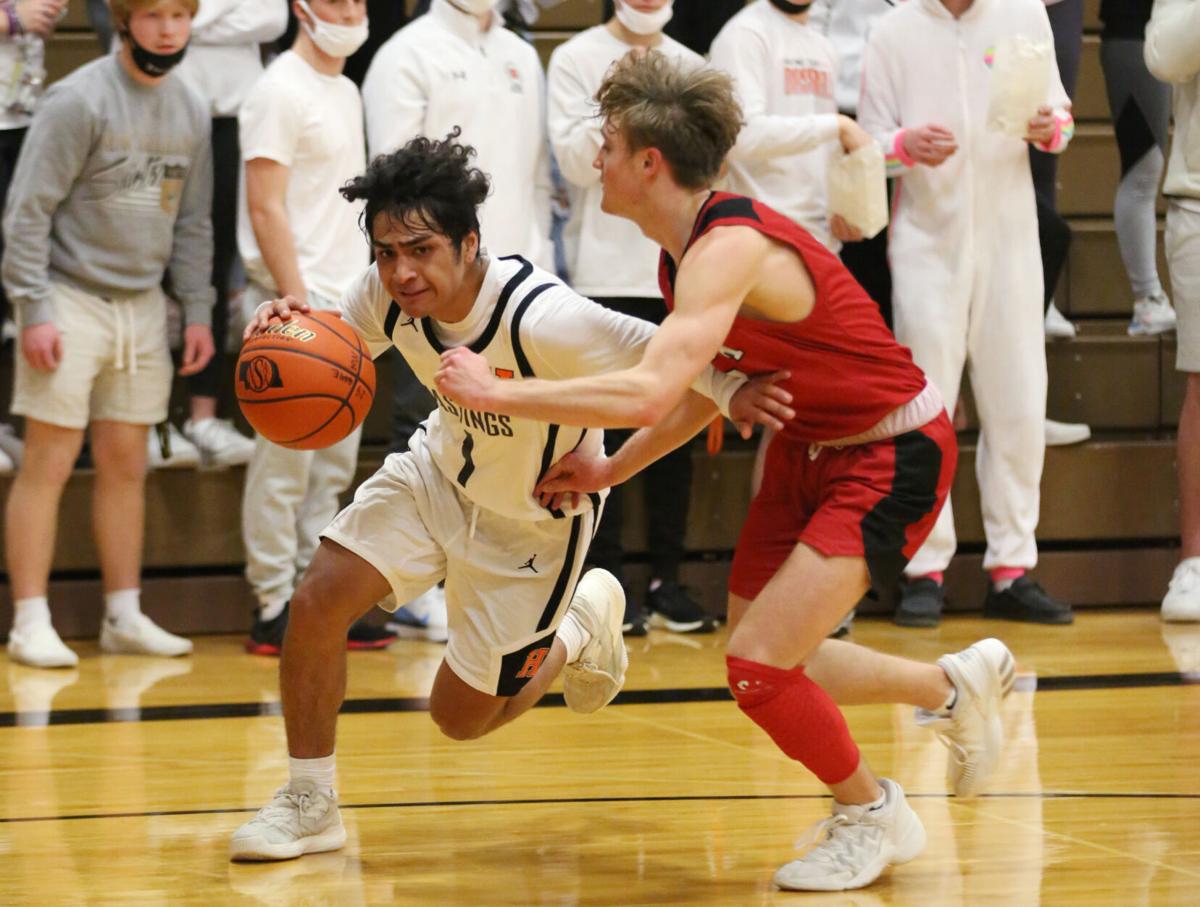 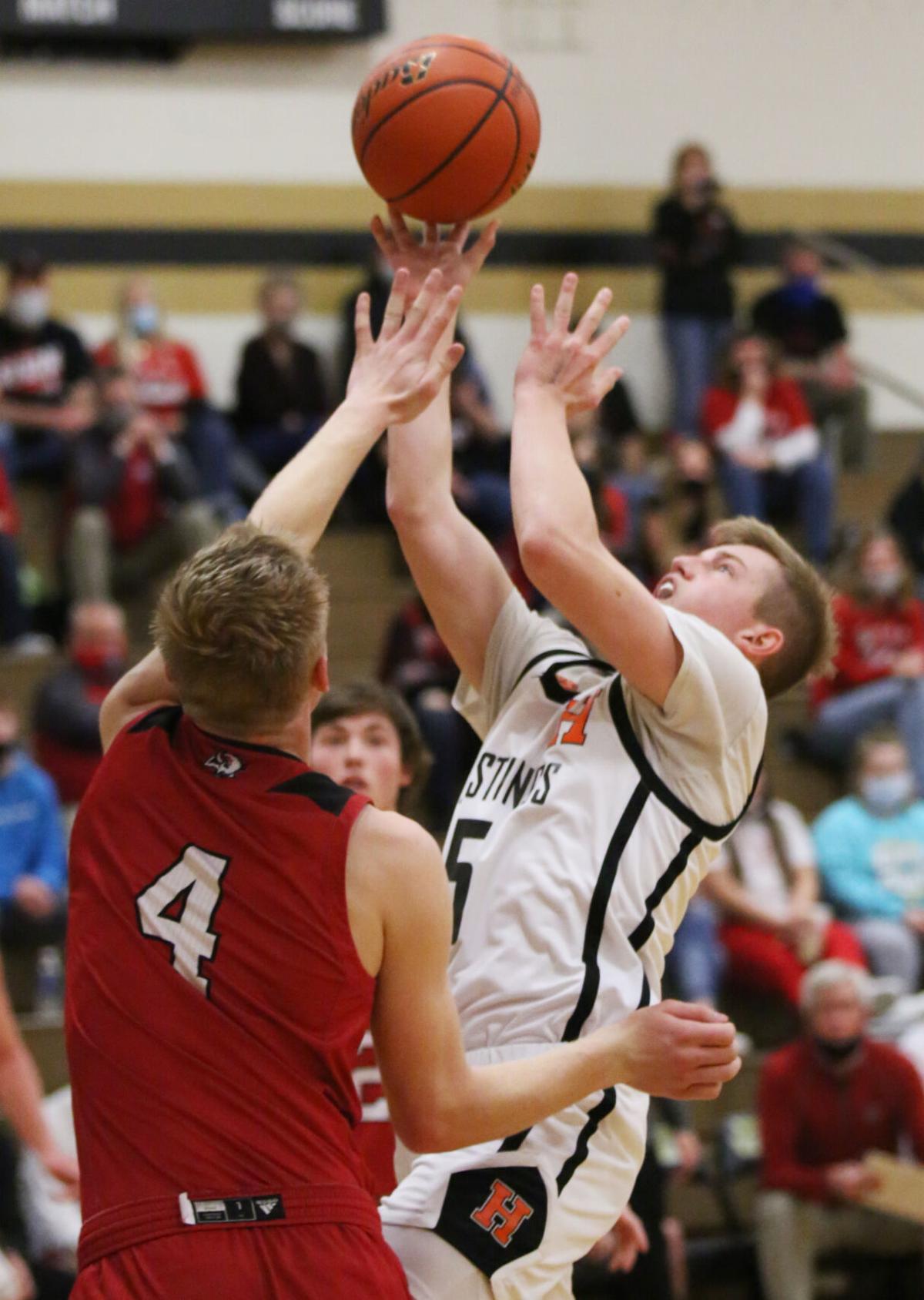 Hastings’ Landon Jacobus puts up a shot against McCook’s Cole Cappel Monday night during their Class B, subdistrict 7 game in Grand Island.

GRAND ISLAND — Throughout the fall football season, Hastings quarterback Jarrett Synek was throwing dimes to his receivers on the gridiron, but on Monday, he showed that — like his recievers — he’s got soft hands and great body control.

The Tigers were tied with McCook in the Class B, subdistrict 7 semifinals as the closing seconds were ticking away. HHS’ Brennan Witte put up a 3-pointer that fell short, but Synek raced under the hoop and then, all in one motion, leapt and caught the ball in the air and contorted his body to get a shot off. The ball went off of the backboard and bounced on the rim three times before falling into the net after the buzzer had sounded.

“We were swinging it around and I saw Brennan shooting and I saw it was short out of his hand, so I tried to get to the rim as quick as possible,” Synek said. “I just threw it up there really.”

BUZZER BEATER!! 🚨 @HastingsTigers get the subdistrict victory over McCook thanks to @JarrettSynek’s game-winner as time expired! Tigers win 43-41 and will play Northwest Tuesday in the subdistrict finals. pic.twitter.com/Um98XdaXvo

“We wanted a high ball screen with Jarrett getting to the hole, but they cut it off and we went back around to Witte. Jarrett’s a gamer, so he went and made a play and bailed us out,” said HHS head coach Drew Danielson.

Synek’s basket gave Hastings a 43-41 victory over the Bison, who held a five-point lead with just over 2 1/2 minutes left in the game. The game played out like many that the Tigers have endure throughout the season, with both teams going back-and-forth, attacking one another.

Eleven of the Tigers’ 20 games have ended with a margin of victory fewer than nine points, and HHS has lost seven of them. So Danielson and the Tigers were happy to have one go their way.

“I told the guys in the locker room that great things happen to great people that work hard. And they’re great kids that work hard,” Danielson said. “They don’t always execute what I want them to execute, but they work hard. It’s postseason, it’s subdistricts, anything can happen.”

Hastings started to gain separation in the second quarter, after trailing 11-10 at the end of the first. The Tigers outscored McCook 13-6 in the frame and led by as many as eight points. While it was a 3-pointer from Roddy McClain that built the eight-point advantage, most of the work was done on the defensive end, which created fastbreak opportunities for the Tigers.

“We knew they couldn’t handle pressure very well...in that second quarter we were just athletes flying around getting tips,” the HHS coach said. “That helped our offense, because our offense wasn’t good all night.”

Hastings’ defense forced five turnovers in the second, its highest output of the night. But McCook came roaring back in the third, thanks to a solid defensive effort of its own. The Bison limited Hastings to 2-for-11 shooting from the floor and tallied 14 points to Hastings’ seven.

McCook’s Adam Dugger put the finishing touches on the quarter, with his two-point basket giving the Bison a 31-30 advantage heading into the fourth quarter.

The Bison’s late five-point lead was trimmed to two with a pair of free throws from Brennan Witte. Then, with just 1:45 left on the clock, McClain drained a big-time trey to tie the game.

McCook had an attempt at a 3-pointer after the game was tied, but the Tigers defended well and got the rebound, setting up the game-winning possession.

Synek said he wasn’t sure if his shot was going in when it left his hand, just because he had to put it up from an extreme angle in such a short amount of time.

“I tried putting it right off the corner of the square on the backboard, but I missed so I didn’t know if I made it. But then I saw it rolling around and then heading in,” he said. “I was just trying to get it up because I knew the buzzer was going off.”

The win, which snapped a six game losing streak for the Tigers, set up a rematch with Northwest for the B-7 subdistrict finals, which will be at 7 p.m. at Northwest on Tuesday. The two teams met Feb. 2, when the Vikings — who have now won six straight after Monday’s win over Lexington — beat HHS by seven.

“We have to realize this is it; this is the fight for our season,” Danielson said. “We’ve never been in a subdistrict game with this team before. We reacted a little different than I would have liked, but the bottom line is we won the game, and we’ll go compete (Tuesday).”