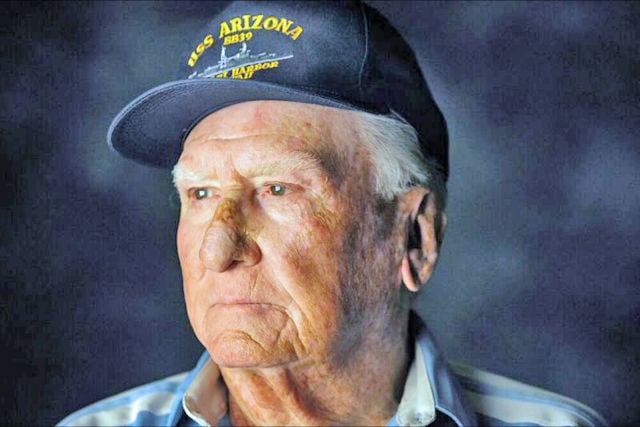 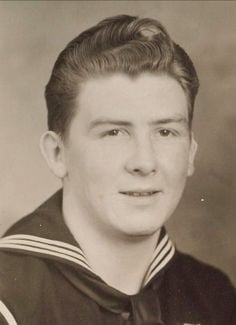 Yet that is how the 1940 graduate of Red Cloud High School will be remembered by his wife of 69 years, Velma; his sole surviving child, Randy; 13 grandchildren; extended family members; and the thousands who purchased his New York Times’ Top 10 Best Selling Book, “All the Gallant Men,” a memoir recounting his harrowing escape from death during the Pearl Harbor bombing in Hawaii on Dec. 7, 1941.

Stratton died peacefully in his sleep in his Colorado Springs home on Feb. 15 at age 97.

Services are slated for 10 a.m. Saturday at Rocky Mountain Calvary Church in Colorado Springs. An estimated 1,000-2,000 people are expected to pay their respects.

Setting off from the church around 11:30 a.m. Mountain Standard Time, an honor contingent that includes American Legion Riders on motorcycles will escort the hearse all the way from Colorado Springs north into the Denver area, then east on Interstate 70 across eastern Colorado and northwestern Kansas. The procession is expected to enter Tribland sometime around 7:30 p.m. Central Standard Time on Saturday, rolling east on U.S. Highway 36 through Smith Center, Kansas, then up north through Lebanon to arrive at Williams Funeral Home in Red Cloud after 8 p.m.

A graveside service with full military honors is planned for 11 a.m. Monday in the Red Cloud Cemetery. Those attending the services for Stratton are asked to wear Hawaiian shirts; red, white and blue; USS Arizona apparel; or service uniforms.

Although Stratton will receive a hero’s send-off in the days ahead, he was not one to draw attention to himself or his military service over the years, his son said.

“My dad was just a very humble guy,” Randy said. “Nobody ever expected he was on the Arizona because he never said anything. When he was at the (Pearl Harbor) memorials, he would always wear a suit and tie out of respect. He just wanted to make sure they never forgot his fellow sailors.”

Stratton was born July 14, 1922, to Robert and Jessie Stratton at Inavale. He enlisted in the Navy following his high school graduation and was serving aboard the battleship Arizona as a Seaman First Class on the fateful day President Franklin D. Roosevelt later predicted would “live in infamy.”

Stratton was among the last remaining survivors who bore witness to the unprovoked surprise attack that killed 2,335 U.S. military personnel — most of them sailors — and drew the United States into World War II.

Released in 2016 by HarperCollins Publishers, “All the Gallant Men” describes in vivid detail the horrors of the attack. But for the courageous stand taken by fellow sailor Joe George — who, from aboard the neighboring supply ship USS Vestal tossed a rope to save George and five other sailors despite his captain’s orders to cut the rope and flee — all of the trapped sailors would have perished in flames.

But they didn’t die, at least not all of them. Alvin Dvorak, the last in line to cross, died that Christmas Day. The others — Harold Kuhn, Russell Lott, Earl Riner, Loren Bruner, and Stratton — were all badly burned but survived the ordeal.

“George threw my dad a line,” Randy said. “It was the only way to get him off the ship. They were trying to get under way because the Arizona was exploding and the captain told George to cut the line and get out of the way. ‘I’m not going to let these guys die,’ George said. And they came across.

“If not for him, four generations of the Stratton family would not be here.”

Randy kept in touch with George’s wife, Thema, by telephone for 13 years prior to her death in 1996, phoning her each Dec. 7 on the anniversary of the bombing to acknowledge his gratitude for what her husband did for his father.

“My dad never met Joe, and Joe never knew if any of the guys lived or died,” Randy said. “We had to fight for 15 years to get him the Bronze Star because the Navy would not budge.”

Following his rescue, Stratton faced a lengthy and painful battery of skin grafts as he recovered from burns over 65 percent of his body.

“He was burned up really bad,” Randy said. “He had skin grafts all over his hands and arms, and it burned half his ear off.”

Yet he survived. Others weren’t as lucky.

“They were all on the sky control platform, one deck above the captain’s quarters,” Randy said. “All they found of the captain was his class ring welded to metal. It (the bombing) vaporized him.”

Memorials like the Donald G. Stratton Bridge, USS Arizona Survivor in Colorado Springs and a computerized photo display inside the airport terminal in Colorado Springs pay tribute to Stratton’s dogged determination to stay alive to serve his country another day. One year after his ordeal on the Arizona, he re-enlisted in the Navy and served on a destroyer, seeing action in invasions of the Philippines and Okinawa.

Additional tributes include a possible movie in the works based on Stratton’s book and a documentary video, “The Unsung Hero of Pearl Harbor,” narrated by actor Gary Sinise, that recounts the heroic accounts of Stratton and George.

As a devoted husband and father, Stratton left a legacy on the home front matched his heroics at sea as far as Randy was concerned.

“He traveled a lot and stayed on the sea, (but) was always at all my ballgames,” he said. He didn’t miss a game. He was a strong influence in my life with all the things he taught me at an early age.

Stratton made it known to Dayre Williams, funeral director at Williams Funeral Home in Red Cloud, that he wanted to be buried in Red Cloud rather than at sea off the USS Arizona. Randy explained it was because his father wanted to buried alongside family members, even though he regarded his fellow sailors as family.

“Dad had the option to be buried off the Arizona, but said, ‘I’ve been cremated once at sea, I’m not going to be cremated twice,’” he said.

Williams said it is unlikely Stratton’s story will be forgotten anytime soon, given the numerous tributes and coverage his story has received in the media in recent years.

“He’s made a lasting impact on so many lives,” Williams said. “He’ll be remembered for his honesty and dedication.”