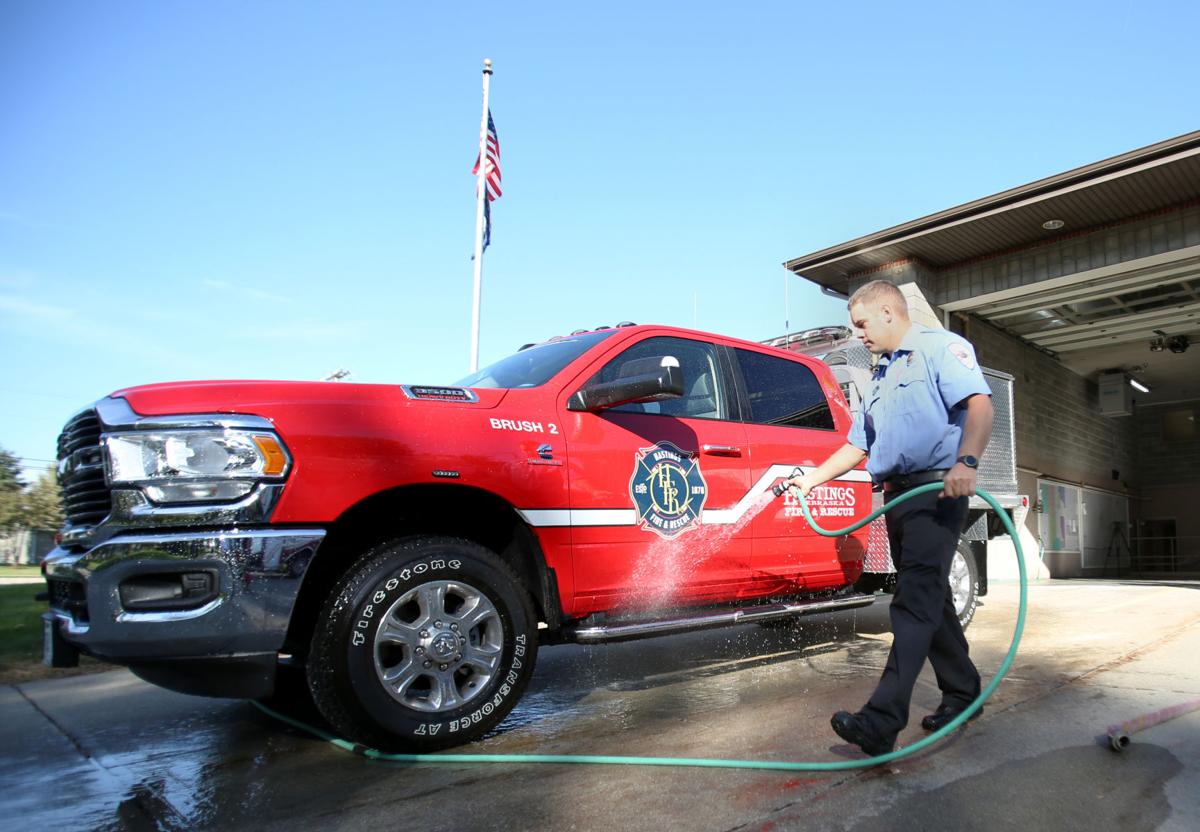 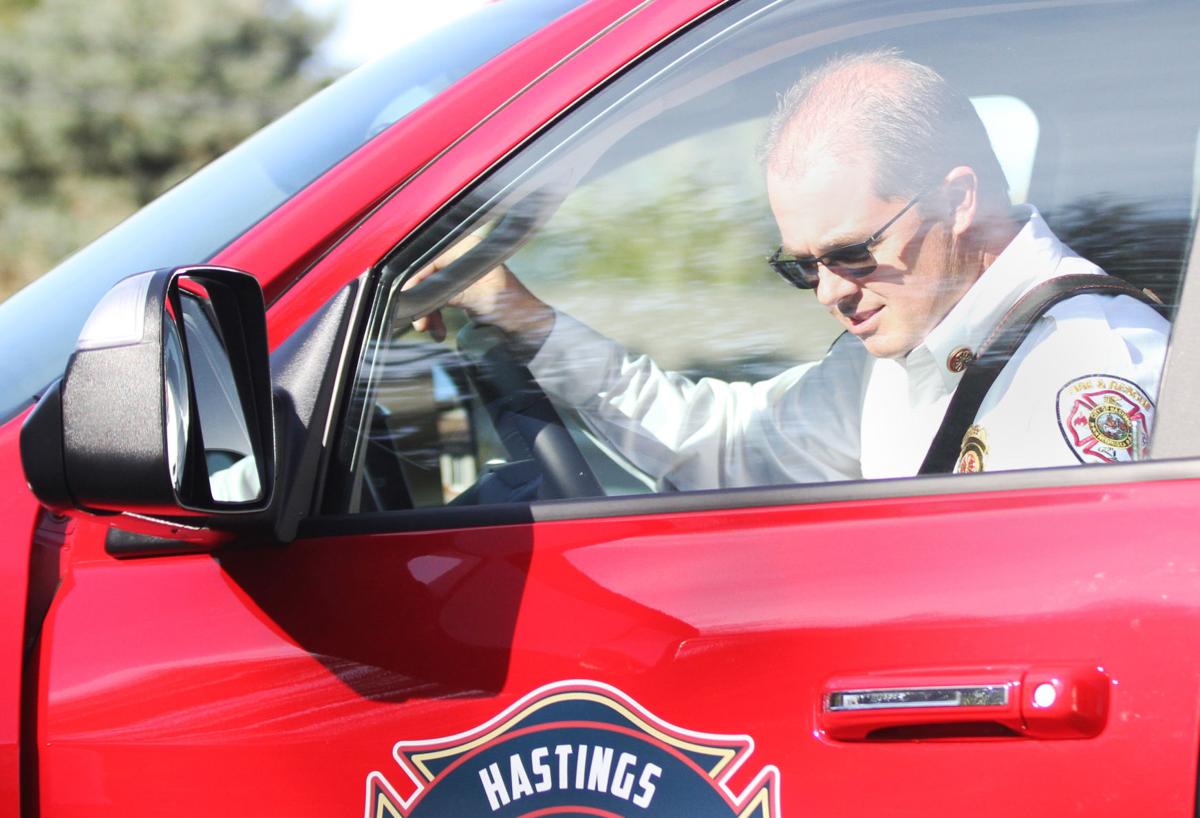 Fire Chief Brad Starling rides in Brush 2 as it is pushed inside the Lincoln Park Fire Station during the Hastings Fire and Rescue pushing in ceremony for the new vehicle Wednesday. 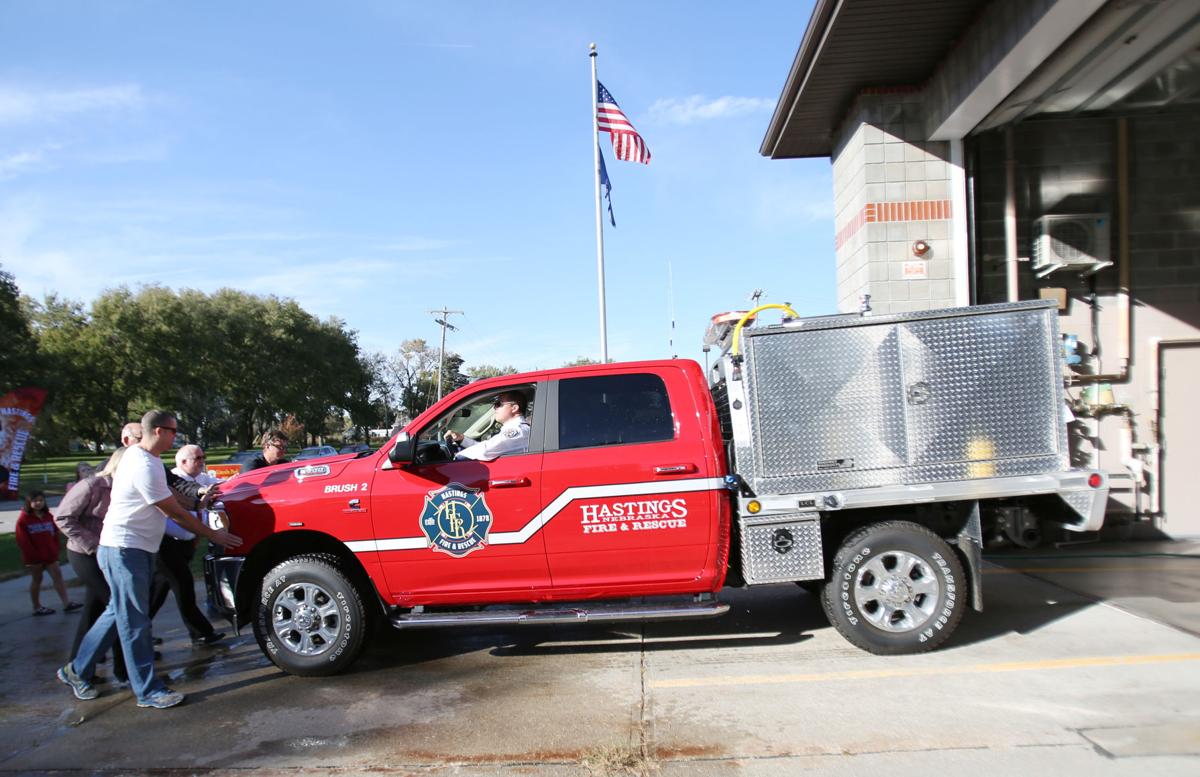 Brush 2, the newest Hastings Fire and Rescue apparatus, is pushed inside the Lincoln Park Fire Station during a pushing in ceremony Wednesday. 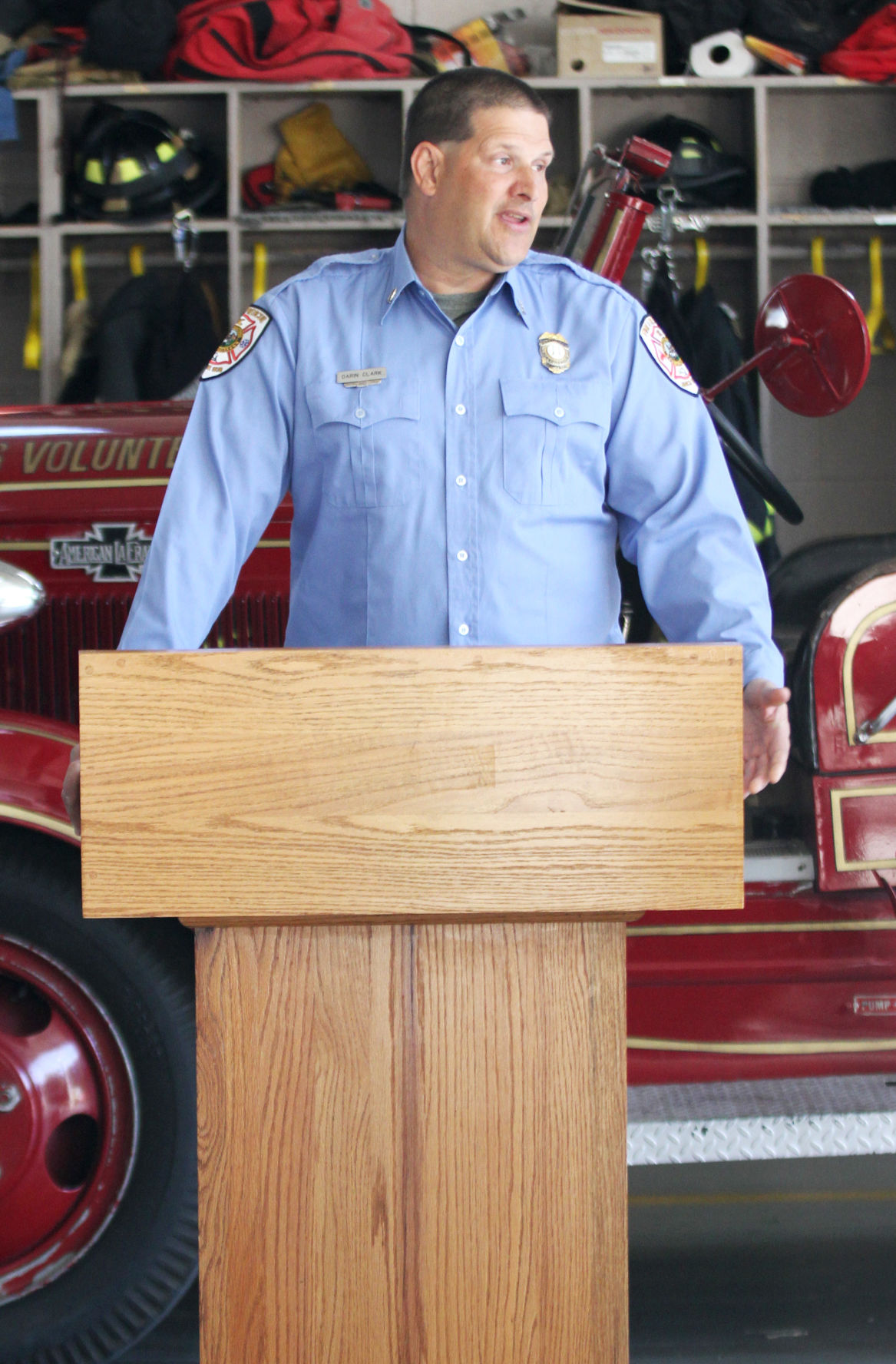 Hastings firefighters welcomed a new fire vehicle into the station with a traditional pushing in ceremony on Wednesday at Lincoln Park Station.

Capt. Darin Clark said firefighters honor many traditions in their service to the community, including painting fire engines red and tolling the bells for firefighter funerals.

“Fire service is full of traditions,” he said.

Hastings Fire and Rescue’s newest apparatus is Brush 2, a 2019 Dodge Ram with four-wheel drive, a 160-gallon water tank, a water pump with Class A firefighting foam capabilities, equipment for fighting wildland fires and advanced life support medical equipment for its role as a paramedic intercept vehicle to assist neighboring departments with critical patients being transported.

Clark invited the public to participate in the ceremony, beginning with hosing and drying off the vehicle.

He said this recalls a time when a new fire horse would be given a bath to welcome the new and retire the old. Along with the rest of the truck, particular attention was paid to the tires.

Clark said washing the tires harkens back to the hub and spoke era where washing the wooden wheels kept them from drying out after a fire along with cleaning out the horse-drawn wagon before pulling into the station.

“Firefighters had to wash down the wheels to keep them from cracking,” he said.

Next, firefighter Jarred Hackler filled the tank as a symbol of giving Brush 2 the tools needed to perform its new responsibility to protect life and property.

Once the tank was filled, firefighters and members of the public helped push the vehicle into the station.

“Since horses could not easily push equipment into the stations after a call, firefighters had to push the apparatus back in,” Clark said. “Today, we continue to celebrate this tradition with the help of a driver in the seat and the engine’s transmission in reverse.”

Inside the station, Clark explained that local clergy historically would bestow blessings upon a horse for long life, strength, good health and to ward off any evil spirits.

Eddie Goff, who serves chaplain for the fire and police departments and as pastor of New Hope Baptist Church, offered a prayer of protection over the vehicle and the firefighters using it.

With the prayer complete, Clark reported to Chief Brad Starling that the equipment had been mounted, the tank filled and firefighters trained for its use.

Starling then radioed in to dispatch to declare Brush 2 in service.

Clark said the pushing in ceremony helps the public and new recruits better understand the department.

“I think it’s important for the newer people coming in to understand the history of fire service,” he said.

Brush 2 is the first fire vehicle to display the department’s new logo, which will be unveiled in a transition over the upcoming year.

The vehicle cost about $77,000 with around $10,000 of new equipment and about $30,000 in repurposed gear. Starling said the expense was included in the budget last year and approved by the Hastings City Council.

Hackler, a member of the apparatus committee, said it took the five members of the committee about six to eight months to research and order the best vehicle with the capabilities desired. It will replace a 2002 Ford Explorer that had been used as a chase vehicle by the department, but didn’t offer any firefighting capabilities.

Starling said inviting the public to the ceremony and offering an open house helps foster goodwill in the community.

“It may not be necessary, but it’s important to us as a department to give the public an opportunity to come out and see how their tax dollars are spent,” he said.