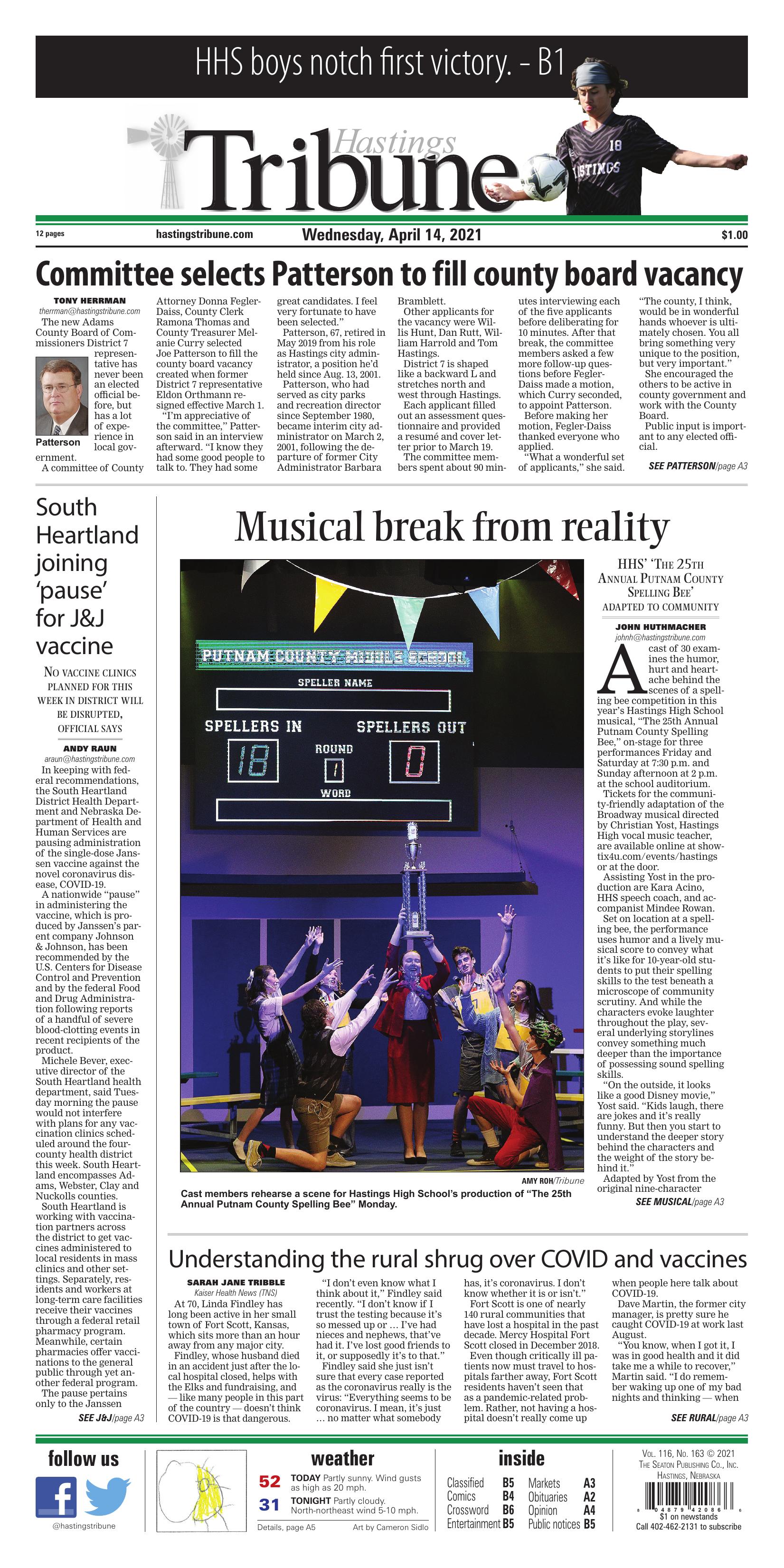 Joe Patterson, who retired as Hastings city administrator in May 2019, will serve District 7 on the Adams County Board of Commissioners.

The new Adams County Board of Commissioners District 7 representative has never been an elected official before, but has a lot of experience in local government.

“I’m appreciative of the committee,” Patterson said in an interview afterward. “I know they had some good people to talk to. They had some great candidates. I feel very fortunate to have been selected.”

Other applicants for the county board vacancy were Willis Hunt, Dan Rutt, William Harrold and Tom Hastings.

District 7 is shaped like a backward L and stretches north and west through Hastings.

Each applicant filled out an assessment questionnaire and provided a resumé and cover letter prior to March 19.

The committee members spent about 90 minutes interviewing each of the five applicants before deliberating for 10 minutes. After that break, the committee members asked a few more follow-up questions before Fegler-Daiss made a motion, which Curry seconded, to appoint Patterson.

Before making her motion, Fegler-Daiss thanked everyone who applied.

“What a wonderful set of applicants,” she said. “The county, I think, would be in wonderful hands whoever is ultimately chosen. You all bring something very unique to the position, but very important.”

She encouraged the others to be active in county government and work with the County Board.

Public input is important to any elected official.

“Obviously as elected officials we know how important it is to listen to those who elected us,” Fegler-Daiss said. “I hope everyone will continue to be interested in what’s going on in your county government.”

In retirement from the city, Patterson increased his involvement as commissioner for USA Softball of Nebraska, a position he has held since 1998.

Answering a question from Thomas about the time commitment of his role as state softball commissioner, Patterson said he sets his own schedule.

He said during the summer, when the county commissioners hear budget requests, he is busy during the weekends.

Patterson believes he brings a familiarity of issues through his background with city government.

“There are a lot of issues that transcend the boundaries of the city into the county and vice versa,” he said. “In that respect I’ll be able to have some background knowledge that hopefully will help in working through issues.”

Serving on the County Board is a partisan position. Patterson is a registered Republican.

Patterson has served on a lot of boards with other county board members. The only commissioner he hadn’t met was Harold Johnson, who was elected in 2020.

“I look forward to meeting him next week, if not before,” Patterson said.

Patterson will be sworn in prior to the county board’s next regular meeting, on April 20.

“I’ve been retired from the city government for a couple of years and have been looking for something to fill a little bit more of my time,” he said. “This seemed to be in the same line, in a way, of what I’ve been doing.”

This will be a new life experience, Patterson said.

“I’m excited about it and looking forward to it,” he said. “I think I’ll be right back into dealing with how the state may treat subdivisions of government and dealing with those issues.”

Patterson said he wasn’t sure at this point whether he would run to keep the seat. Running for election will depend on how the first year goes and whether he feels like he is making a difference.

A cast of 30 examines the humor, hurt and heartache behind the scenes of a spelling bee competition in this year’s Hastings High School musical, “The 25th Annual Putnam County Spelling Bee,” on-stage for three performances Friday and Saturday at 7:30 p.m. and Sunday afternoon at 2 p.m. at the school auditorium.

Tickets for the community-friendly adaptation of the Broadway musical directed by Christian Yost, Hastings High vocal music teacher, are available online at showtix4u.com/events/hastings or at the door.

Set on location at a spelling bee, the performance uses humor and a lively musical score to convey what it’s like for 10-year-old students to put their spelling skills to the test beneath a microscope of community scrutiny. And while the characters evoke laughter throughout the play, several underlying storylines convey something much deeper than the importance of possessing sound spelling skills.

“On the outside, it looks like a good Disney movie,” Yost said. “Kids laugh, there are jokes and it’s really funny. But then you start to understand the deeper story behind the characters and the weight of the story behind it.”

Adapted by Yost from the original nine-character version on Broadway, this 30-character version replaces offensive lyrics deemed inappropriate for a high school performance with less edgy messages that cater to the strengths of cast members. These changes, coupled with the expansion of cast, give the revamped product a unique flavor that Yost believes will resonate with the local community.

“Sometimes you need to take a show and adapt it to fit your community standards,” he said “We’ve made sure to do that, using these changes to bring more comedic light as a whole. We got creative with it.

“If you were going to go see this show on Broadway, then come and see it here, it’s the same storyline. But you’re going to see a whole bunch of different things you wouldn’t see, even with a $250 front-row seat in New York.” 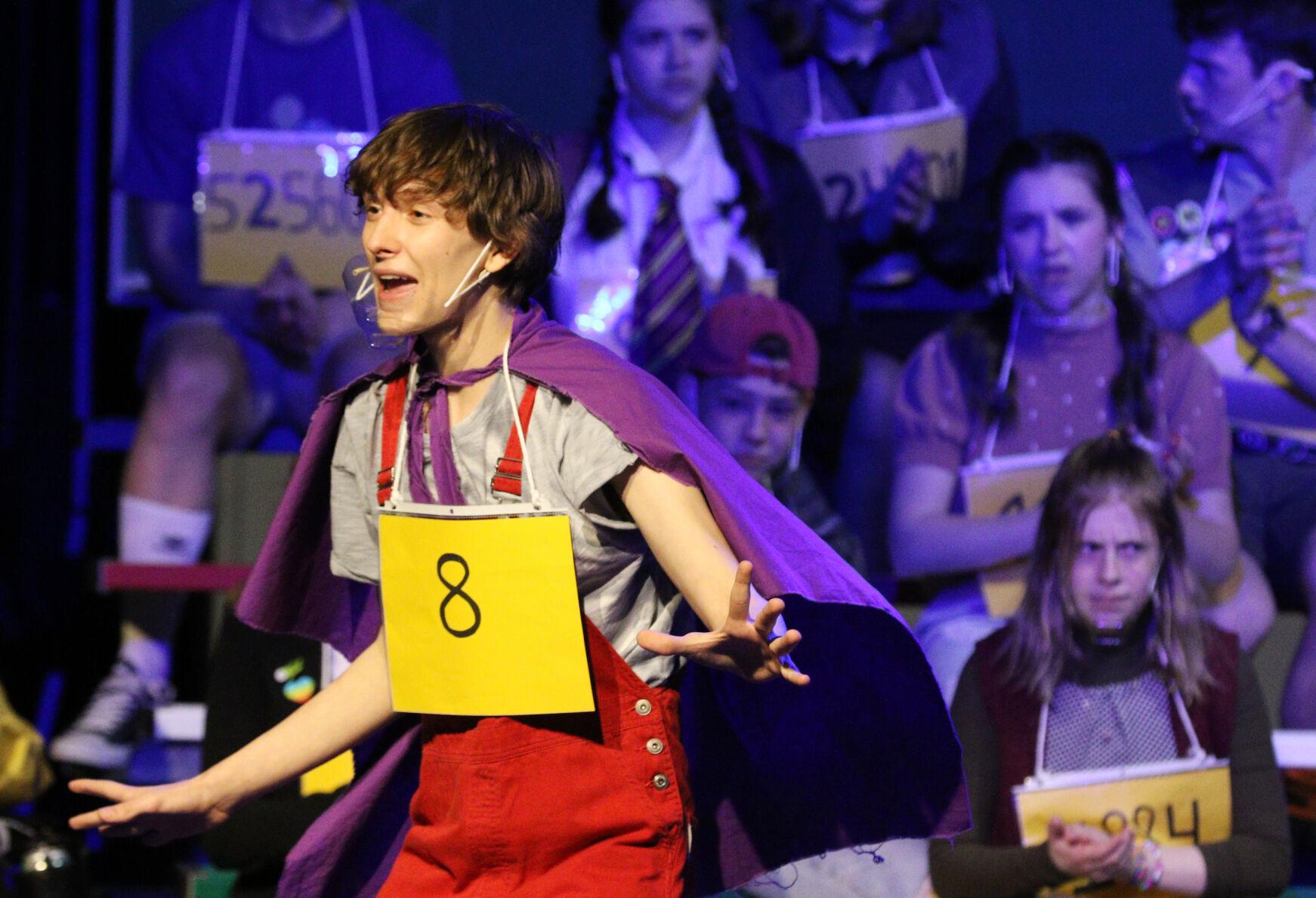 Endeavoring to create an immersive experience with the performance, Yost said he wants audience members to feel as though they are truly present at the event. In a real world wrought with chaos, he wants the show to offer those who attend a much-needed break from the novel coronavirus, politics, violence and other everyday stressors.

“We want people to come to a live event but then on top of that be a part of a live event,” he said. “This is something that is really going to fill the community’s hearts when they come to watch it.

“Our ushers are going to be spellers. We’ll have four audience volunteers come up on stage to participate in the actual spelling bee. We’ll give them real words, real definitions and real sentences. As long as they spell the word, they stay in the show.”

Unlike most musicals, multiple lead characters drive the show, each with its own unique history. With coronavirus still ever-present, presenting a show with lead roles shared equally among students makes the possibility of having to replace lead characters far less stressful for both cast members and him, Yost said.

Acino said the challenge of taking on such a production is finding enough strong characters to capably fill the roles. The cast has proven equal to the challenge, she said.

“I’ve been involved in about 25 musicals, and I can’t think of one that has had this many balanced, strong, amazing kids,” she said.

Diverse topic lines create opportunities for discussion afterward, Yost said. Featured among the diverse cast of characters are: a self-appointed spelling bee narrator portrayed by senior Linnea Howie; a nerdy, highly competitive speller played by senior Jonah Smith who regards his nasal difficulties as admirable; and a girl played by senior Hannah Gammill who is chastised by her classmates for having two dads.

“There are so many little life lessons in this show,” Acino said. “It appeals to all ages. It’s for everybody.”

Yost said the fast-paced show is likely to seem much quicker than its running time of about one hour, 45 minutes. Ongoing humor and a highly involved musical finale will send audience members out on a high note, he said.

“In a lot of musicals, most of the music is in the first act,” he said. “This show is completely backwards. The back half has three times the amount of music, so once the show gets going, it’s a ball that picks up speed all the way to the end.” 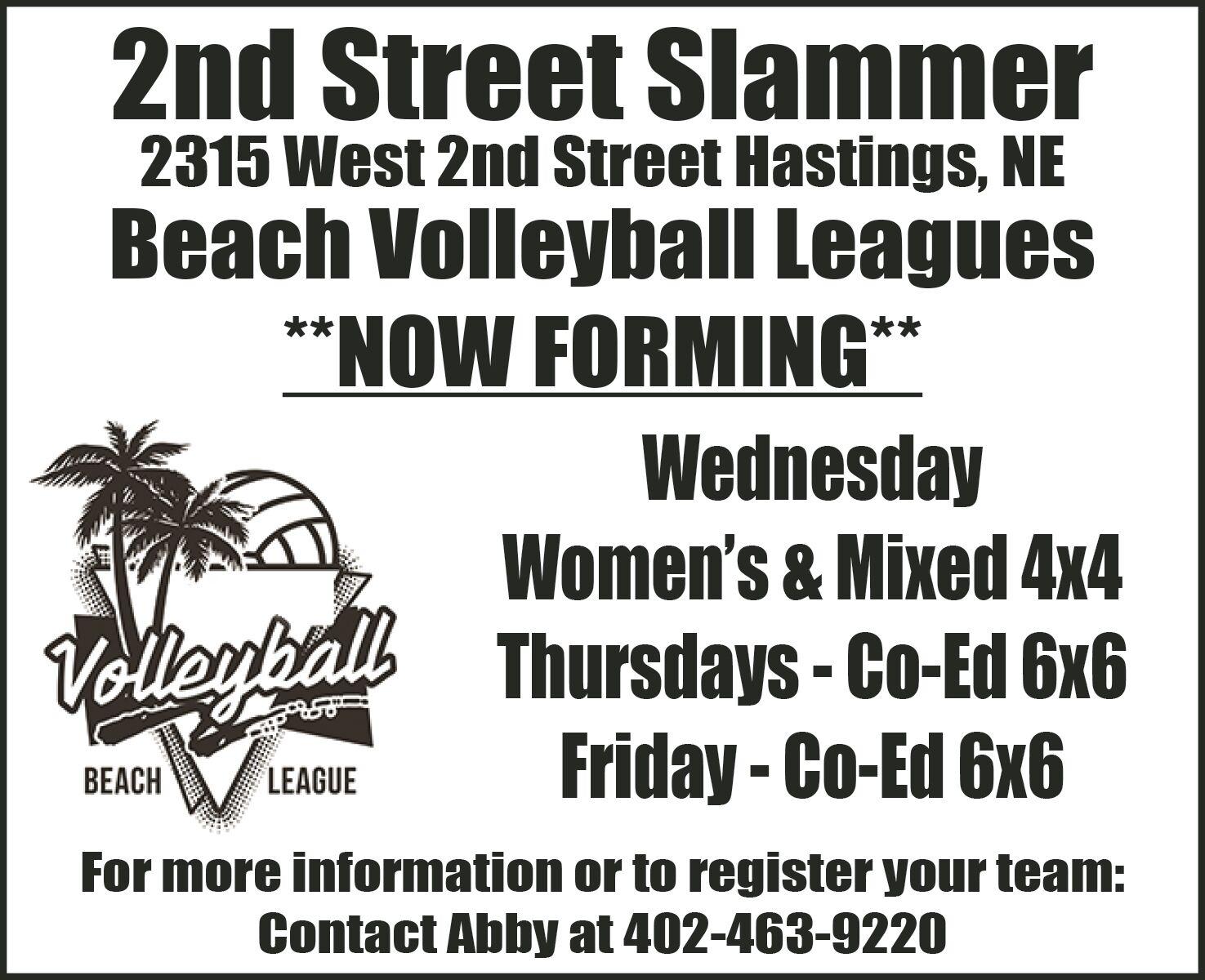 In keeping with federal recommendations, the South Heartland District Health Department and Nebraska Department of Health and Human Services are pausing administration of the single-dose Janssen vaccine against the novel coronavirus disease, COVID-19.

A nationwide “pause” in administering the vaccine, which is produced by Janssen’s parent company Johnson & Johnson, has been recommended by the U.S. Centers for Disease Control and Prevention and by the federal Food and Drug Administration following reports of a handful of severe blood-clotting events in recent recipients of the product.

South Heartland is working with vaccination partners across the district to get vaccines administered to local residents in mass clinics and other settings. Separately, residents and workers at long-term care facilities receive their vaccines through a federal retail pharmacy program. Meanwhile, certain pharmacies offer vaccinations to the general public through yet another federal program.

The pause in administering the Janssen vaccine is intended to be temporary; CDC and FDA officials who conducted a news media briefing Tuesday morning said they expect it to be just a matter of days. But the pause will allow time for thorough review and investigation of the blood-clotting problem, which as of Tuesday had been reported in just six individuals out of more than 6.8 million across the United States who have received the Janssen vaccine.

The state Department of Health and Human Services is letting local health departments, health care providers and pharmacies across Nebraska know about the pause. Meanwhile, anyone who has received the Janssen vaccine and develops a severe headache, abdominal pain, leg pain or shortness of breath within three weeks after the shot should contact their health care provider.

Any potential adverse reactions to vaccines should be reported to the CDC through its vaccine adverse events reporting system known as VAERS. This system can be accessed at https://vaers.hhs.gov.

According to a joint statement from CDC and FDA issued early Tuesday morning, the blood-clotting problem that has been reported in six individuals involves a type of clot known as a cerebral venous sinus thrombosis, or CVST, occurring in combination with a condition called thrombocytopenia, which leaves the patient with low levels of blood platelets. All six cases occurred in women ages 18-48, with symptoms coming on six to 13 days following vaccination.

“Treatment of this specific type of blood clot is different from the treatment that might typically be administered,” CDC and FDA said in their statement. “Usually, an anticoagulant drug called heparin is used to treat blood clots. In this setting, administration of heparin may be dangerous, and alternative treatments need to be given.”

CDC plans to convene a meeting of its Advisory Committee on Immunization Practices Wednesday for further review of the cases in question and assessment of their potential significance. FDA will review the CDC committee’s analysis as it conducts its own investigation.

According to South Heartland’s COVID-19 vaccine statistical dashboard, at least 747 doses of the Janssen vaccine have been administered in the health district since the product gained federal authorization for emergency use in the United States on Feb. 27. The vaccine currently is approved for use in individuals age 18 and up.

In a news release of its own Tuesday morning pertaining to the Janssen vaccine pause, the Nebraska Department of Health and Human Services said officials of the Douglas County Health Department and Nebraska Medicine in Omaha had consulted April 8 with CDC and FDA concerning a rare and severe type of blood clot diagnosed in a Nebraska patient, then related that diagnosis to the federal-level decision to pause Janssen vaccinations.