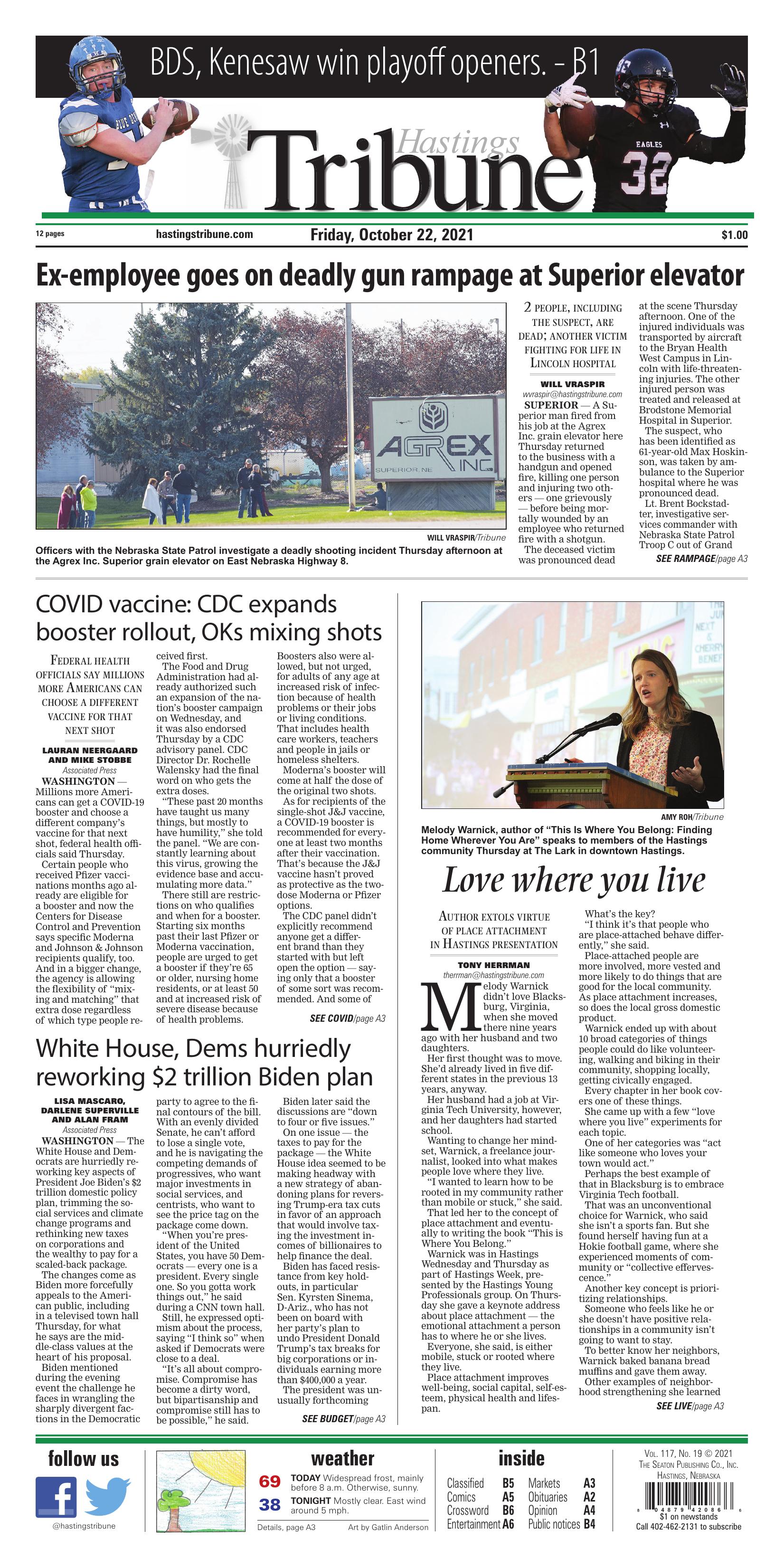 The Agrex Inc. grain elevator at Superior was the scene of a deadly shooting incident Oct. 21.

A man fired Thursday from his job at Superior’s Agrex Inc. grain elevator returned with a gun and opened fire inside the office, shown here.

SUPERIOR — A Superior man fired from his job at the Agrex Inc. grain elevator here Oct. 21 returned to the business with a handgun and opened fire, killing two people and injuring others before being mortally wounded by an employee who returned fire with a shotgun.

Nelson was pronounced dead at the scene of the shooting in Superior. Koepke was flown to Bryan Health West Campus in Lincoln where he later died.

Both were employees of Agrex, as were the other occupants of the office when Max Hoskinson, 61, of Superior entered the business with a handgun and opened fire.

While Roby said the motive and other details of the incident are under investigation, previous information indicated Hoskinson had been fired from his job at Agrex before returning with the gun about 2 p.m.

He shot three people before an Agrex employee retrieved a shotgun from an office and returned fire, striking Hoskinson.

Hoskinson was taken by ambulance to Brodstone Memorial Hospital in Superior where he was pronounced dead.

NSP was dispatched to assist the Nuckolls County Sheriff’s Office and Superior Police Department with their response to the active-shooter incident.

The names of other individuals involved in the incident are being withheld at this time due to the ongoing nature of the investigation. Additional information will be released when possible.

The Superior and Nelson fire departments also responded to the scene. The State Patrol is investigating the incident with assistance from the local law enforcement agencies and the Nuckolls County Attorney’s Office.

Lt. Brent Bockstadter, investigative services commander with Nebraska State Patrol Troop C out of Grand Island said investigators collected and documented evidence at the scene, including a 3-D diagram of the scene. Autopsies likely are to be scheduled at a later time, along with follow-up interviews with the witnesses once the immediate trauma has dissipated.

NSP Lt. Michael Korte said the shooting affected the entire community and surrounding areas due to the importance of the business.

“Our hearts go out to the community,” he said. “There’s no busier place than an elevator in harvest season.”

Melody Warnick, author of “This Is Where You Belong: Finding Home Wherever You Are” speaks to members of the Hastings community Oct. 21 at The Lark in downtown Hastings.

Small groups discuss ways for people to engage more in the community Thursday at The Lark.

M elody Warnick didn’t love Blacksburg, Virginia, when she moved there nine years ago with her husband and two daughters.

Her first thought was to move. She’d already lived in five different states in the previous 13 years, anyway.

Her husband had a job at Virginia Tech University, however, and her daughters had started school.

Wanting to change her mindset, Warnick, a freelance journalist, looked into what makes people love where they live.

“I wanted to learn how to be rooted in my community rather than mobile or stuck,” she said.

That led her to the concept of place attachment and eventually to writing the book “This is Where You Belong.”

Warnick was in Hastings Oct. 20 and 21 as part of Hastings Week, presented by the Hastings Young Professionals group. On Oct. 21 she gave a keynote address about place attachment — the emotional attachment a person has to where he or she lives.

Everyone, she said, is either mobile, stuck or rooted where they live.

“I think it’s that people who are place-attached behave differently,” she said.

Place-attached people are more involved, more vested and more likely to do things that are good for the local community.

As place attachment increases, so does the local gross domestic product.

Warnick ended up with about 10 broad categories of things people could do like volunteering, walking and biking in their community, shopping locally, getting civically engaged.

Every chapter in her book covers one of these things.

She came up with a few “love where you live” experiments for each topic.

One of her categories was “act like someone who loves your town would act.”

Perhaps the best example of that in Blacksburg is to embrace Virginia Tech football.

That was an unconventional choice for Warnick, who said she isn’t a sports fan.

But she found herself having fun at a Hokie football game, where she experienced moments of community or “collective effervescence.”

Another key concept is prioritizing relationships.

Someone who feels like he or she doesn’t have positive relationships in a community isn’t going to want to stay.

To better know her neighbors, Warnick baked banana bread muffins and gave them away.

Other examples of neighborhood strengthening she learned about while researching her book included porch parties in Indianapolis and a woman in Austin, Texas, who had a picnic table in her front yard.

Not every experiment worked, but she was surprised how well they did.

She recalled going on a bike ride in Blacksburg recently with one of her daughters during which Warnick found herself “washed in well-being.”

On Oct. 20, Warnick met at Blue Fork Kitchen restaurant with a group of VIP stakeholders including members of the Key Society and Hastings City Council, the leadership team for Hastings Young Professionals, and 30 Under 30ish award recipients.

Warnick spoke at the VIP event about her next book, “If You Could Live Anywhere,” which includes a section about Hastings and will be available in July 2022.

“We’re really excited about that,” Esch said in an interview after the roundtable discussions.

“Everything was designed to complement each other, and so it was really nice to have an open dialogue with Melody really leading the conversation, based on what she’s found in her findings across the country as she wrote her book,” Esch said. “I have been really pleased with the conversation amongst the group and the amount of people that showed up and new faces that we saw at these events. I’m really pleased with how everything went. I think bringing Melody in was definitely the right decision.”

Esch encouraged people to join the “Hastings Is Where You Belong” Facebook group.

“We intentionally have no agenda for what comes after this because we hope people who participated in the conversations last night, this morning and this afternoon have an idea for what comes next,” she said Oct. 21. “Joining the Facebook group is our way to keep the conversation going. We are anticipating we will do something in person to kind of reflect on what we thought about and what we learned, sometime in November. But really the community, the people who chose to show up and invest their time in the conversation, those are the people that are going to decide what comes next.”