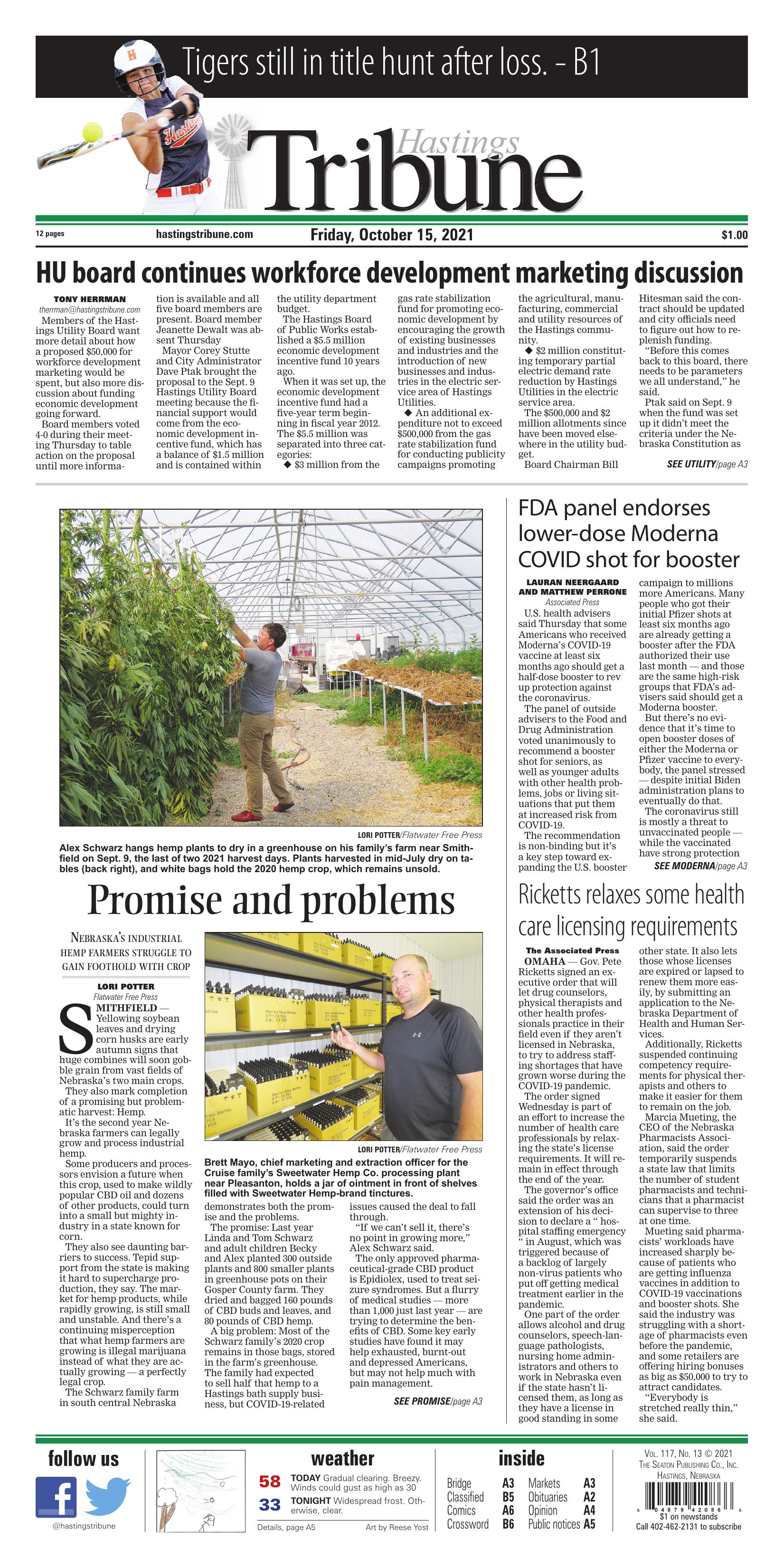 Members of the Hastings Utility Board want more detail about how a proposed $50,000 for workforce development marketing would be spent, but also more discussion about funding economic development going forward.

Board members voted 4-0 during their meeting Thursday to table action on the proposal until more information is available and all five board members are present. Board member Jeanette Dewalt was absent Thursday

Mayor Corey Stutte and City Administrator Dave Ptak brought the proposal to the Sept. 9 Hastings Utility Board meeting because the financial support would come from the economic development incentive fund, which has a balance of $1.5 million and is contained within the utility department budget.

The Hastings Board of Public Works established a $5.5 million economic development incentive fund 10 years ago.

When it was set up, the economic development incentive fund had a five-year term beginning in fiscal year 2012. The $5.5 million was separated into three categories:

The $500,000 and $2 million allotments since have been moved elsewhere in the utility budget.

Board Chairman Bill Hitesman said the contract should be updated and city officials need to figure out how to replenish funding.

“Before this comes back to this board, there needs to be parameters we all understand,” he said.

Ptak said on Sept. 9 when the fund was set up it didn’t meet the criteria under the Nebraska Constitution as well as a 1976 Nebraska Supreme Court case.

He said on Thursday using $50,000 for workforce development marketing is legal under state statute. When it comes to funding economic development there are legal parameters that need to be discussed.

Councilman Shawn Hartmann, who is a liaison to the utility board as well as a city representative on the HEDC board, said the need for workforce development marketing is driven by a lack of workforce.

“When we have situations where there’s a large closure in one of our neighboring communities, we really don’t have a vehicle, way or funding to try to promote this city as a viable place to come even though we all know there’s a lot of job opportunities here,” he said.

Retirees composed the largest sector of the turnover with 28 individuals. Those 28 retirees averaged 30.5 years of employment with the utility department.

“That indicates to me there is some significant time being spent,” Johnson said. “I hope the inference is we’re not forcing people out. They spent quality time here.”

The utility department now sits at around 180 employees.

Material availability continues to be an issue.

“It seems like everything’s in some port or some cargo ship in the ocean, waiting to be delivered,” Electric Distribution Superintendent Doug Baumgart said.

Alex Schwarz hangs hemp plants to dry in a greenhouse on his family’s farm near Smithfield on Sept. 9, the last of two 2021 harvest days. Plants harvested in mid-July dry on tables (back right), and white bags hold the 2020 hemp crop, which remains unsold.

Tom and Becky Schwarz work Sept. 9 to cut and load 2021 hemp plants on their farm near Smithfield. The hemp was taken to a nearby on-farm greenhouse to dry. A farm driveway separated the two long rows of hemp from a field of certified organic soybeans.

Sweetwater Hemp Co. near Pleasanton has the largest ice water plant in the United States, but its two processing lines are operating just two to three days per week. Chief Marketing and Extraction Officer Brett Mayo said demand for CBD and CBG products is limited because big-box stores won’t buy them so long as regulations vary from state to state.

They also mark completion of a promising but problematic harvest: Hemp.

Some producers and processors envision a future when this crop, used to make wildly popular CBD oil and dozens of other products, could turn into a small but mighty industry in a state known for corn.

They also see daunting barriers to success. Tepid support from the state is making it hard to supercharge production, they say. The market for hemp products, while rapidly growing, is still small and unstable. And there’s a continuing misperception that what hemp farmers are growing is illegal marijuana instead of what they are actually growing — a perfectly legal crop.

The Schwarz family farm in south central Nebraska demonstrates both the promise and the problems.

The promise: Last year Linda and Tom Schwarz and adult children Becky and Alex planted 300 outside plants and 800 smaller plants in greenhouse pots on their Gosper County farm. They dried and bagged 160 pounds of CBD buds and leaves, and 80 pounds of CBD hemp.

A big problem: Most of the Schwarz family’s 2020 crop remains in those bags, stored in the farm’s greenhouse. The family had expected to sell half that hemp to a Hastings bath supply business, but COVID-19-related issues caused the deal to fall through.

“If we can’t sell it, there’s no point in growing more,” Alex Schwarz said.

The only approved pharmaceutical-grade CBD product is Epidiolex, used to treat seizure syndromes. But a flurry of medical studies — more than 1,000 just last year — are trying to determine the benefits of CBD. Some key early studies have found it may help exhausted, burnt-out and depressed Americans, but may not help much with pain management.

The Schwarzes and Nebraska farmers like them are growing the raw material that is processed into CBD oils, creams, candies, dietary supplements, lotions and scores of other products.

Growing this crop means dealing with regulations that corn and soybean farmers wouldn’t dream of.

For example: Hemp can be legally grown and harvested here only if levels of THC, the psychoactive ingredient in marijuana, is 0.3% or lower. Licensed growers must contact the Nebraska Department of Agriculture to have plant samples tested before harvest. Hemp testing even a smidge too high must be destroyed as a Nebraska farmer watches his or her harvest literally go up in smoke.

It’s not all doom and gloom. The Schwarzes are getting better at growing. They raised fewer plants this year, but expect yields similar to 2020 because of lessons the Gosper County farmers learned in year one.

A decision about how much hemp to plant next year will be made after the farm’s other 2021 crops, mostly corn and soybeans, are harvested.

The U.S. Congress passed a farm bill in 2018 that made clear that low-THC hemp plants and products aren’t controlled substances.

The Nebraska Legislature then passed a law, signed by Gov. Pete Ricketts in 2019, that legalized hemp farming.

By last year, 84 Nebraska growers were licensed to raise hemp. The area where the crop can legally grow quadrupled in 2021. Nearly 900 acres of Nebraska farmland and 70,000 indoor square feet is now licensed.

While growing, it’s tiny. Colorado farmers planted nearly 20 times more hemp than Nebraska did this year, according to the Farm Service Agency.

And corn is still king in the Cornhusker State. Nebraska growers planted roughly 10 million acres of it this year.

Still, you can still find spots where rural Nebraska entrepreneurs are trying to harness hemp’s potential, like at a 16,000-square-foot plant near Pleasanton.

There, the Sweetwater Hemp Company uses a technique called ice-water extraction to pull CBD and CBG out of legally grown hemp plants. It’s the largest processing plant of its kind in the United States.

“We aren’t running even close to capacity,” he said. “... We are in full sales mode, retail and wholesale,” he said.

Two-thirds of Sweetwater Hemp tinctures, gummies and topical products are sold through the company’s website. The rest are sold at places like chiropractor’s offices and clinics in Grand Island, Hastings and Kearney.

The Schwarzes believe industry growth depends on a state focus to produce fiber so the whole hemp plant can be used, not just buds and leaves. They think hemp has soil benefits and could work well in their crop rotations.

But Sweetwater Hemp’s Mayo said businesses like his and farmers like the Schwarzes aren’t receiving enough support from the state.

“This could be a thing that could make the state a lot of money. They’re limiting what we have and could grow in the state that could fund schools, roads, law enforcement and other things,” Mayo said.

Steve Wellman, director of the Nebraska Department of Agriculture, said hemp might qualify for existing state economic development incentives available for many types of businesses, but said he’s unaware of any specific to the crop.

He said he has seen reports from states where hemp products have long been legally produced. Growers there are also sitting on product, he said.

“With a small market, it’s easy to overproduce,” Wellman said. “It’s hard to get investments. Profitability will drive the decisions.”

It’s too early to judge the potential for hemp-related products, said Mark Wilkins, director of the University of Nebraska-Lincoln Industrial Agriculture Products Center. The novelty of legalization means there’s a lack of research.

And all of that is slowed because of the crop’s more illicit analog.

“It’s not dangerous,” UNL’s Wilkins said about industrial hemp products. “A lot of it is that it’s still viewed like marijuana. So you get these weird rules that you’d never get with corn or soybeans. It’s never going to go forward with those in place.”