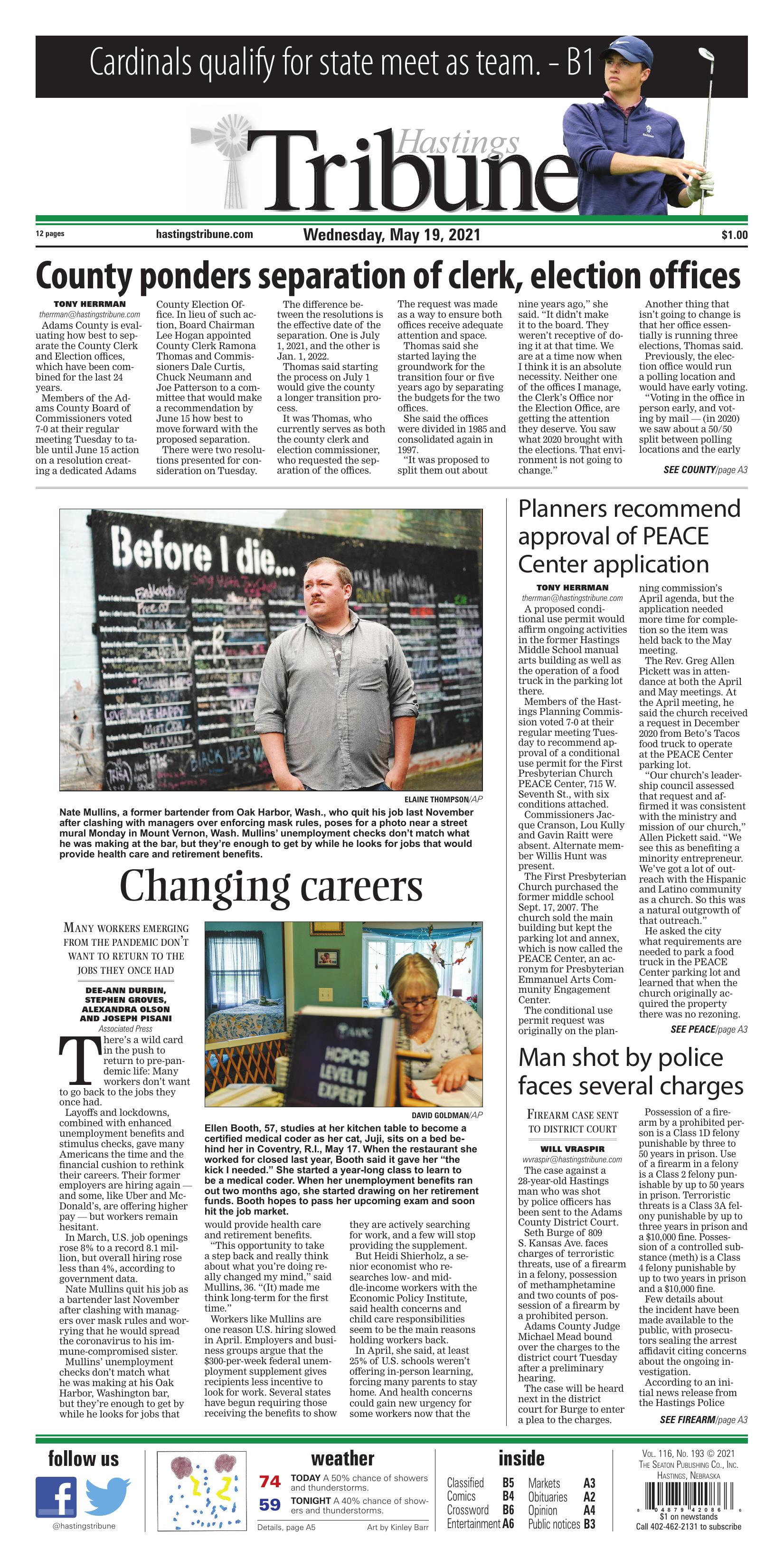 Adams County is evaluating how best to separate the County Clerk and Election offices, which have been combined for the last 24 years.

Members of the Adams County Board of Commissioners voted 7-0 at their regular meeting May 18 to table until June 15 action on a resolution creating a dedicated Adams County Election Office. In lieu of such action, Board Chairman Lee Hogan appointed County Clerk Ramona Thomas and Commissioners Dale Curtis, Chuck Neumann and Joe Patterson to a committee that would make a recommendation by June 15 how best to move forward with the proposed separation.

There were two resolutions presented for consideration on May 18.

The difference between the resolutions is the effective date of the separation. One is July 1, 2021, and the other is Jan. 1, 2022.

Thomas said starting the process on July 1 would give the county a longer transition process.

It was Thomas, who currently serves as both the county clerk and election commissioner, who requested the separation of the offices. The request was made as a way to ensure both offices receive adequate attention and space.

Thomas said she started laying the groundwork for the transition four or five years ago by separating the budgets for the two offices.

She said the offices were divided in 1985 and consolidated again in 1997.

“It was proposed to split them out about nine years ago,” she said. “It didn’t make it to the board. They weren’t receptive of doing it at that time. We are at a time now when I think it is an absolute necessity. Neither one of the offices I manage, the Clerk’s Office nor the Election Office, are getting the attention they deserve. You saw what 2020 brought with the elections. That environment is not going to change.”

Another thing that isn’t going to change is that her office essentially is running three elections, Thomas said.

Previously, the election office would run a polling location and would have early voting.

“Voting in the office in person early, and voting by mail — (in 2020) we saw about a 50/50 split between polling locations and the early voting options — this office is so overwhelmed fulfilling those and we’ve still got to run the polling sites,” she said.

She said if Nebraska was an all-mail election state she might not be making this request.

She said discussions have been going on the last two years with personnel committee members.

“I would stress this is not a new issue,” she said. “This is not the first time this has been proposed.”

“Because she has no space,” Curtis said of Thomas. “Without doing this we can’t alleviate her problems, either one, the cost of election or hiring the help, because if it was kept in house they’ve got no room for the computers, no room for the equipment.”

It was Neumann who suggested a committee be formed.

“This is not a decision to be made lightly,” he said. “I think the personnel committee has done a very good job and Ramona has a very good case.”

Thomas said she would recommend the office have at least a part-time employee in addition to the Election Commissioner. Because that’s an appointed position, however, such staffing decisions are at the discretion of the Board of Commissioners.

Neumann asked whether there was adequate work to warrant a full-time election commissioner.

“I have been working to clean up our street files for 10 years now,” Thomas said. “Before (former county clerk) Chris Lewis left I was given that task. It’s a full-time gig.”

Street files are built into the election system to help outline precinct parts, which dictate what precinct a voter is in.

Thomas said it is building a map of what ballot is allocated to what residence.

Thomas described herself as a full-time election commissioner who manages Clerk’s Office staff.

She said staffing in her office is stretched thin with the duties of both offices, putting the county in a vulnerable position in regard to accounts payable and payroll.

“The time has come,” she said. “This has been discussed several times over a long period of time and now is the right time to do it.”

A proposed conditional use permit would affirm ongoing activities in the former Hastings Middle School manual arts building as well as the operation of a food truck in the parking lot there.

Members of the Hastings Planning Commission voted 7-0 at their regular meeting Tuesday to recommend approval of a conditional use permit for the First Presbyterian Church PEACE Center, 715 W. Seventh St., with six conditions attached.

The First Presbyterian Church purchased the former middle school Sept. 17, 2007. The church sold the main building but kept the parking lot and annex, which is now called the PEACE Center, an acronym for Presbyterian Emmanuel Arts Community Engagement Center.

The conditional use permit request was originally on the planning commission’s April agenda, but the application needed more time for completion so the item was held back to the May meeting.

The Rev. Greg Allen Pickett was in attendance at both the April and May meetings. At the April meeting, he said the church received a request in December 2020 from Beto’s Tacos food truck to operate at the PEACE Center parking lot.

“Our church’s leadership council assessed that request and affirmed it was consistent with the ministry and mission of our church,” Allen Pickett said. “We see this as benefiting a minority entrepreneur. We’ve got a lot of outreach with the Hispanic and Latino community as a church. So this was a natural outgrowth of that outreach.”

He asked the city what requirements are needed to park a food truck in the PEACE Center parking lot and learned that when the church originally acquired the property there was no rezoning.

The property is currently zoned R-1, single-family residential, which doesn’t allow for a community center or assembly/neighborhood use without a conditional use permit.

The R-1 use district is intended for urban single-family residential areas with low to medium population densities. Commercial uses aren’t permitted. Additionally, the use of a restaurant or food truck isn’t addressed at all in the current City Code.

Development services staff felt that with this particular use, and the fact that an assembly/neighborhood use in the R-1 zone already would require a conditional use permit, processing the use of the food truck with a CUP was the best course of action.

The case against a 28-year-old Hastings man who was shot by police officers has been sent to the Adams County District Court.

Adams County Judge Michael Mead bound over the charges to the district court Tuesday after a preliminary hearing.

The case will be heard next in the district court for Burge to enter a plea to the charges.

Few details about the incident have been made available to the public, with prosecutors sealing the arrest affidavit citing concerns about the ongoing investigation.

According to an initial news release from the Hastings Police Department issued Feb. 27, officers were in the area of Third Street and Laird Avenue about 1:04 p.m. and recognized a man who had a warrant out for his arrest.

The suspect later was identified as Burge.

Officers attempted to make contact with Burge and he fled on foot. The foot chase ended behind a business in the 200 block of North Laird Avenue.

According to court records, there was a warrant out for Burge’s arrest in a misdemeanor case in Adams County Court charging him with unauthorized use of a propelled vehicle, a Class 3 misdemeanor punishable by up to three months in jail and a $500 fine.

Burge failed to appear on the charge on Feb. 18, and a warrant was issued for his arrest.