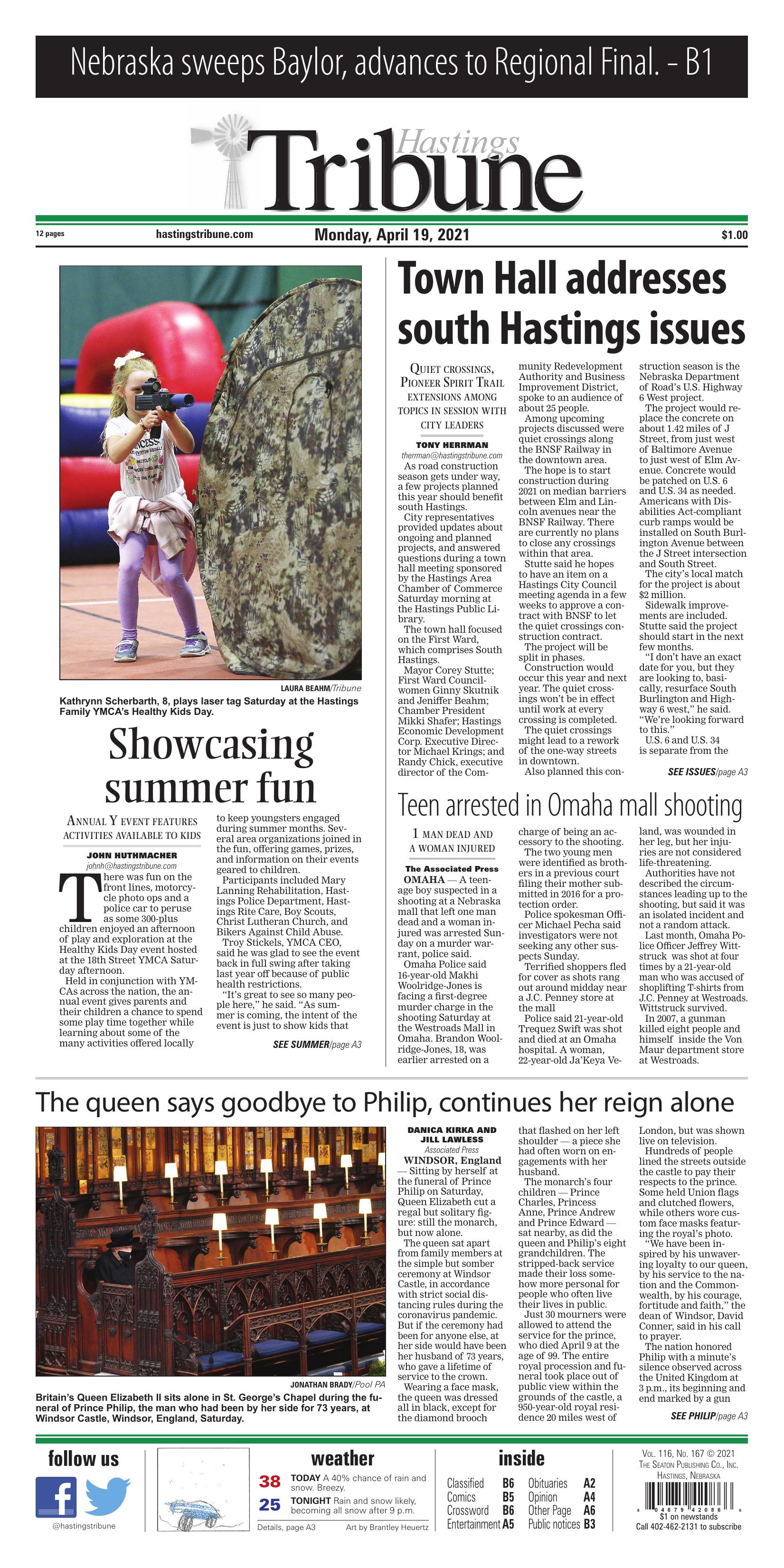 There was fun on the front lines, motorcycle photo ops and a police car to peruse as some 300-plus children enjoyed an afternoon of play and exploration at the Healthy Kids Day event hosted at the 18th Street YMCA Saturday afternoon.

Held in conjunction with YMCAs across the nation, the annual event gives parents and their children a chance to spend some play time together while learning about some of the many activities offered locally to keep youngsters engaged during summer months. Several area organizations joined in the fun, offering games, prizes, and information on their events geared to children. 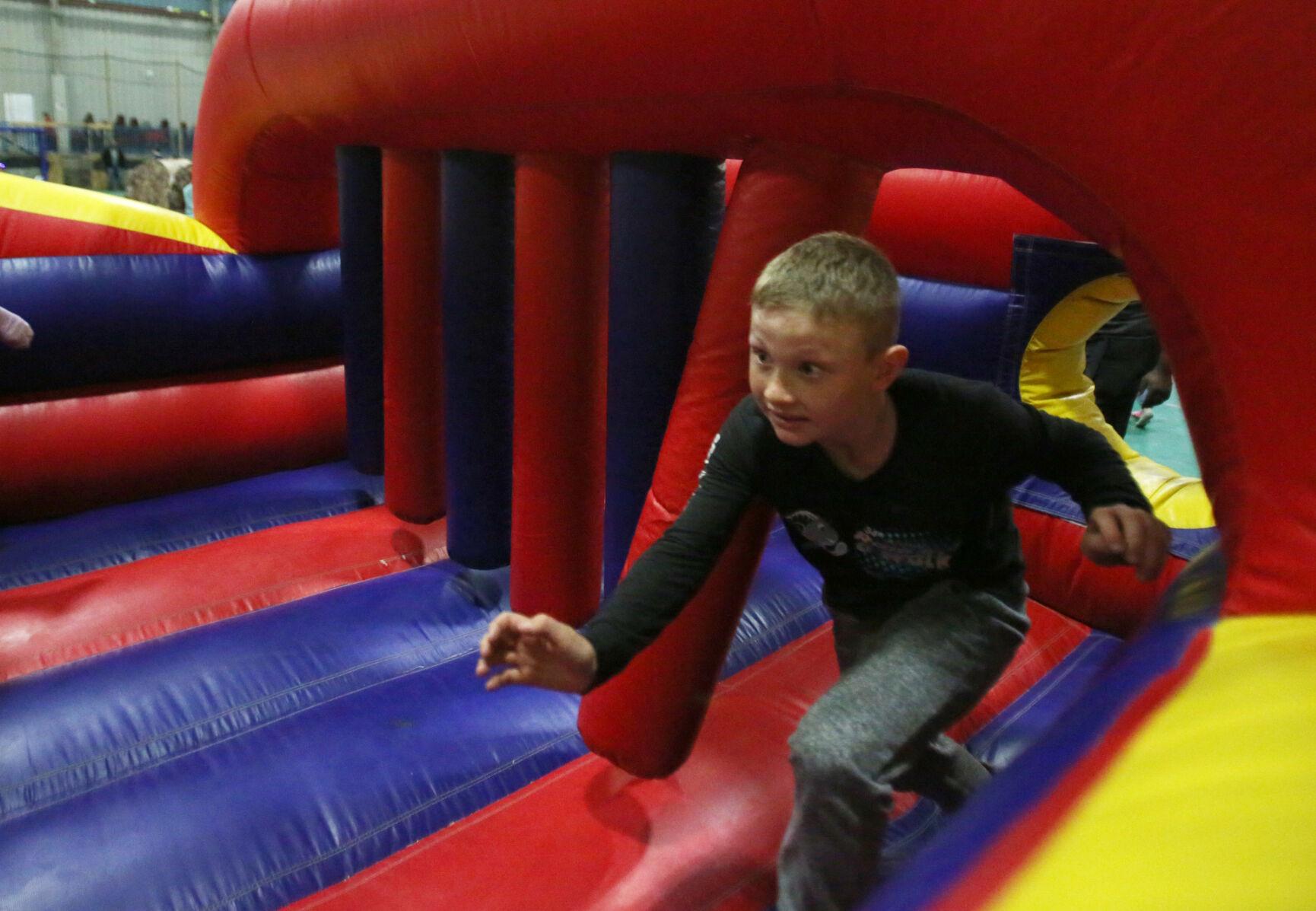 Troy Stickels, YMCA CEO, said he was glad to see the event back in full swing after taking last year off because of public health restrictions.

“It’s great to see so many people here,” he said. “As summer is coming, the intent of the event is just to show kids that there are things that they can do outside and to be active.

“When summer comes, what happens is a lot of kids just sit inside and eat not healthy stuff. The goal is really just to show kids that there’s a lot that goes on in the summer that they can be involved in — camps and sports events — and a lot of other vendors here that do great things.”

Hope LeBar, Y marketing director, said the annual event shines a light on the organization’s many offerings while promoting other child-friendly organizations in the community. The underlying theme is simple: There are plenty of things to see and do in Hastings to keep youngsters ages pre-school through middle school engaged and entertained.

“I think kids just really like stopping by and playing the games and activities that each place has to offer,” she said. “Every place in town has something cool to offer the kids this summer. That’s kind of what we’re trying to showcase, the many ways there are to get involved.” 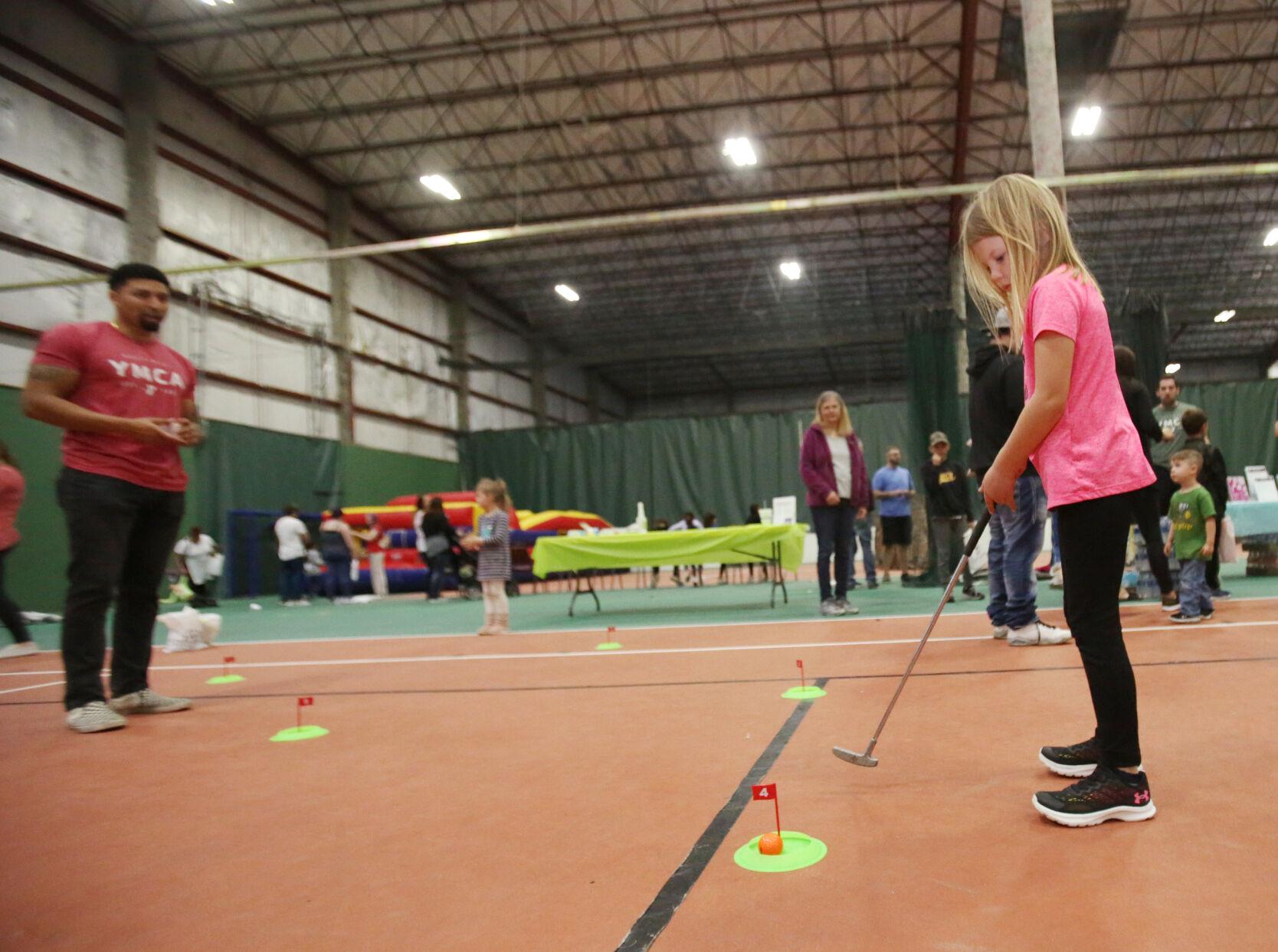 Rachel Dillman of Harvard joined in the event accompanied by her husband Steven, mother Cathy Helwick of Hastings, and eight nieces and nephews.

She said she viewed the day as “an opportunity to get out of the house and do something with the kids.”

Her niece, Hallie Keller, 10, of Hastings, received a sports drink after twice trying her hand at corn hole. The bouncy house was next on her list of things to try.

Nancy Randall of Hastings snapped several cellphone photos while watching her daughters Analine, 8, and Eliana, 4, and best friend’s daughter shoot it out on the laser tag course.

“I like it,” she said of the event. “It’s definitely packed, but the kids are having fun, so that’s all that matters. I think it’s a good outreach.” 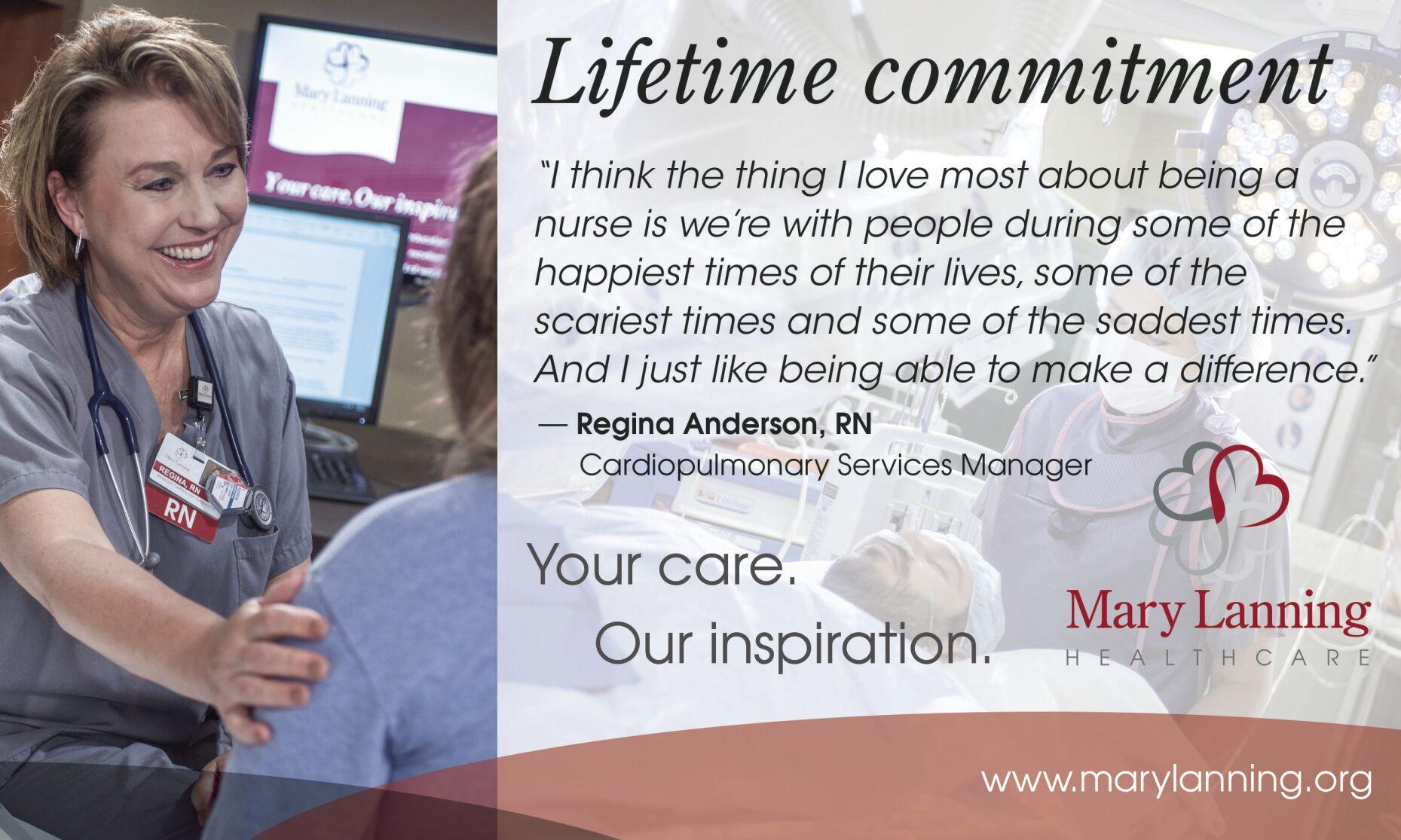 As road construction season gets under way, a few projects planned this year should benefit south Hastings.

City representatives provided updates about ongoing and planned projects, and answered questions during a town hall meeting sponsored by the Hastings Area Chamber of Commerce Saturday morning at the Hastings Public Library.

The town hall focused on the First Ward, which comprises South Hastings.

Among upcoming projects discussed were quiet crossings along the BNSF Railway in the downtown area.

The hope is to start construction during 2021 on median barriers between Elm and Lincoln avenues near the BNSF Railway. There are currently no plans to close any crossings within that area.

Stutte said he hopes to have an item on a Hastings City Council meeting agenda in a few weeks to approve a contract with BNSF to let the quiet crossings construction contract.

The project will be split in phases.

Construction would occur this year and next year. The quiet crossings won’t be in effect until work at every crossing is completed.

The quiet crossings might lead to a rework of the one-way streets in downtown.

The project would replace the concrete on about 1.42 miles of J Street, from just west of Baltimore Avenue to just west of Elm Avenue. Concrete would be patched on U.S. 6 and U.S. 34 as needed. Americans with Disabilities Act-compliant curb ramps would be installed on South Burlington Avenue between the J Street intersection and South Street.

The city’s local match for the project is about $2 million.

Sidewalk improvements are included. Stutte said the project should start in the next few months.

“I don’t have an exact date for you, but they are looking to, basically, resurface South Burlington and Highway 6 west,” he said. “We’re looking forward to this.”

U.S. 6 and U.S. 34 is separate from the NDOT’s 2.47-mile proposed Hastings Southeast project that includes widening and repaving Highway 6 on the east side of Hastings. Hastings Southeast begins at the J Street curve and extends just east of Showboat Boulevard.

“I don’t know if any design ideas have changed there,” Stutte said of Hastings Southeast. “Everyone will know, I’m sure, when it happens because they’ll be out to talk about right-of-way when they’re ready to start moving forward with that.”

The current projection for the local share of Hastings Southeast is $8 million to $12 million, which would be in addition to the $2 million for U.S. 6 and U.S. 34.

There were several questions about sidewalks at specific locations, as well as extensions of the Pioneer Spirit Trail, in south Hastings.

Skutnik and Beahm recorded the sidewalk requests to share with city staff.

Extending the Pioneer Spirit Trail through South Hastings has been a priority as plans took shape for the trail following the renewal of the city’s half-cent sales tax in 2017.

When the council approved the city’s Walkability and Connectivity Plan two years ago, the six sections were placed on file in the order recommended by JEO consultants.

Highest-ranked among trail extensions is a three-phase section that starts at First Street and Colorado Avenue, follows Colorado Avenue to South Street and then mirrors the abandoned Union Pacific right-of-way to Pine Avenue.

Phase 3 continues west along F Street from Burlington Avenue, behind Lincoln Elementary using right-of-way that hasn’t been developed as a road, then north on Baltimore Avenue, west on E Street and north on Emerson Avenue.

The second-highest-ranked section is also largely in south Hastings, connecting Hastings Middle School to Brickyard Park. This leg would follow Marian Road to South Street, around the field in the southwest corner of the city, and connect to the trail in Brickyard Park.

Speaking about development and redevelopment in Hastings, Krings, Chick and Shafer spoke about the importance of having a comprehensive knowledge of available properties, including those in south Hastings.

“The main thing we need is understanding of what properties are available in our community and who those people are that own them,” Krings said. “That’s really where our challenge lies.”

Chick said it also comes down to having an interested property on the other side.

“One thing about community redevelopment, or economic development, you have to have businesses or individuals who want to spend money,” Chick said. “It’s not that we are reactionary, but without those individuals or companies that are interested in investing in a particular site or a particular area it’s very difficult for us to push forward any developments.”

There were also several questions on Saturday about code enforcement as it pertains to nuisance properties. Stutte said such properties are addressed on complaint-driven process.

He said City Administrator Dave Ptak recently approved the request for a code enforcement officer, who will be part of the Development Services Department.

“We also don’t necessarily have the type of manpower we need to be proactive,” Stutte said. “That’s really why we’re looking at this code enforcement officer, to basically be moved into development services and take a more proactive role in looking at these issues.”

Skutnik praised the work of the city’s existing community service officers, saying they are doing everything they can.

“So they are doing a wonderful job with what they can,” she said. “It’s just I think we need a little more.”

OMAHA — A teenage boy suspected in a shooting at a Nebraska mall that left one man dead and a woman injured was arrested Sunday on a murder warrant, police said.

Omaha Police said 16-year-old Makhi Woolridge-Jones is facing a first-degree murder charge in the shooting Saturday at the Westroads Mall in Omaha. Brandon Woolridge-Jones, 18, was earlier arrested on a charge of being an accessory to the shooting.

The two young men were identified as brothers in a previous court filing their mother submitted in 2016 for a protection order.

Terrified shoppers fled for cover as shots rang out around midday near a J.C. Penney store at the mall

Police said 21-year-old Trequez Swift was shot and died at an Omaha hospital. A woman, 22-year-old Ja’Keya Veland, was wounded in her leg, but her injuries are not considered life-threatening.

Authorities have not described the circumstances leading up to the shooting, but said it was an isolated incident and not a random attack.

Last month, Omaha Police Officer Jeffrey Wittstruck was shot at four times by a 21-year-old man who was accused of shoplifting T-shirts from J.C. Penney at Westroads. Wittstruck survived.

In 2007, a gunman killed eight people and himself inside the Von Maur department store at Westroads.