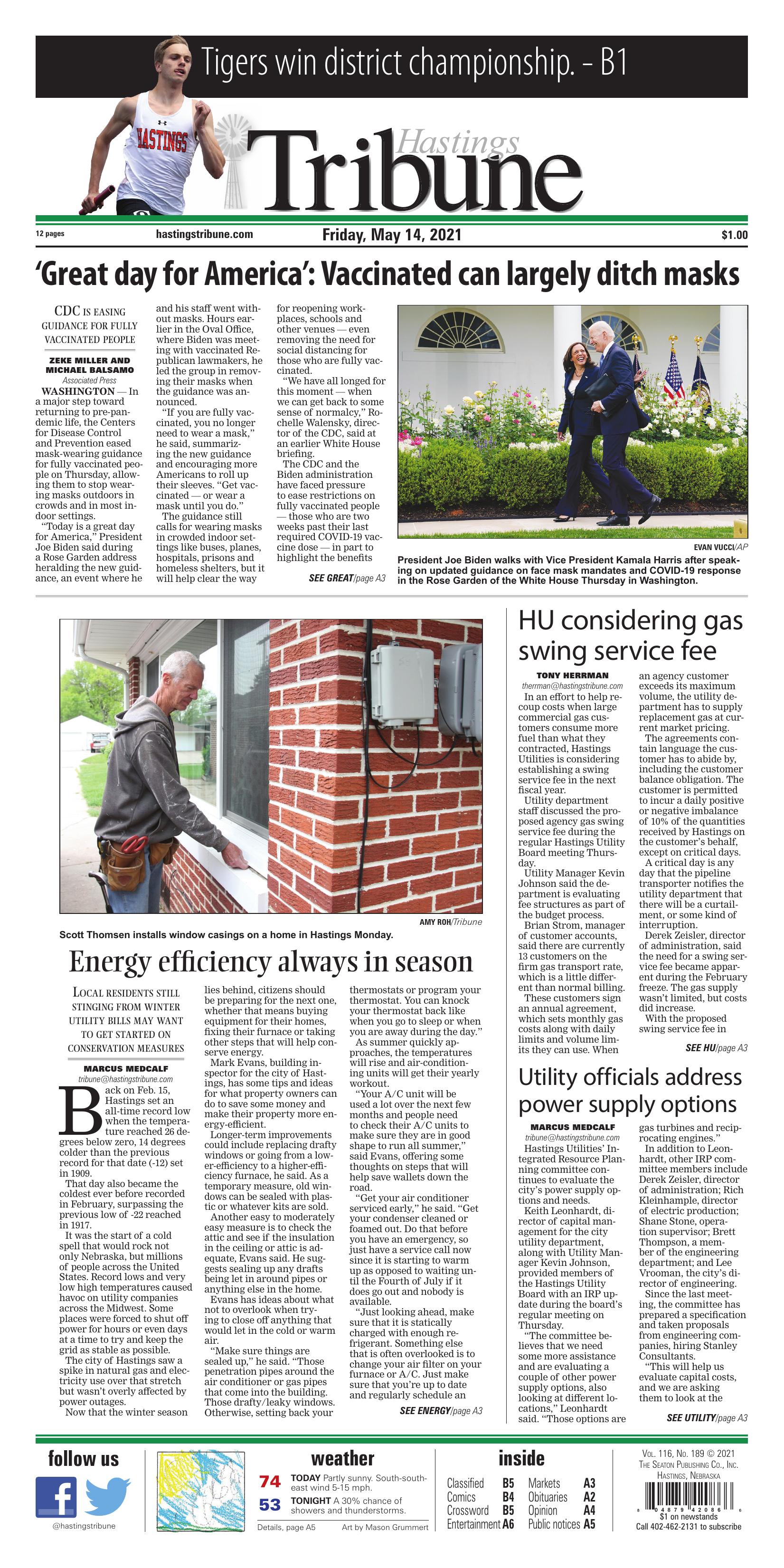 Back on Feb. 15, Hastings set an all-time record low when the temperature reached 26 degrees below zero, 14 degrees colder than the previous record for that date (-12) set in 1909.

That day also became the coldest ever before recorded in February, surpassing the previous low of -22 reached in 1917.

It was the start of a cold spell that would rock not only Nebraska, but millions of people across the United States. Record lows and very low high temperatures caused havoc on utility companies across the Midwest. Some places were forced to shut off power for hours or even days at a time to try and keep the grid as stable as possible.

The city of Hastings saw a spike in natural gas and electricity use over that stretch but wasn’t overly affected by power outages.

Now that the winter season lies behind, citizens should be preparing for the next one, whether that means buying equipment for their homes, fixing their furnace or taking other steps that will help conserve energy.

Mark Evans, building inspector for the city of Hastings, has some tips and ideas for what property owners can do to save some money and make their property more energy-efficient.

Longer-term improvements could include replacing drafty windows or going from a lower-efficiency to a higher-efficiency furnace, he said. As a temporary measure, old windows can be sealed with plastic or whatever kits are sold.

Another easy to moderately easy measure is to check the attic and see if the insulation in the ceiling or attic is adequate, Evans said. He suggests sealing up any drafts being let in around pipes or anything else in the home.

Evans has ideas about what not to overlook when trying to close off anything that would let in the cold or warm air.

“Make sure things are sealed up,” he said. “Those penetration pipes around the air conditioner or gas pipes that come into the building. Those drafty/leaky windows. Otherwise, setting back your thermostats or program your thermostat. You can knock your thermostat back like when you go to sleep or when you are away during the day.”

As summer quickly approaches, the temperatures will rise and air-conditioning units will get their yearly workout.

“Your A/C unit will be used a lot over the next few months and people need to check their A/C units to make sure they are in good shape to run all summer,” said Evans, offering some thoughts on steps that will help save wallets down the road.

“Get your air conditioner serviced early,” he said. “Get your condenser cleaned or foamed out. Do that before you have an emergency, so just have a service call now since it is starting to warm up as opposed to waiting until the Fourth of July if it does go out and nobody is available.

“Just looking ahead, make sure that it is statically charged with enough refrigerant. Something else that is often overlooked is to change your air filter on your furnace or A/C. Just make sure that you’re up to date and regularly schedule an appointment on your phone or whatever you choose that will really contribute a lot by keeping that air filter clean.”

“It really applies to new construction, additions and renovations. New constructions have to meet (the code provisions),” Evans said.

The Nebraska Legislature adopted the 2018 energy code that went into effect in July 2020. Before adopting the code itself, the city of Hastings worked with the state Department of Energy and Environment and the Nebraska Code Officials Association, of which Evans is a board member.

“We looked at the energy code and came up with five local amendments,” Evans said. “When you adopt a model code you can change certain things for a particular geography, climate or certain local conditions. For cost savings, the state allows you to amend that so the code officials group identified five things that amend to that.” 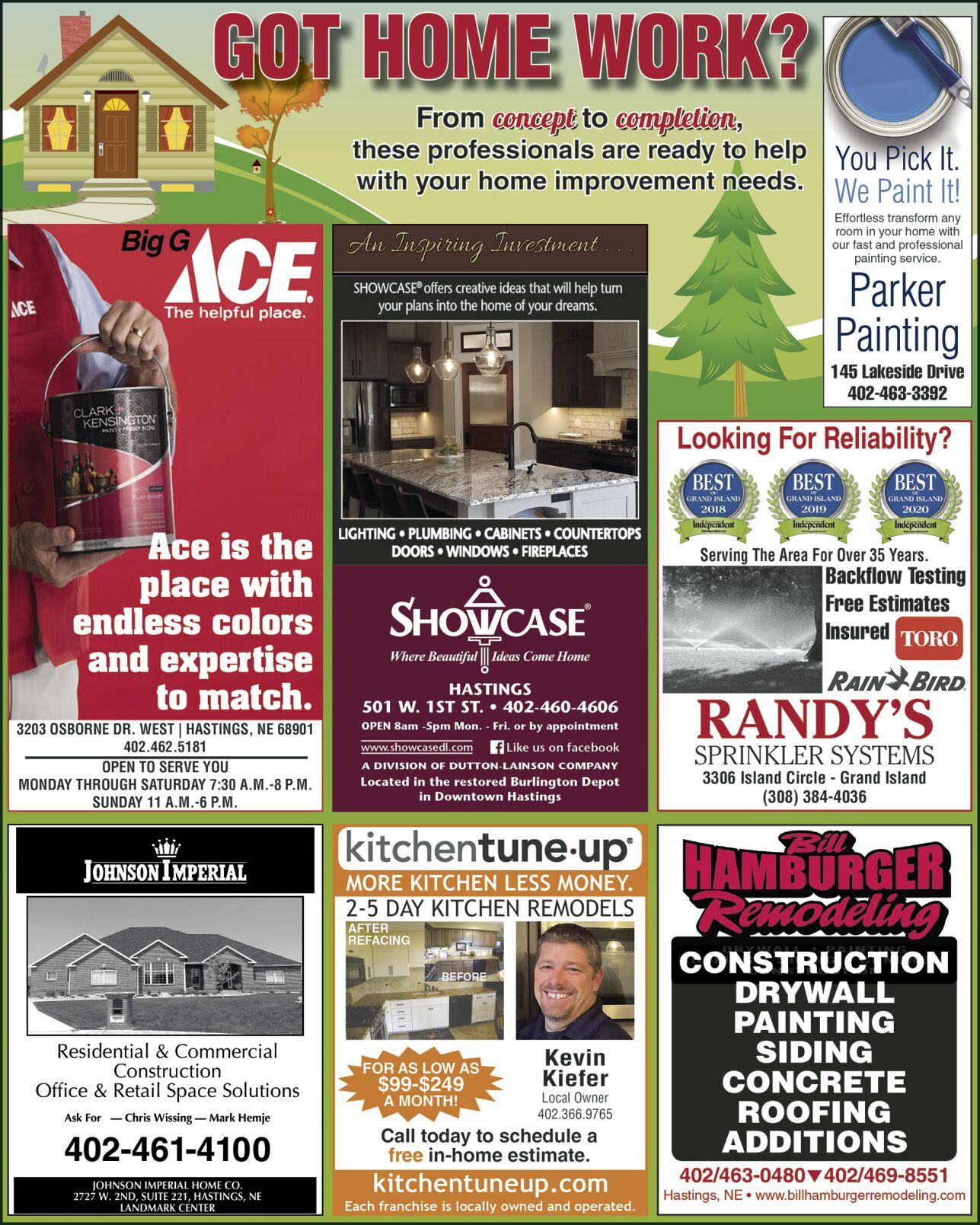 In an effort to help recoup costs when large commercial gas customers consume more fuel than what they contracted, Hastings Utilities is considering establishing a swing service fee in the next fiscal year.

Brian Strom, manager of customer accounts, said there are currently 13 customers on the firm gas transport rate, which is a little different than normal billing.

These customers sign an annual agreement, which sets monthly gas costs along with daily limits and volume limits they can use. When an agency customer exceeds its maximum volume, the utility department has to supply replacement gas at current market pricing.

The agreements contain language the customer has to abide by, including the customer balance obligation. The customer is permitted to incur a daily positive or negative imbalance of 10% of the quantities received by Hastings on the customer’s behalf, except on critical days.

A critical day is any day that the pipeline transporter notifies the utility department that there will be a curtailment, or some kind of interruption.

Derek Zeisler, director of administration, said the need for a swing service fee became apparent during the February freeze. The gas supply wasn’t limited, but costs did increase.

With the proposed swing service fee in place, a customer that exceeded the contracted maximum daily transportation amount would be charged the price of replacement gas per MMBtu based on the Platts-Gas Daily Price Guide, which is the real-time market value of gas, along with an administrative charge of 10%.

The swing service fee would be added to cover non-critical day consumption when the customer consumes more gas than its maximum allotment. It would cover the utility department’s cost to add replacement gas for an agency customer.

“We have some good wording in there as far as covering, making sure the rest of our customers don’t have to carry the burden for agency gas customers. What we found though is it only kicks in if there is a critical day or an (operational flow order),” Zeisler said.

Also during the meeting, Johnson said the process of temporarily moving the majority of City Building employees from downtown to the North Denver Station, 1228 N. Denver Ave., has a 30- to 90-day timeframe.

The move is taking place for repairs to be made at the City Building, including asbestos abatement in the basement.

The next Utility Board meeting will take place in the large conference room in the Hastings Public Library.

Johnson said the move will make for a cramped North Denver Station, taking away meeting space inside of the building.

The city is looking into renting trailers that will be parked on the North Denver Station parking lot for staff meetings.

Mayor Corey Stutte when it comes to the future of the City Building, Hastings is currently in a fact-finding stage and not at a decision point.

Keith Leonhardt, director of capital management for the city utility department, along with Utility Manager Kevin Johnson, provided members of the Hastings Utility Board with an IRP update during the board’s regular meeting on Thursday.

“The committee believes that we need some more assistance and are evaluating a couple of other power supply options, also looking at different locations,” Leonhardt said. “Those options are gas turbines and reciprocating engines.”

In addition to Leonhardt, other IRP committee members include Derek Zeisler, director of administration; Rich Kleinhample, director of electric production; Shane Stone, operation supervisor; Brett Thompson, a member of the engineering department; and Lee Vrooman, the city’s director of engineering.

Since the last meeting, the committee has prepared a specification and taken proposals from engineering companies, hiring Stanley Consultants.

“This will help us evaluate capital costs, and we are asking them to look at the three different sites, Whelan Energy Center, North Denver and Don Henry,” Leonhardt said, referring to the city’s existing power plant sites. “They will be starting our work next Tuesday. They will be onsite here in Hastings. Their work is expected to be completed June 11, and this will match up well with our budget deliberations.”

At this time the utility department is evaluating all of its existing sources of energy.

Johnson said discussions have occurred about expanding the solar farm with new technology.

“All of this is why it is taking a while,” he said.”I haven’t put any time frame pressure on our guys. We need to be able to put appropriate dollars in the budget when the time comes, but we want to be very through, very meticulous putting all of this together.

“It is time-consuming. There are very critical variables and a lot of critical options. And it is not just an economic option, it’s economics with long-term considerations.”