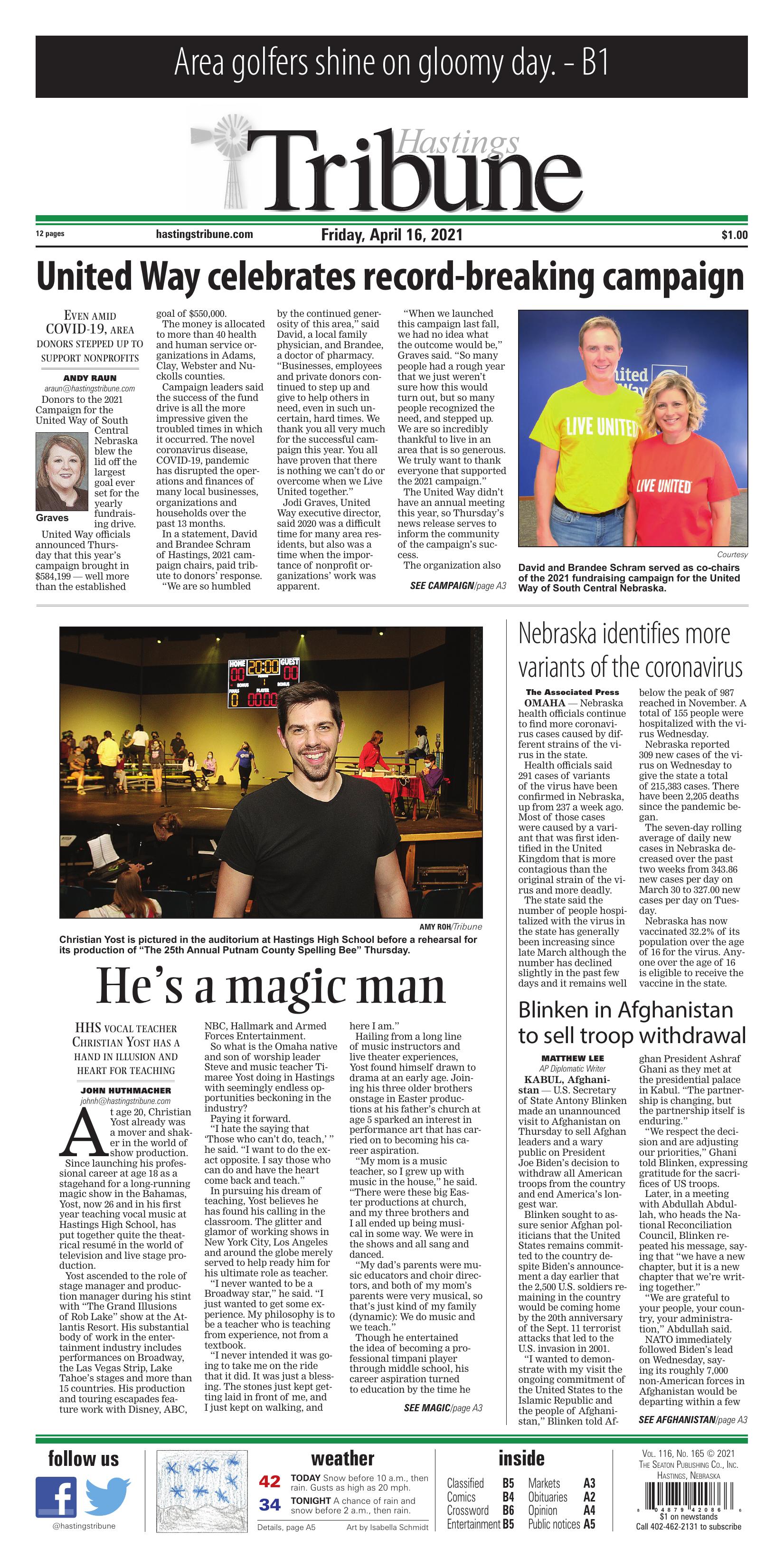 Donors to the 2021 Campaign for the United Way of South Central Nebraska blew the lid off the largest goal ever set for the yearly fundraising drive.

United Way officials announced Thursday that this year’s campaign brought in $584,199 — well more than the established goal of $550,000.

The money is allocated to more than 40 health and human service organizations in Adams, Clay, Webster and Nuckolls counties. 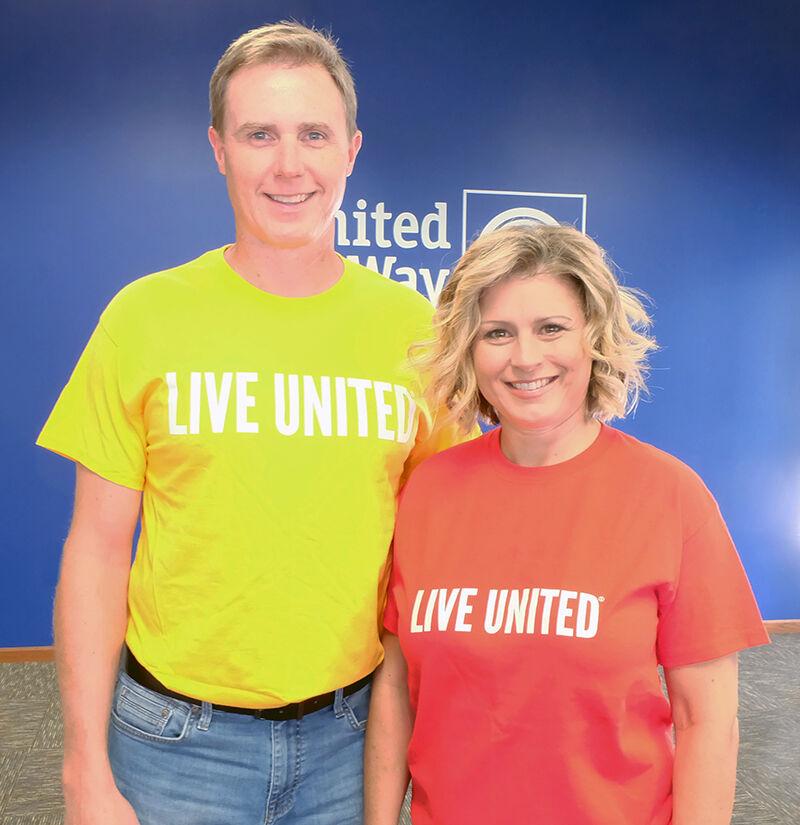 David and Brandee Schram served as co-chairs of the 2021 fundraising campaign for the United Way of South Central Nebraska.

Campaign leaders said the success of the fund drive is all the more impressive given the troubled times in which it occurred. The novel coronavirus disease, COVID-19, pandemic has disrupted the operations and finances of many local businesses, organizations and households over the past 13 months.

In a statement, David and Brandee Schram of Hastings, 2021 campaign chairs, paid tribute to donors’ response.

“We are so humbled by the continued generosity of this area,” said David, a local family physician, and Brandee, a doctor of pharmacy. “Businesses, employees and private donors continued to step up and give to help others in need, even in such uncertain, hard times. We thank you all very much for the successful campaign this year. You all have proven that there is nothing we can’t do or overcome when we Live United together.”

Jodi Graves, United Way executive director, said 2020 was a difficult time for many area residents, but also was a time when the importance of nonprofit organizations’ work was apparent. 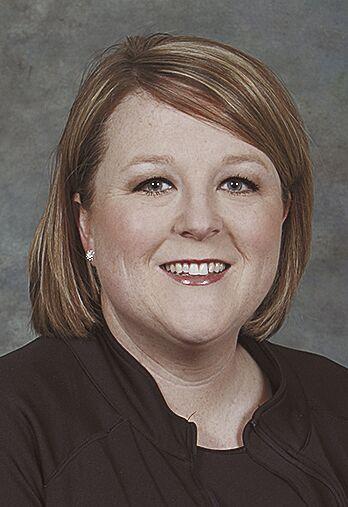 “When we launched this campaign last fall, we had no idea what the outcome would be,” Graves said. “So many people had a rough year that we just weren’t sure how this would turn out, but so many people recognized the need, and stepped up. We are so incredibly thankful to live in an area that is so generous. We truly want to thank everyone that supported the 2021 campaign.”

The United Way didn’t have an annual meeting this year, so Thursday’s news release serves to inform the community of the campaign’s success.

The organization also announced recognition for a number of key individuals. The list of honorees follows: 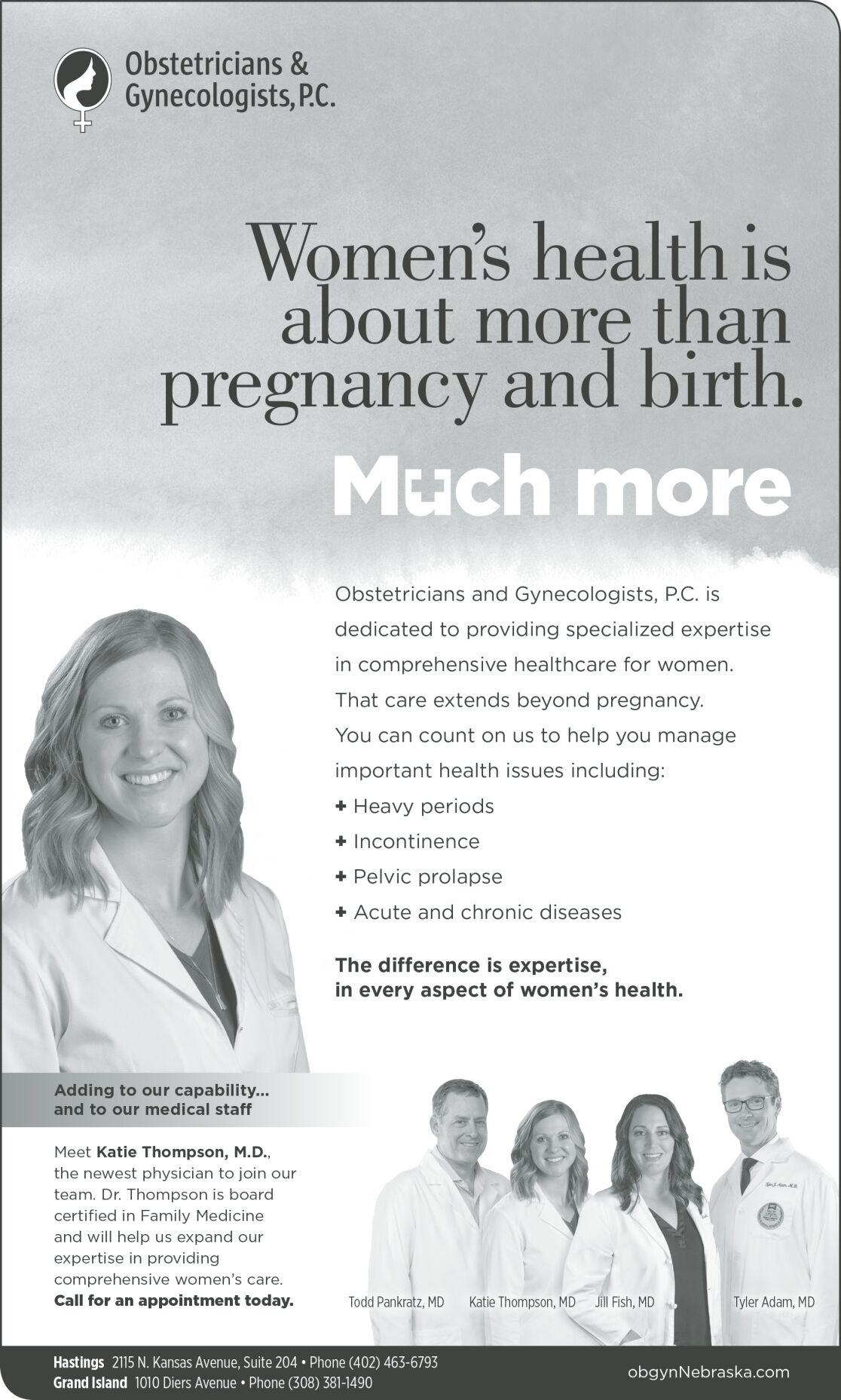 At age 20, Christian Yost already was a mover and shaker in the world of show production.

Since launching his professional career at age 18 as a stagehand for a long-running magic show in the Bahamas, Yost, now 26 and in his first year teaching vocal music at Hastings High School, has put together quite the theatrical resumé in the world of television and live stage production.

Yost ascended to the role of stage manager and production manager during his stint with “The Grand Illusions of Rob Lake” show at the Atlantis Resort. His substantial body of work in the entertainment industry includes performances on Broadway, the Las Vegas Strip, Lake Tahoe’s stages and more than 15 countries. His production and touring escapades feature work with Disney, ABC, NBC, Hallmark and Armed Forces Entertainment.

So what is the Omaha native and son of worship leader Steve and music teacher Timaree Yost doing in Hastings with seemingly endless opportunities beckoning in the industry?

“I hate the saying that ‘Those who can’t do, teach,’ ” he said. “I want to do the exact opposite. I say those who can do and have the heart come back and teach.” 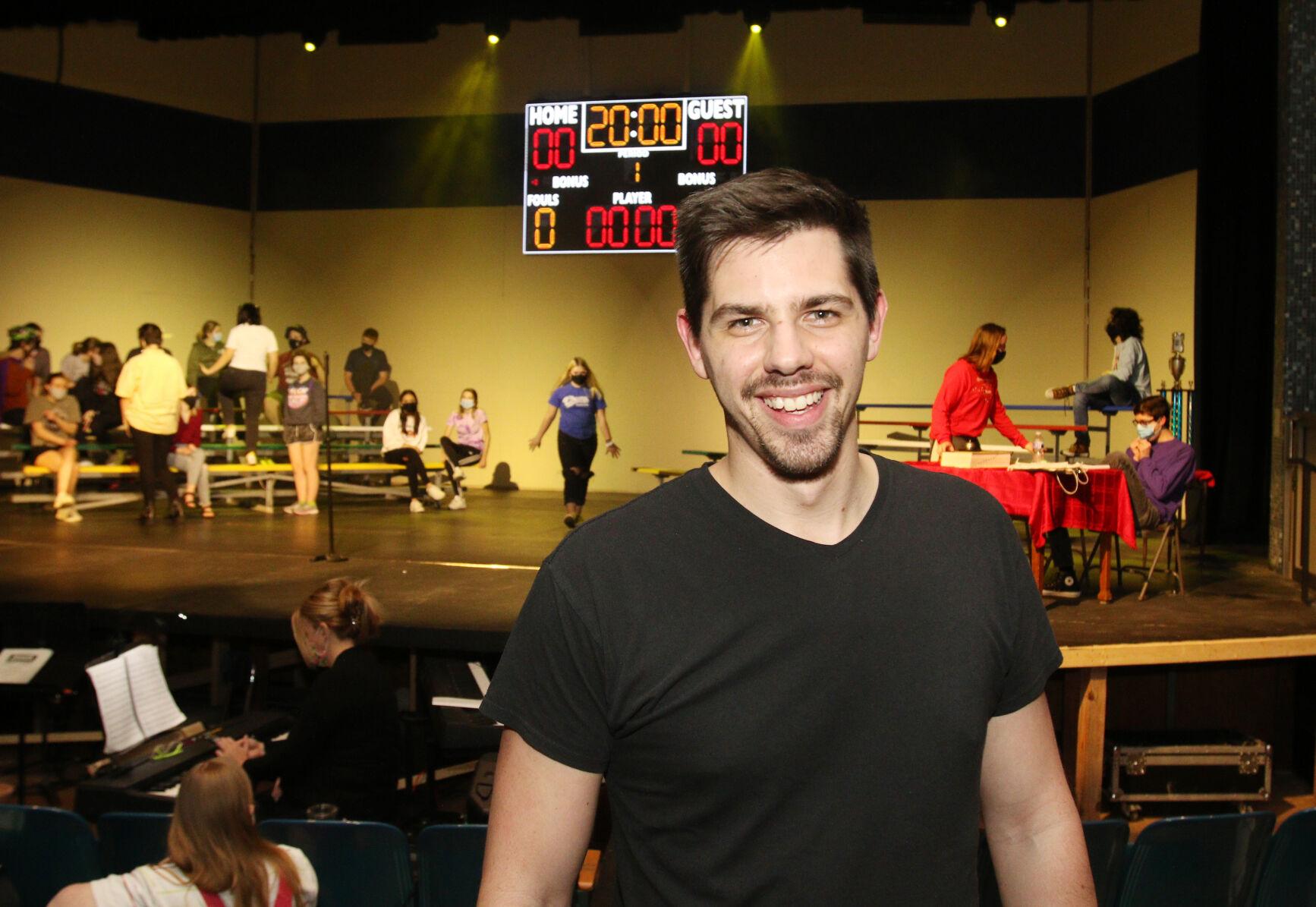 Christian Yost is pictured in the auditorium at Hastings High School before a rehearsal for its production of “The 25th Annual Putnam County Spelling Bee” Thursday.

In pursuing his dream of teaching, Yost believes he has found his calling in the classroom. The glitter and glamor of working shows in New York City, Los Angeles and around the globe merely served to help ready him for his ultimate role as teacher.

“I never wanted to be a Broadway star,” he said. “I just wanted to get some experience. My philosophy is to be a teacher who is teaching from experience, not from a textbook.

“I never intended it was going to take me on the ride that it did. It was just a blessing. The stones just kept getting laid in front of me, and I just kept on walking, and here I am.”

Hailing from a long line of music instructors and live theater experiences, Yost found himself drawn to drama at an early age. Joining his three older brothers onstage in Easter productions at his father’s church at age 5 sparked an interest in performance art that has carried on to becoming his career aspiration.

“My mom is a music teacher, so I grew up with music in the house,” he said. “There were these big Easter productions at church, and my three brothers and I all ended up being musical in some way. We were in the shows and all sang and danced.

“My dad’s parents were music educators and choir directors, and both of my mom’s parents were very musical, so that’s just kind of my family (dynamic): We do music and we teach.”

Though he entertained the idea of becoming a professional timpani player through middle school, his career aspiration turned to education by the time he reached high school at Millard West.

“In high school is when I think I got a bug for this whole choir teaching thing,” he said. “Originally I just wanted to do performances and big show choir. A dream job would have been to not have to teach during the day and just do productions.

“Then as I went through college, I was like, “Whoa, my favorite part of this is actually the teaching!’ I never thought that would be the part I would cherish, even over productions.”

Yost still keeps a hand in making magic happen, creating illusions for public performance that defy rational explanation. He sees in his work as director a similar opportunity to aid audience members in suspending reality from daily stressors, if only for an hour or two.

“I love transporting audiences outside of this world,” he said. “For 90 minutes, let’s let everyone in the seats forget about the junk happening in the world and take them to a world where everything is perfect and take that burden off their shoulders.”

A self-described homebody and workaholic, he feels he’s found his niche here in Hastings. Eating the same breakfast sandwich, drinking the same vanilla iced coffee and wearing the same signature black T-shirt (he has nine of them) suits his fancy just fine, Yost said.

“I like to have my same routine,” he said. “That’s just my thing. I like to see the same people.

“When you’re on the road living by yourself in a hotel room, it’s really hard. I quickly found out that’s not the thing that makes me go.”

Rather, it’s his drive is to help students achieve their heart’s desire by removing any self-imposed barriers that may otherwise keep them from realizing their full potential in all endeavors. Knowing he has the full support and backing of both the school district and community makes him certain he made the right call when answering the teaching job advertisement passed on to him by his mother.

“We have a community that is hugely supportive of the arts,” Yost said. “It’s just been a perfect place for me to bring my skills and traits. To have a school that says, ‘Hey, we trust you. Go have fun!’ has been a dream come true.”

And while he intends to keep his options open to whatever hands-on learning opportunities may come his way in the entertainment field, his motivation remains to help students realize their fullest potential in all endeavors.

“I want to give kids opportunities to chase their big dreams and go beyond the status quo,” he said. “Teaching, passing it on, and giving others opportunities are what make me go.

“I have friends who are out doing big things right now (like) filming TV shows or something, and I miss that life sometimes. But then I remind myself that I get to pass it on to a bunch of people who are going to take their spots eventually.

“Being able to come to school every day and give kids the opportunities to do that makes my heart so much more full. I’m replaceable in the professional world, but the amount of people who want to come and give these lessons and opportunities to students is very few.”