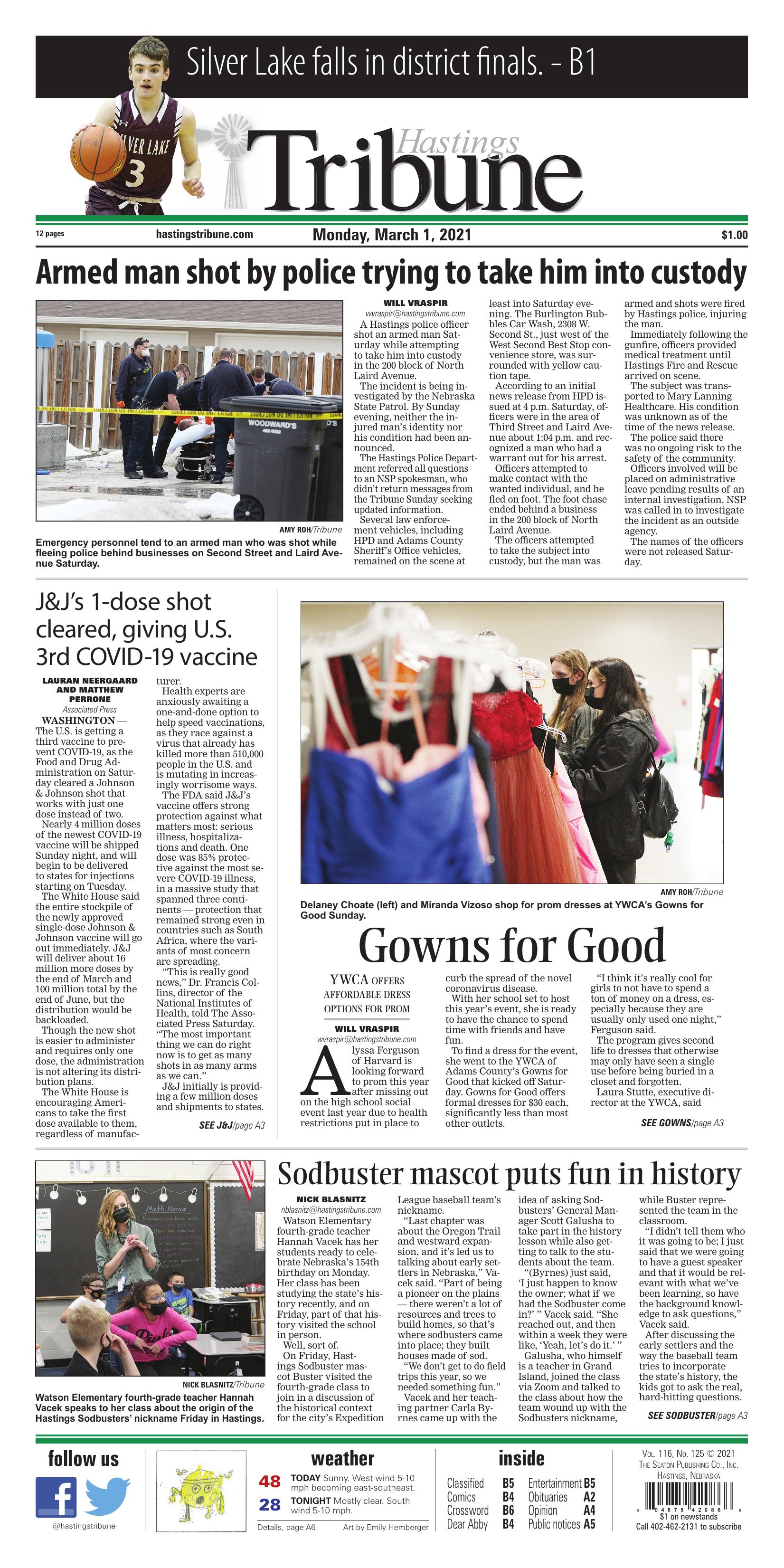 Emergency personnel tend to an armed man who was shot while fleeing police behind businesses on Second Street and Laird Avenue Saturday afternoon.

A Hastings police officer shot an armed man Saturday while attempting to take him into custody in the 200 block of North Laird Avenue.

The incident is being investigated by the Nebraska State Patrol. By Sunday evening, neither the injured man’s identity nor his condition had been announced. 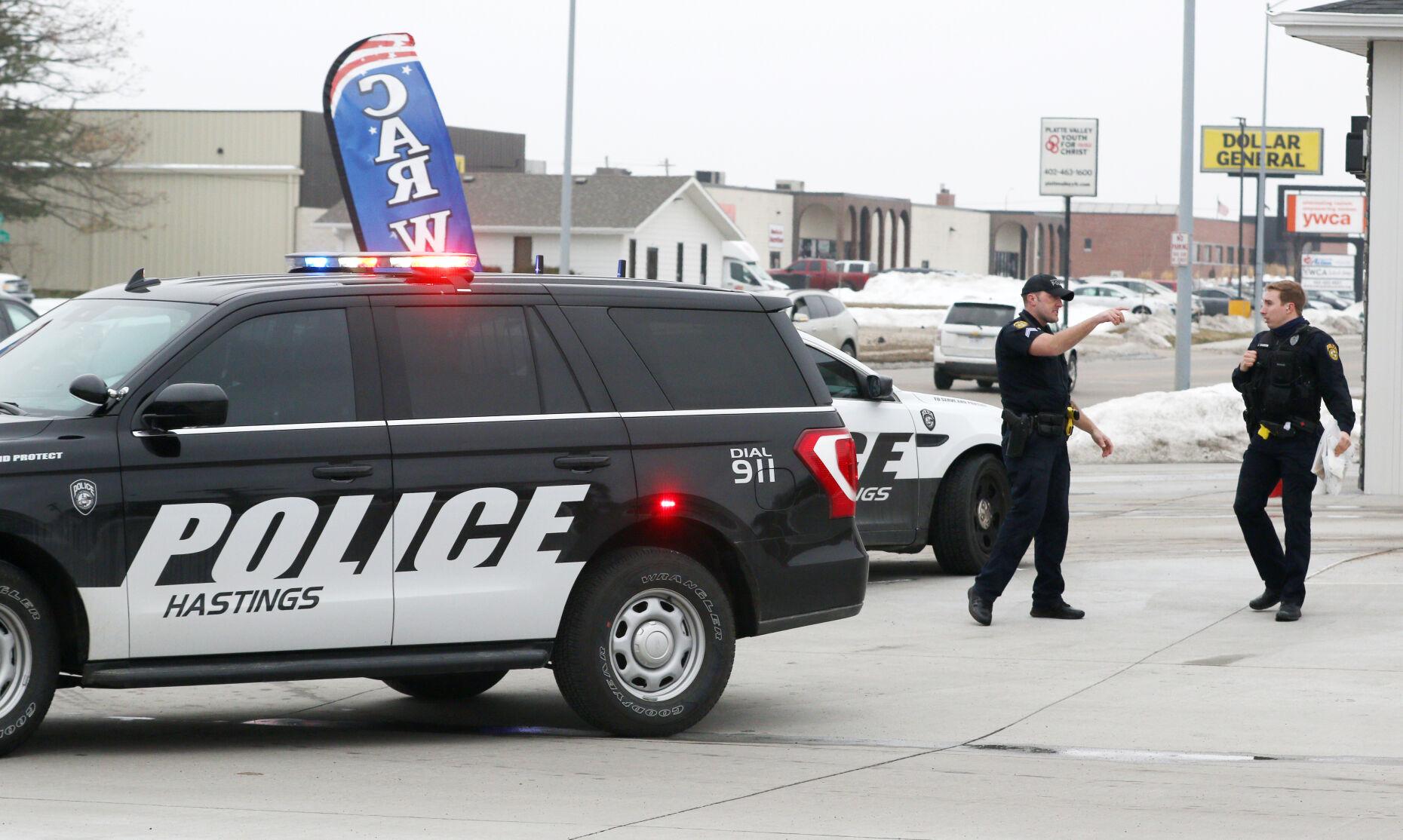 Hastings police officers work the scene of a shooting behind businesses on Second Street and Laird Avenue Saturday afternoon.

The Hastings Police Department referred all questions to an NSP spokesman, who didn’t return messages from the Tribune Sunday seeking updated information. 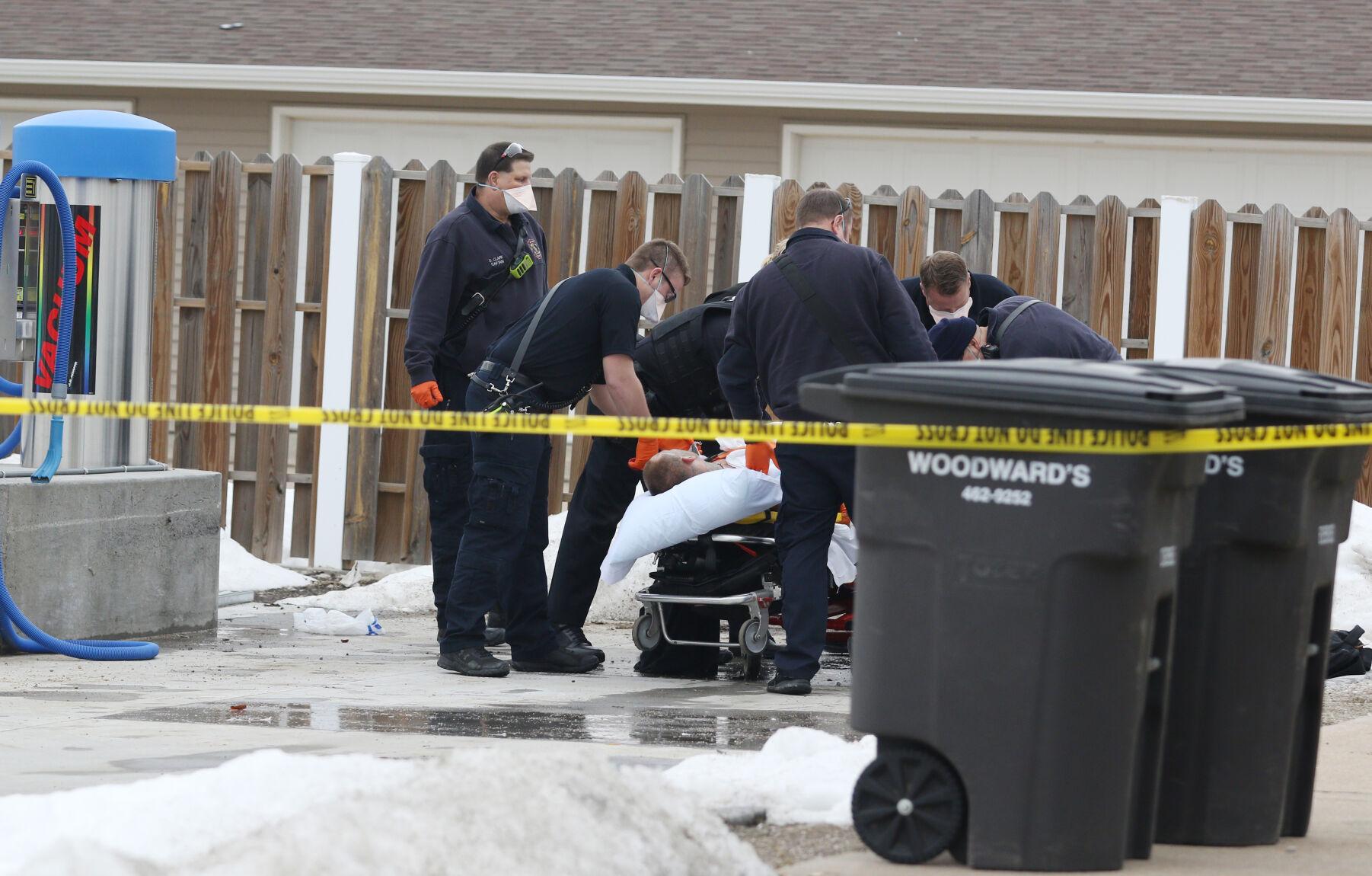 Emergency personnel tend to an armed man who was shot while fleeing police behind businesses on Second Street and Laird Avenue Saturday.

According to an initial news release from HPD issued at 4 p.m. Saturday, officers were in the area of Third Street and Laird Avenue about 1:04 p.m. and recognized a man who had a warrant out for his arrest.

Officers attempted to make contact with the wanted individual, and he fled on foot. The foot chase ended behind a business in the 200 block of North Laird Avenue. 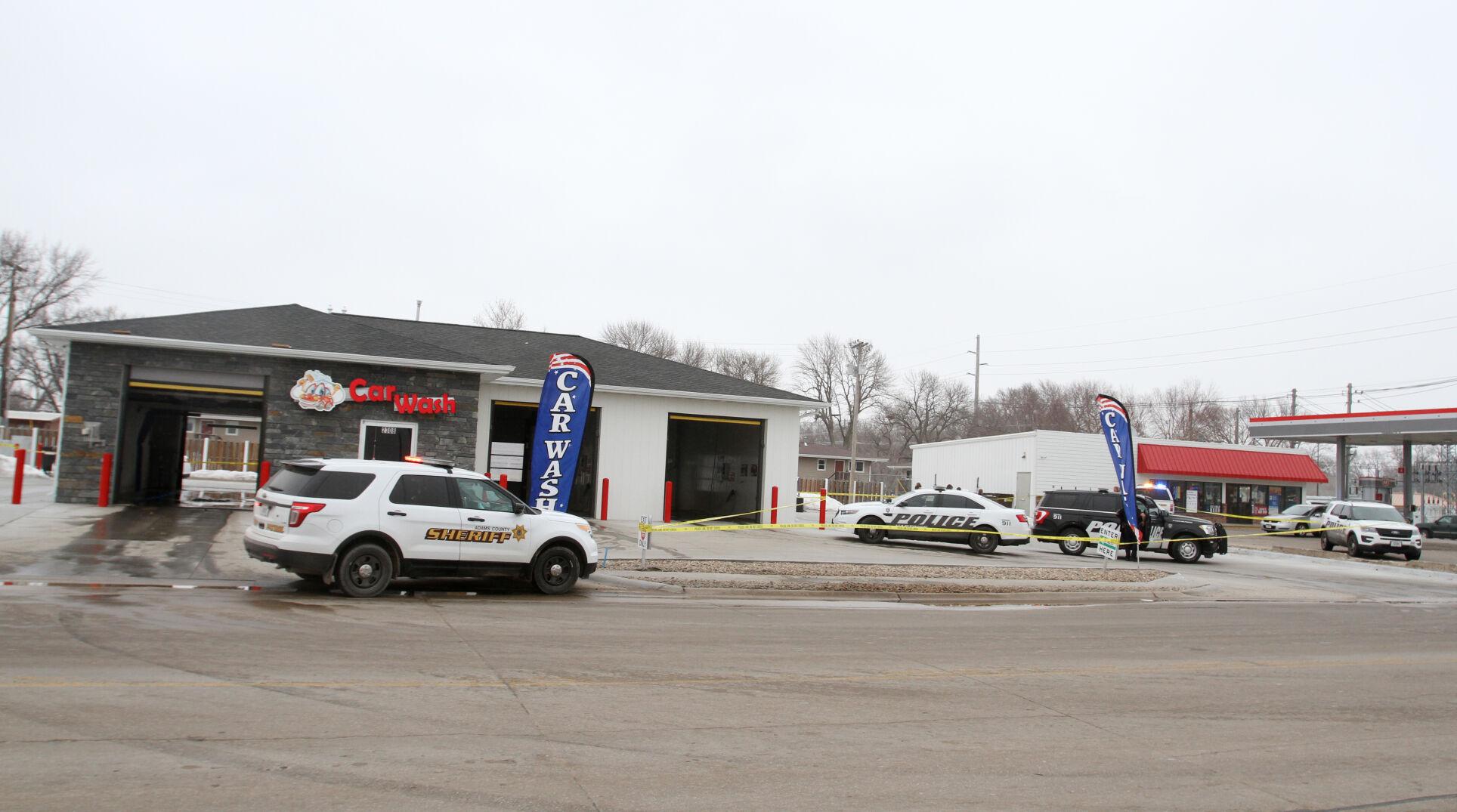 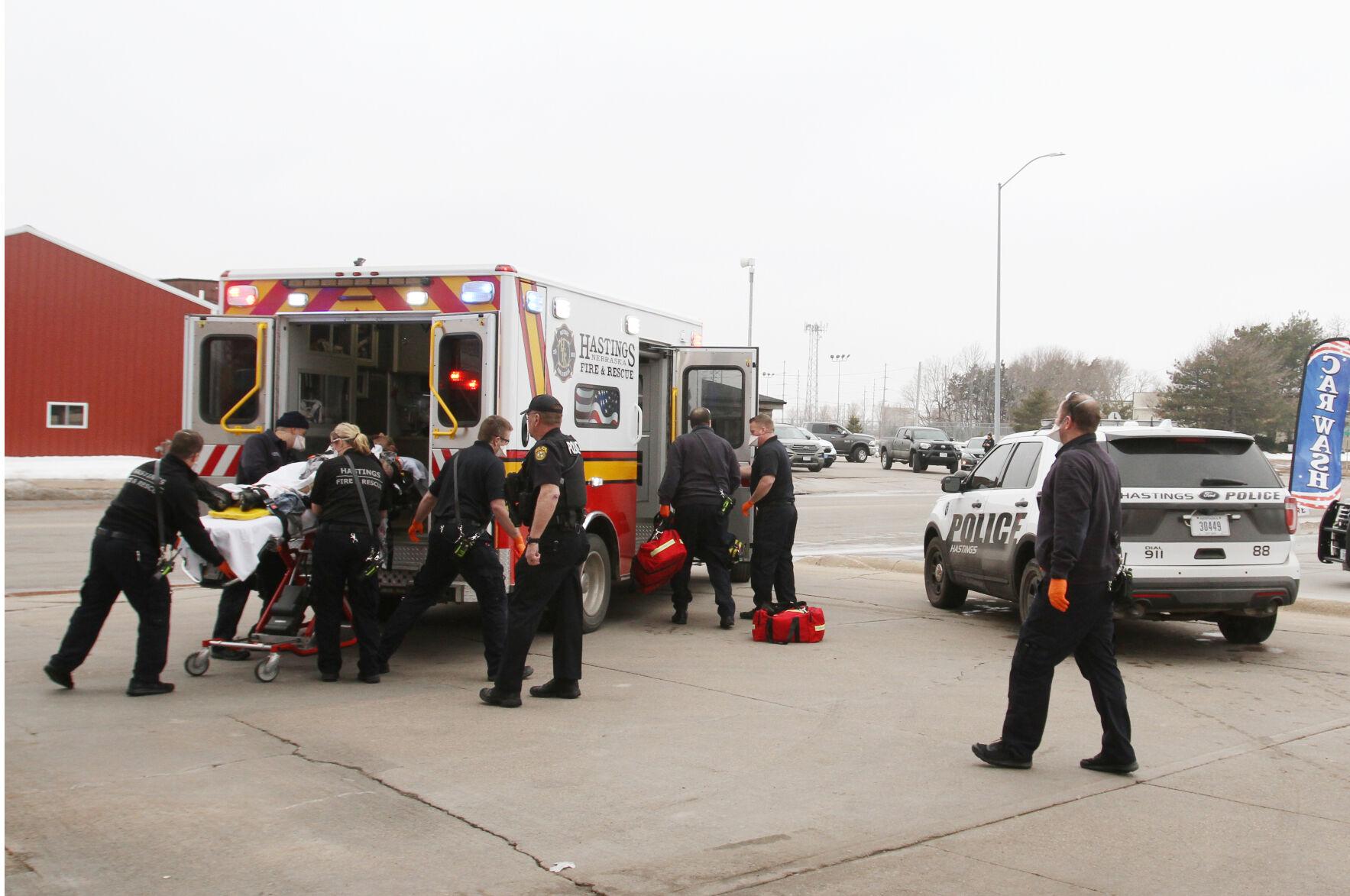 An armed suspect shot by police while fleeing arrest is loaded into an ambulance Saturday afternoon in the 200 block of North Laird Avenue.

The subject was transported to Mary Lanning Healthcare. His condition was unknown as of the time of the news release.

The police said there was no ongoing risk to the safety of the community. 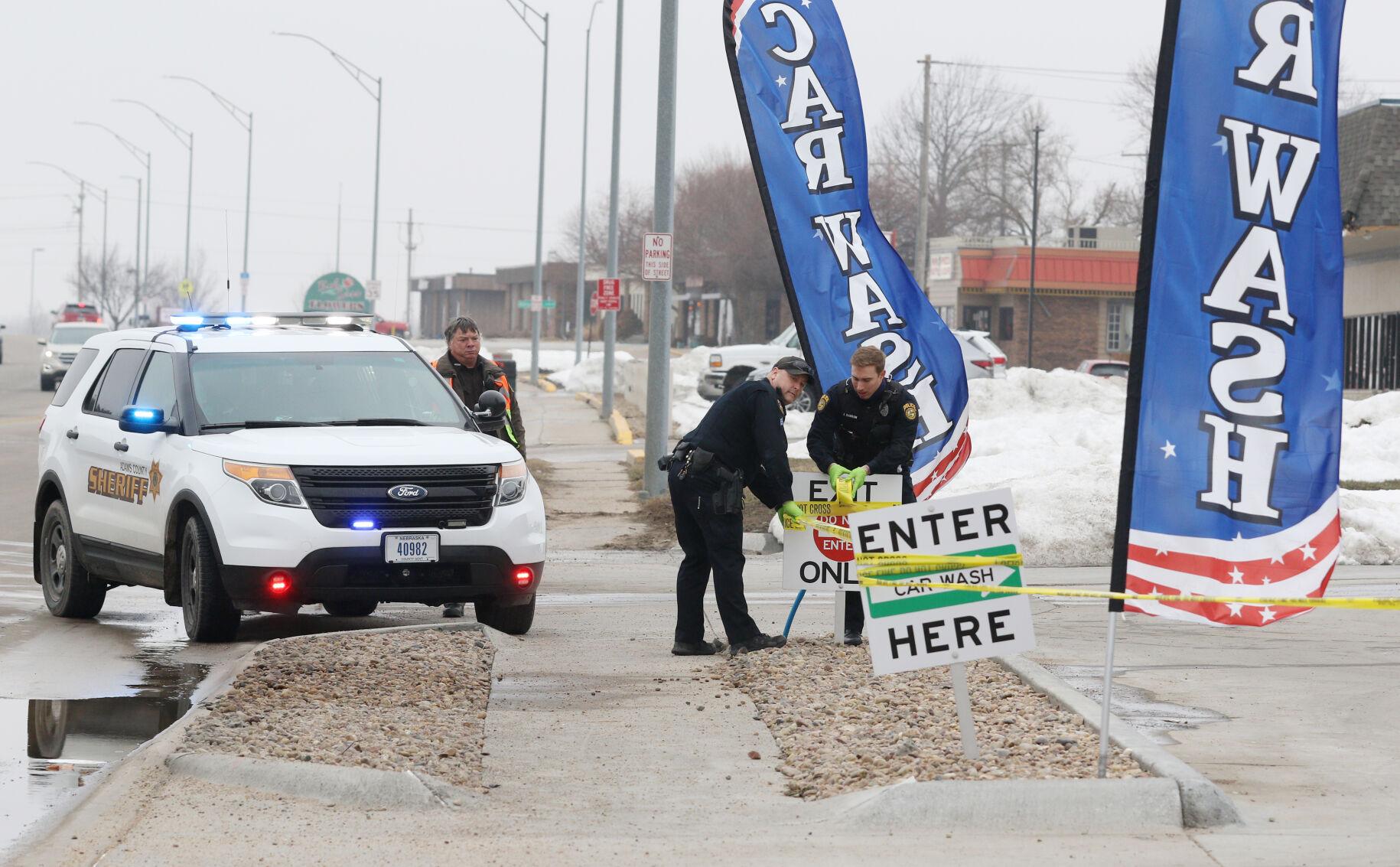 Hastings police officers put up police tape at the scene of a shooting behind businesses on Second Street and Laird Avenue Saturday afternoon.

Officers involved will be placed on administrative leave pending results of an internal investigation. NSP was called in to investigate the incident as an outside agency.

The names of the officers were not released Saturday.

Adams County residents wait in line to enter the Hastings Solid Waste Landfill for the tire recycling event in January 2015.

Alyssa Ferguson of Harvard is looking forward to prom this year after missing out on the high school social event last year due to health restrictions put in place to curb the spread of the novel coronavirus disease.

With her school set to host this year’s event, she is ready to have the chance to spend time with friends and have fun.

To find a dress for the event, she went to the YWCA of Adams County’s Gowns for Good that kicked off Saturday. Gowns for Good offers formal dresses for $30 each, significantly less than most other outlets.

“I think it’s really cool for girls to not have to spend a ton of money on a dress, especially because they are usually only used one night,” Ferguson said.

The program gives second life to dresses that otherwise may only have seen a single use before being buried in a closet and forgotten.

Laura Stutte, executive director at the YWCA, said people bring in used dresses throughout the year and they are stored until weekends around prom time when the racks are opened up to the public. 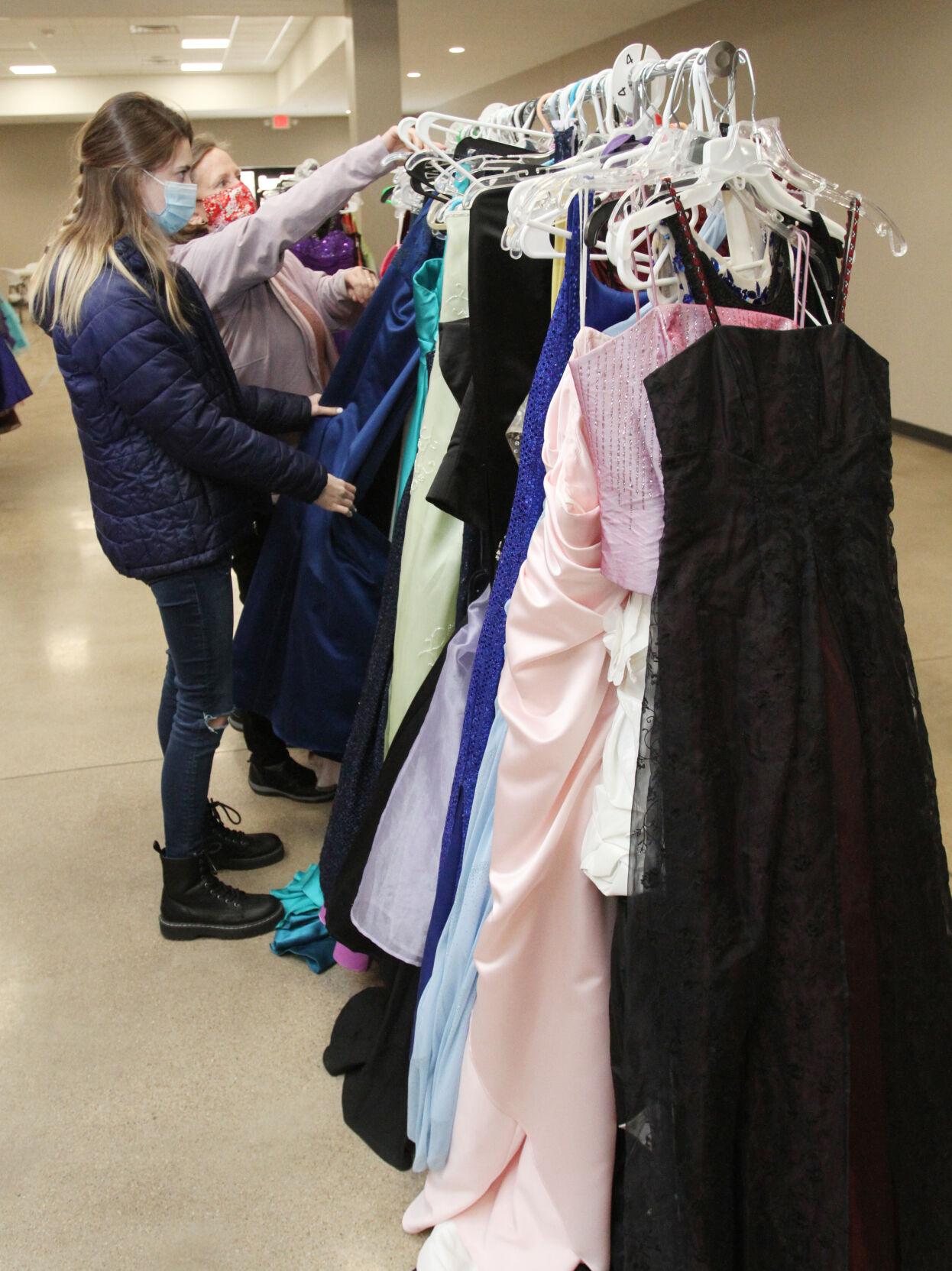 Last year, the YWCA sold about 180 dresses. Proceeds go to the YWCA’s youth programming fund, but the main objective is to empower young women. They also offer scholarships for anyone who can’t afford the $30.

“Our goal is to make sure every girl can go to prom, no matter their financial situation,” Stutte said.

Holly Nitzel of Hastings said she wanted to be there for the opening day of the event to be able to choose from the largest selection. Last year, she came toward the end of the event and felt the selection had been picked over.

She said it’s a great way to reuse dresses and provide affordable options for young women.

“A lot of people need less expensive options,” she said.

Her sister, Gracee Nitzel of Hastings, said she was impressed by the variety of styles. Both found a dress that would meet their needs.

Within the two hours, Stutte said they had visitors from 17 different high schools, the farthest being from North Platte. This is the eighth year of the program at the YWCA.

Dressing rooms were available between two restrooms and art room at the YWCA, a dance studio next door as well as its instructor’s lounge and its two restrooms, plus the YWCA’s Career Closet.

Stutte said it’s fun to watch the girls try on dresses, with smiles and confidence on their faces.

“We really enjoy it,” she said. “It’s always such a good feeling that we are able to provide that for them.”

Jianna Morehead, a junior at St. Cecilia High School, said she was excited to help plan her prom and be able to hang out with her friends.

And thanks to Gowns for Good, she was able to find a dress for the occasion.

“It was fun to try on all the dresses,” she said. “It’s great they let you try on as many as you need to.”

Buster, the Hastings Sodbusters mascot, presents in front of a fourth-grade classroom at Watson Elementary Friday in Hastings.

Watson Elementary fourth-grade teacher Hannah Vacek has her students ready to celebrate Nebraska’s 154th birthday on Monday. Her class has been studying the state’s history recently, and on Friday, part of that history visited the school in person.

On Friday, Hastings Sodbuster mascot Buster visited the fourth-grade class to join in a discussion of the historical context for the city’s Expedition League baseball team’s nickname.

“Last chapter was about the Oregon Trail and westward expansion, and it’s led us to talking about early settlers in Nebraska,” Vacek said. “Part of being a pioneer on the plains — there weren’t a lot of resources and trees to build homes, so that’s where sodbusters came into place; they built houses made of sod.

“We don’t get to do field trips this year, so we needed something fun.” 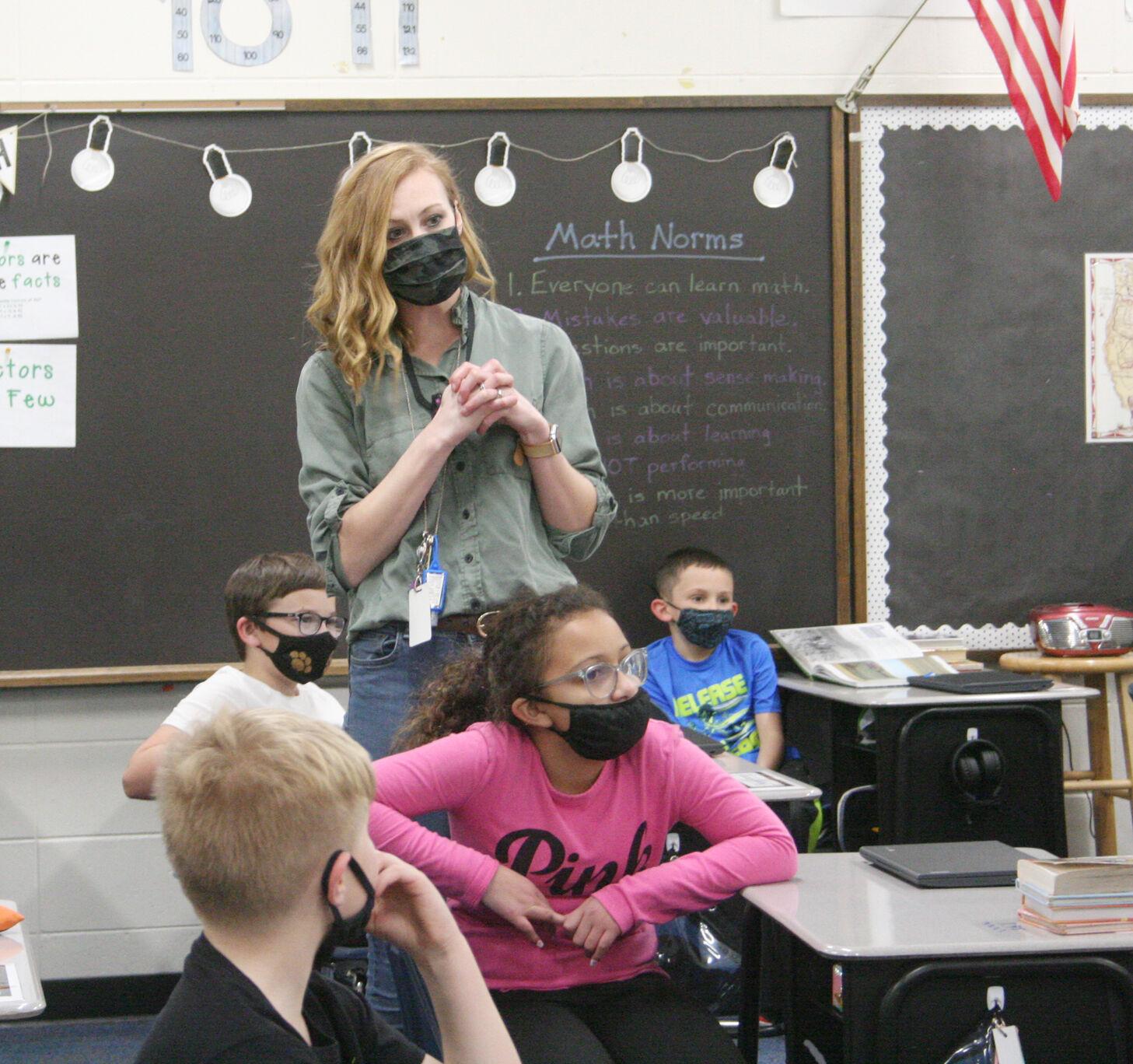 Watson Elementary fourth-grade teacher Hannah Vacek speaks to her class about the origin of the Hastings Sodbusters’ nickname Friday in Hastings.

Vacek and her teaching partner Carla Byrnes came up with the idea of asking Sodbusters’ General Manager Scott Galusha to take part in the history lesson while also getting to talk to the students about the team.

“(Byrnes) just said, ‘I just happen to know the owner; what if we had the Sodbuster come in?’ ” Vacek said. “She reached out, and then within a week they were like, ‘Yeah, let’s do it.’ ”

Galusha, who himself is a teacher in Grand Island, joined the class via Zoom and talked to the class about how the team wound up with the Sodbusters nickname, while Buster represented the team in the classroom.

“I didn’t tell them who it was going to be; I just said that we were going to have a guest speaker and that it would be relevant with what we’ve been learning, so have the background knowledge to ask questions,” Vacek said. 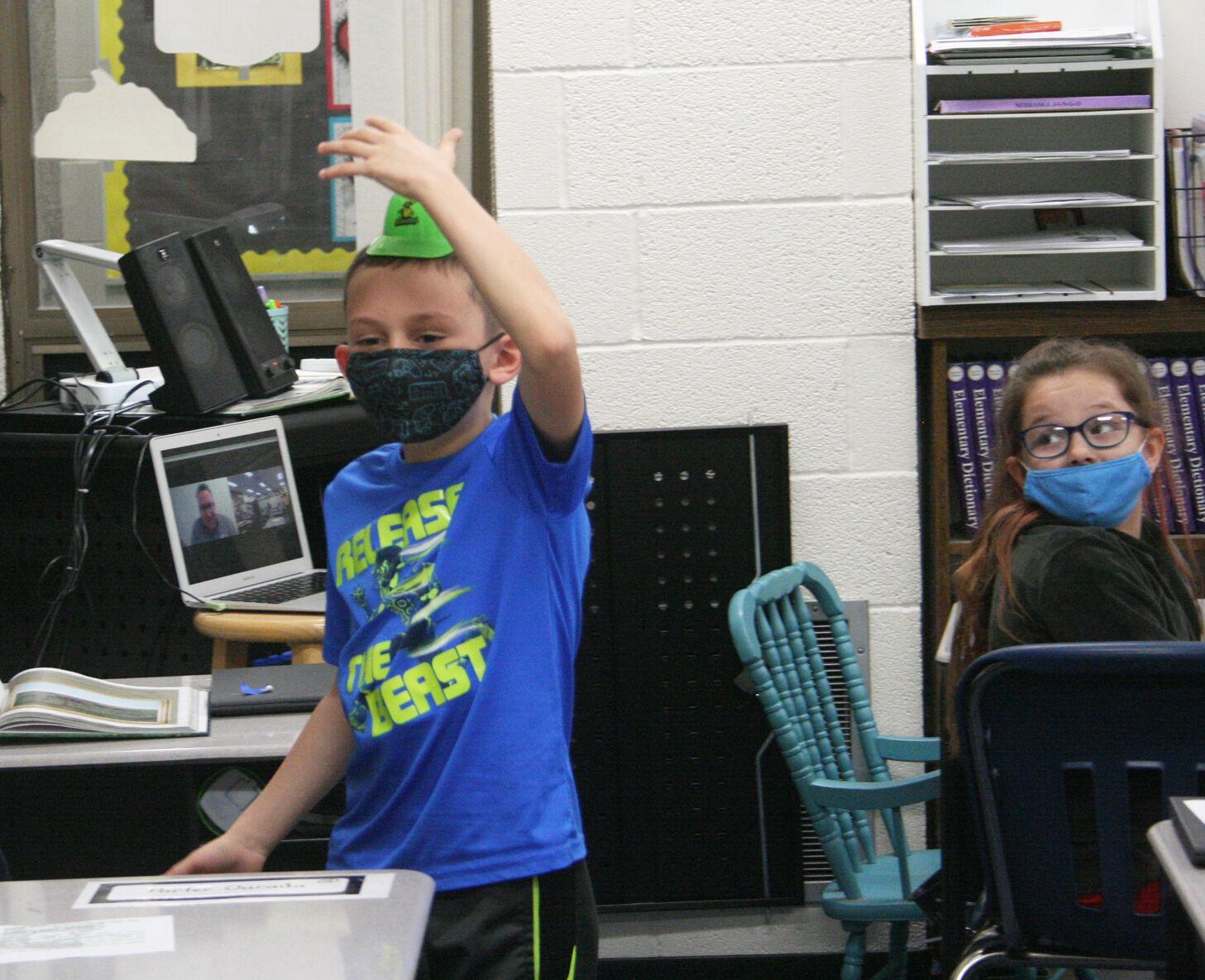 After discussing the early settlers and the way the baseball team tries to incorporate the state’s history, the kids got to ask the real, hard-hitting questions.

Is the mascot suit comfortable?

Why does he have a belt with the shape of the state of Nebraska on it? 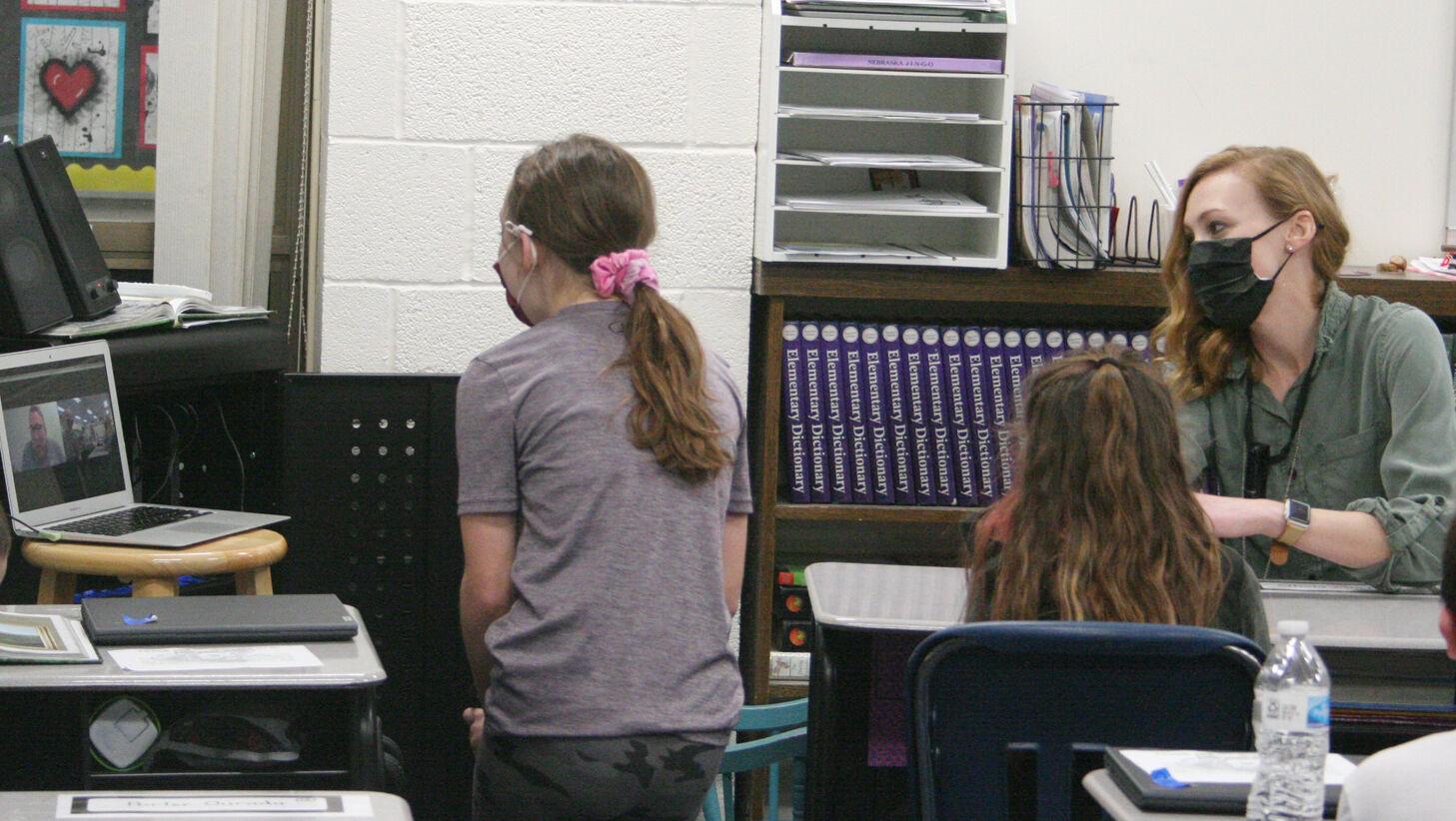 Why is there a bite in Buster’s hat?

Can Buster take his hat off?

Galusha didn’t dance around any of the questions, providing the kids in the classroom with entertaining insight on all things Buster. 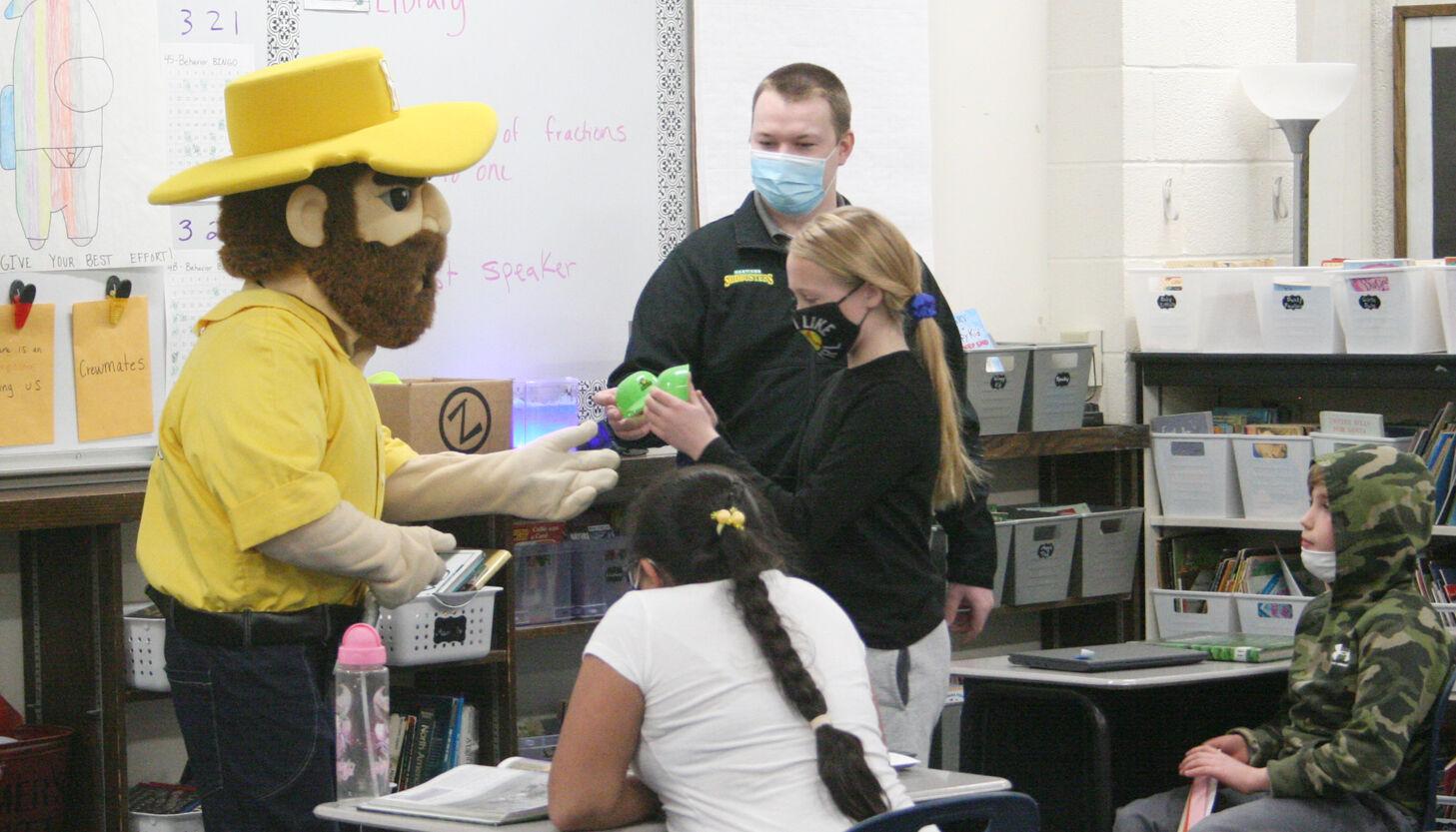 The team’s GM also talked about the team’s upcoming season, which is set to open May 24. He also extended an invitation to each student in the classroom and their families to attend opening night.

“The most important thing we do is continue to help the community and continue to have a place for kids and families to go and have a good time on a wonderful evening in Hastings,” Galusha said.