W ith several friends who had fun experiences with touring group bicycles in other cities, Dusty and Tess Perry were inspired to bring the business model to Hastings.

Joyride Pedal Co. was the 2022 Big Idea Hastings winner Nov. 1 at The Lark.

“We thought, ‘Why do you have to go somewhere else when you can do it right here?’ ” Tess said.

The couple got the idea for a touring group bicycle business before the pandemic began, but the thought of starting a business rekindled in April.

Joyride Pedal Co. was one of eight finalists to participate in the business pitch competition. Participants made 2-minute pitches in front of a panel of five judges and a capacity crowd inside The Lark.

“We didn’t know what to expect when we came in here, but we’re thrilled to actually win this,” Dusty said. “I think our idea’s really going to help Hastings.”

The Perrys anticipate startup costs to be about $85,000, including $75,000 for a 14-passenger group bicycle. The research process included locating a bicycle that didn’t belong to a franchise, understanding what is allowed on Hastings streets, learning the liquor license process and determining how to make the group touring bike a family-friendly activity.

After winning, Dusty and Tess were mobbed by about a dozen friends, who were enthusiastic supporters throughout the competition.

“We’ve got the greatest group of friends you could ask for,” Dusty said. “They’ve had our backs since day one. They’ve always supported us. They go everywhere we needed them to be. We won and they wanted to rush the stage. They had to control themselves a bit.”

The hope is to have Joyride Pedal Co. operational by the end of spring 2023.

Dusty said he is excited about working with Esch.

“It seems like it’s just going to start going faster now that Maggie’s going to help us,” he said. “It’s like our dream’s become more alive now just because we won this.”

The winners received $1,250 on Tuesday. There is another $1,250 after meeting with the professional partners, $1,500 after completing a business plan, and $1,000 once the business becomes operational in Hastings.

“Working with these finalists, bringing their ideas to fruition is truly the most fulfilling thing I could possibly do,” she said. “I love Hastings. I love the community. I love the people.”

The participants showed up on Tuesday ready to work, Esch said.

“All of these ideas are going to move forward some way, I just know it,” she said.

They said the additional funds will help their business, which has been in existence for about a year, get exposure.

“It will let people know what we can do,” Gabriel said. “Hopefully we can get some events to cater to.”

“It’s amazing,” Murphy said of the support she received during Big Idea Hastings. “There’s so many connections that I’ve already built here that are priceless.”

She hopes to have her first product launched by late spring/early summer 2023. She wants to attend farmers markets, build up e-commerce and have a trailer to sell baked goods and baked mixes.

Megan Arrington-Williams proposed establishing Mail BX, a process to create collaborative drawing projects between friends or family members through mail and turn that into an art piece.

The University of Florida’s board of trustees voted unanimously Tuesday to name U.S. Sen. Ben Sasse as the flagship school’s 13th president after weeks of growing criticism over his views on LGBTQ issues and a national search conducted largely in secret.

Sasse, a Nebraska Republican whose name emerged in early October as the sole finalist for the job, became the subject of protests and calls for action.

The trustees’ vote followed an impassioned opening statement by Sasse, who emphasized the university’s role in preparing students for a work world altered by “scary disruption” but one that presented “magnificent opportunity” for the university. Students graduating in May, he said, will change jobs or industries at least three times over the next decade, and the university needs to be better prepared to retrain people as they “boomerang back through our institution.”

Before that, Sasse faced 40 minutes of scathing public comment, with 10 speakers voicing their concerns over political influence on the university, the senator’s track record on LGBTQ issues and the lack of public involvement in the presidential search. Some pleaded for the board to reconsider.

“Normal universities don’t do this,” said Bryn Taylor, a UF doctoral student. “Once again political meddling has made UF the laughing stock of the academic community.”

Tara Ezzell, a graduate of UF’s College of Medicine and a Gainesville doctor, voiced her excitement for the choice, saying she had read Sasse’s book, “Them: Why We Hate Each Other — and How to Heal.” She said the senator offered a chance to “launch UF to even greater heights.”

Trustees Chair Mori Hosseini said the board was tasked with finding “a once-in-a-generation leader.”

An earlier statement by the university’s search committee called the UF president’s job “one of the most influential and impactful positions in all of public higher education and in the State of Florida.”

Outside Emerson Alumni Hall, where Sasse was interviewed by trustees, a swarm of protesters gathered outside a heavily barricaded space. The protests would continue if Sasse was confirmed, they said.

Meanwhile, concerns about his public stance as a Nebraska politician on same-sex marriage and his lack of experience at a major research university grew louder.

The board voted 13-0 to name Sasse after asking a range of questions: How would UF change with him in charge? What would he do to gain the trust of confidence of faculty and students who have criticized him? Would he be able to step back from politics? How would he address concerns of the LGBTQ community? What were his thoughts on academic freedom?

Sasse acknowledged his politics and the opposition he’s faced, but said he was looking forward “to a period of political celibacy.”

As president, he said, he would be consumed with being a “Gator superfan,” a dad and getting to know the details of a sprawling university. He said he didn’t see himself having the “bandwidth” for any partisan political activity.

Regarding speculation that his selection as finalist was engineered by Florida’s Republican leaders, Sasse said he has had no conversations with Gov. Ron DeSantis since DeSantis was a congressman. He said he was not shepherded through the process by any political figures, but rather by people on the search committee.

He said he hadn’t focused on UF until he was approached by Patel, the search committee chairperson, who recruited him using “a laundry list” of the university’s attributes.

He said he had two conversations with outgoing President Kent Fuchs about LGBTQ initiatives, and felt their records would be “indistinguishable” in that area. Fuchs, who would be an adviser to Sasse, has attended PRIDE welcoming events and adopted an initiative for gender-neutral messaging across the university.

“Everybody is created with infinite worth,” Sasse said, repeating words he used during his campus appearance on Oct. 10. He said the U.S. Supreme Court case that legalized same-sex marriage, which he had previously called “disappointing,” was law of the land and not something that would change.

Instead, he said, he wanted to focus on “all the stuff we have to do together.”

“We should be screaming we’re open for business,” he said.

He laid out a 12- to 18-month transition period, joking that his wife told him if he took the job he would have to get a tattoo that said “pacing.”

Before the trustees’ questioning, Hosseini and search committee chair Rahul Patel defended allegations that the search process was flawed.

They said search committee members contacted hundreds of “prospects,” with Patel speaking to 35 and some members of the committee spoke to 12. Each prospect told the committee they did not wish to advance in the process unless they were the sole finalist, they said.

Hosseini said he spoke with the external search consultant the university hired who advised the search would be adversely impacted if they released more than one finalist. Hosseini listed other top public universities who concluded their search with only one finalist.

After their vote, the trustees adopted a study that recommended Sasse’s salary should not exceed $1.6 million. Fuchs’ earns $1.4 million.

Sasse’s selection must be approved by the state Board of Governors, which is scheduled to meet in Tampa on Nov. 9 and 10. 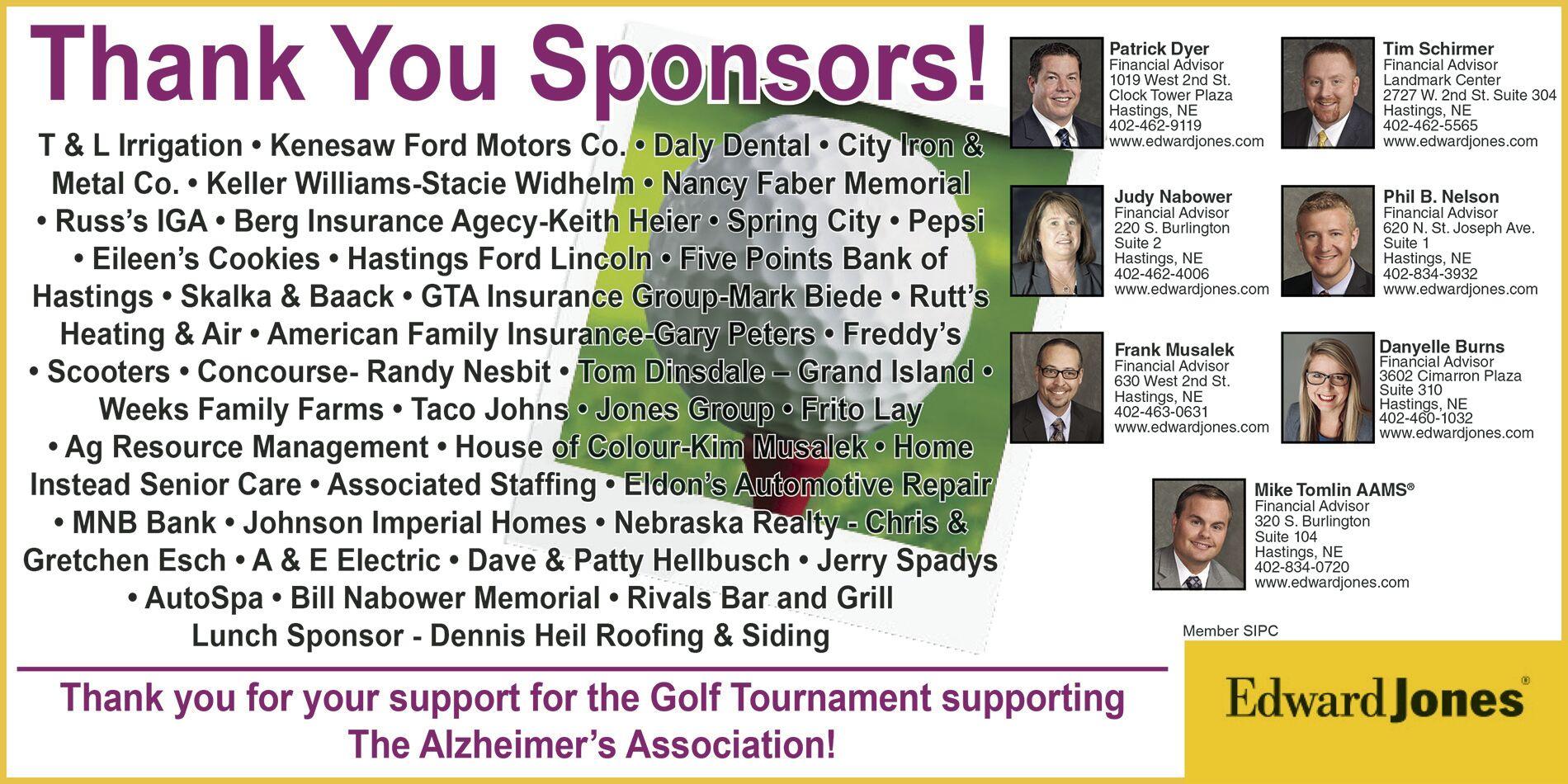 Members of the Adams County Board of Commissioners approved allocating $1.5 million in American Rescue Plan Act funds for county road projects, but some board members expressed a desire for more discussion about the fund allocation process.

Board members voted 7-0 at their regular meeting Nov. 1 to allocate the funds to be used primarily on a bridge project on Adams Central Avenue 1.5 miles north of Nebraska Highway 74.

County officials have been talking for several months about using ARPA funds for the Adams Central Avenue bridge project, or for repairs on 82nd Street, which feeds Cooperative Producers Inc.’s Hayland elevator near Prosser.

Zoning Administrator Judy Mignery, who also serves on the ARPA committee, said the focus should be the bridge on Adams Central Road.

“That needs to be done,” she said. “That has to be done. Let’s fix the broken stuff we have with this ARPA money and not create some new stuff.”

The bridge project has been estimated to cost a little more than $1 million. The Adams County Roads Department has allotted $200,000 in buyout funds from the state of Nebraska for the project.

“I don’t think there’s any question at all that the Adams Central bridge has to be done, without question,” Board Chairman Lee Hogan said. “That’s one of the largest travel roads.”

Funds remaining from the $1.5 million after the bridge project could be used toward costs associated with the 82nd Street project — currently estimated by the county’s engineering consultant to be around $2 million.

“I don’t feel like I’m up to speed on how the ARPA committee got to where they’re at,” he said. “I hate to vote on something I’m uncomfortable voting on and feel like I don’t have enough information.”

“I’ve asked more than once how much money has been voted on by this board to go ahead and distribute,” he said. “To this day, I have not gotten an answer.”