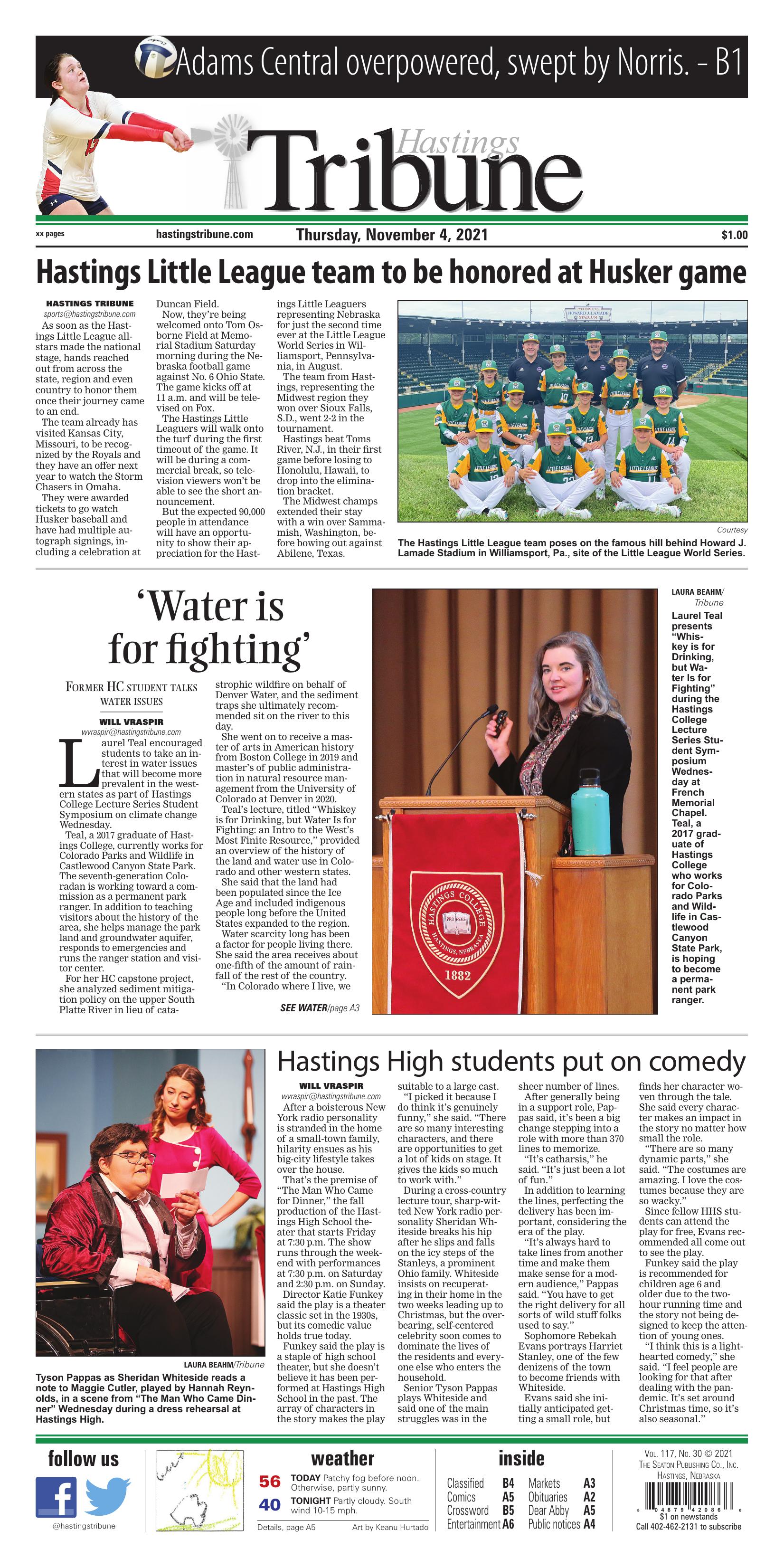 As soon as the Hastings Little League all-stars made the national stage, hands reached out from across the state, region and even country to honor them once their journey came to an end.

The team already has visited Kansas City, Missouri, to be recognized by the Royals and they have an offer next year to watch the Storm Chasers in Omaha.

They were awarded tickets to go watch Husker baseball and have had multiple autograph signings, including a celebration at Duncan Field in Hastings.

Now, they’re being welcomed onto Tom Osborne Field at Memorial Stadium in Lincoln Saturday morning during the Nebraska fame against No. 6 Ohio State.

The game kicks off at 11 a.m. and will be televised on Fox.

The Hastings Little Leaguers will walk onto the turf during the first timeout of the game. It will be during a commercial break, so television viewers won’t be able to see the short announcement.

But the expected 90,000 fans in attendance will have an opportunity to show their appreciation for the Hastings Little Leaguers representing Nebraska for just the second time ever at the Little League World Series in Williamsport, Pennsylvania, in August.

The team from Hastings, representing the Midwest region they won over Sioux Falls, S.D., went 2-2 in the tournament.

Hastings beat Toms River, N.J., in its first game before losing to Honolulu, Hawaii, to drop into the elimination bracket.

The Midwest champs extended their stay with a win over Sammamish, Washington, before bowing out against Abilene, Texas. 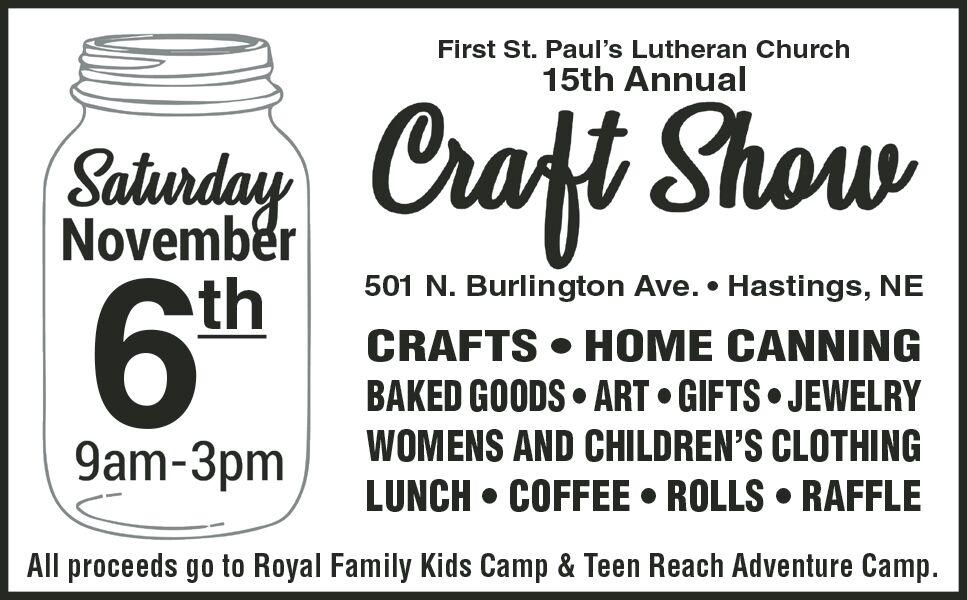 Tyson Pappas as Sheridan Whiteside reads a note to Maggie Cutler, played by Hannah Reynolds, in a scene from “The Man Who Came Dinner” Wednesday during a dress rehearsal at Hastings High.

Evan Strom as Sandy and Grayce Martin as June Stanley rehearse a scene from “The Man Who Came Dinner” Wednesday during a dress rehearsal at Hastings High.

Jake Braun as reporter Bert Jefferson interviews Sheridan Whiteside in a scene from “The Man Who Came Dinner” Wednesday during a dress rehearsal at Hastings High.

After a boisterous New York radio personality is stranded in the home of a small-town family, hilarity ensues as his big-city lifestyle takes over the house.

That’s the premise of “The Man Who Came for Dinner,” the fall production of the Hastings High School theater that starts Friday at 7:30 p.m. The show runs through the weekend with performances at 7:30 p.m. on Saturday and 2:30 p.m. on Sunday.

Director Katie Funkey said the play is a theater classic set in the 1930s, but its comedic value holds true today.

Funkey said the play is a staple of high school theater, but she doesn’t believe it has been performed at Hastings High School in the past. The array of characters in the story makes the play suitable to a large cast.

“I picked it because I do think it’s genuinely funny,” she said. “There are so many interesting characters, and there are opportunities to get a lot of kids on stage. It gives the kids so much to work with.”

During a cross-country lecture tour, sharp-witted New York radio personality Sheridan Whiteside breaks his hip after he slips and falls on the icy steps of the Stanleys, a prominent Ohio family. Whiteside insists on recuperating in their home in the two weeks leading up to Christmas, but the overbearing, self-centered celebrity soon comes to dominate the lives of the residents and everyone else who enters the household.

Senior Tyson Pappas plays Whiteside and said one of the main struggles was in the sheer number of lines.

After generally being in a support role, Pappas said, it’s been a big change stepping into a role with more than 370 lines to memorize.

In addition to learning the lines, perfecting the delivery has been important, considering the era of the play.

“It’s always hard to take lines from another time and make them make sense for a modern audience,” Pappas said. “You have to get the right delivery for all sorts of wild stuff folks used to say.”

Sophomore Rebekah Evans portrays Harriet Stanley, one of the few denizens of the town to become friends with Whiteside.

Evans said she initially anticipated getting a small role, but finds her character woven through the tale. She said every character makes an impact in the story no matter how small the role.

“There are so many dynamic parts,” she said. “The costumes are amazing. I love the costumes because they are so wacky.”

Since fellow HHS students can attend the play for free, Evans recommended all come out to see the play.

Funkey said the play is recommended for children age 6 and older due to the two-hour running time and the story not being designed to keep the attention of young ones.

“I think this is a lighthearted comedy,” she said. “I feel people are looking for that after dealing with the pandemic. It’s set around Christmas time, so it’s also seasonal.”

Laurel Teal presents “Whiskey is for Drinking, but Water Is for Fighting” during the Hastings College Lecture Series Student Symposium Wednesday at French Memorial Chapel. Teal, a 2017 graduate of Hastings College who works for Colorado Parks and Wildlife in Castlewood Canyon State Park, is hoping to become a permanent park ranger.

Laurel Teal presents “Whiskey is for Drinking, but Water is for Fighting.” during the Hastings College Lecture Series Wednesday at French Memorial Chapel.

Laurel Teal encouraged students to take an interest in water issues that will become more prevalent in the western states as part of Hastings College Lecture Series Student Symposium on climate change Wednesday.

Teal, a 2017 graduate of Hastings College, currently works for Colorado Parks and Wildlife in Castlewood Canyon State Park. The seventh-generation Coloradan is working toward a commission as a permanent park ranger. In addition to teaching visitors about the history of the area, she helps manage the park land and groundwater aquifer, responds to emergencies and runs the ranger station and visitor center.

For her HC capstone project, she analyzed sediment mitigation policy on the upper South Platte River in lieu of catastrophic wildfire on behalf of Denver Water, and the sediment traps she ultimately recommended sit on the river to this day.

She went on to receive a master of arts in American history from Boston College in 2019 and master’s of public administration in natural resource management from the University of Colorado at Denver in 2020.

Teal’s lecture, titled “Whiskey is for Drinking, but Water Is for Fighting: an Intro to the West’s Most Finite Resource,” provided an overview of the history of the land and water use in Colorado and other western states.

She said that the land had been populated since the Ice Age and included indigenous people long before the United States expanded to the region.

Water scarcity long has been a factor for people living there. She said the area receives about one-fifth of the amount of rainfall of the rest of the country.

“In Colorado where I live, we get about 13 inches per year, if we’re lucky,” she said.

She said people stayed close to cities because water was crucial to survive, whereas other regions allowed people to settle and farm in rural areas.

As Americans expanded west, Teal said there was a concept of people going out to conquer the land. She said the European way of thinking brought to the task was to change the land from wild to settled, but the differences created by the reality of water scarcity wasn’t realized until later.

“In reality, there’s no way to separate the city from nature,” she said.

Through various water compacts, the affected states have worked to gain control of water rights for rivers in the area.

“States found themselves in court arguing about water rights regularly,” she said.

When she was in school, Teal thought the main need was to come up with new ideas about water management.

“Now that I’m actually in the field, I realize what people are in need of is conflict resolution,” she said. “The biggest thing is we’re all in this together. What Colorado does will impact Nebraska… I think it all comes down to working with neighbors, even if the issues are different.”

She encouraged students to consider study of groundwater, especially given the proximity of the Ogallala Aquifer.

Following the presentation, Teal said she wanted to change the perspectives of students looking at the issue.

“I hope to spark some interest in groundwater as a solution so they can put their bright young minds to work,” she said.

Teal was one of six speakers at the symposium, which included both in-person and virtual presenters.

A sustainability fair was held in the Hazelrigg Student Union where local businesses and others promoted environmentally conscious and community friendly products and more.

The event culminated with a panel discussion between Hastings College’s faculty and event attendees, explaining their work in relation to the many fields of climate change.